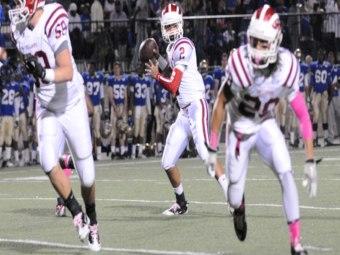 The Hillgrove Hawks looked like they had weathered the storm from West Forsyth when Kenyan Drake returned a kick for a score late in the second quarter for a tie-breaking touchdown. West Forsyth would regroup at halftime and hold Drake to under 40 yards for the game in a 40-28 victory to end Hillgrove’s season. Drake did total three scores for the game. Blake Roberts led the Wolverines with 111 yards rushing. Kell managed to dent the scoreboard against Lovejoy, but it was the Wildcats that ruled the day 15-10.

Kell fumbled away a screen pass which led to a Lovejoy score. The defense would force another Kell fumble late in the game. ... Pope was thumped 35-0 by Tri-Cities when Oscar Ross passed for a score and ran for another. The Bulldogs scored early on a Xavier Robinson 80-yard score. The defense also forced four turnovers.

ML King was down a touchdown and running out of time when Jonquel Dawson hit Cornell Boyd for a 31-yard score to force overtime. In the extra frame, Dawson found Blake Tibbs for the 27-21 game-winning score. Dawson had three scores and 352 yards in the win. ... Dacula dumped Newnan 32-21 thanks to a pair of Marcus Cox scores as well as one from Rocky Capobianco.

Walton advanced to the next round with a 42-7 win over South Cobb. Tyren Jones scored four times in the first half and recorded five total touchdowns for the Raiders. ... St. Pius X jumped out to a 24-0 halftime lead before rolling on to a 31-6 victory over Henry County. Ryan Braswell contributed 153 yards and three scores on 23 carries. Aaron Avant picked off two Henry County passes. ... Miles Jones scored two touchdowns which would be enough for Allatoona to advance past Mary Persons 14-7.