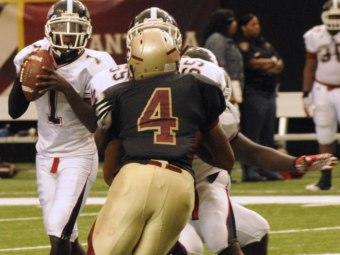 Thomas County Central pulled what many will call the upset of the night with a 31-28 double-overtime win over Class AAAA No. 2 Statesboro. The No. 4-seeded Yellow Jackets had lost four regular season games including their last two of the year prior to last night. Statesboro, meanwhile, was fresh off completing an undefeated regular season. A 23-yard Gavin Wilson field goal in overtime won the game for TCC. After falling behind 7-0, the Jackets scored three straight touchdowns to lead 21-7. ... No. 1 Camden County showed its physicality in a 34-0 domination of visiting North Cobb. The Wildcats rushed for 339 yards in the win. The Warriors trailed just 14-0 at the half. .... South Cobb won its first playoff game since 1959 in a 33-28 victory at Windsor Forest. The Eagles trailed 28-13 in the third quarter before scoring the game's final 19 points. A win would have been the Knights' first postseason triumph ever.

Clarke Central will face No. 3 Northside-Warner Robins in an interesting second-round matchup in Class AAAA. The Gladiators edged Lambert 35-32 last night to advance while the Eagles cruised past Glynn Academy 42-16. The two programs were traditional powers in the state's highest classification before being sent to Class AAAA. Central and Northside have combined to win five state titles.

Class AAA No. 7 Peach County caused six Worth County turnovers in a 36-7 romp. ... No. 6 Gainesville profited from 425 total yards by QB Deshaun Watson in its 48-27 win over Dalton. The Catamounts were not your every-day No. 4 seed, as they had to forfeit four games during the regular and plummeted to fourth place in their region as a result.

Mary Persons got its first postseason win since 2005 with a 54-20 win over Americus-Sumter. ... Class AA No. 3 Carver-Columbus dominated visiting Lovett 38-7 after leading 26-0 at the half. The Tigers ran for 354 yards while holding Lovett just 33 rushing yards. ... Bremen sent First Presbyterian home 43-28, ruining the Vikings' hopes of winning their first-ever GHSA playoff game. ... Class A No. 1 Savannah Christian held Dooly County to minus-10 yards of total offense in a 37-0 win.