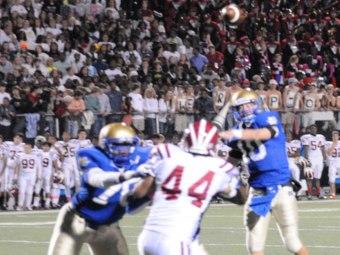 Brookwood lost a 10-point lead, but managed to pick up a road victory over Peachtree Ridge 30-27. Diandre Atwater ran for 301 yards and three scores for the Lions, but it was not enough as B.J. Sammon scored the game-winning touchdown in overtime. Sammon had two earlier scores for the Broncos. ... Lassiter needed overtime, but managed to end Alpharetta’s dream season 17-16 in overtime. Eddie Printz rallied his Trojans back from a 10-0 hole, finding Willie Police from five yards out in the second quarter and then hooking up with Jawan Dickey in overtime. Jalen Simmons had two touchdowns in the game but Niles Clark of Lassiter blocked Lehman Howlington’s extra-point attempt, giving Lassiter the victory.

Dacula managed to avenge its season-opening loss to Norcross with a 17-10 victory over the Blue Devils. ... Marietta is now over .500 after beating Centennial 48-27. The Blue Devils received a huge effort from quarterback Anthony Jennings, who passed for four scores and ran for two more while tallying 361 yards of total offense. ... Yusuf Minor racked up 192 rushing yards and had scoring runs of 80 yards and 79 yards in Tucker’s 44-14 win over Sprayberry. The Tigers also received two touchdowns apiece from Dallas Rivers and Juwaan Williams.