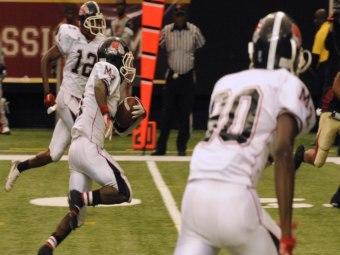 Stephenson fell to ML King Friday night in a dramatic affair in Stone Mountain. Despite having a solid 9-1 regular season, the Jaguars were rewarded by finishing second in their region and will have to face Region 1-AAAAA power Lowndes in the first round. It should be a doozy of a game and is one of the best matchups in the first round. … No. 3 Statesboro topped Ware County to win the Region 2-AAAA title. The Blue Devils will take on traditional power Thomas County Central in the first round.

In Region 8-AAAA, Clarke Central’s upset win over Flowery Branch throws the region into a tizzy. Now, the Gladiators, Falcons and Heritage-Conyers are tied for first place and will have a coin toss tomorrow to determine the playoff seedings. It would be a dubious honor for whoever gets first seed, as a tough Rome squad awaits. The Wolves nearly upset defending Class AAAA state champion Chattahoochee last night.

Peach County reclaimed their turf in middle Georgia by beating Baldwin 17-14 in what was essentially the Region 2-AAA title game. The Trojans will now take on Region 1 No. 4 seed Worth County in the first round. Meanwhile, the Braves will host No. 3 seed Monroe. … In a bit of a shocker, Burke County dominated Thomson 31-8 to win Region 3-AAA. It was not a surprise that the Bears won the game, but by how much they won it by. Both teams had steamrolled opponents coming into Friday night, aside from Burke County’s loss to Lowndes early in the year. But the Bears had no problem at all with their region rivals.

In Class A, defending champion Clinch County has been relegated to the three seed from its own region a year after dominating the state. The Panthers fell to Charlton County last night and will face a tough Mitchell County squad in the first round. Charlton earned the No. 2 seed from Region 2-A and will take on Miller County.