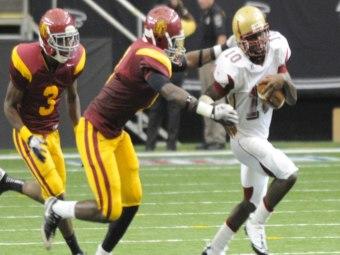 The Score 44 is a fluid list that aims to honor the best forty-four seniors in Georgia high school football on a week-to-week basis. These players are some of the most highly-recruited players in the state as well as some of the best players that may not get to play at the next level. TJ Moon makes the list this week after yet another outstanding game with Stephenson. Moon has been in Mike Davis’ shadow for most of the year but finally makes the list after rushing for 103 yards on 13 carries, including two scores. This is Moon’s first year with the Jaguars. Meanwhile Kyle Sloter has been on the “just missed” list for several weeks before finally making the list. Sloter is perhaps the most overlooked prospect in all of Georgia and the signal-caller will head to Tulane next year. Sloter has been hotter for most of the year than Greyson Lambert, headed to Virginia.