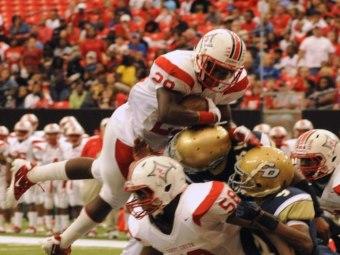 No. 5 Fitzgerald rolled past No. 6 Brooks County 39-0 in a shocking blowout. In what was supposed to be a hard-fought battle for the Region 1-AA supremacy, the visiting Purple Hurricanes dominated from the onset. … North Oconee upset No. 8 Elbert County 17-6 and clinched the Region 8-AA South championship, its first division title in school history. The Titans take on Banks County next week for the region title.

Prince Avenue Christian won its first region title in six years of GHSA football by beating Athens Christian 29-14. The Wolverines have a game next week against Riverside Military Academy. With a win, they will complete a perfect 10-0 regular season. … Mary Persons defeated Westside-Macon 20-17 to earn a playoff spot from Region 2-AAA. Head coach Rodney Walker earned his 300th win in the process. It is the Bulldogs’ first playoff berth since 2008. … Speaking of Westside-Macon, the Seminoles face Perry next week for the fourth and final playoff spot from Region 2-AAA.

Lowndes earned a playoff spot with a 21-0 win over Tift County. The Vikings were in danger of missing the postseason for the first time since 2006 after losing their first two region games, but are now assured of a playoff bid. In light of Colquitt County’s run to the state finals last season despite getting the No. 4 seed out of Region 1-AAAAA, anything can happen for a talented squad like Lowndes. … Colquitt County inched closer to its first region title since 1999 with a 38-14 win over Coffee. Rush Propst’s squad plays at Valdosta next week for a chance to finish their first undefeated season in region play since 1994.

Harris County beat slumping Starr’s Mill 28-21 to add even more gloom to the Panthers’ season. A year after winning its first 14 games, Starr’s Mill is now on the verge of missing the playoffs altogether. Meanwhile, the Tigers can earn a berth in the playoffs with a win in the region play-in game next week.