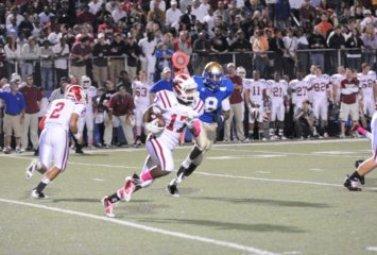 The Score 44 is a fluid list that aims to honor the best 44 seniors in Georgia high school football on a week-to-week basis. These players are some of the most highly-recruited players in the state as well as some of the best players that may not get to play at the next level. Two players reappear on the list as this week’s additions.

Chaz Elder of Banneker has incredible size for a defensive back that you would think he would naturally be a safety. He has the speed though to play cornerback and several SEC and ACC teams are targeting him to play either. His 6-foot-2 size would allow him to be physical with any wide receiver in the country. Meanwhile Alabama pledge Dakota Ball accepted his 2012 Under Armour All-American jersey and game invitation as Ball has shown he could be Nick Saban’s next stud defensive lineman. This is Ball’s second appearance on the 2011 Score 44.