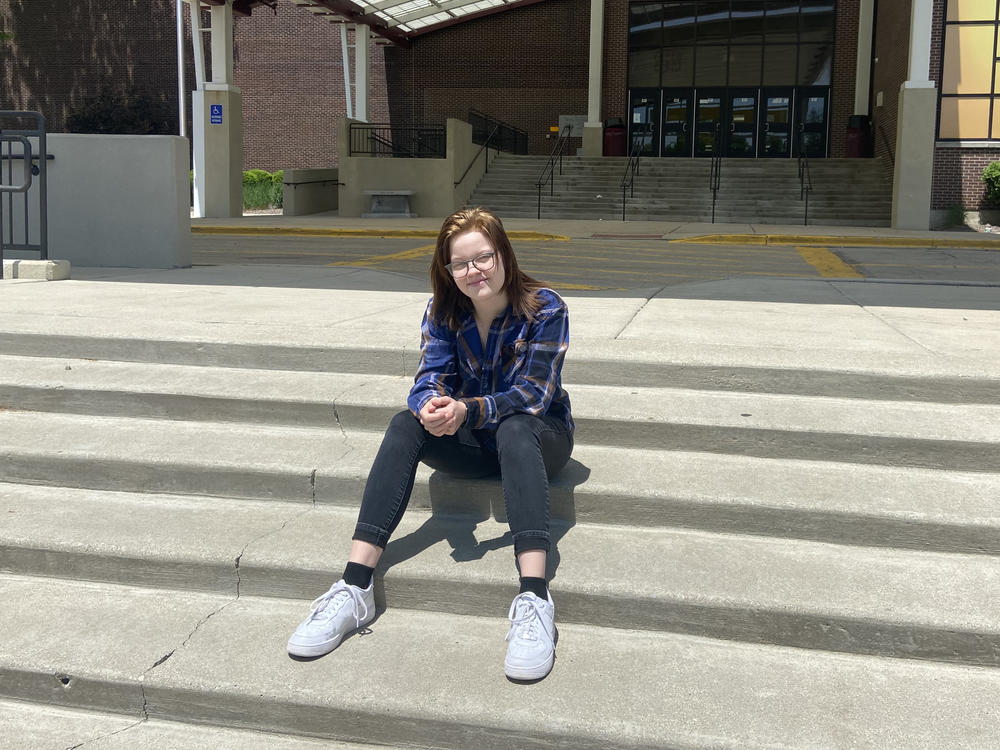 Linnea Sorensen attends Schaumburg High School in Schaumburg, Ill. Now that Illinois allows students to take up to five days off per school year for their mental health, she can stay home when she feels "not fully mentally there." / Kaiser Health News

Linnea Sorensen falls into a funk whenever her girlfriend of four years leaves for her six-month stints with the Marines, and the high school junior has trouble concentrating on her classwork.

"I'm somebody who struggles with my mental health quite a bit," said the 17-year-old, who attends school in Schaumburg, Ill., a suburb of about 77,000 people northwest of Chicago. "When you're in school and not fully mentally there, it's like you're not really grasping anything anyway."

Now Illinois is giving Sorensen and students like her a new option for dealing with mental health lows. The state allows K-12 students in public schools to have five excused absences per school year for mental health reasons, another example of the growing acknowledgment among lawmakers that emotional and physical health are intertwined. The new policy, which went into effect at the beginning of 2022, passed both chambers of the state legislature unanimously.

But such novel policies are, in many ways, a half-step toward addressing the crisis of teenage mental health that has been highlighted and exacerbated by the educational interruptions caused by the pandemic. Many parts of the country are woefully short of therapists who can work with students to address mental health problems.

Nearly half the nation lives in a designated mental health worker shortage area, according to government data, and an estimated 7,550 new professionals are needed to fill that void nationwide. Even in places where mental health professionals are more plentiful, they often do not accept public insurance, making them inaccessible to many kids.

In other states where lawmakers have implemented policies that allow students to take mental health days — including Arizona, California, Colorado, Connecticut, Maine, Nevada, Oregon, Utah and Virginia — a lack of services for young people remains a concern.

Schools in Colorado, Indiana, Maryland, Utah and Washington, D.C., have tried to narrow the gap through less costly solutions, such as in-class meditation, mindfulness rooms and social-emotional learning. The latter became a curriculum target of conservative lawmakers in recent months.

In a 2020 Mental Health America survey of young people's greatest mental health needs, the top responses from 14- to 18-year-olds were access to mental health professionals and mental health absences or breaks as part of school or work.

"The more we can shift to a prevention mindset and integrate mental health promotion into schools from a young age, I see that as very key to helping reduce the needs for treatment that we see in young people," said Tamar Mendelson, director of the Center for Adolescent Health at the Johns Hopkins Bloomberg School of Public Health.

Education officials and mental health experts in Illinois say the mental health day policy is a good start toward tamping down a youth mental health crisis that had been growing during an era of school shootings and cyberbullying and then exploded during the pandemic. The move is another indication that schools are increasingly being relied upon to meet students' social needs, from feeding, clothing and vaccinating them to spotting abuse and neglect.

"I've been a teacher for 19 years, and this is as bad as I've seen it," Ben Lobo said of the mental health of his students at Schaumburg High School.

Susan Resko, president and CEO of the Josselyn Center, a community mental health center north of Chicago, said the pandemic was "like putting a match to fuel."

Before March 2020, the nonprofit received about 50 new clients a month, Resko said. That number is now 250, and two-thirds are children or young adults. The organization hired 70 therapists in the past year and has received an influx of requests for mental health counseling services from local schools.

Some critics of the new Illinois law note that it excludes families that don't have ready access to child care. And a lack of data from some schools means officials don't know whether the policy is being used.

The Illinois State Board of Education does not require schools to report how many students are taking mental health absences. KHN contacted the 10 largest school districts in Illinois seeking that data. Six didn't respond (the districts based in Elgin, Aurora, Algonquin, Oswego, Romeoville and Schaumburg), and three said they either aren't tracking that number (Chicago) or couldn't release it (Rockford and Naperville).

School officials in Plainfield, Ill. — a town about 35 miles southwest of Chicago whose district has an enrollment of more than 25,000 — said 3,703 students took a combined 6,237 mental health days from early January through the end of the school year. That means nearly 15% of the student body used an average of 1.7 days per student. Officials also noted that 123 of those days were used on the last day of school before summer break.

The community had been seeking to provide more services to students even before the pandemic hit. In 2019, Plainfield Community Consolidated School District 202 added 20 social workers after data showed that overnight hospitalizations of any kind among students had more than doubled in the previous five years. That type of staff expansion just "doesn't happen in education," said Tim Albores, the district's director of student services.

No money, no staff

Under the state's new policy, after students have a second mental health-related absence, district officials are required to refer them to the "appropriate school support personnel." But many schools can't afford the types of services Plainfield is offering, education officials say, and in rural areas they sometimes have trouble finding people to fill those jobs.

Chicago isn't scheduled to have a social worker in each of its more than 600 schools until 2024. School social workers there often devote most of their time to students who receive special education services dictated by an individualized education program, or IEP.

Fourteen-year-old Heaven Draper, an eighth-grader at Brian Piccolo, said she had used two mental health days: one to take a break from a chaotic classroom environment — she said she sometimes feels more like a teacher than a student — and another to de-stress from the pressures of applying and testing for high schools in the city. "This is our first year back in person from quarantine," she said. "It's gotten overwhelming at times."

Her classmate Ariyonnah Brown, 14, said she took a day to help defuse a situation with another student. She said she'd like to see more awareness of mental health among adults, especially in communities of color like hers.

"Parents need to be educated," said Sheila Blanco, 57, a food distribution purchaser from Chicago whose 14-year-old daughter, Carli, died by suicide in 2017. "So many parents, they don't know what resources are, and even if there are resources, to help out the child or help them to help the child."

Anna Sanderson, a Schaumburg High School junior, said she believes the policy is a good idea, just not for her. "If I miss a day because I'm overwhelmed or not feeling well mentally, I feel like when I go back, I'll only be worse," the 17-year-old said. "I'll have to make up assignments and tests and be behind in my classes."

But she said she hopes it's a sign of greater support for students' mental health. She said schools sometimes fail to acknowledge student suicides or to provide counseling that goes much beyond education.

"I feel like we get dismissed a lot of the time," she said. 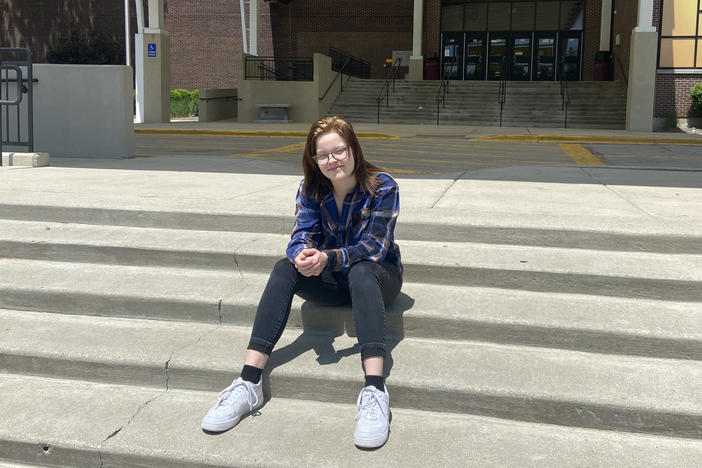 While a growing number of states are trying to address the increasing mental health crisis among youths, many schools are woefully short of therapists and the budget to hire them. 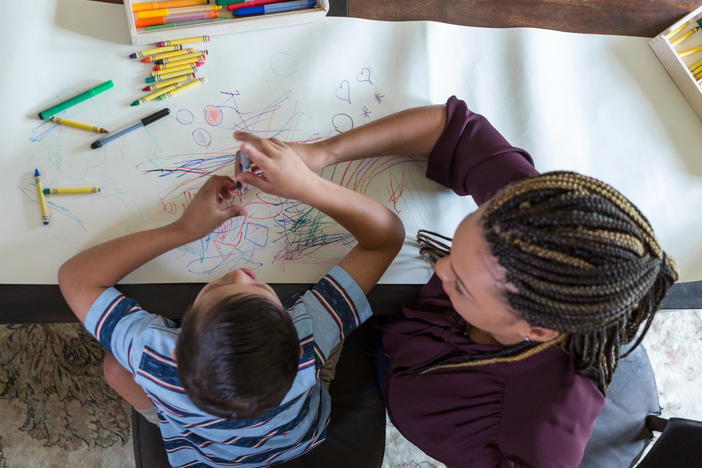 Two years of disrupted schooling and limited social contact have been tough on kids. A new report calls out states that do a good job supporting kids' mental health at school — and those that don't. 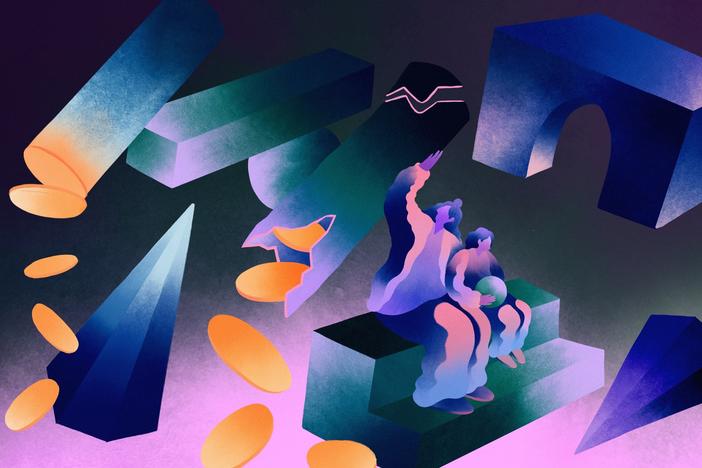 A youth mental health crisis and a shortage of therapists and other care providers who take insurance are pushing many U.S. families into financial ruin. But it's rarely acknowledged as medical debt.