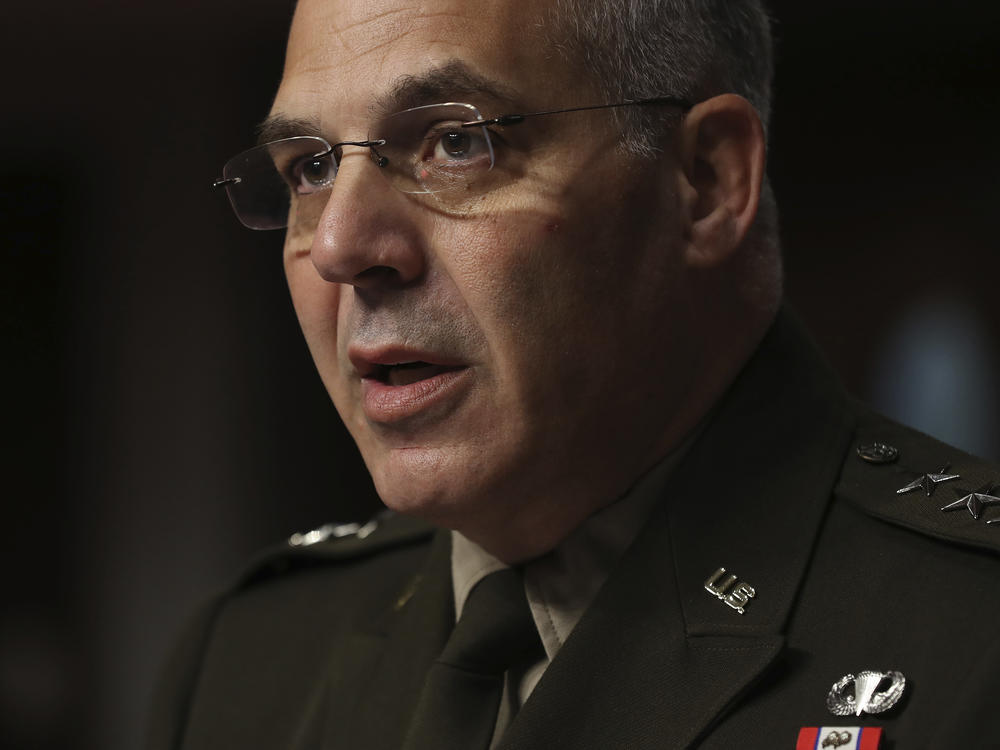 Gen. Gustave Perna tells NPR that if a safe and effective COVID-19 vaccine is approved by the Food and Drug Administration in December, "10 to 30 million doses of vaccine will be available that we can start distributing" in the United States. / AP

A top U.S. Army general who is co-leading the federal COVID-19 vaccine initiative anticipates that the first of millions of Americans could start receiving COVID-19 vaccines as soon as next month.

Perna is chief operating officer for Operation Warp Speed, the government's initiative to fast-track the development, manufacture and distribution of COVID-19 drugs and treatments. In May, he was appointed to co-lead the project, along with the initiative's chief science adviser, Moncef Slaoui.

Perna's remarks followed an announcement earlier Monday of promising developments about a COVID-19 vaccine developed by the drug company Pfizer. Early results suggest that the vaccine is more than 90% effective in preventing COVID-19. "Great [news] to wake up to today," he said.

"When we talk 'vaccine effectiveness,' what we're talking about is, 'How effective was the vaccine at preventing actual disease?' " scientist L.J. Tan, chief strategist of the nonprofit Immunization Action Coalition, explained to NPR's Allison Aubrey in September.

In other words, by that definition, if you vaccinated 100 people, at least 90 people would not get the disease, if these early results from Pfizer hold up.

Being prepared to have large quantities of the COVID-19 candidate vaccines ready for distribution as soon as one is authorized as safe and effective by the FDA has been a major feat of planning and coordination that runs counter to the typical drug and vaccine development process.

"Generally, you don't start manufacturing a vaccine until you have an [approval]," Perna explains. But waiting for an OK from the FDA before ramping up production would have greatly prolonged the timeline for getting a COVID-19 vaccine out to the public.

So early on, the Operation Warp Speed team invested in manufacturing capacity. "We needed brick and mortar," Perna says. "We needed trained employees. We needed to have all the materials, and we needed very technical machinery to produce the vaccine."

"We started executing manufacturing requirements in parallel with the development and the trials of the vaccines," he says.

Simultaneously pursuing processes that typically happen one after another is a resource-intensive, high-risk strategy. It's possible that some pre-manufactured vaccine candidates will not be found to be safe or effective and that those vials would need to be thrown out. But the strategy makes it possible for some vaccine doses to be available as soon as a vaccine is authorized — and for vaccine production to scale up quickly after that.

If a vaccine is in hand in December, availability "will expand rapidly in January, February, March, April," Perna told NPR, describing a "steady cadence" of vaccine rollout that could result in most Americans getting access to a shot by mid-2021.

A four-star general, Perna previously served as the commanding general for the U.S. Army Materiel Command, which manages the Army's global supply chain. "I'm a professional logistician. That's what I've been doing for 39 years," he says.

The military is coordinating the vaccine distribution but will not play a direct role in moving or injecting vaccines on the ground, according to Perna. "We're partnering with commercial industry to do the actual distribution, because they know how to do it," he says, "They do it every year, with influenza and other medications and vaccines."

Pfizer has an assembly center in Kalamazoo, Mich., and plans to use private carriers such as UPS and FedEx to deliver vaccines to hospitals and vaccination sites. Vaccines from Moderna and other Operation Warp Speed candidate vaccines would likely be moved by the medical supply company McKesson, which has a contract with the government to distribute COVID-19 vaccines.

The government will be allocating initial vaccine supplies to states and jurisdictions, which will then be responsible for getting shots into people's arms and determining which groups get priority for those first doses. "Some of the jurisdictions have thought about mass [vaccination] campaigns. Some are going right to brick-and-mortar and working with CVS and Walgreens. Some are going to utilize their hospitals," and the places people can go to get vaccines may shift as more doses become available, Perna says.

Perna says he hasn't heard from President-elect Joe Biden's transition team yet but played down suggestions that a change in administration could complicate the work. "I believe that the mission we have — to develop, manufacture and deliver safe and effective vaccines — is moving in the right direction," Perna says. "And I am just going to keep my head down and drive to that and keep going."

From Delaware, Biden met with his newly formed COVID-19 advisory board Monday morning. In remarks after the meeting, he warned Americans to brace for "a very dark winter," despite the good news that Pfizer's vaccine seems to be effective, pending further tests.

"The projections still indicate we could lose 200,000 more lives in the coming months before a vaccine can be made widely available," Biden said, imploring Americans to wear face masks in public. Until nearly everyone has been vaccinated, he said, "a mask remains the most potent weapon against the virus." 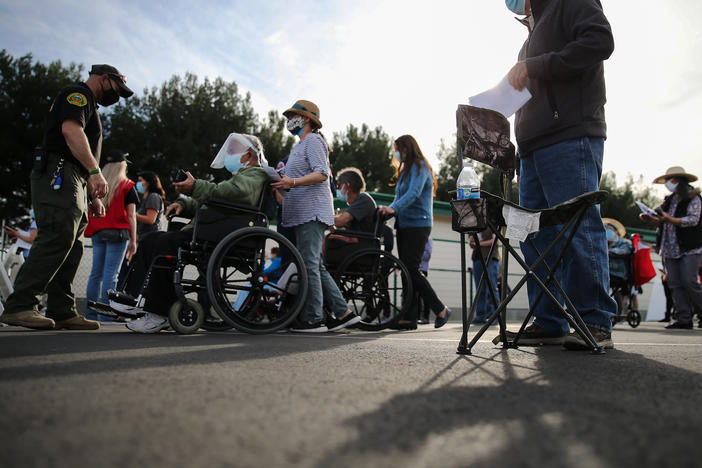 As states suddenly expand the categories of people eligible for the first scarce shipments of vaccine, who will be watching to make sure those hit hardest by the pandemic aren't left behind? 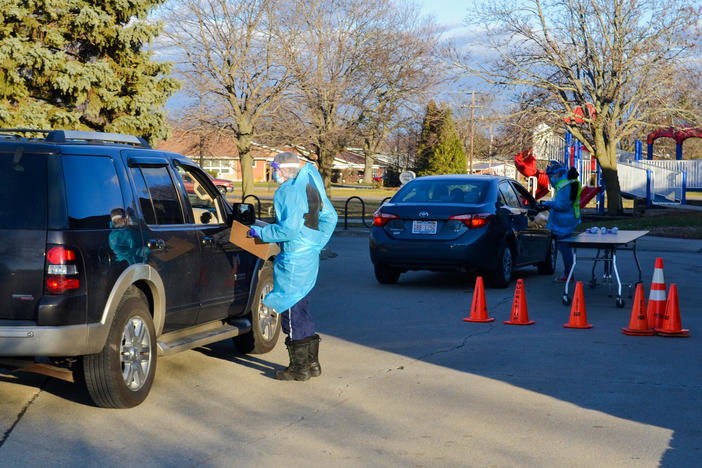 To Help Farmworkers Get COVID-19 Tests And Vaccine, Build Trust And A Safety Net

Getting COVID-19 tests and vaccine to essential workers on commercial farms and in meatpacking plants requires more than a pop-up clinic miles away. A positive test can be financially devastating. 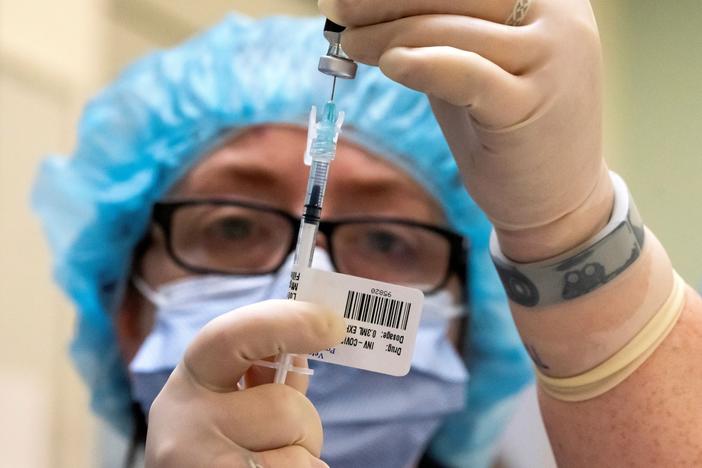 Without Resources, Vaccine Rollout Could 'Fall At The Last Hurdle,' Journalist Warns

Atlantic writer Ed Yong says the COVID-19 vaccination program will be the most complicated the U.S. has ever attempted: "It's going to be a slow process, and there are a lot of possible roadblocks."