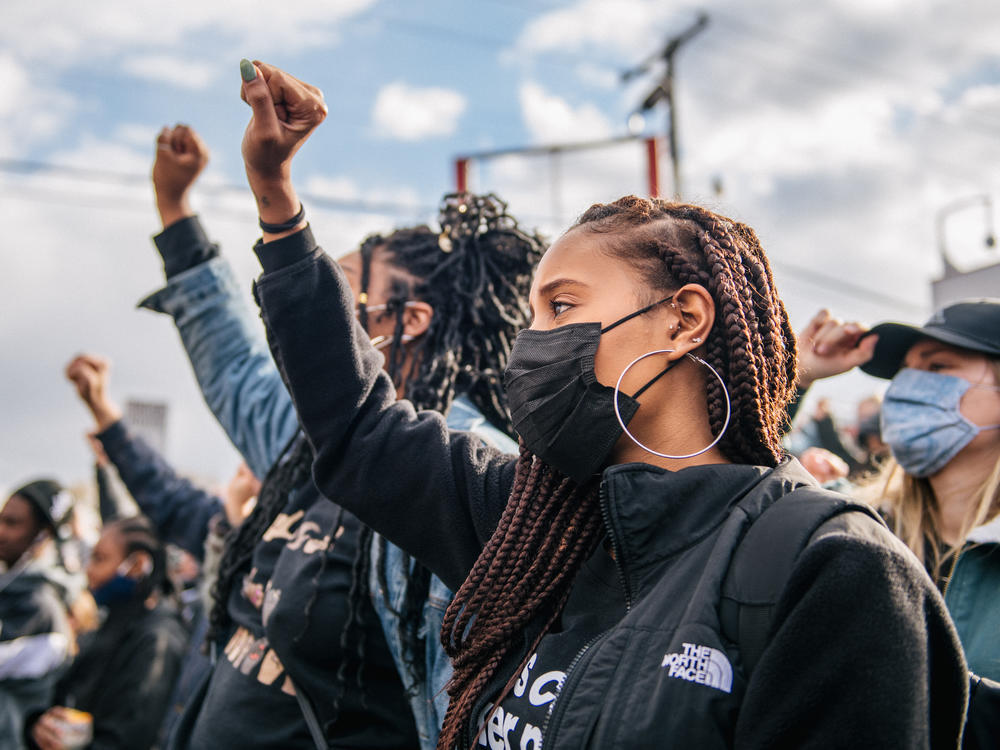 People gather at George Floyd Square in Minneapolis. On Tuesday, police officer Derek Chauvin was found guilty of two murder charges and one manslaughter charge in the death of George Floyd. / Getty Images

Scenes of joy and relief erupted across the country after a jury found Minneapolis police officer Derek Chauvin guilty of murder in the death of George Floyd.

Yet simultaneously in several cities, the celebratory mood was tempered by a sense that the verdict represented just a small degree of accountability in a greater fight against racial injustice and police violence.

Here's a glimpse at how people nationwide are processing Tuesday's verdict.

In George Floyd Square — a memorial site dedicated to Floyd and the intersection where Chauvin pinned down the 46-year-old Black man for nearly 9 1/2 minutes — crowds burst into cheers as soon as the first guilty verdict was delivered.

By the announcement of the third count, B.J. Wilder, 39, had dropped to his knees, tears flowing down his face.

"It's a new day in America," he said. "Everybody saw it. But still you're sitting, thinking back to the Rodney King days — everybody saw that too — those cops got off."

"I was really worried, I was worried about my city. Thank God my city will not burn tonight," he said. "Finally, some little piece of justice."

Floyd grew up in Houston, where many of his family members still live.

Near a mural dedicated to Floyd in the city's Third Ward — where he lived with his mother and siblings — friends and community members were quietly celebratory, saying they were grateful for the verdict but still grieving that Floyd was murdered. 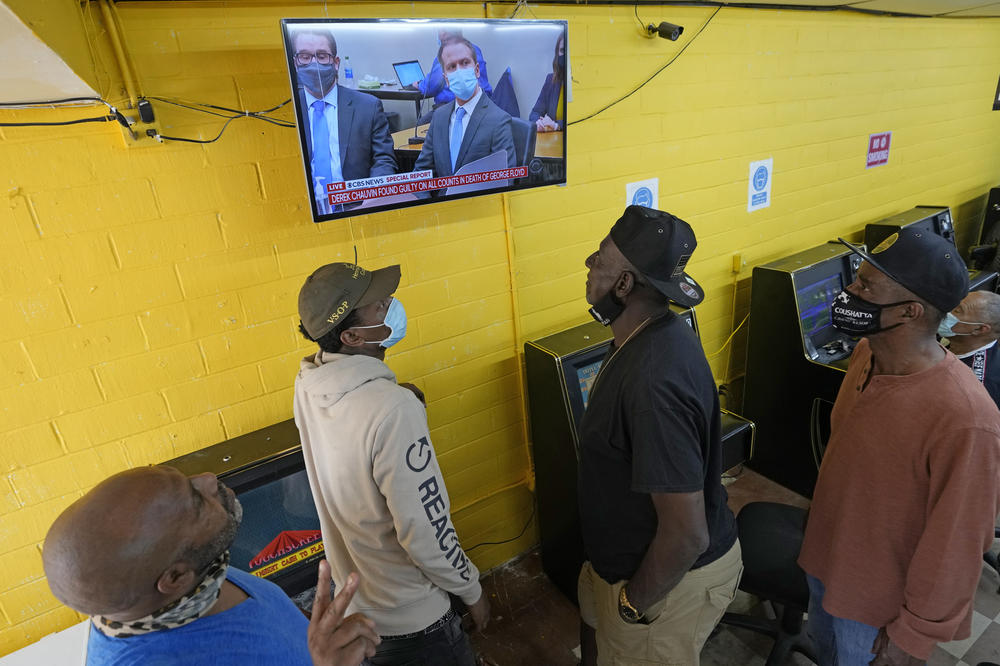 People gather inside a convenience store in the Houston neighborhood where George Floyd grew up to listen to the verdict in the murder trial of Derek Chauvin. / AP

Larry Masters, 60, said he had doubted the jury would return a guilty verdict.

"It's a blessing," he told Houston Public Media. "Justice was served today. Because this is a long time coming. They've been doing this for years and years and years. From generation to generation. We've been screwed over, we've been mistreated. I mean, they just been getting away with crime."

Growing up, 46-year-old Kim Hewitt said, she knew Floyd. The verdict alone wasn't enough to make her rest easy — she wants the criminal justice system to treat Chauvin the same way she feels that it has treated the Black community.

"I'm not happy until I get [Chauvin's prison time], and they put him in the population and they treat him like a criminal — like they look at us in the community as criminals," she told the station.

Following what she called an emotional year, Hewitt said she hoped that Houston can come together to focus on the issue of police violence.

Amid nationwide calls for police reform, Danielle Outlaw, commissioner of the Philadelphia Police Department, says she's focusing on the work ahead.

After Floyd's death, her department adopted a number of measures to improve police accountability and to prevent potential instances of excessive use of force.

"As a law enforcement official, I find the behavior that took George Floyd's life abhorrent," she said in a statement. "Although a verdict was reached today, I ask for calm. I ask for peace. Let us use this time to reflect on our justice system, what reforms have taken place, and the work still left to do."

Gary McCollum, a local minister in Virginia Beach, said he's afraid that Chauvin's actions will be portrayed as those of "one bad apple" in the criminal justice system rather than a systemic problem.

"Chauvin was not one bad apple," he said. "You have a system that preys on marginalized communities and African Americans and the only reason that he was convicted [is] that it was live and people saw it all over the world."

McCollum said it's time to "reimagine policing," for example, by using technology similar to speed cameras to replace traffic stops.

James Allen, 68, another Black activist and president of Virginia Beach Interdenominational Ministers Conference, said he had no doubt that Chauvin would be found guilty.

"You know why? Because we watched a man get murdered live and in living color on national TV. That's the difference. All of a sudden now, all of my white friends who used to say, 'James, you're being paranoid,' they can't say that anymore."

Rodney Johnson, 65, a Navy veteran, had been glued to the TV coverage over the course of the three-week trial before heading out to Black Lives Matter Plaza following the verdict. He's not confident that one guilty verdict will change much when it comes to the problem of police brutality. Police have to police themselves, he said.

"People think this racial injustice thing is going to go away — it's not. Until everybody, everybody, learns to love each other."

Nearby, Sheila Kyarisiima, who joined the crowds with her 2-year-old son, called the outcome "a glimmer of hope."

"But it also just shows that there's so much more work to be done," she said. "What happens when there's no camera, right?"

A caption on a previous version of this story incorrectly said the people gathered and the verdict was read on Saturday. Both events occurred on Tuesday. 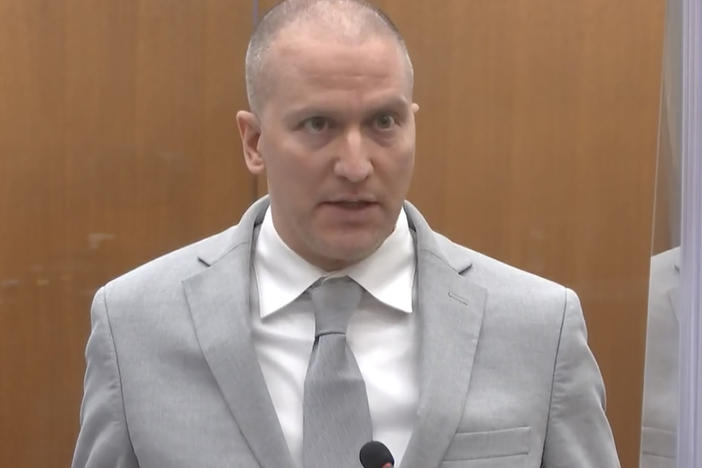 Prosecutors were asking for the former police officer to be sentenced to a 30-year prison term. The defense attorney called for probation and time already served. 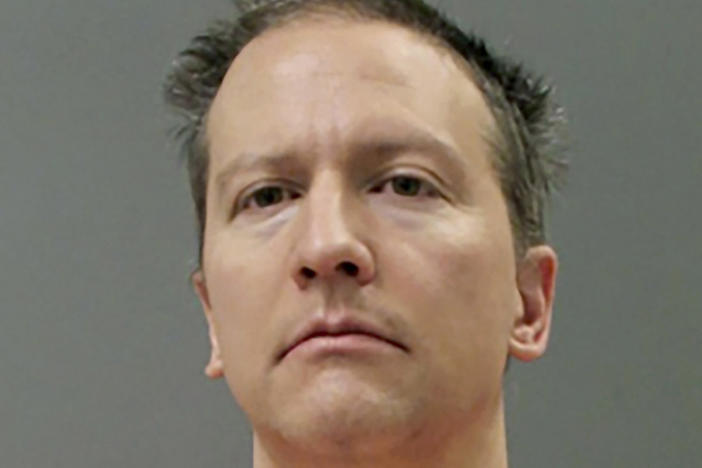 The judge found that Chauvin abused a position of trust, treated George Floyd with "particular cruelty," committed the crime as part of a group, and the offense occurred in front of children. 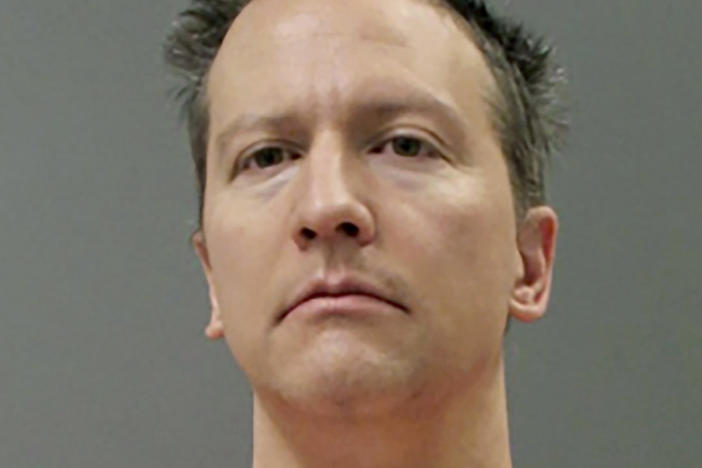 The former Minneapolis police officer who was convicted last month for murdering George Floyd is asking the court for a new trial. His lawyers say Chauvin's case was tainted by pretrial publicity.