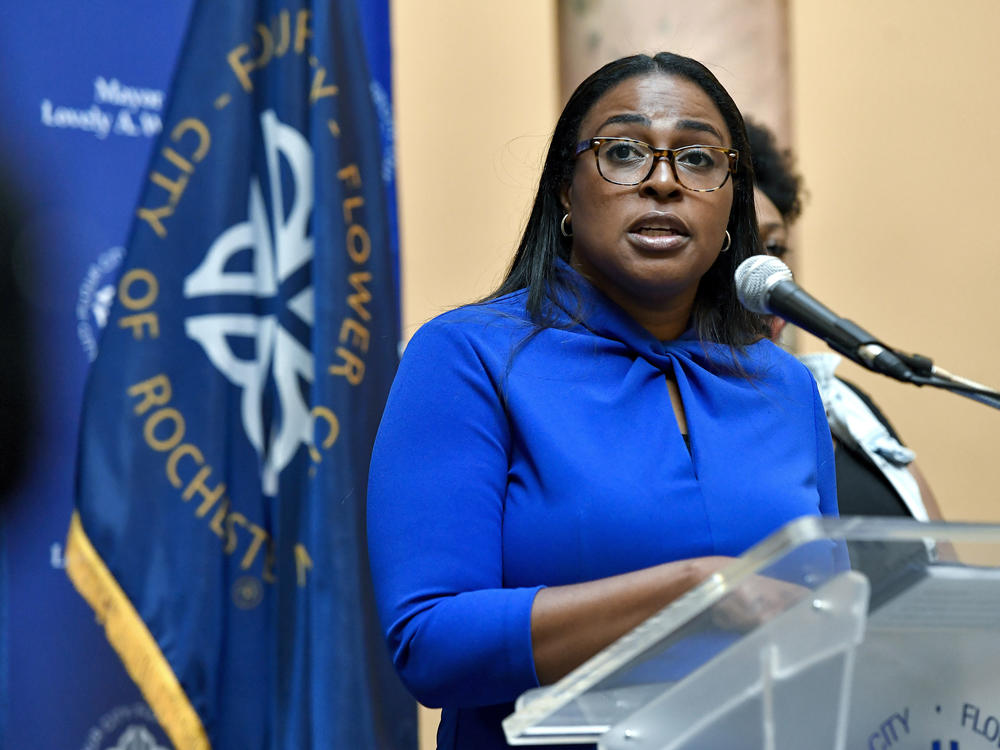 Rochester, N.Y., Mayor Lovely Warren, seen at a Sept. 3 news conference, announced a series of personnel actions and reforms on Monday following a preliminary review of the city's handling of the events following the March arrest and death of Daniel Prude.

The mayor of Rochester, N.Y., announced disciplinary actions and promised reforms on Monday after a preliminary internal report found significant issues with top police and city officials' response to the March asphyxiation death of Daniel Prude.

Mayor Lovely Warren said she had fired Rochester Police Chief La'Ron Singletary, less than one week after he announced his resignation and two weeks before he was set to step down. She also suspended her communications director, Justin Roj, and the city's attorney, Tim Curtin, for 30 days without pay. The Rochester Police Department did not respond to NPR's request for comment.

City officials later confirmed that Deputy Chief Mark Simmons will serve as acting police chief for 30 days. Simmons is one of four police officials who are either retiring or being demoted in the aftermath of Prude's death, with the department saying last week that he would return to his previously held rank of lieutenant.

Warren is also calling for a series of federal investigations and citywide reforms following Prude's death, which sparked protests and accusations of a cover-up after police body camera footage of his arrest was released earlier this month. Some protesters are demanding that Warren resign.

At a news conference on Monday, Warren admitted that she and other officials should have been more transparent with the public from the start, and cited "systematic failures" that must be acknowledged and reformed.

Those are among the findings of a preliminary 10-page report compiled by Deputy Mayor James Smith, accompanied by a timeline and trove of internal documents, all of which are publicly available.

"This initial look has shown what so many have suspected, that we have a pervasive problem in the Rochester Police Department, one that views everything through the eyes of the badge and not the citizens we serve," Warren said. "It shows that Mr. Prude's death was not taken as seriously as it should have been by those who reviewed the case throughout city government at every level."

Warren said she will move forward with the eight recommendations from the review.

Those include asking "the U.S. Attorney General's Office to conduct an investigation into possible violations of Mr. Prude's civil rights and bring appropriate charges if warranted," and requesting a "thorough review" of the city's police department by the U.S. Department of Justice, including all of its body camera footage from use-of-force arrests over the past three years.

Warren is also directing the city's Office of Public Integrity to investigate whether any employees — herself included — violated city or departmental policies and ethical standards, and to bring charges as warranted.

"I have apologized to the Prude Family and this community for the failures that happened along the way, including my own," Warren said in a statement. "As Mayor, I own these failures. And as Mayor, I have an obligation, once identified, to do everything to fix them."

The deputy mayor wrote in a summary of his report that he was directed to begin the process of determining "who knew what and when" between the March 23 incident and early September.

"The words 'homicide' and 'in custody' death should have stopped anyone who heard them in their tracks and prompted an immediate quest for more information," Smith wrote. "That did not happen and it begs the question 'why' if there is any hope to make sure it NEVER happens again."

Criticism of training, process and response

Smith outlined his findings into seven categories that range from "Questions of Training and Career Guidance" to "RPD Does Not Immediately Recognize the Significance of Mr. Prude's Death or Seek Outside Guidance" to "Failure to Recognize National Events." Those form the basis of his eight recommendations.

Based on a review of internal emails and other digital records, Smith accused the police department of mishandling Prude's mental hygiene arrest and the events that followed, and raised questions about its reporting of other arrests in which officers used force.

The records revealed a "culture of insularity, acceptance, and, quite frankly, callousness" at the police department, Smith concluded.

He cited the attitudes of officers involved in the arrest, to investigators who determined their actions were justified, to department leadership continuing to describe Prude's death as the result of "overdose and resisting arrest" even after it was officially ruled a homicide.

Smith also said police leadership had failed to properly disclose the nature of Prude's death to the mayor's office and did not seek guidance from outside the department, despite suggestions early on from subordinates to notify the mayor.

Roj, the communications director, said in a statement on Monday that he was not aware of what had happened to Prude until Aug. 4, at which point he "immediately expressed my opinion within City Hall that the officers involved should no longer be on our streets." Roj added that, in hindsight, he should have questioned the police chief, who informed him of Prude's "death in custody" and the homicide ruling via email on April 10, or discussed Singletary's email with the mayor.

Smith also said the city's handling of the Prude family's records request "seemed disorganized," noting that while the initial request was filed on April 3, the body camera footage was not provided until Aug. 12.

He noted that police leadership raised concerns in June about fulfilling the records request while the criminal investigation was underway, and that Curtin, the city attorney, sought to determine whether municipal attorneys could deny or delay their request.

Because the investigation into Prude's death was being conducted by the New York State Attorney General's office instead of the local district attorney, Smith said, city officials involved may have been confused about which rules to follow.

As a result, his recommendations for the city include seeking formal clarification on the release of public information during criminal investigations conducted by the state's attorney general, and adopting a "hard-and-fast policy" that all investigations of RPD officers be immediately announced to the public.

Warren did not take questions at Monday's press conference, saying she wants the media and public to have time to review the lengthy documents that had just been released. She promised to "regroup" in a few days and answer questions then. 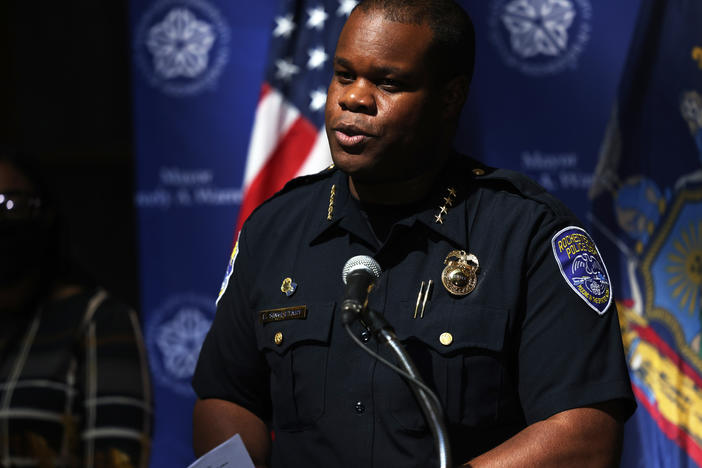 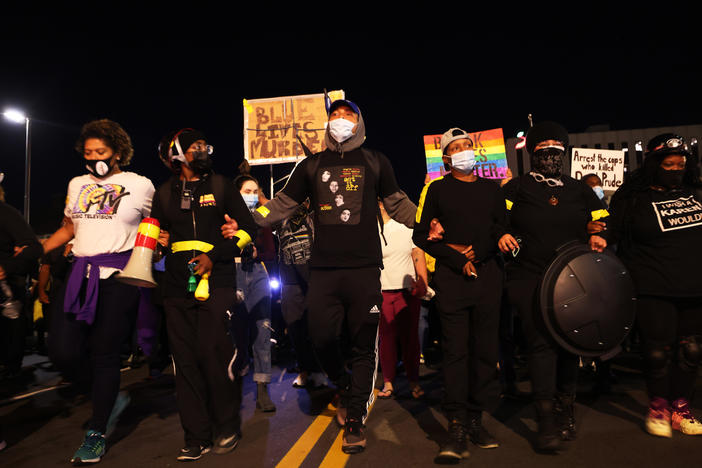 New York Attorney General Letitia James announced on Saturday that she is putting together a grand jury as part of an investigation into the death of Daniel Prude, who died in police custody in March. 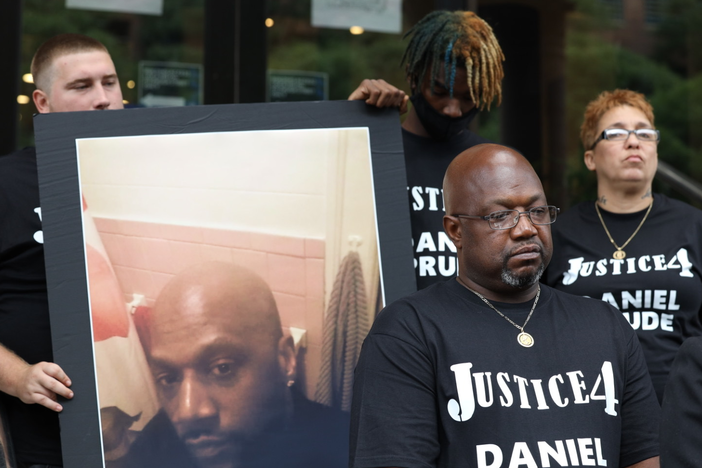 Daniel Prude was arrested in March after behaving erratically on a city street. Officers placed a protective hood over his head, and Prude ultimately stopped breathing. He died a week later.