'Tired Of The Killings': Pro Athletes Refuse To Play To Protest Racial Injustice 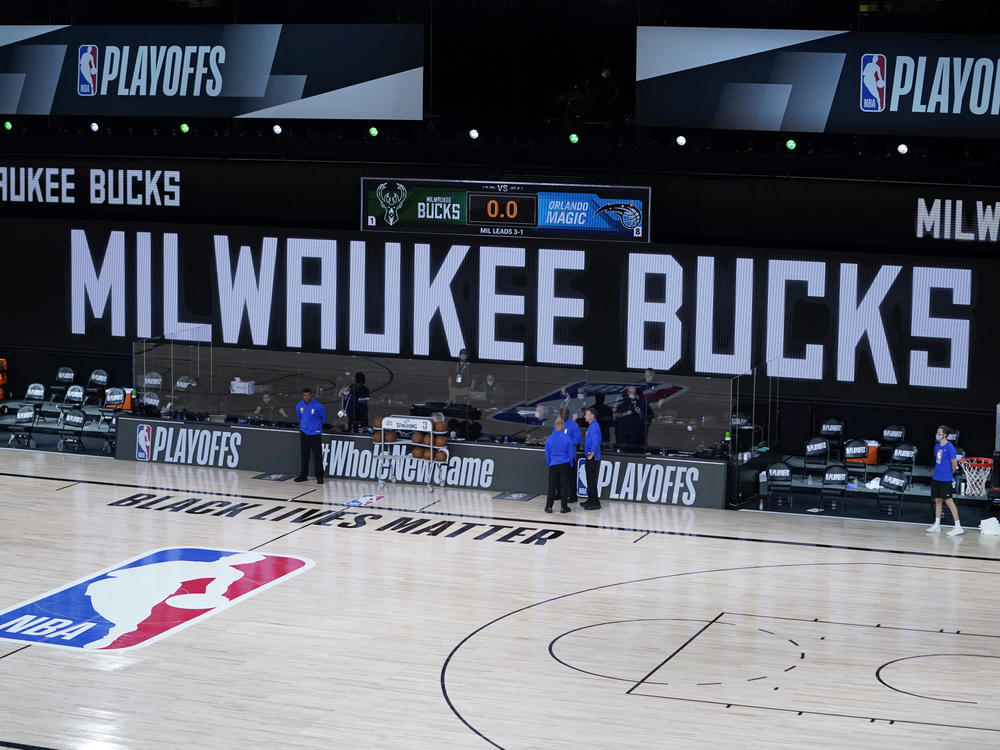 Caption
Officials stand beside an empty court at the scheduled start of an NBA playoff game on Wednesday. The Milwaukee Bucks didn't take the floor in protest against racial injustice and the shooting of Jacob Blake.

Professional sports teams in several leagues have taken their most dramatic steps yet in an effort to raise awareness about social justice issues.

On Wednesday, the NBA's Milwaukee Bucks decided not to play their playoff game against the Orlando Magic to protest Sunday's police shooting of Jacob Blake, a Black man in Wisconsin. Following the Bucks' decision, the NBA announced all three playoff games scheduled for Wednesday were postponed.

According to the league, those three games, including the Houston Rockets vs. Oklahoma City Thunder and Los Angeles Lakers vs. Portland Trailblazers, will be rescheduled.

After the NBA's announcement, the dominoes started to fall.

In Major League Baseball, three games were postponed. Another Wisconsin team led the way — the Milwaukee Brewers called off their home game against the Cincinnati Reds.

"We need to pause and reflect on the events that are causing such pain and hardship to our local community and country," the Brewers said in a statement. "The entire organization is committed to putting the spotlight on racial injustice, inequality, and the necessity for change."

The Seattle Mariners, a team reportedly with the most black players in the majors, decided not to play San Diego on Wednesday, saying the team stands "with our players as they speak out with their words and actions against social injustice."

It all started with the Bucks. The top team in the Eastern Conference was scheduled to play Orlando in Game 5 of their first-round playoff series. The Bucks lead 3-1. Orlando took the court to warm up, but the Bucks didn't. Soon it became apparent the Milwaukee players weren't going to come out. The basketballs were put away. The referees left the court.

Guard George Hill told Marc Spears of ESPN's The Undefeated, the Bucks weren't playing in light of the shooting of Jacob Blake on Sunday. Blake survived, but his family says he was paralyzed after being repeatedly shot in the back while trying to climb into the driver's side of a vehicle.

"We're tired of the killings and the injustice," Hill said.

The NBA's most prominent player, LeBron James, was scheduled to play Wednesday with his Los Angeles Lakers hoping to clinch their first-round series against Portland.

James, with 47 million Twitter followers, spoke for many athletes when he tweeted an expletive, and then this: "WE DEMAND CHANGE. SICK OF IT."

The day after Blake was shot by police, the Bucks' Hill echoed another growing sentiment felt by some players — frustration about living in the NBA's pandemic-protected environment, referred to as the bubble, near Orlando, Fla.

"We can't do anything," Hill said in an interview. "First of all, we shouldn't even came to this damn place, to be honest. I think coming here just took all the focal points off of what the issues are."

That was a concern of some players before they arrived in Florida in early July. Those who'd taken part in nationwide demonstrations against police violence and social inequality following the death of George Floyd, or who'd spoken out on those issues, felt the strength of their messages might be lost as games started and connections to the outside world shrank.

In the aftermath of Blake's shooting, the frustration grew.

The bubble has been filled with reminders of social injustice — Black Lives Matter is written on the basketball courts. Most players and coaches are kneeling in protest during the playing of the national anthem and are wearing jerseys and shirts with messages like I Am A Man, Education and How Many More?

Toronto Raptors guard Norman Powell was one of those questioning these well-intentioned displays.

"Taking a knee for the anthem, that's not getting the job done," Powell said. "That's getting washed out. Something has to happen where you're forcing these people who can make the change to do something."

The Bucks followed their decision with a statement aimed at forcing that change.

Hill and teammate Sterling Brown read it to reporters.

"The past four months have shed a light on the ongoing racial injustices facing our African American communities. Citizens around the country have used their voices and platforms to speak out against these wrongdoings. Over the last few days, in our home state of Wisconsin, we've seen the horrendous video of Jacob Blake being shot in the back seven times by a police officer in Kenosha and the additional shooting of protesters. Despite the overwhelming plea for change, there has been no action, so our focus today cannot be on basketball.

"When we take the court and represent Milwaukee and Wisconsin, we are expected to play at a high level, give maximum effort and hold each other accountable. We hold each other to that standard, and in this moment we are demanding the same from lawmakers and law enforcement. We are calling for justice for Jacob Blake and demand for the officers to be held accountable. For this to occur, it is imperative for the Wisconsin state legislature to reconvene after months of inaction and take up meaningful measures to address issues of police accountability, brutality and criminal justice reform. We encourage all citizens to educate themselves, take peaceful and responsible action and remember to vote on Nov. 3."

Reportedly, the NBA Board of Governors is scheduled to meet Thursday morning to discuss next steps inside the bubble. There was talk the league may cancel the rest of the season. But according to Chris Haynes, a senior NBA Insider for Yahoo Sports, "a sizable amount of players [are] advocating to finish the season out since sacrifices were made to enter the bubble, believing the NBA platform is a useful resource in this social climate." 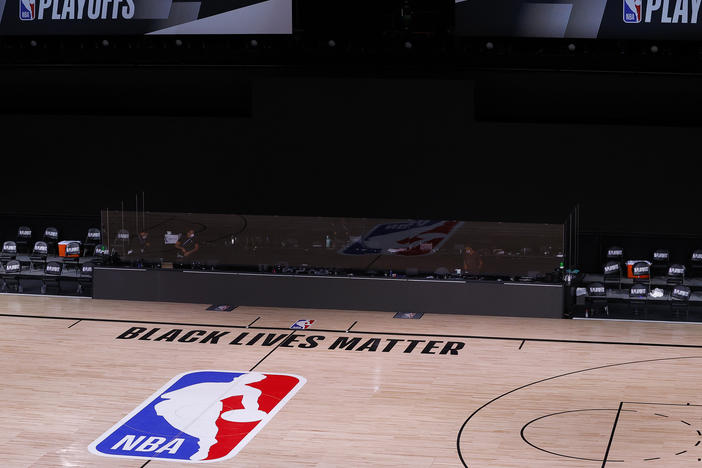 The NBA postponed its playoffs for a second night in a row but says it's reached an agreement to resume soon. Players protested continued racial injustice after another police shooting of a Black man. 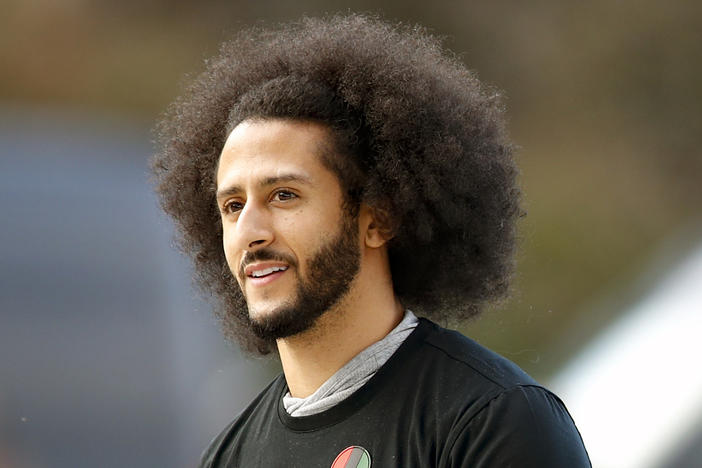 The Return Of Colin Kaepernick — To The Madden Franchise

EA Sports says Kaepernick will return as a free agent in the latest update of Madden 21. His overall rating of 81 is higher than several notable NFL starters, including Baker Mayfield and Cam Newton. 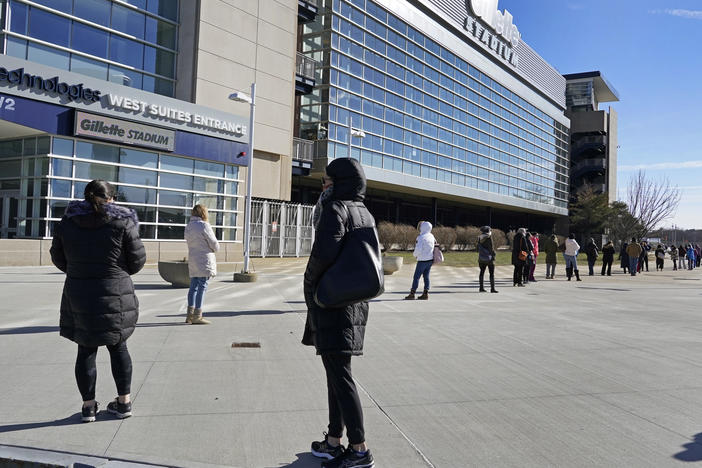 NFL Offers All 30 Stadiums For Use As Coronavirus Vaccine Sites

Each NFL team "will make its stadium available for mass vaccinations of the general public," NFL Commissioner Roger Goodell said in a letter to President Biden.