In Brief Drive-By, Trump Waves To Supporters Outside Of Walter Reed 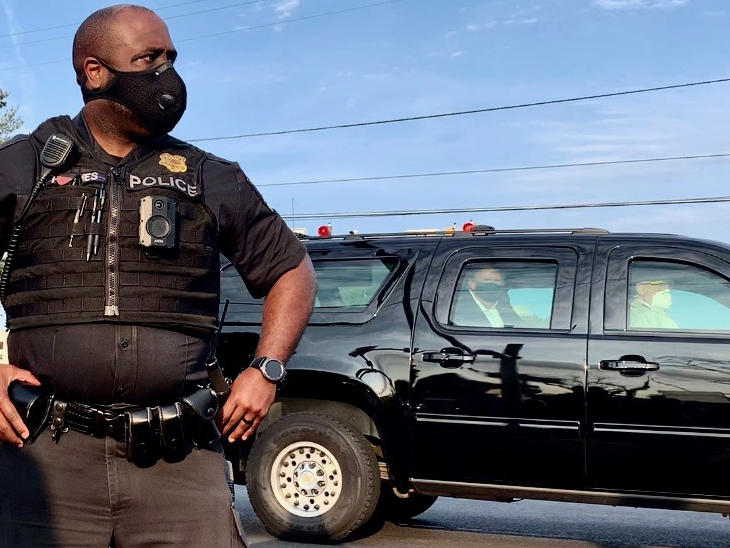 Caption
President Trump looks on from the back of a car in a motorcade outside of Walter Reed Medical Center in Bethesda, Maryland.

A masked Trump was seen waving to supporters from a black SUV. Other images showed Secret Service personnel in the vehicle with personal protective equipment on. 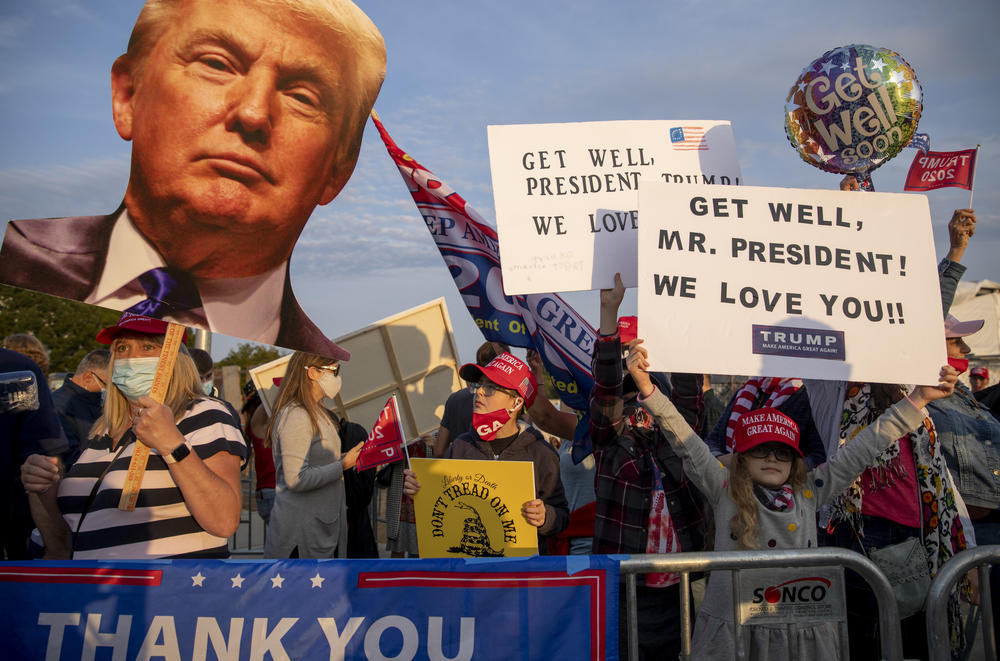 Caption
On left, Darla Cable of Cabin John, Md., holds a Trump cutout as others show their signs.

Right before the drive-by, the president tweeted a video in which he thanked the doctors and staff at Walter Reed for treating him for COVID-19 and said he was about to "make a little surprise visit" outside to greet supporters.

"We're going to pay a little surprise to some of the great patriots that we have out on the street, and they've been out there for a long time and they've got Trump flags and they love our country," Trump said. 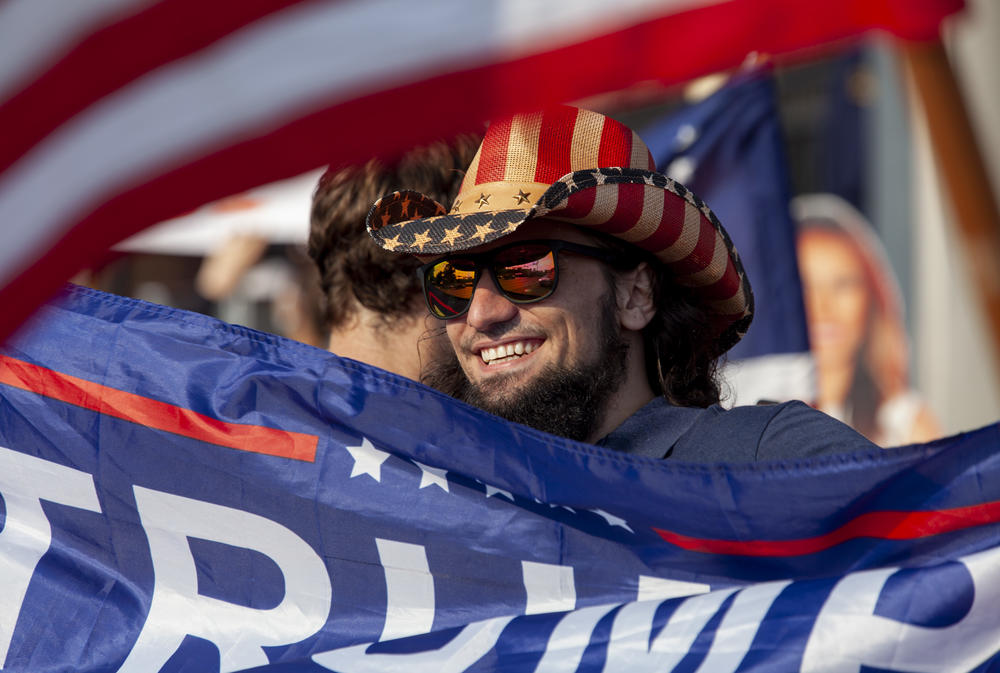 Caption
Trump supporters gather outside of Walter Reed National Military Medical Center where the president is hospitalized in treatment for coronavirus.

In the video, Trump said his experience with the coronavirus has been "a very interesting journey."

Trump has been briefed extensively about the pandemic by members of his White House coronavirus task force and other advisers.

"I get it, and I understand it, and it's a very interesting thing I'm going to be letting you know about it," Trump said, thanking the nurses and doctors for their work. 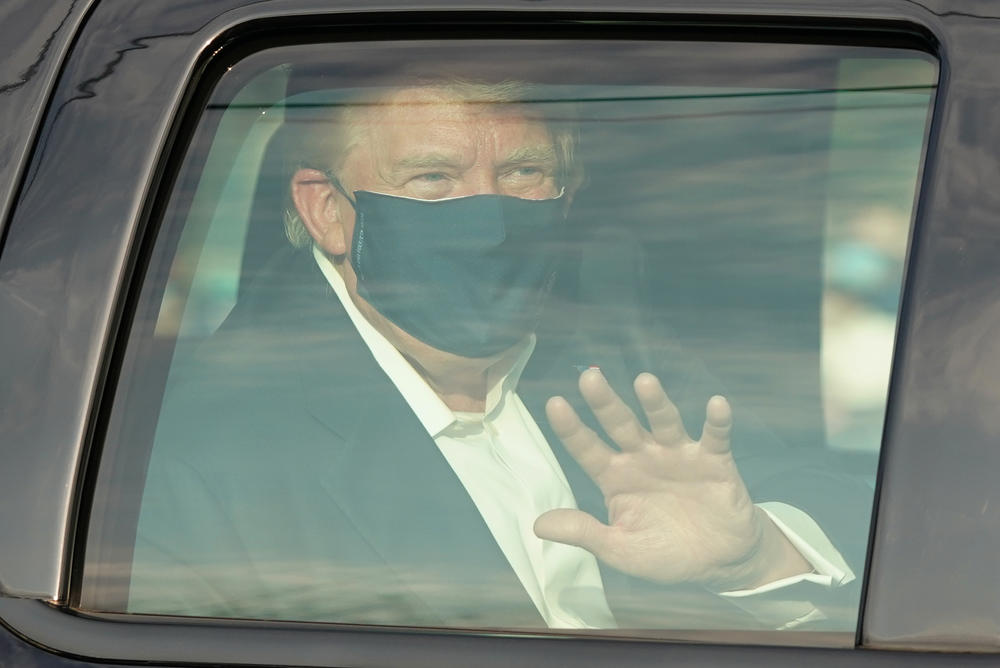 Dr. James Phillips, chief of disaster medicine at George Washington University, lambasted the move as being made for "political theater."

"That Presidential SUV is not only bulletproof, but hermetically sealed against chemical attack. The risk of COVID-19 transmission inside is as high as it gets outside of medical procedures. The irresponsibility is astounding. My thoughts are with the Secret Service forced to play," he wrote on Twitter.

White House spokesman Judd Deere said the excursion had been cleared by the medical team beforehand. 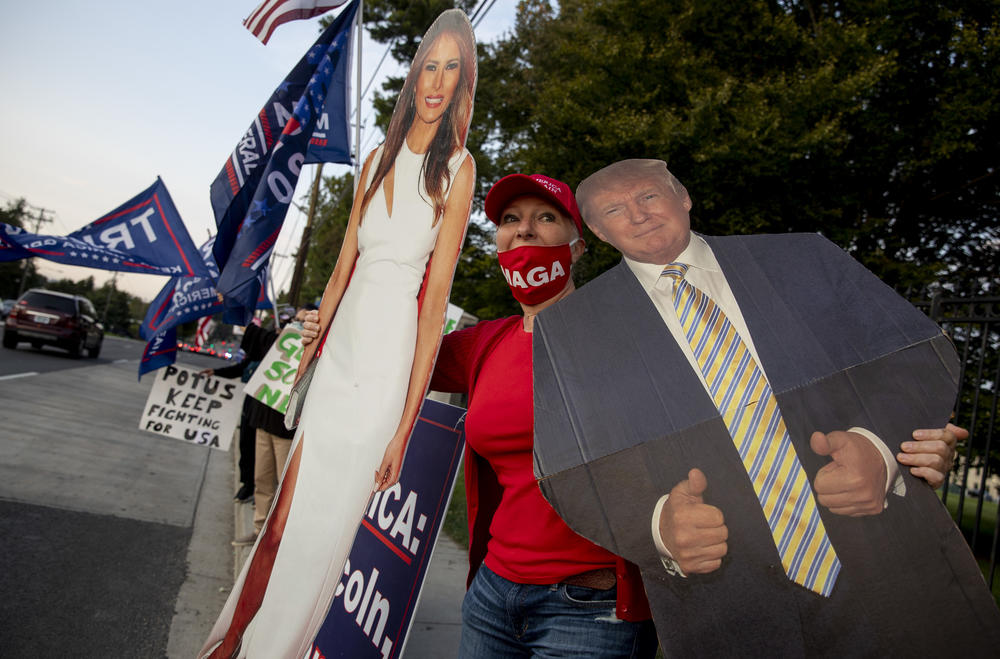 Caption
Tatiana Demidio of Arlington, Va., but originally from Moscow holds cutout posters of the president and First Lady as they cheer and cars blow their horns.

"Appropriate precautions were taken in the execution of this movement to protect the president and all those supporting it, including PPE," he said in a statement.

The president very rarely makes any movement in public without a press pool. In this case, the pool was not informed of the president leaving Walter Reed.

"President Trump took a short, last-minute motorcade ride to wave to his supporters outside and has now returned to the Presidential Suite inside Walter Reed," Deere said in a separate statement after the trip. 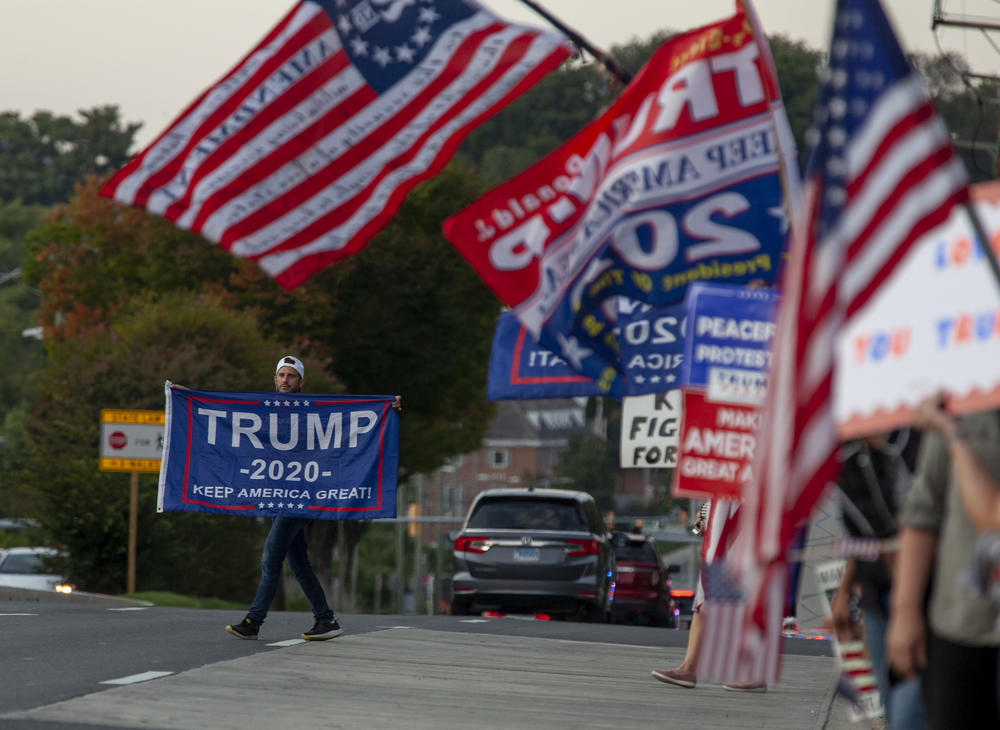 Caption
A Trump supporter carries his flag into the street just outside of Walter Reed Medical Center.

"It is outrageous for the president to have left the hospital — even briefly — amid a health crisis without a protective pool present to ensure that the American people know where their president is and how he is doing," the White House Correspondents' Association said in a statement. "Now more than ever, the American public deserves independent coverage of the president so they can be reliably informed about his health."

His brief visit outside came hours after Trump's medical team told reporters that the president experienced two drops in his oxygen levels over the course of his COVID-19 diagnosis, is being treated with a steroid, and could be discharged from Walter Reed as early as Monday. 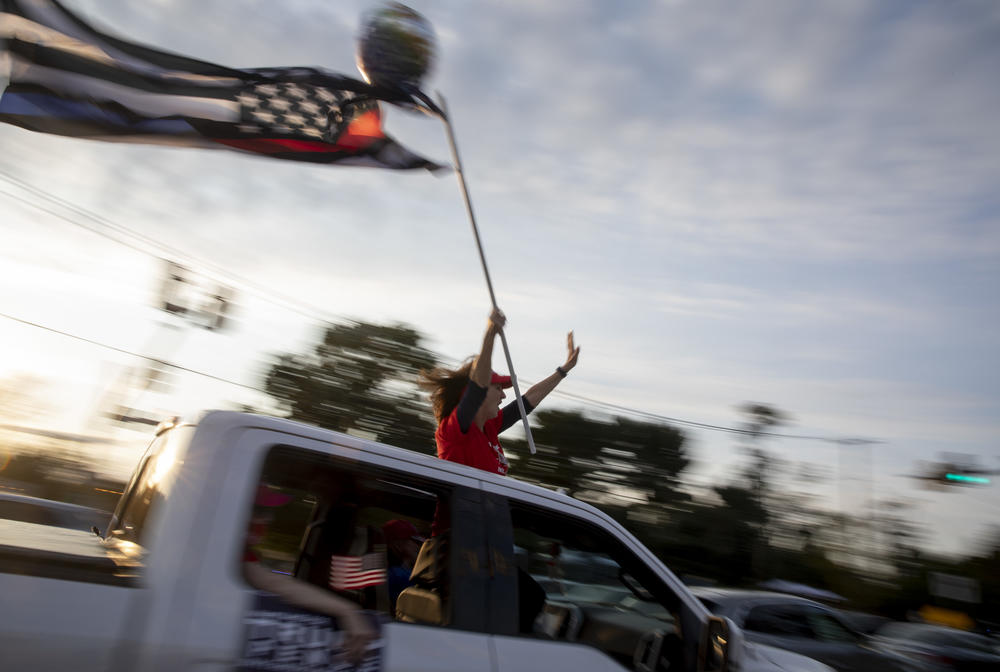 Caption
A Trump supporter holds U.S. flag as she rides down the road in front of Walter Reed Medical Center. 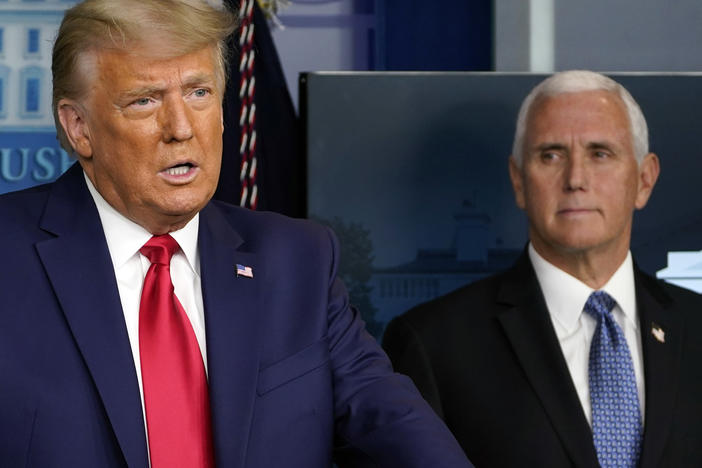 What The 25th Amendment Says About Removing A Sitting President

Ratified in 1967, the 25th Amendment to the Constitution gives the vice president the ability to assume the powers of the presidency if he has the support of the executive Cabinet. 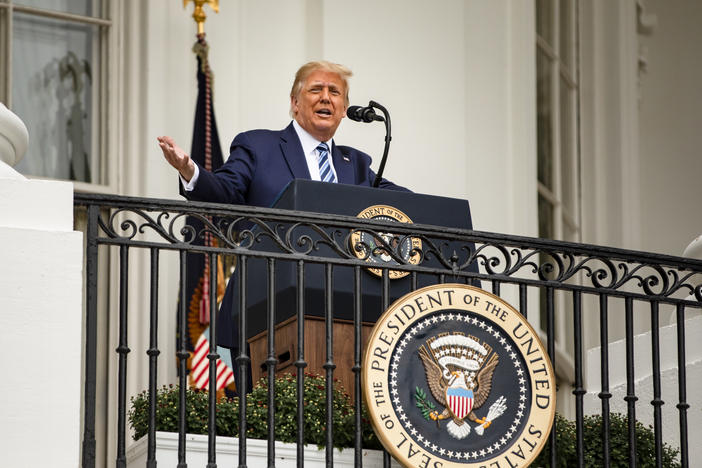 Trump's Doctor Says There's No 'Actively Replicating Virus' — So Is He COVID-19-Free?

Doctors say people who have had COVID-19 can test positive but no longer be contagious. Trump's doctor said Trump is "no longer a transmission risk to others" but did not say if Trump tested negative. 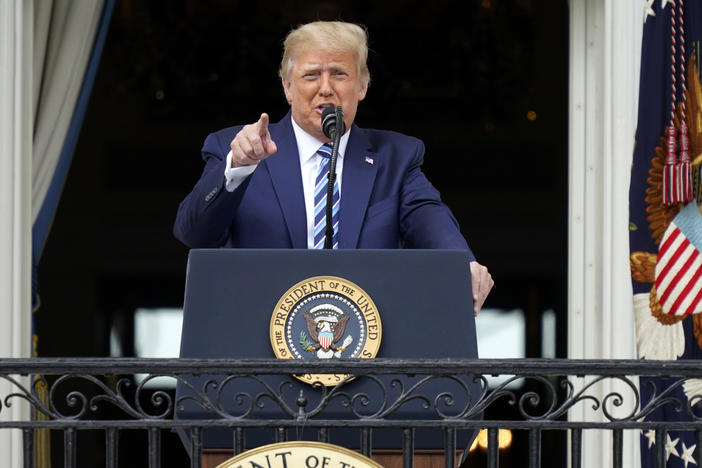 White House physician Dr. Sean Conley says the president is no longer contagious 10 days after the onset of symptoms, but did not give details on whether Trump has tested negative for the coronavirus.