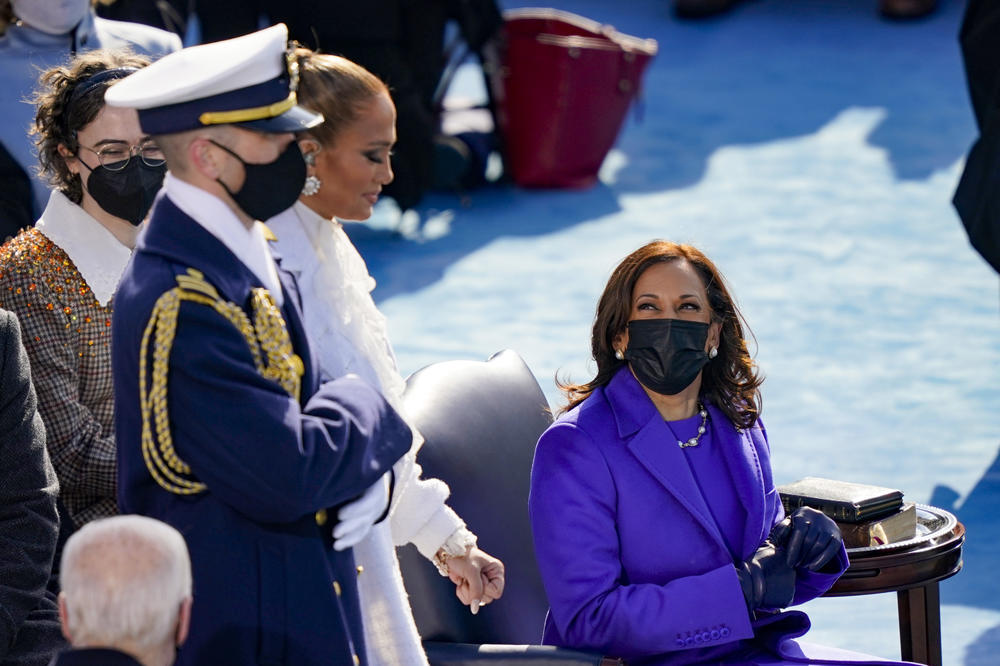 Vice President Harris chose a purple number for her big day — believed to be a nod to Shirley Chisholm — at the presidential inauguration ceremony on Wednesday.

The presidential inauguration ceremony on Wednesday looked a lot different than in previous years. Masks were a reminder of a pandemic still raging. The ceremonial parade was canceled and some customs went virtual. In a historically rare snub, a sitting President Trump was absent for the swearing-in ceremony of his successor, Joe Biden.

But, at least for the sartorially minded, an abundance of strategically selected outfits helped elevate an unusual and scaled-back ceremony.

There were repurposed woolen mittens, elaborate face masks and dramatic collars. Over on social media, amateur fashion sleuths looked on, attaching symbolism and pronouncing the emergence of new clothing aesthetics. Bright color choices told their own stories and paid tribute to leaders past.

There was Amanda Gorman, the youngest inaugural poet in history, who captivated the country with the reading of her poem, "The Hill We Climb." In a vibrant canary yellow Miuccia Prada coat, a red satin Prada headband and a red mask to match, the 22-year-old stood out in a sea of muted tones and indistinguishable suits.

The yellow, Gorman told Vogue, was her way of paying homage to first lady Jill Biden. The first lady asked Gorman to recite an original poem at her husband's swearing-in last month after she was moved by Gorman's reading of her poem, "In This Place: An American Lyric," in 2017 at the Library of Congress.

Gorman told the magazine: [Jill Biden] said, "I saw this video of you and you were wearing yellow and I loved it."

The poet also wore gold hoops and a ring in the shape of a caged bird, a present from Oprah Winfrey as a tribute to Maya Angelou and her poem, "I Know Why the Caged Bird Sings." 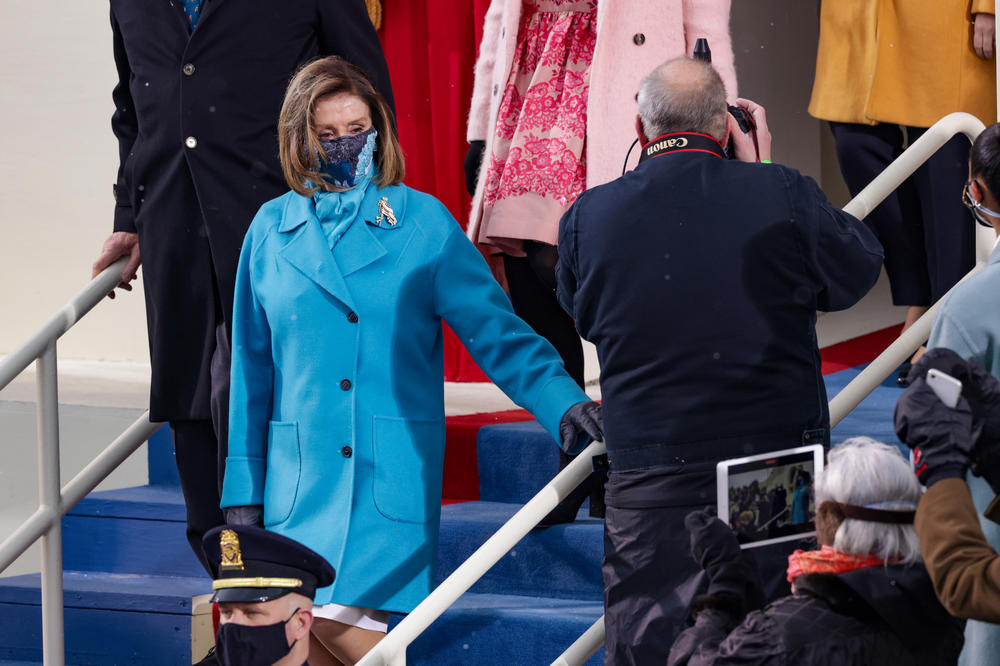 House Speaker Nancy Pelosi's brilliant blue coat appeared to have weathered a few snow flurries ahead of the inauguration ceremony.

Lady Gaga, a pop star synonymous with drama, belted out the national anthem in custom Schiaparelli haute couture: a fitted navy jacket and a billowy red silk skirt. Washington Post humor columnist Alexandra Petri thought Gaga's severe attire might as well have been plucked from a Hunger Games movie. With an unmissable golden dove brooch pinned to her chest, though, the avant-garde shapeshifter insists she was sending a message of peace to a divided nation: "A dove carrying an olive branch," Gaga tweeted. "May we all make peace with each other." 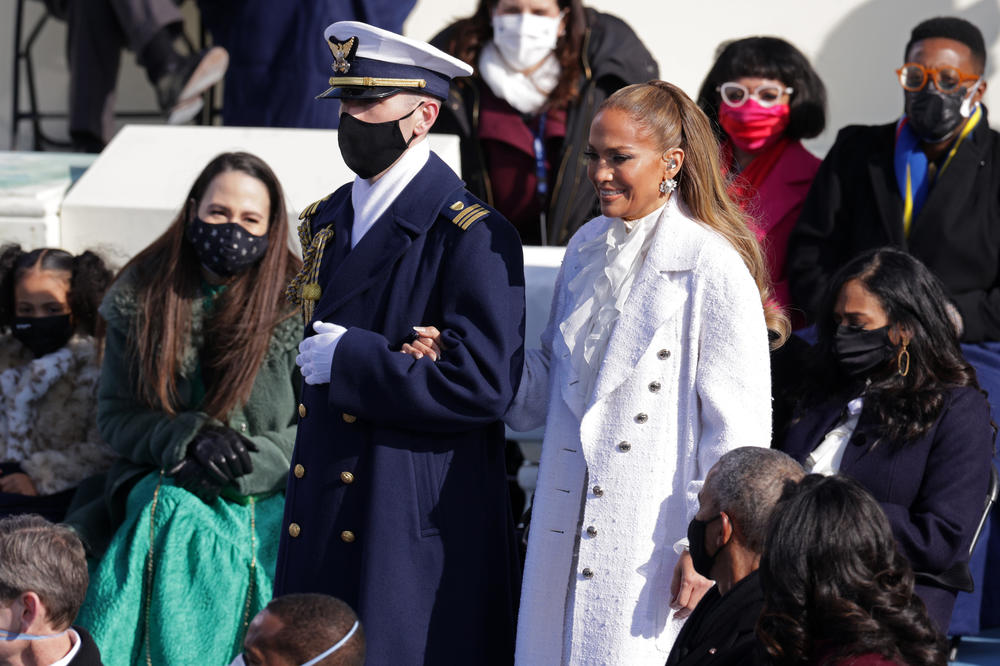 Jennifer Lopez is escorted to the inauguration.

Jennifer Lopez followed co-headliner Lady Gaga in a Victorian chic look (Pride and Prejudice, but make it glam). J.Lo's all-white Chanel ensemble featured a ruffled blouse buttoned to the top of her neck. Her pants, loose and sequined, contrasted with the rigidity of her tweed coat. Looks aside, Twitter users collectively lost their minds when the performer summoned a sampling of her 1999 hit, "Let's Get Loud," during her rendition of "This Land Is Your Land." 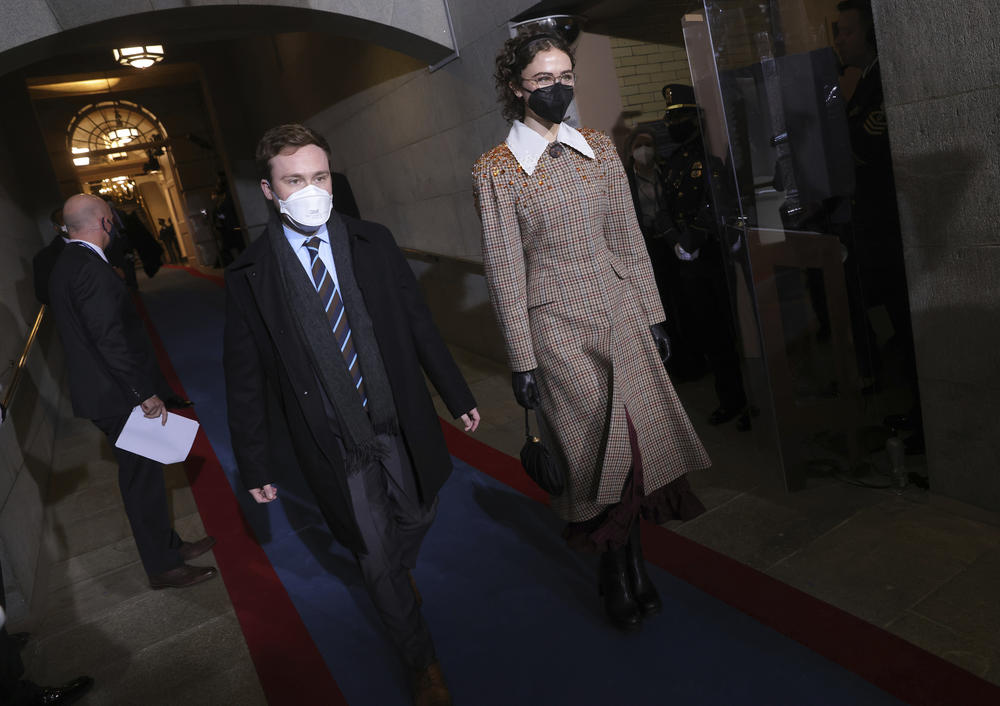 Cole Emhoff (left) and Ella Emhoff, the stepchildren of Vice President Harris, arrive for the inauguration at the Capitol.

Ella Emhoff, stepdaughter to Vice President Harris, turned out in full 20-something art-student-from-Brooklyn glory (or so some social media users observed). She arrived at the Capitol wearing a dramatic tweed coat from Miu Miu adorned with a frilly oversized collar. Underneath was a Batsheva dress — reminiscent of the prairie-chic style dominating Instagram Explore pages. Emhoff's stylists, Jill Lincoln and Jordan Johnson, completed the look with chunky black boots and a thin hairband. 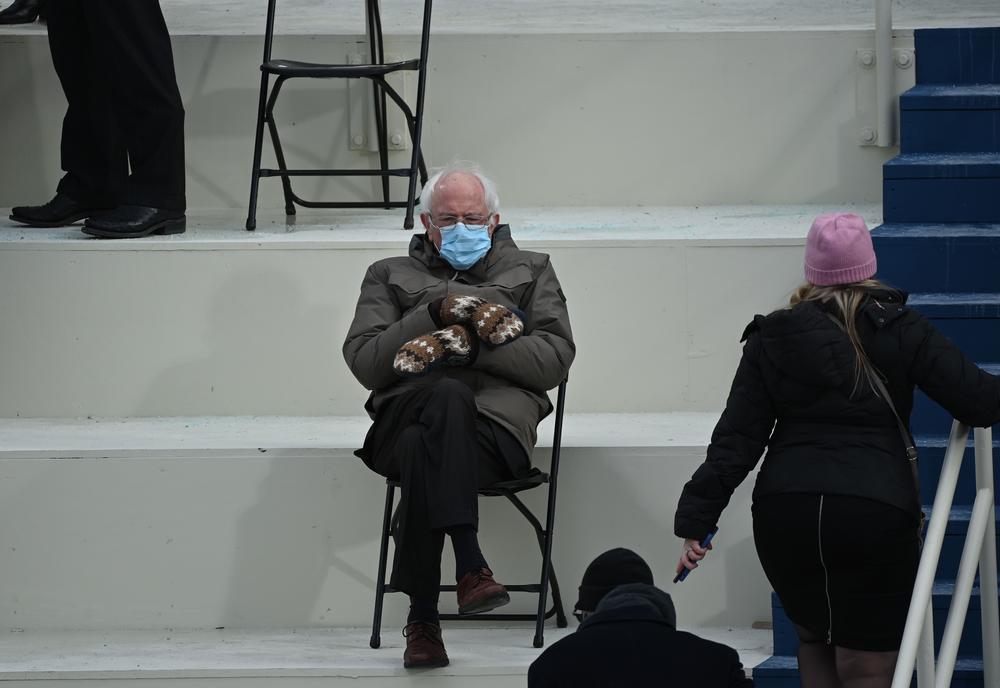 Sen. Bernie Sanders (I-Vt.), a former presidential candidate, looks toasty in the bleachers before Joe Biden is sworn in.

Appearing to hold down his socially distanced 6-foot perimeter, Bernie Sanders gave onlookers an unobstructed view of his take on "grumpy chic."

The Vermont senator's understated look stood out among the formal-clad masses. Staying loyal to his Green Mountain State roots, he wore a hefty parka from Burton, a Vermont-based snowboarding brand. As astute Tweeters noted, Sanders wore the same coat in a now famous "I am once again asking" meme that originated from a video in which he asks for donations back when he was on the campaign trail. Burton Snowboards took it as an opportunity to offer fans a Bernie-inspired budget-friendly look.

It was also hard to overlook the senator's repurposed sweater-wool mittens — gifted to him a couple of years ago by Jen Ellis, a teacher in Vermont, a backstory noted by Buzzfeed reporter Ruby Cramer.

Despite all appearances, his inauguration presence was not a pit stop on an errand run, as some on Twitter suggested. Where Sanders comes from, he told CBS in an interview following the ceremony, "We're not so concerned about good fashion — we want to keep warm. And that's what I did today."

Similarly, Janet Yellen prioritized comfort over fashion in freezing-cold temps. The former chair of the Federal Reserve, and Biden's pick for Treasury secretary, was nestled inside of her black puffer jacket. She draped a blue blanket over her knees for added toastiness. 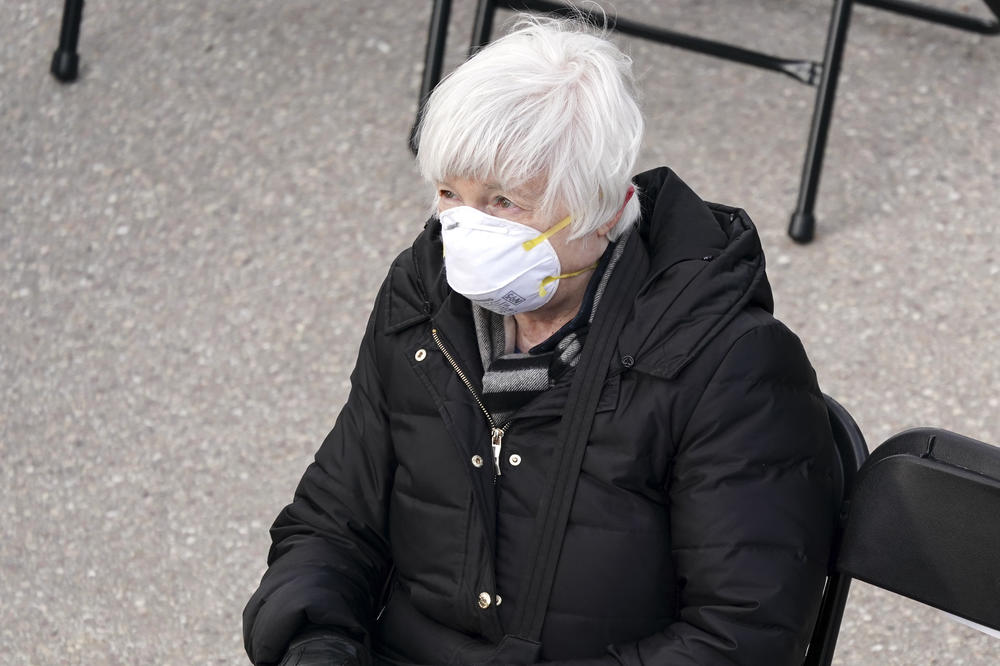 Biden's granddaughters arrived at the Capitol looking like an all-woman supergroup, according to several Twitter users who said they thought the pop rock-band Haim arrived to perform at the inauguration. They were decked out in monochromatic outfits, down to their masks and gloves. Plus, the combination of pink, camel and white struck some as the human embodiment of Neapolitan ice cream.

Not least of all, Vice President Harris made history while outfitted in a bold purple coat and matching dress by Christopher John Rogers, a young Black designer who hails from Louisiana.

CNN journalist Abby Phillip remarked that purple is a special color to Harris as a "nod to Shirley Chisholm," the first Black woman elected to Congress and whom the vice president has cited as inspiration for her political career. It's also a color of the women's suffrage movement, as NPR reported.

Opting for a plum pantsuit, former first lady Michelle Obama, too, stuck to the color theme that, as a blend of colors red and blue, has also traditionally signaled bipartisanship or unity.

In a previous version of this story, Ella Emhoff's stylist was incorrectly identified as Joseph Charles Viola. In fact, Jill Lincoln and Jordan Johnson styled Emhoff for the event. Viola is Emhoff's agent. 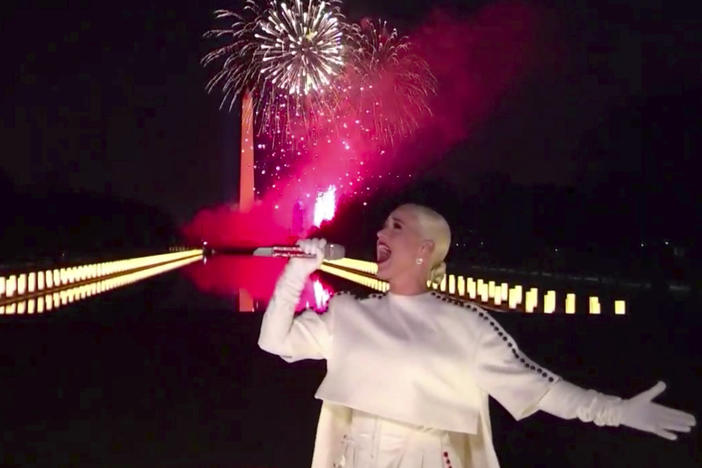 In 'Celebrating America' Biden, Harris Urge Nation To Rise Together

"Will we meet the moment like our forbearers have?" the newly sworn-in president asked Americans during the star-studded inaugural celebration. "I believe we must and I believe we will." 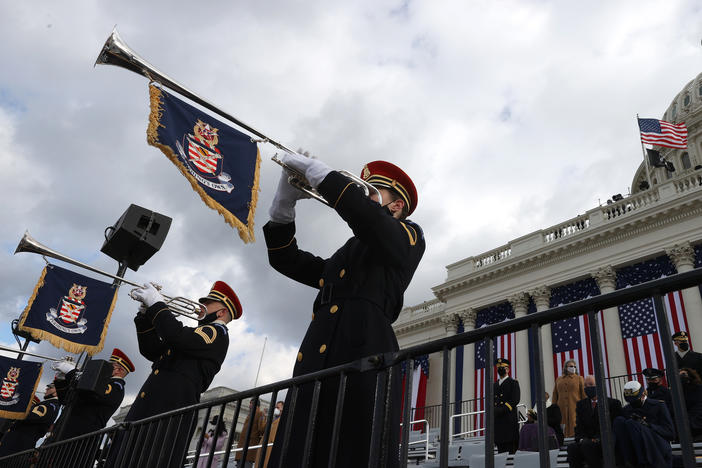 World Leaders Express Hope As Biden And Harris Are Sworn In 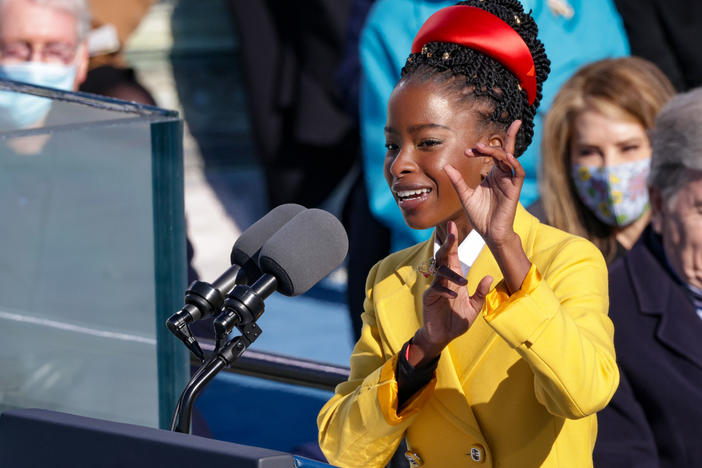 'Not Broken But Simply Unfinished': Poet Amanda Gorman Calls For A Better America

The 22-year-old composed a poem, "The Hill We Climb," that acknowledges the recent insurrection attempt, but turns resolutely toward hope. "The new dawn blooms," she writes.