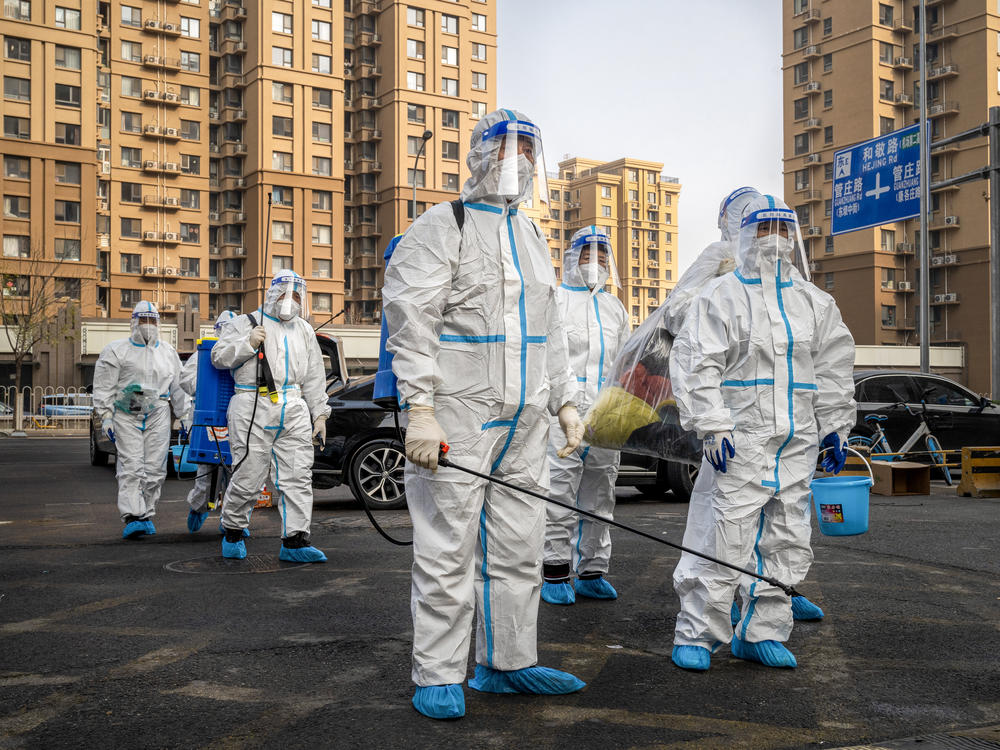 Workers wear protective gear in a Beijing neighborhood placed under lockdown in November. China had raised hopes by slightly relaxing its zero-COVID policy, but cities have been contending with a surge in cases. / Bloomberg via Getty Images

But as COVID cases are once again on the rise across the country, cities are once again locking down thousands of neighborhoods, including in the capital of Beijing, and sending close contacts to quarantine centers — raising questions about how serious authorities are about one day fading out the zero-COVID policy.

"This is the typical policy dilemma that the Chinese leaders face," said Yanzhong Huang, a senior fellow for global health at the Council on Foreign Relations at Seton Hall University in New Jersey. "When you relax and open up, it will lead to chaos, and when you tighten policy, it will be too rigid to allow any flexibility."

On Tuesday, China logged 28,883 new cases a day, a dramatic spike in a country that has grown accustomed to no more than a few hundred cases a day. Nearly half of the new cases are clustered in the southern city of Guangzhou and the southwestern municipality of Chongqing. Guangzhou ordered a five-day lockdown in its most populous Baiyun district until at least this Friday.

All 41,000 quarantine spots it had available were already filled as Chongqing raced to contain the newest outbreak, said Li Pan, deputy director of the Chongqing Health Commission at a news conference. The municipality announced it was speeding up the construction of new quarantine facilities capable of holding another 47,000 people. More than 5,000 construction workers labored around the clock to open a makeshift quarantine center within just five days.

Many Chinese cities have also resumed mass, mandatory COVID testing, reviving concerns about a faltering domestic economy and dampening hopes for a quick post-pandemic reopening. Earlier, many smaller localities had suspended such testing because they could no longer afford to keep paying for millions of tests a day.

The jump in cases this month has put local authorities in a bind: They have been tasked with both easing the burden of onerous COVID controls, yet simultaneously keep cases as close to zero as possible.

"Basically, you are telling the local government to pursue conflicting goals," said Huang. 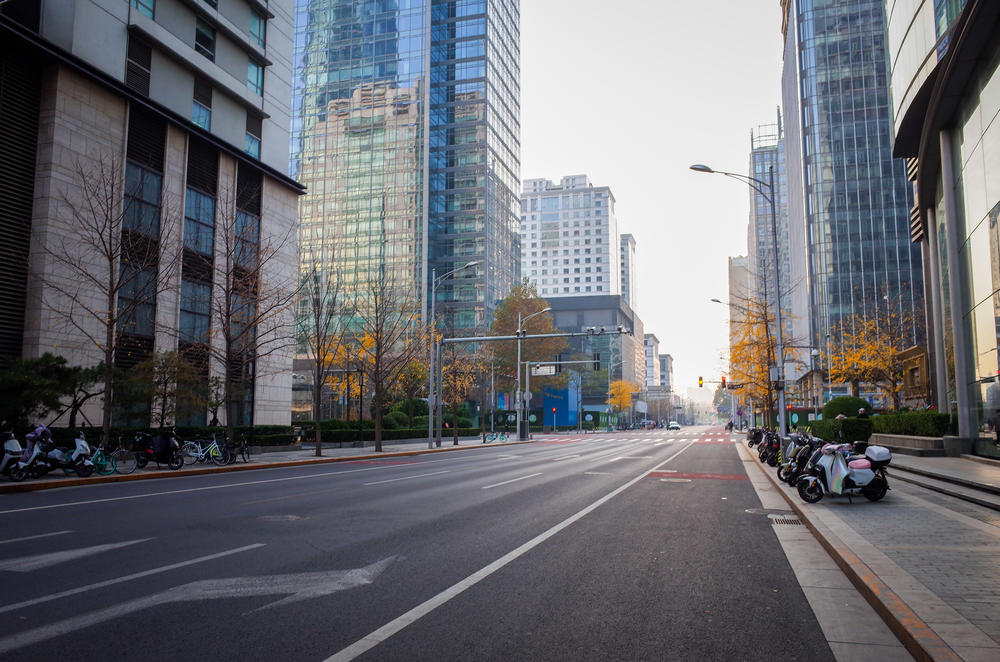 In practice, cities are now imposing targeted lockdowns in all but name as they struggle to fulfill these competing objectives. Authorities are calling the measures "silent management" — meaning residents cannot leave their homes, go to work or travel.

Zhengzhou, the capital of Henan province, vociferously denied that one of its districts is under lockdown, but residents said on social media they were mandated to stay at home. Taiyuan, the provincial capital of central Shanxi province, is also under "silent management," meaning all businesses must shut down their in-person operations and only vehicles with special exemptions will be allowed on the road.

"At present, the city's epidemic prevention and control has reached the most strenuous and critical stage," an official city notice from Taiyuan read.

The port city of Tianjin, which has logged fewer than 200 cases, announced mass-testing for the whole city last Sunday, during which residents will not be allowed to leave their homes until they obtain proof of a negative test.

In Beijing, the nation's capital, all residents in the city's largest district of Chaoyang were told to avoid leaving the district due to a spike in cases. Shanghai further tightened rules for people entering the city on Tuesday night, following a surging number of cases after a major trade fair, with all those arriving now required to take four COVID tests within five days.

Hohhot, the capital city of Inner Mongolia, has been under lockdown since early October. The residents of the western region of Xinjiang have suffered the most draconian measures, with continuous lockdowns there now exceeding 100 days, including in its capital of Urumqi.

Such stringent lockdowns have led to social unrest. Early Wednesday, violent protests broke out at a Foxconn factory in central China, the world's biggest iPhone plant. Videos posted on social media show hundreds of factory workers clashing with security guards over lack of pay and what workers say are unfair COVID policies.

The restrictions and discontent have put a dent in production. Earlier this month, Apple said in a statement that it has temporarily reduced iPhone 14 production because of COVID-19 restrictions at its primary iPhone assembly plant in China.

The unrest highlights the tensions between Beijing's rigid COVID rules and its urge to resume the economy. But until more concrete directions come from the central government, local authorities will be forced to square competing objectives. 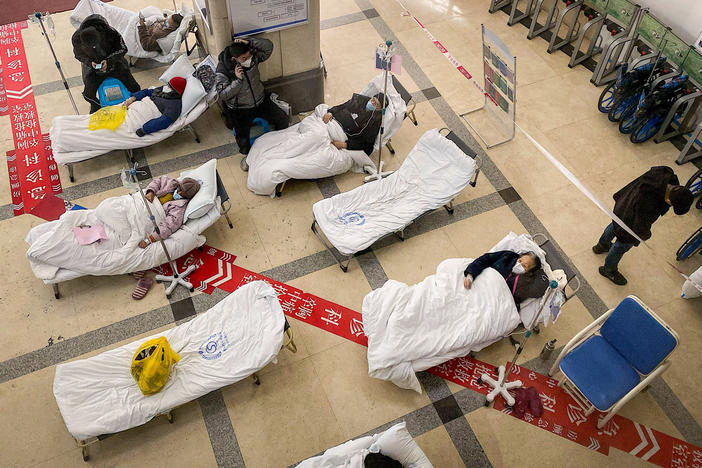 Health officials are concerned that people traveling home to their villages for the Lunar New Year could turn celebrations into superspreader events, catching ill-prepared rural systems off guard. 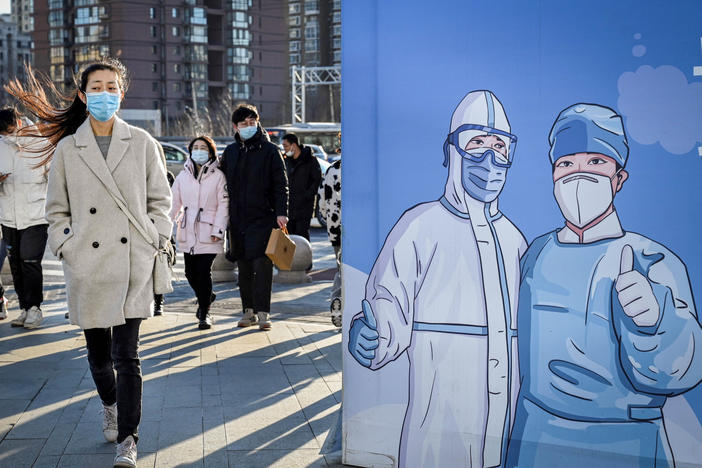 The reluctance of many citizens — especially the elderly — to get vaccinated is a problem for a government facing intense pressure to roll back strict COVID policies. 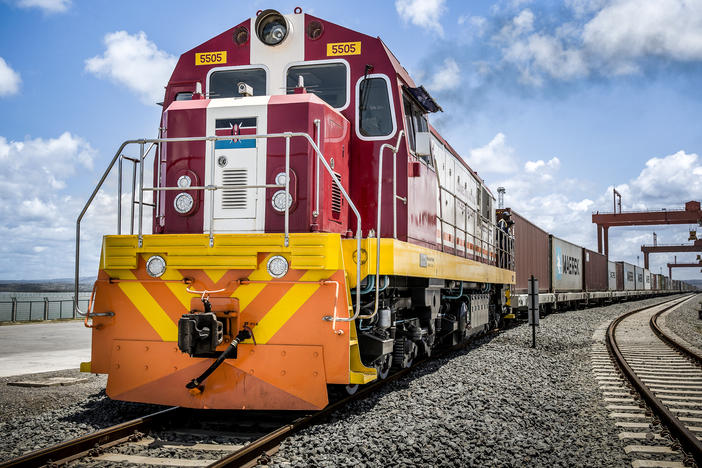 China lends billions to poor countries. Is that a burden ... or a blessing?

China doles out much cash for infrastructure. It must be repaid. Is that frustrating for recipients? A new survey has a surprising answer. But skeptics wonder: How honest were the participants?