Coronavirus FAQ: I'm a one-way masker. What strategy will give me optimal protection? 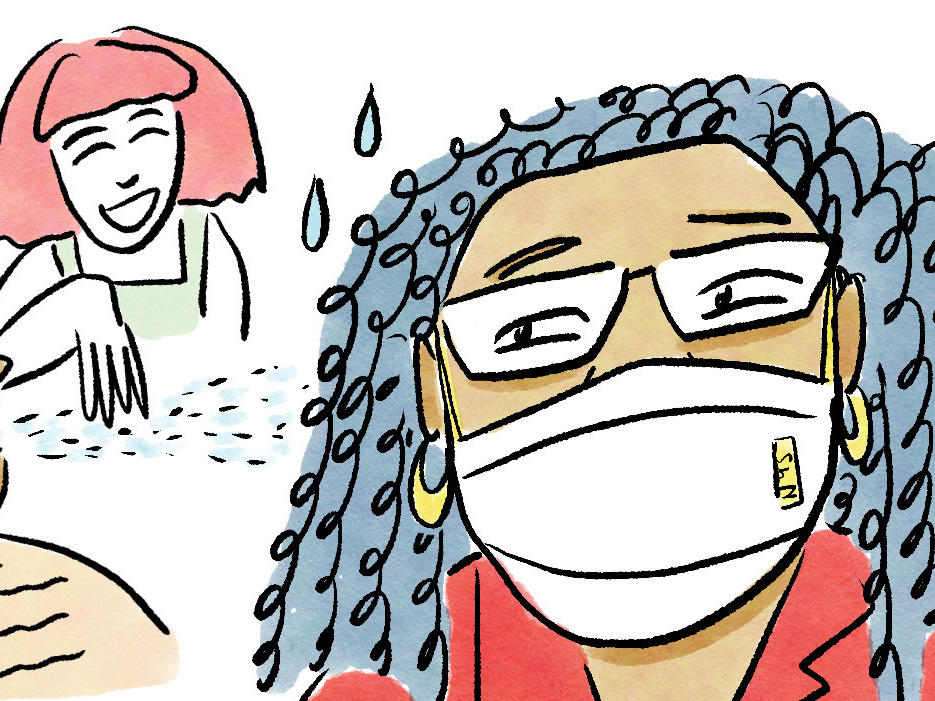 Each week, we answer frequently asked questions about life during the coronavirus crisis. If you have a question you'd like us to consider for a future post, email us at goatsandsoda@npr.org with the subject line "Weekly Coronavirus Questions." See an archive of our FAQs here.

Lots of people are giving up masks in public places — maybe they think the pandemic is over, maybe they're putting their faith in vaccines, maybe they're just tired of masking. But I still want to mask up when I'm around others — omicron is out there, infections can happen if you're vaccinated. Is one-way masking — wearing a mask — helpful in any way?

It can be lonely out there as the solo masker in a sea of exposed chins and noses.

And there's no getting around the fact that having everyone wear a mask cuts down the risk of spreading the coronavirus in a public space much more effectively than a scattershot approach.

"One-way masking isn't doing that," says Kristen Coleman, an assistant research professor at the University of Maryland School of Public Health. "We're not maximizing the benefits of masks [if] only a proportion of the population" wears them.

But it looks as if an end to mask mandates will increasingly be the reality, given the Centers for Disease Control and Prevention's new guidance that much of the public can forgo masks if local hospitals are not dealing with a high level of disease.

But if you plan to continue wearing a mask, you can still get substantial protection as the sole mask-wearer — what's being called "one-way masking" — if you do it right.

If it's pouring outside, would you throw on a cotton hoodie and expect to stay dry?

The same principle applies to masks and pathogens.

Unlike a cloth or surgical mask, an N95 respirator (as well as similar products, like a KN95 or KF94) is specifically designed to filter out the tiny viral particles that stay suspended in the air when exhaled by someone who's infected — and not just the larger respiratory droplets that spray out like cannonballs and fall to the ground at close range.

(These models are often referred to as masks but are technically known as respirators.)

"The only thing I recommend is something like an N95 respirator," says Lisa Brosseau, a bioaerosol scientist and industrial hygienist who's a consultant for the University of Minnesota's Center for Infectious Disease Research and Policy.

Lots of studies dating well before the coronavirus pandemic, in the laboratory and in workplaces, demonstrate that fit-tested respirators protect the wearer from hazardous airborne contaminants, she says.

"From Day 1, we have collectively done a poor job at communicating the strong efficacy of N95 respirators," adds Coleman.

Of course, any kind of protection is better than nothing at all. If you have no other options, surgical masks are better than cloth masks because the material has electrostatic charge to trap incoming particles, says Abraar Karan, an infectious disease physician at Stanford University — but if you're serious, don't count on them to keep you safe when most people nearby are unmasked.

Karan has taken care of hundreds of COVID-19 patients over the past two years and knows how well N95s work, even if you're face-to-face with a contagious unmasked person.

"I've been very close to them while they were coughing and weren't able to wear masks and never got COVID from a patient," he says.

The only real downside of wearing an N95 is that some models can compress your face, pinch your nose and make it hard to breathe. The key is to find one that you can tolerate wearing, while making sure there aren't big gaps around your nose or chin (if your nostrils are showing, forget about it!).

"They all feel slightly differently," says Karan, who personally prefers a model made by 3M called the VFlex.

But keep in mind that an N95 on its own isn't foolproof.

Health care workers go through fit tests to ensure the ones they're wearing are sealed properly. Even so, Brosseau says research shows that about 10% of particles will leak through during the normal wear and tear of the day.

Of course, most of the N95-wearing public will not undergo a rigorous fit test. Brosseau had studied this scenario — people who had no prior experience or assistance putting on a respirator. She found that the majority of them could get a fit that would result in about 20% leakage.

This drop in effectiveness should not deter you, she stresses.

"It just means that it doesn't offer that 95% protection that's been advertised, but it's still going to be providing more protection than a surgical mask or a cloth mask," says Coleman.

Figure out how risky a situation could be

Even with a solid choice like an N95, you need to calculate the risks you'll face as a one-way masker.

"Just wearing a mask — it helps, but it is not going to turn being indoors into something that has no risk," says Jose-Luis Jimenez, a professor at the University of Colorado Boulder and an aerosols scientist.

Many of the considerations should feel familiar at this point, if not hard-wired into our pandemic-weary brains.

Poorly ventilated indoor spaces, especially where people are talking loudly, singing or exercising, carry the highest risk. If you do go inside, the safest situation is an uncrowded venue. And the longer you spend indoors, the more you open yourself up to infection.

The final big risk consideration comes down to how many people are contagious in your community. Dr. Lisa Maragakis says you can look at the number of new cases per capita in your community over the past week.

"That number needs to be in the single digits — somewhere between one to five cases per 100,000 — before we've reached that low level where the probability is such that you're less likely to encounter someone with the virus," says Maragakis, who's senior director of infection prevention at the Johns Hopkins Health System.

And remember: There are no hard-and-fast rules.

For example, you can spend the same amount of time in similar indoor spaces, but the chance of infection can go up enormously depending on what people are doing.

"We've seen tons of outbreaks in choirs, none in libraries and movie theaters that I know of," says Jimenez, who has developed a tool that estimates risk in different scenarios.

Some researchers have tried to specifically quantify the risk of being infected when one person is wearing a mask and the other isn't — i.e., one-way masking. But many factors come into play.

One recent modeling study found a 90% risk of being infected after 30 minutes when a person wears a surgical mask and is about 5 feet away from an infected unmasked person. Switching to a respirator drops that risk to 20% over the course of an hour. And if both people are wearing a respirator, it's under 1% in an hour.

Brosseau has also analyzed this kind of scenario, although with a different approach that looks at how long it would take to get a big enough "dose" of the virus that you'd likely be infected. She found it would be about an hour and 15 minutes for someone wearing an N95 (not fit tested) to get infected when in close contact with a contagious person.

Of course, all these estimates are based on certain assumptions and can't be taken as a strict guide. Brosseau's relies on the idea that there's a high risk of infection for two unmasked people in close proximity for 15 minutes — but that time span comes from contact-tracing guidance used by the Centers for Disease Control and Prevention, not data about the virus.

"These are not bright lines between safe and unsafe," she says.

What would they do?

Even among experts, there's considerable variation in how much they're going to rely on one-way masking when infection rates are high in their community.

Karan feels comfortable going into places that would be considered riskier if he's wearing the N95 he likes: "I use that to work out in the gym. I wear it everywhere. I wear it in the hospital or just out and about."

Others play it much safer. Jimenez says he isn't going back to the grocery store yet, even with a high-quality respirator.

Brosseau is back to shopping for groceries but avoids busy times — and still rules out certain destinations. "I haven't gone back to church since the beginning of the pandemic," she says.

What to do about that awkward feeling

As a one-way masker, epidemiology professor Charlotte Baker at Virginia Tech often finds herself one of the few people wearing a mask. And she recognizes that it can be a lonely road.

And don't obsess about the non-maskers around you, she says: "I suggest ignoring people, focusing on the task at hand and getting out of there."

An earlier version of this story mistakenly said Charlotte Baker is a professor at the University of Virginia. She is at Virginia Tech. 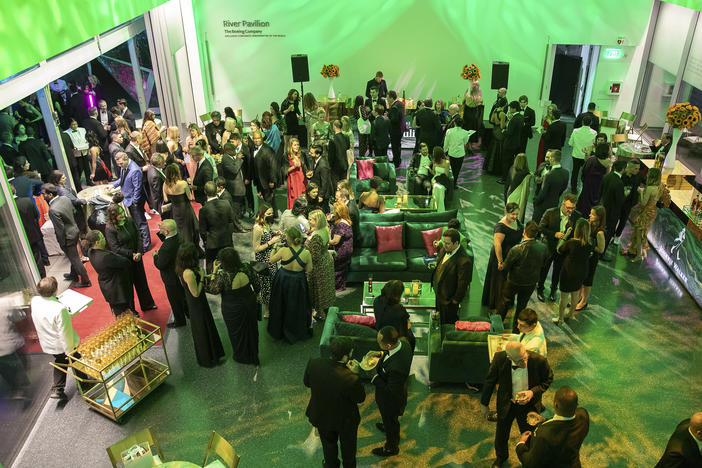 Coronavirus FAQ: Should I go to that party? What do I do if guests got COVID?

Whether it's a wedding, graduation or meeting, indoor events can spread the virus. Here's a complete guide: what to ponder before going, how to cut risks while there, what to do if cases crop up. 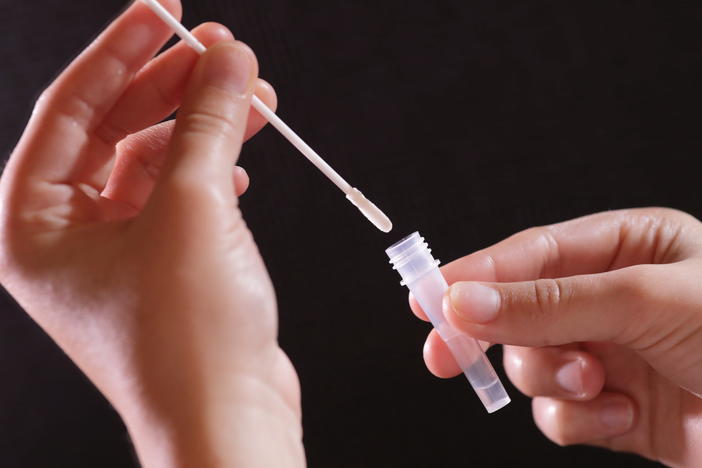 Coronavirus FAQ: Testing confuses me! When to do it? Is 'negative' always reliable?

With COVID case counts falling and rising, testing is critical. But how many days after exposure should I test? And if I have symptoms but test negative, might the test not be accurate? 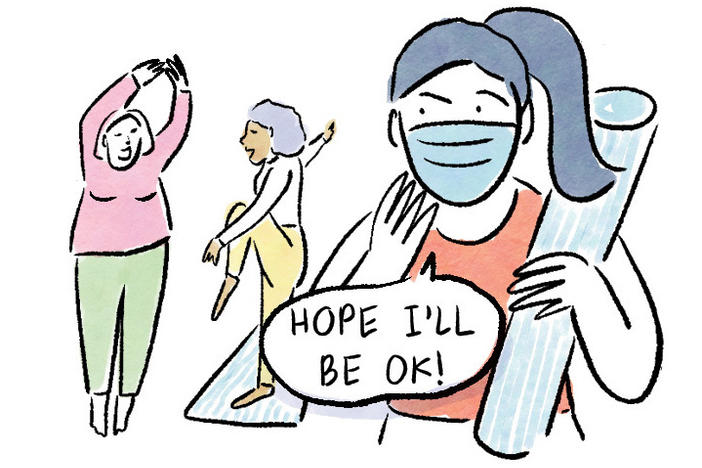 Coronavirus FAQ: Our mini-zine has advice on when & how to dial down COVID precautions

Cases are surging in some regions but dropping in many places. If you're in the latter situation, is it OK to go back to living as you did pre-pandemic? Print our handy zine with advice from experts.