It's A Tricky Balancing Act For Countries Awaiting Vaccine Doses 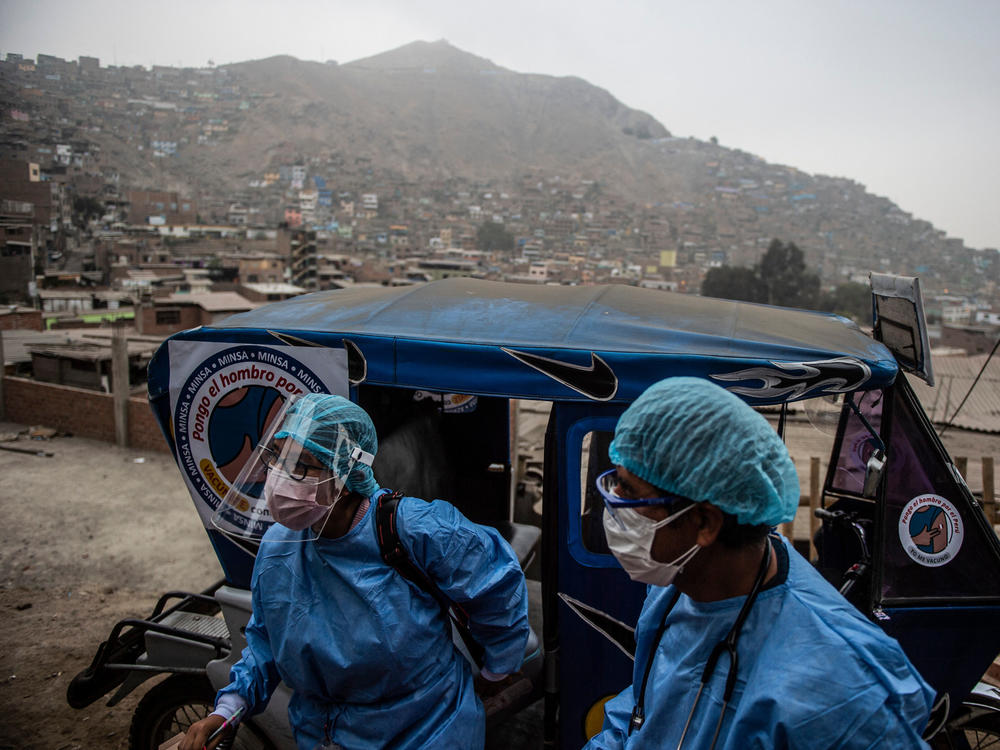 Health workers arrive in a tuk-tuk to administer doses of the Pfizer COVID-19 vaccine to elderly citizens in their homes in Lima, Peru, in April. / AFP via Getty Images

In Peru, Dr. Ramiro Lazo Camposano, a pediatrician, was going door-to-door seeing his patients in the capital city of Lima at a time when most health care workers in the U.S. had already celebrated getting their second shots of the COVID vaccine. But he was not vaccinated. Doses were in short supply across Peru.

Eventually, Camposano, 74, caught the virus and passed it onto his son.

"Both went to the ICU unit, and they didn't make it," says Camposano's daughter Dr. Marcela Lazo Escalante, a physician and medical researcher in Lima. They died in February.

The tragedy of these dual deaths underscores a problem in many countries. Vaccines are showing up late — and there simply aren't enough doses of vaccine yet to make a dent in the pandemic.

That's not the only challenge. Even as millions of donated doses make their way into Africa, Asia and Latin America's lower-resource countries through the global vaccine-sharing program COVAX, they may not have the means to give out shots to citizens on a massive scale.

Yet at the same time, it's hard to gear up. "Without knowing that the doses are going to be there, countries are understandably reticent to use their limited resources" to prepare for vaccine rollouts, says Gian Gandhi, vaccine access coordinator at UNICEF. His agency runs COVAX along with the World Health Organization, Gavi the Vaccine Alliance and others.

"We have a constantly evolving supply chain, different vaccines all coming at different and uncertain times," he adds.

So far, COVAX has only distributed about 91 million of the almost 2 billion vaccines promised this year. Donations are coming in – millions of doses from the U.S. arrived in Bangladesh on Friday to distribute in South Asia, for example. But global delivery has been hampered by delays and uncertainty, including disruptions in the supply of vaccines coming from India.

Then after months of scarcity, countries may need to absorb a "glut of vaccines" very quickly and make use of them before they expire, says Gandhi of UNICEF.

And that's where the logistics come into play. To run an effective vaccination campaign, he says, countries will to tackle many issues: making sure there's a cold chain (the refrigeration required to store doses safely during transport); training health care workers to administer the shots; mobilizing people to show up for vaccinations, especially older and more vulnerable groups; and countering the rampant spread of misinformation.

Each country will have its own barriers to navigate when rolling out the vaccine, says Dr. Bruce Aylward, senior adviser to WHO director-general Tedros Ghebreyesus.

In Africa, many countries, especially in sub-Saharan Africa, don't have the infrastructure and workforce in place to quickly deliver millions of shots to the bulk of their population, says Dr. Javed Ali, emergency response director for International Medical Corps.

Then there are the non-pandemic obstacles, ranging from rainy season to political turmoil, he says.

"There are countries that are dealing with other emergencies," he adds. "Some do not even recognize [vaccination] will be a massive issue."

For every dollar spent on vaccine doses, $5 needs to be spent on delivery, according to one analysis from the nonprofit group CARE. And WHO has estimated the cost of delivering vaccines to 20% of the population in 92 of the COVAX countries could amount to more than $2 billion.

"To run a campaign, you need funding," says Steven Neri, who runs public health programs in Africa for Project HOPE, a humanitarian group. "That's going to definitely be a challenge in many countries."

Despite these obstacles, some countries do stand ready to vaccinate when the vaccines are on the ground. They have already proved they can do so with the limited supply they've received from COVAX.

"The countries in Latin America, for instance, when they receive the vaccine, they are deploying the vaccine very, very fast," says Dr. Jarbas Barbosa, assistant director of the Pan American Health Organization. Many countries have a "longstanding tradition" of conducting large vaccination campaigns, including efforts targeting young adults for influenza, yellow fever and other diseases, he adds.

For example, Brazil could deliver 2 million doses of the COVID vaccine a day if those were available, says Marco Aurelio Safadi, a professor of pediatrics and infectious diseases in Sao Paulo.

"We have the infrastructure. We have the knowledge to vaccinate. We are really prepared," says Safadi. "The only thing that we don't have so far are the needed number of vaccine doses."

It's a similar frustration in Peru where people are generally enthusiastic about getting a shot, says Escalante, the physician and medical researcher in Lima. In fact, the pace of vaccination was picking up when the supplies were available, she says.

With more than 190,000 deaths, Peru has the world's highest rate of COVID-19 deaths per capita: about 1 out of every 169 people. The vaccination campaign kicked off in February and so far has delivered about 6.8 million doses, enough to fully vaccinate close to 9% of the country's population.

"Peru has very good practice with vaccinating. We know how to do it," says Escalante.

And despite the wait, some countries are making inroads with tackling vaccine hesitancy and building trust in the vaccines.

In Bangladesh, Dr. Ikhtiar Uddin Khandaker with the nonprofit CARE says people had all kinds of concerns about the effectiveness or safety of vaccines earlier this year because there was a lack of reliable information for the public to counter misconceptions. But public outreach has changed sentiments considerably in recent months, and he says they are continuing to educate people and show them how to sign up for the vaccines, even though there's a lull in the vaccination campaign. So far, Bangladesh has delivered about 10 million shots to its population of more than 160 million.

"We are not stopping," he says, "so it will be easier and quicker [to vaccinate] when the new [doses] are in place and the communities will feel confident getting it."

A similar shift in vaccine acceptance appears to be playing out in some African countries.

"We struggled initially to get people to volunteer to come in for the vaccination," says Elijah Okeyo, the Uganda country director for International Rescue Committee.

But Okeyo says public acceptance and awareness around vaccines has picked up significantly since March, and the brutal surge in many African countries has only reinforced the importance of getting vaccinated against COVID-19. So far, Uganda has given out more than 900,000 shots.

"Uptake is not a problem." he says. "You walk into different facilities, you find crowds of people looking for vaccines."

With the promise of vaccination still months away for most people, these COVAX countries have a tricky balancing act in front of them: They have to plan a communication campaign to keep people interested and ready to get a shot, says Steven Neri of Project Hope. at the same time they need to set realistic expectations for when that will actually be possible.

"The timing," he says, "is going to be really, really critical." 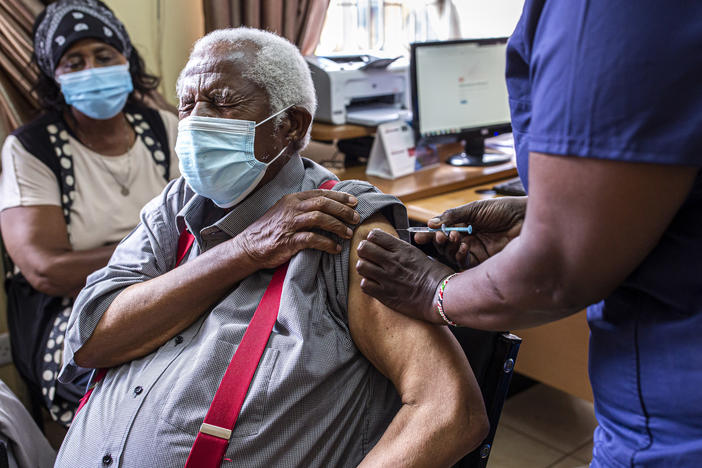 20 Million Africans Are Due For Their 2nd COVID Shot. But There's No Supply In Sight

African nations had been counting on Serum Institute of India for nearly all their COVID vaccines. Now the company says it won't be sending any more for months. And African officials are scrambling. 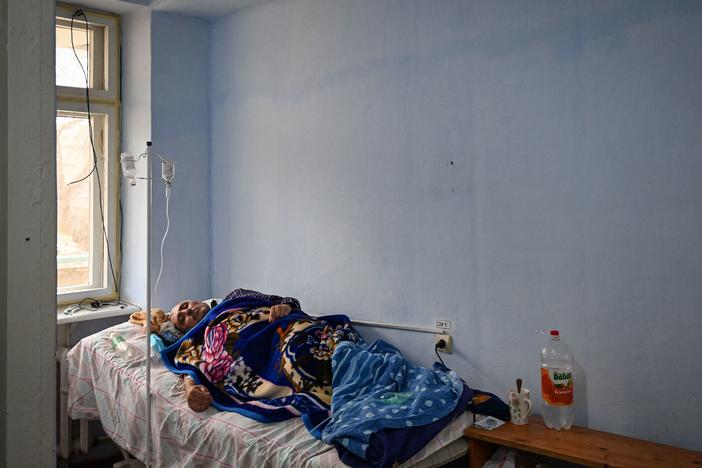 What Is This COVAX Program That The U.S. Is Pouring Millions Of Vaccines Into?

President Biden said the U.S. is distributing them not to curry favor with allies, but to end the pandemic everywhere. And he's doing it through COVAX. 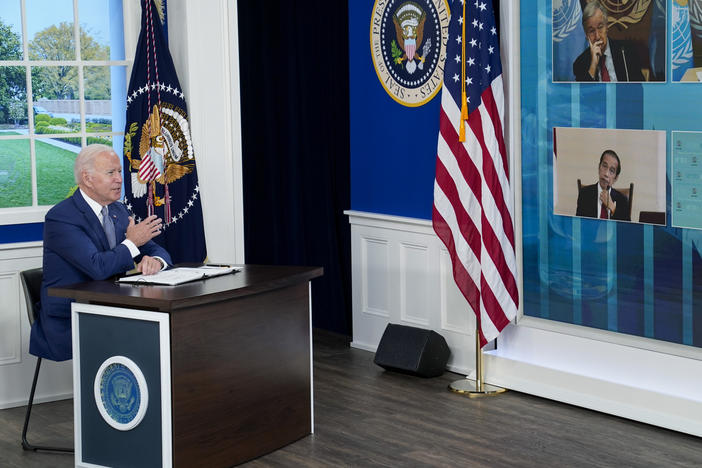 We asked experts from around the world: What would they like to see on the agenda for this virtual event. Their ideas include fair pay for all health workers — and a makeover for foreign aid.