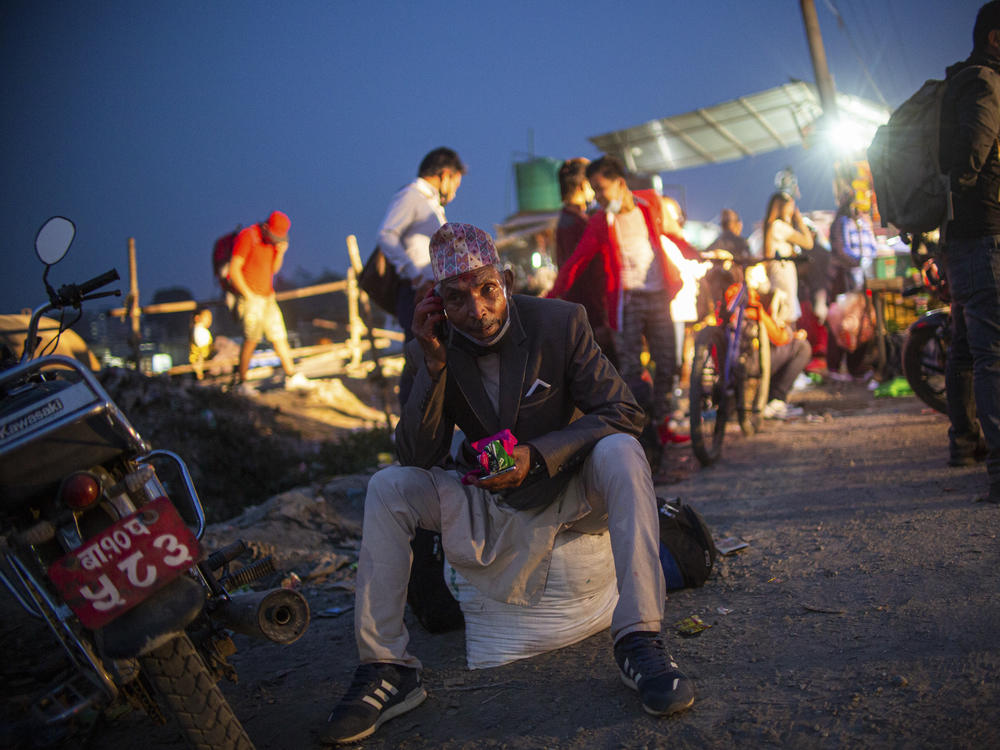 Caption
Villagers wait to board a bus to head home in the wake of government-imposed restrictions relating to COVID-19 in Kathmandu valley.

Editor's note: One of the photographs in this story, of a crematorium, could be disturbing to some readers.

When health workers finally arrived last month in the remote village of Namanta, up in the forested foothills of Nepal's Himalayas, residents hid in their homes.

They'd been advised not to welcome strangers, who might spread the coronavirus. But it was already too late. Out of 64 households in the village, 30 of them had someone who was ill.

Those individuals hadn't been able to get tested though: The nearest coronavirus testing facility was a 3-hour walk away. Nobody who was sick could make it that far.

So as residents huddled in their homes, many of them coughing, they were frightened by the surprise arrival of strangers in surgical masks. One villager made a phone call.

"They called us and said, 'There are these new people in town. They say they're here to help. What should we do?'" recalls Srijana Karki, the South Asia regional director for World Neighbors, a development charity based in Oklahoma.

Namanta is one of dozens of communities across Nepal – many of them high in rugged mountain terrain — where Karki and her colleagues run workshops teaching villagers how to farm their land sustainably, care for livestock and manage natural resources better.

The health workers who arrived in May had been dispatched by World Neighbors. The group's in-person workshops were on hold because of the pandemic, but Karki's staff stayed in touch with residents by phone and had heard reports of illnesses. She knew the village had no hospital or clinic. So she arranged for four health workers to visit the community to test people for the coronavirus and provide medical support.

When the team arrived, it was one of Karki's colleagues, Binu Subedi, who received the call from a frightened villager. Subedi, who is based in a larger town downhill from Namanta, asked them to put her on speaker phone and go house to house – keeping a distance, just standing in the doorways – and hold out the phone to neighbors inside so they could hear her.

"At first they refused to come out of their homes, but I told them to maintain a safe distance and tell the doctors all the health issues they are facing," Subedi recalls. "Eventually they came out one by one and underwent testing."

This is an example of the challenges and lengths caregivers must go to in battling one of the world's most severe COVID-19 outbreaks in this landlocked, mountainous and impoverished country of about 28 million people, wedged between India and China. The World Bank estimates that about a third of Nepalis live close to the poverty line.

The pandemic is collapsing their already meager health system.

Millions Cross the India-Nepal Border, Some Carrying the Coronavirus

Nepal has been hit in recent months by the same COVID-19 outbreak that's raging in neighboring India. The country's Health Ministry says 97-percent of the cases it has sent for genomic sequencing reveal the B.1.617 variant first discovered in India.

The two countries are close physically and culturally. They both have Hindu majorities and share a porous 1,100-mile border. Millions of Nepalis work in India, and many of them traveled home to Nepal this spring, fleeing municipal lockdown restrictions during India's own COVID crisis. Remittances from abroad have slowed.

As Nepal struggles with the disease, there are also worries about a backlash: Dr. Lhamo Yangchen Sherpa, an epidemiologist based in Kathmandu, says migrant workers are being unfairly scapegoated for the virus. They're often among society's most vulnerable and poor already. 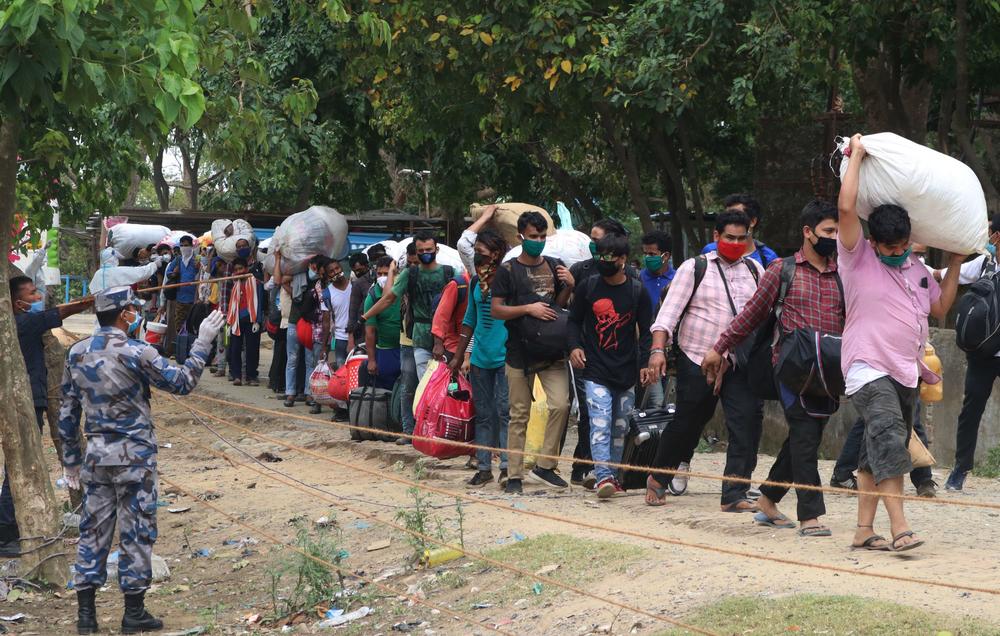 Caption
Nepali migrant workers return to Nepal at the India-Nepal border in Dhangadi, some 400 miles west of Kathmandu. Returning workers are often stigmatized because of fears they could be bringing the coronavirus pathogen from hard-hit India.

"A lot of people have started to blame the migrant workers, but they are not the only carriers. The other one is also our [former] king," says Sherpa.

Nepal's 73-year-old former king Gyanendra and his wife Komal reportedly tested positive for the coronavirus upon returning home in April from the Kumbh Mela, a giant Hindu pilgrimage in northern India, where millions of devotees took a ritual dip in the Ganges River – with little social distancing. Hundreds of thousands of Nepalis took part. The former royals were hospitalized in Kathmandu and have since recovered.

Sherpa says the royals' experience shows it's not just migrant workers bringing the coronavirus into India. Rich and poor Nepalis alike pass back and forth over the Indian border.

Even before the coronavirus hit, rural Nepalis in particular had little access to medical care. In the United States, there's roughly one doctor for every 385 people, according to World Bank data. In Nepal, the ratio is one doctor for about 1,430 people.

But most of Nepal's health workers are based in the capital Kathmandu and its surrounding valley, leaving huge swaths of the country with no doctors at all. So in rural Nepal, access to health care is almost negligible: The ratio is one doctor for every 150,000 people, according to another survey. 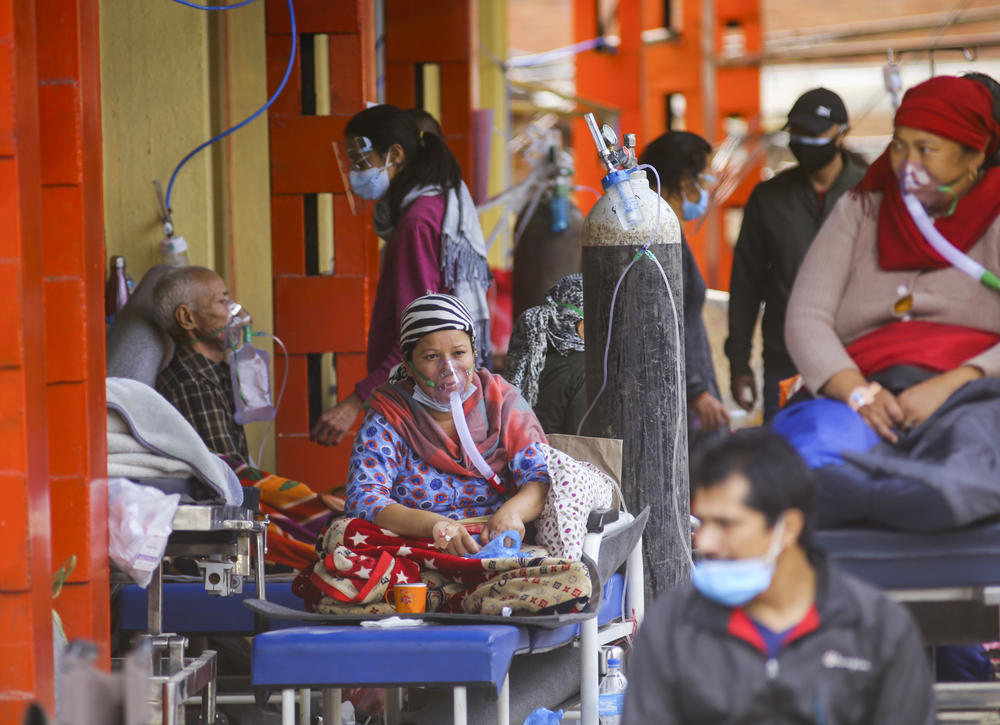 Caption
COVID-19 patients in Kathmandu receive oxygen as they wait outside a hospital for coronavirus patients that doesn't have enough beds for all those diagnosed. The photo was taken on May 13.

That was the backdrop for the country's worst COVID-19 outbreak, which began when cases started creeping up in April. Throughout May, Nepal confirmed its highest-ever daily tallies of new coronavirus cases – between 8,000 and 9,000 a day. A government dashboard shows nearly the whole country colored red, signifying the highest concentration of cases.

More than 580,000 Nepalis have become infected since the pandemic began, and the country has suffered more than 7,700 deaths. That means more than 2% of Nepal's population has tested positive for the coronavirus. By comparison, data from John's Hopkins University show about 1% of Americans have tested positive – in a much better-resourced health system. 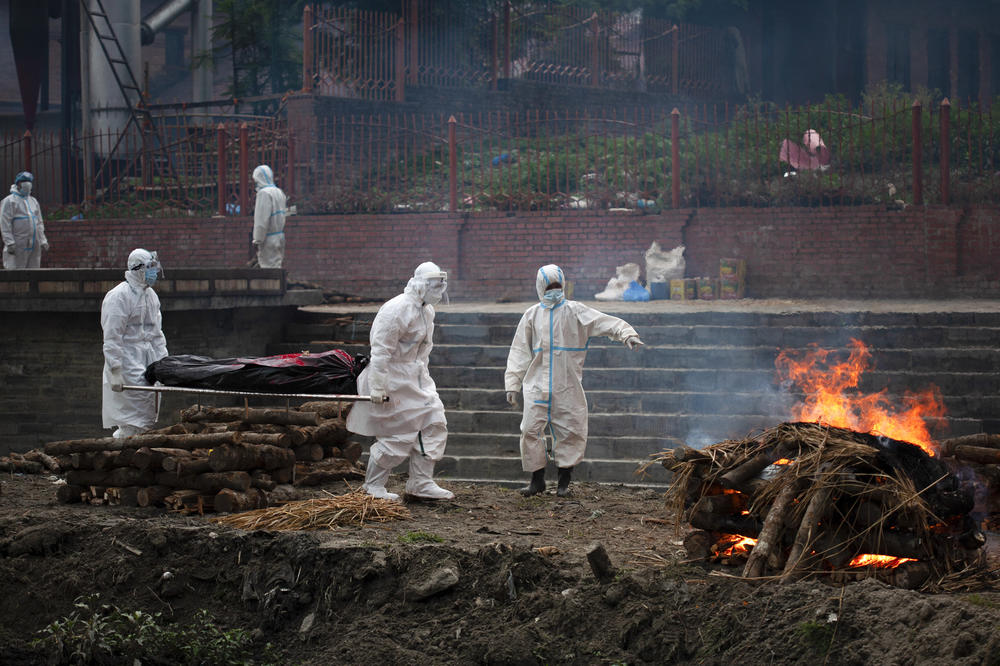 Caption
Workers in protective gear carry the body of a person who died of COVID-19 or cremation on the bank of Bagmati River in Kathmandu. As a wave of infections sweeps Nepal, the only crematorium in Kathmandu Valley is struggling to cope with the flow of bodies.

Nepal's numbers are likely to be a vast undercount though, because testing is inadequate across most of the country.

"High up in the mountains, health facilities just don't exist," Karki explains. "The communities we work in are quite spread out, like there are four houses in one cluster, and another five houses 20 minutes' walking distance [away] in another cluster. So it's really, really difficult."

Nationwide, about 40% of coronavirus tests are coming back positive. But it can take up to two weeks to get test results. During that time, the infected person might spread the virus to many in their community.

While Nepal's outbreak appears to have originated in India, so too do many of the medicines and medical supplies used in Nepal. They're imported from India — and that's posing a problem now, as COVID-19 collapses supply chains on both sides of the border.

Earlier this year, when coronavirus cases were relatively low across South Asia, India donated one million doses of AstraZeneca's COVID-19 vaccine to its northern neighbor. The Nepali government also procured more doses from the World Health Organization's COVAX program, and from China. It ordered at least one million additional doses from the Serum Institute of India, the world's largest producer, and paid for them.

But in March, as India's own coronavirus caseload began to spike, the government halted exports. Nepal never got the remainder of its order. Many residents who'd received a first AstraZeneca dose were unable to get their second shot.

This week, China donated to Nepal another one million doses of its Sinopharm vaccine. The government is allocating them to residents age 60 and up. But overall, fewer than 3 million COVID-19 shots have been administered in Nepal so far. Barely 3% of residents have had both doses. 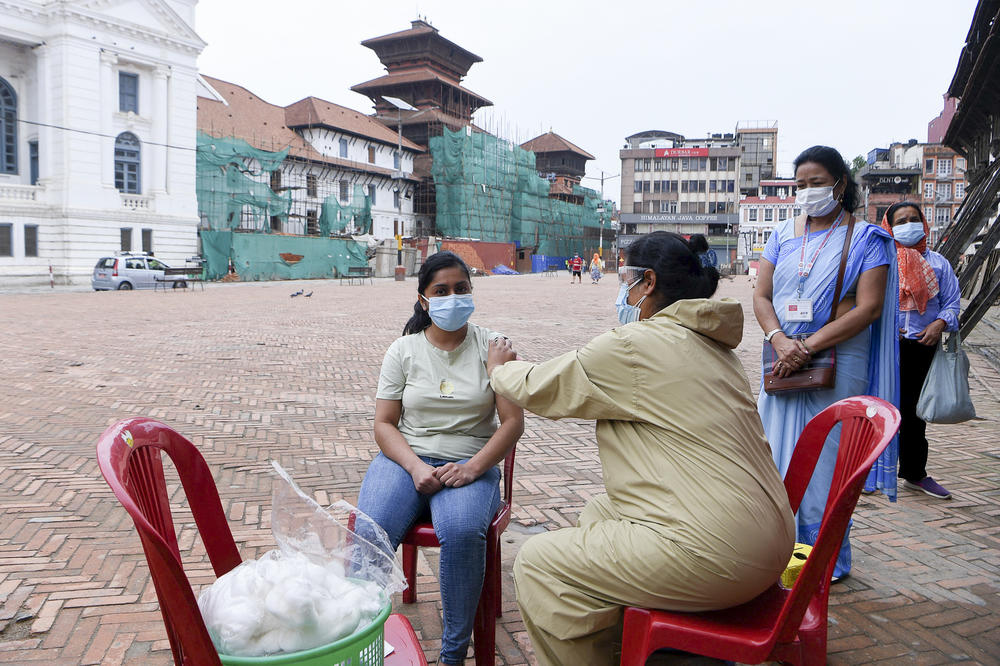 Caption
A health worker inoculates a woman in Kathmandu with a Chinese-made vaccine.

This crisis comes at a particularly unstable period in local politics: Nepal's president dissolved parliament last month for a second time in less than six months. Early elections are scheduled for November, though the courts are weighing several legal challenges to that. The turmoil has sent protesters into the streets despite orders to stay home amid the coronavirus threat.

Meanwhile, record numbers of fresh COVID-19 cases have overwhelmed even the best-equipped urban hospitals in the capital Kathmandu. The scenes are similar to those in neighboring India: Sick people dying in hospital parking lots, unable to get care. Others dying at home, unable to find an ambulance. Shortages of hospital beds, oxygen and anti-viral drugs.

'A Situation For Which We Were Not Trained'

Dr. Anup Subedee, an infectious disease specialist in Kathmandu, says his phone has been ringing off the hook.

"Very frantic calls asking, 'Save my father's life! Arrange an ICU bed!' — which we are almost always unable to do," Subedee says. "It's those kind of calls in the middle of the night. So it's mentally very taxing."

He works at HAMS Hospital, an elite private facility in the capital. But even there, the past few weeks have been brutal, he says.

"We couldn't admit new patients at all, because admitting someone new means we would not be able to provide enough oxygen for someone already in the hospital. So we had to turn away a lot of patients coming in very sick. We couldn't even advise them where else to go," he laments. "That was something we could not forgive ourselves for. It's a situation for which we were not trained."

Subedee says caseloads have stabilized at his hospital in recent days. He's cautiously optimistic Kathmandu's wave may be plateauing. But he says infections now appear to be rising in smaller towns and villages.

"There are numerous people with cough and fever, and no test kits available for them at all – needless to mention, any contact-tracing, quarantine or isolation facilities for them," Subedee says. "So I'm sure people are dying completely undiagnosed even without the dignity of even having a [coronavirus] test."

COVID Atop the World's Highest Mountain

Nepal's COVID-19 outbreak has even spread to the highest point on earth: Mount Everest, on Nepal's border with China. Trekking guides say at least 100 people — climbers and guides — have tested positive at Everest base camp, though Nepal's government has denied that.

"Everest to them represents a source of revenue. But there are a lot of tourists and local climbing guides who are already sick," Sherpa, the epidemiologist, says. 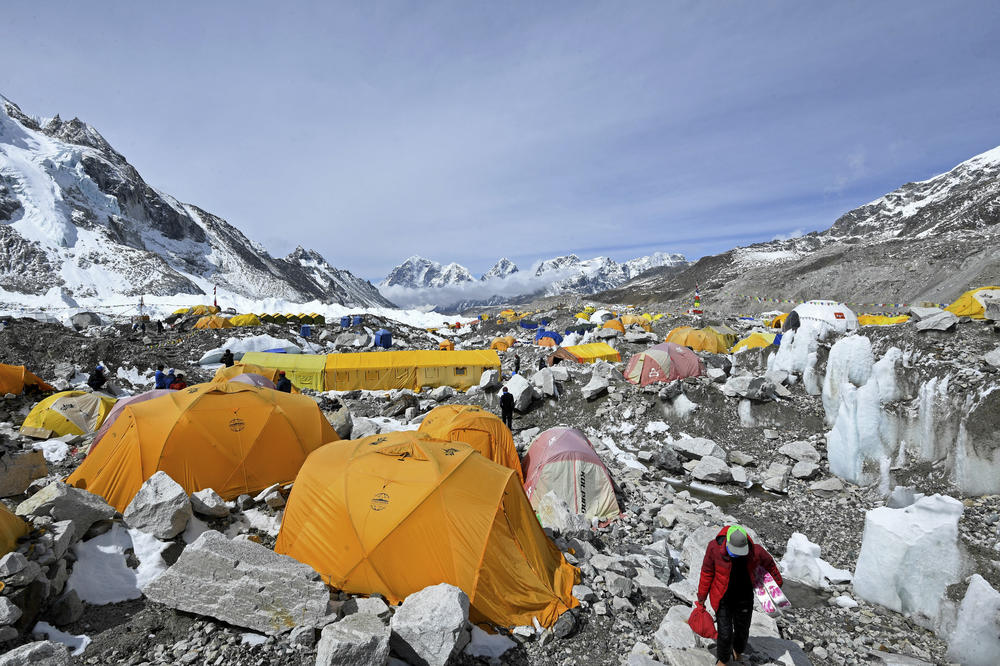 Caption
Nepal is allowing Mt. Everest climbs — an important part of their economy — despite the risk of COVID-19. Guides say at least 100 people have tested positive at Everest base camps (pictured, above), though Nepal's government has denied that.
Tags: COVID-19  kathmandu  pandemic  coronavirus  Mt. Everest 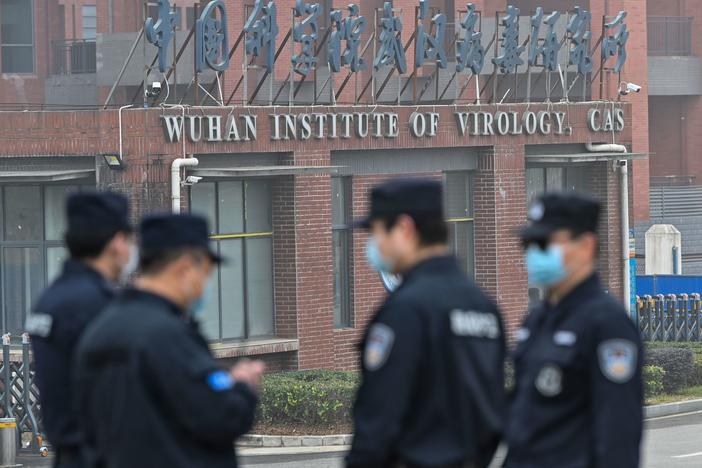 The Investigation Of The Pandemic's Origins Is At An Impasse

In the wake of heated debate over the unproven lab leak theory, the world is calling on China to cooperate with investigations. But efforts to delve into this matter seem to be stalling. 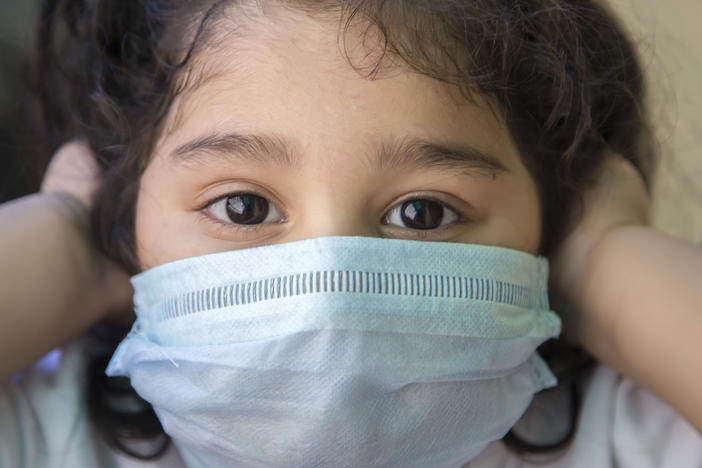 Kids In India Are Asking Heartbreaking COVID-19 Questions. Here's How To Answer Them

As the country faces the world's worst coronavirus crisis, children want to know: Will I catch it? Will grandfather die? What's it like to be an orphan? 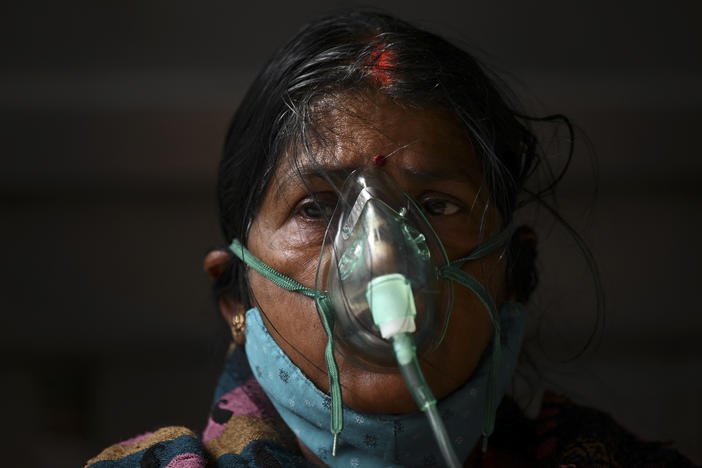 Why Is India Running Out Of Oxygen?

Hospitals don't have enough oxygen for patients on ventilators. There are delivery bottlenecks. Families are sometimes told to get their own supplies. Health experts say it didn't have to be this way.