20 Million Africans Are Due For Their 2nd COVID Shot. But There's No Supply In Sight 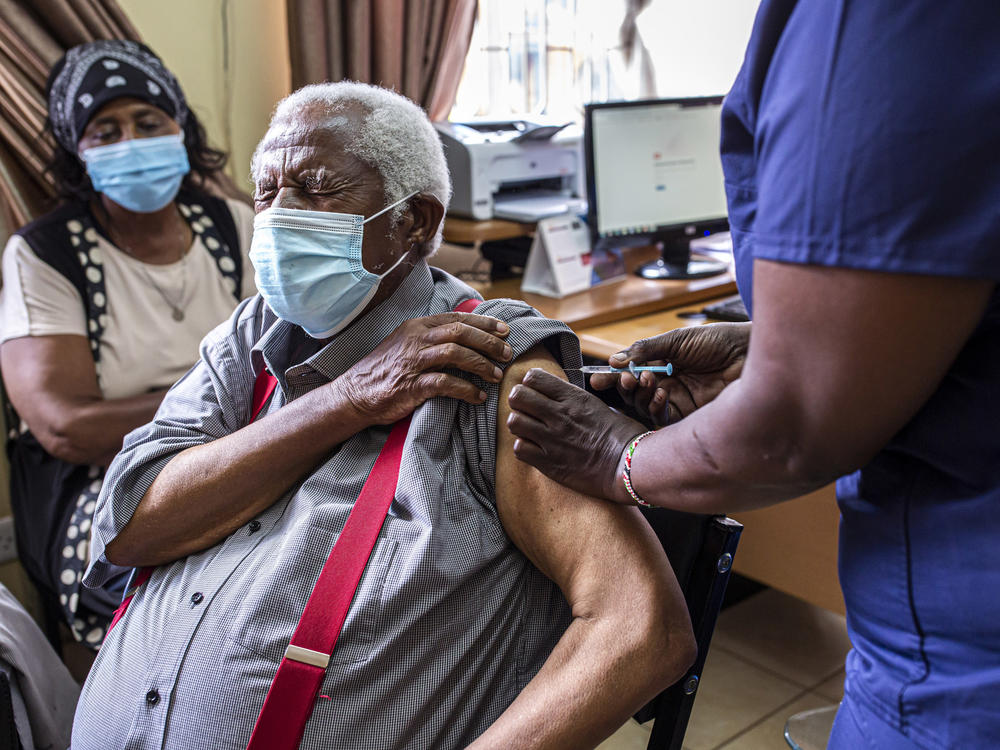 An older person receives their first dose of the AstraZeneca vaccine in Thika, Kenya. The vaccine's manufacturer, Serum Institute of India, announced this week that it will freeze all exports of the vaccine through the end of this year — leaving 20 million people in Africa without a source for their second dose. / Bloomberg via Getty Images

When COVID-19 cases surged in Malawi in January, Alinafe Kasiya's family was hit hard. The disease killed his sister — a healthy, gregarious woman who was the heart and soul of their clan — just before her 44th birthday. Then another sister who had cared for the first came down with symptoms. Then Kasiya's 13-year-son got sick while at boarding school. Kasiya wasn't even allowed to visit the boy while he recovered.

So in mid-March, after the first doses of COVID vaccine finally started reaching Malawi and Kasiya got his shot, he says it felt like "one of the most significant moments in my life."

Now he's not so sure. That's because the vaccine Kasiya got is AstraZeneca, which means he needs a second dose 12 weeks after the first. And right now it doesn't look like Malawi is going to get any more doses.

The manufacturer that Malawi was counting on, a private company called Serum Institute of India, or SII, stopped any further exports in late March — when COVID cases suddenly started spiking in India and the company faced pressure to redirect all its doses for India's domestic use. This week SII announced the export freeze will continue through the end of the year.

Kasiya, who is country director for VillageReach, a nonprofit that helps Malawi's government with vaccine rollouts, says he feels like all his relief and hope is being snatched away: "You feel the gains that were made with the first jab will be kind of deleted. So this was all for nothing."

Across Africa, about 20 million people are in the same quandary: Due for their second dose by the end of June with no supply in sight. And that's not even counting nearly 50 million people in Africa who were supposed to get their first doses of AstraZeneca in April and May.

More than 90% of those doses — along with most of Africa's vaccine supply for the rest of 2021 — was slated to come from that same source: SII. The doses were purchased on behalf of African countries by COVAX — an international collaboration set up to ensure low- and middle-income countries could get at least some vaccines after wealthy countries snapped up practically all the early supply.

"We have been thrown into total confusion as to where we should reach out to get the additional doses," says Dr. John Nkengasong, head of the Africa Centres for Disease Control and Prevention — an agency created for the region by African governments.

He noted that while the COVAX purchase is not the only source of vaccine for African countries, most doses obtained through other means won't be available for months. That includes deals that a few African governments had arranged directly with manufacturers, as well as several buys negotiated by the African Union — a coalition of African countries — for tens of millions of additional doses of various vaccines to be distributed across the continent.

The unraveling of Africa's vaccination plan is especially galling, adds Nkengasong, because it was already quite limited to begin with. Even if SII hadn't fallen through, the combined efforts of COVAX and the African Union were only going to provide enough vaccine to cover about 40% of the population in most African countries over a period of many months. And those who were going to be getting their doses this spring — and who have now been left without — represent just the highest-priority sliver of African populations: health care workers and other essential personnel and as well as the elderly. To date, less than 2% percent of people in Africa have gotten a shot.

Phionah Atuhebwe, who coordinates the introduction of new vaccines in Africa for the World Health Organization, says she worries about the fallout if an India-level COVID outbreak were to hit the continent.

Already, the the variant driving India's COVID surge has been found in several African countries. And Atuhebwe notes that reported coronavirus cases are starting to rise again in nations such as Angola, South Africa and Uganda. The African continent has already gone through two prior surges of COVID, she says. Now, "we are really preparing for a third wave."

At a minimum, Atuhebwe says this means working "night and day" to figure out how to help people who are waiting on their second dose of vaccine.

Atuhebwe says they're also looking to see if production could be ramped up by another manufacturer of AstraZeneca that is located in South Korea.

And, says Atuhebwe, "if worse comes to worse" maybe a different vaccine could even be used for dose two. African nations are unlikely to get enough doses of vaccines such as Johnson & Johnson, Moderna or Pfizer in time to be used as a second dose in most cases, she says. But it's possible the evidence will show that other vaccines could be used for the second dose that might be more readily available to African countries, such as several vaccines produced by China and Russia.

But Atuhebwe says the fastest solution is far simpler: Wealthy countries should share their own doses of AstraZeneca with African countries immediately.

She says she's heartened by some recent pledges to do so by France, Sweden, Norway and most recently the United States. But she says far more donations are needed. 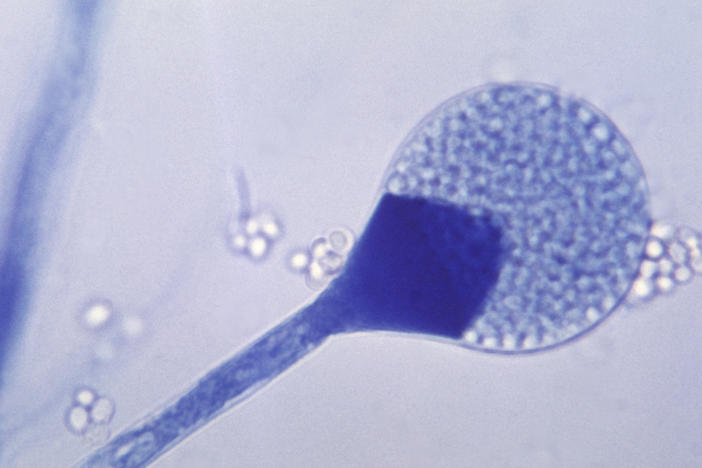 What Is 'Black Fungus'? And Why Is It Spreading Among India's COVID Patients?

Doctors say India's battle with COVID-19 has led to an unprecedented rise in mucormycosis, a rare but dangerous fungal infection that preys on people with weakened immune systems. 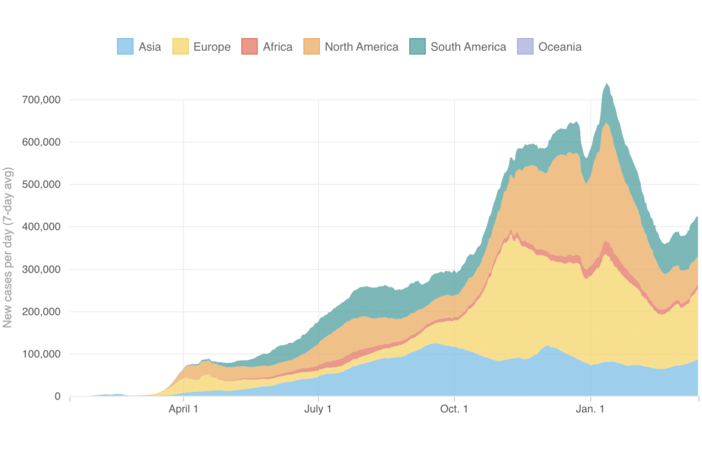 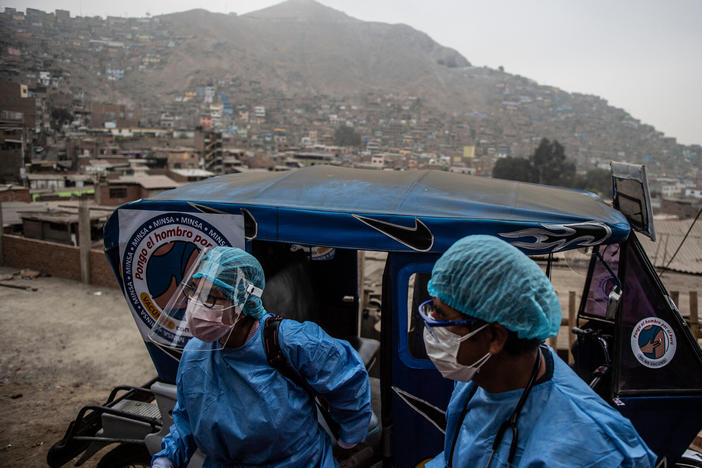 It's A Tricky Balancing Act For Countries Awaiting Vaccine Doses

They have to figure out how to distribute the vaccines — and keep their citizens interested in getting their jab — without knowing when supplies will arrive.