A Doc Was Mad That People Die From Preventable Diseases. So He Wrote A Book About It 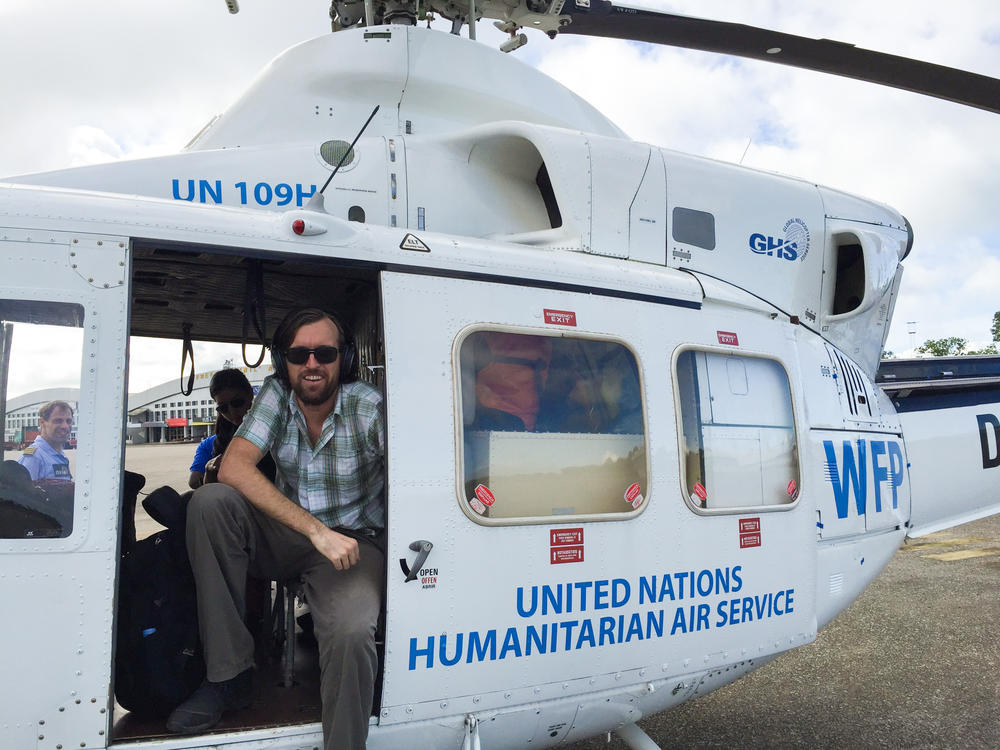 Dr. Eugene Richardson in a helicopter during the Ebola outbreak in Sierra Leone, where he worked as a clinical lead for Partner in Health's response to the outbreak. He is the author of the new book Epidemic Illusions: On the Coloniality of Global Public Health. / Katie Barron

Dr. Eugene Richardson has spent most of his adult life working as a physician and an anthropologist in countries such as the Democratic Republic of Congo, Peru, South Africa and Sudan.

No matter where he went, he was perplexed by this public health conundrum:

"The world has the resources to prevent all these senseless, tragic deaths, but we don't do it," says Richardson. "There are still famines. There are still people dying of measles and HIV and diphtheria. Why?"

That's what Richardson explores in his new book, Epidemic Illusions: On the Coloniality of Global Public Health, published by MIT Press.

It's not a new topic. But his book is drawing attention and praise. "This is the first time I've seen the whole [global health] system described as a system of coloniality," says Dr. Tammam Aloudat, a Syrian physician and senior strategic adviser for Doctors Without Borders' Access Campaign.

We called Richardson, an assistant professor of global health and social medicine at Harvard Medical School, to discuss how he sees colonialism still influencing outcomes in global health.

First things first: Why are you, a 45-year-old white upper-middle-class male from Florida, writing about coloniality?

I've been living or working in the Global South [lower-income countries] since the late '90s, and it always struck me that people were dying of preventable diseases in high numbers. As part of the global health apparatus and as someone who is part of elite and historically racist institutions [like academia], I have an opportunity to use my position to scrutinize how these institutions do harm.

So what did you find?

Often people [from wealthy Western nations] ascribe these unnecessary deaths to backward cultures – people don't trust vaccines – or such poor governance and corruption that they can't build good hospitals or distribute vaccines regularly. But when you start spending time in these places and talking to people, you realize that actually, these underdeveloped health infrastructures are purposefully underdeveloped.

In your book, you explain that health systems in lower resource countries are being neglected as a way to keep them dependent on wealthy donor countries. Is that what you mean by the phrase "purposefully underdeveloped?"

Yes. It's all part of a continuation of the power imbalances that were established through slavery and 400 years of colonialism – what Global South scholars call "coloniality." Kwame Nkrumah, the first president of Ghana, wrote a book in the 1960s that essentially said, even though we've achieved political independence, we're still colonized economically [through resource theft, unfair trade agreements and other exploitative financial measures] and mentally by places like France, the U.K. and the U.S. Basically, we've moved from a regime of colonialism to coloniality.

And what do you mean by "mental coloniality?" What does that look like?

One example I used in my book is from the [2018 to 2020] Ebola outbreak in the DRC. I was working for the World Health Organization there in 2019 when a group from Harvard did a study trying to explain why it was such a huge outbreak. They found that people were believing in misinformation and conspiracy theories and essentially concluded that these people had their own ignorance to blame.

But when I interviewed people [in 2019], they described a history of brutal violence and exploitation at the hand of King Leopold and the Belgians. They knew how the U.S. and Belgium colluded to assassinate their first legally elected prime minister, Patrice Lumumba, [in 1960]. And after that, when President Mobutu Sese Seko was installed as a puppet Cold War dictator [from 1965 to 1997], he allowed our corporations to drain the country of money and natural resources.

So what sounds like people not believing in science turns out to be people who are so used to being preyed upon that any time foreigners show up in white Jeeps, they react as if it's a plot to harm them. It's actually really logical. But coloniality tries to dictate how people perceive the world around them. It deems its view as the only legitimate scientific interpretation.

How would you suggest that we respond to future outbreaks in places like the DRC?

The solution isn't just to say, "We're going to change your opinion. Read this pamphlet. This is actual science." It's acknowledging the way people see the world and allowing that view a seat at the [decision-making] table. And it's repairing the colonial legacy that has led to that way of thinking. Instead of pamphlets, you would think about reparations [money or land payments to make amends for the colonial era and slavery].

You'd also think about fixing unfair trade agreements and dismantling intellectual property rights so that places like India, South Africa and Brazil can manufacture enough COVID-19 vaccines for everyone.

Speaking of COVID-19, is there anything in your research that explains some of the inequities among different racial groups in the current pandemic?

Black individuals are dying two to three times more than white people in the U.S. from COVID, not because of co-morbidities, but because of exposure risk from precarious housing, overcrowded housing and frontline work. But the models don't include things [to reduce exposure risk for Black communities], like investments in housing and reparations.

I've been using the example recently of the COVID-19 models by the Institute for Health Metrics and Evaluation (IHME), [which predicts the scope of the pandemic and how social distancing and wearing masks would affect it]. Not only did they completely underestimate the pandemic, but [the models] also served racist purposes because they don't include anything about reducing disparities.

Instead, by the IHME saying "Let's just wear masks and social distance," they envision a future with less infections overall, but the infections will still be three times higher for Black people.

I'll be honest. This book is a bit daunting for the average reader. Who did you have in mind when you wrote the book, and what do you hope they take away from it?

Students. They're the ones who have the ability and energy to change things. So for them, and anyone who's interested in dismantling institutional racism, I hope they're inspired to be both a scholar and an activist. It's hard to proverbially teach the old dog new tricks.

Joanne Lu is a freelance journalist who covers global poverty and inequity. Her work has appeared in Humanosphere, The Guardian, Global Washington and War is Boring. Follow her on Twitter: @joannelu 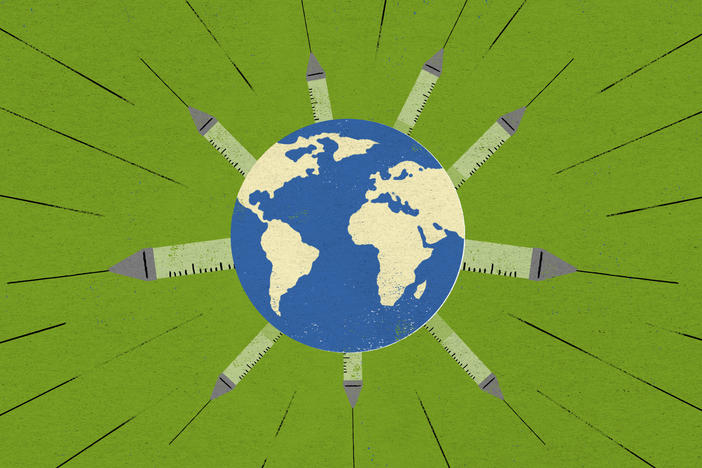 Opinion: 5 steps we must take to vaccinate the world's vulnerable—and end the pandemic

Three doctors present their proposal to get vaccines to everyone in the world. "We already have the resources, knowledge and systems," they write. Global leaders just have to make it happen.

Since the outbreak began in September, eight children have died — and there is no approved vaccine. But doctors are hopeful that public health measures may be enough to stop the spread. 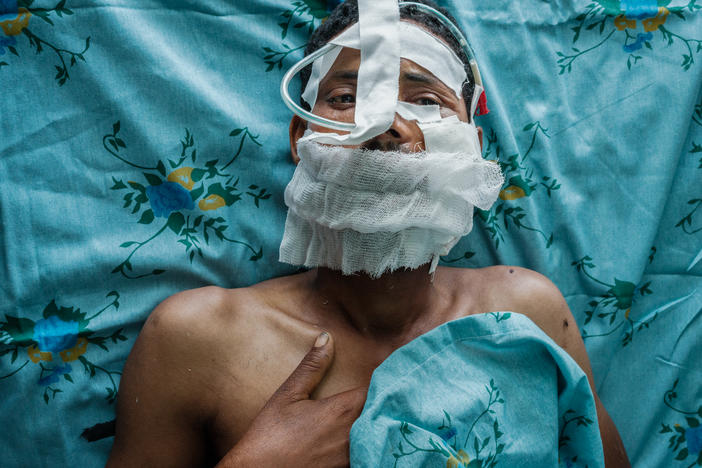 'Where is humanity?' ask the helpless doctors of Ethiopia's embattled Tigray region