The unemployment rate in this country went up slightly in the most recent report. It went up even though many employers say they are desperate for people to work, which raises a question - are people parking for a while with generous benefits? That, at least, is what some Republican lawmakers have maintained. Dan Alpert, a senior fellow in macroeconomics and finance at Cornell, does not entirely disagree, but he offers a different idea of what it means in The New York Times. Welcome to the program.

INSKEEP: Why do you think some people are not returning to work?

ALPERT: Well, we've got three problems. We are paying substantial federal benefits to the unemployed. Roughly on average across the country, that comes out to about $750 a week in benefits, including the state benefits and the federal supplement. And for the next 12 to 13 weeks, employers in low-income sectors will have problems getting the unemployed who are still receiving these payments back to work. It's just common sense. If you're paying $500 a week to your employees, you're not going to get somebody who's receiving $750 in benefits back to work. And so, you know, I guess the good news there, it's a great time to be a teenager looking for a summer job. The problem is this only goes on for the next 12 to 13 weeks.

You know, on the other hand, we're going to be seeing about 15 million people who are receiving in total about $10 billion in federally subsidized benefits losing these benefits over this period of time. Now, hopefully, the economy is opening up and they'll be able to find jobs. But as a practical matter, if we don't - if we terminate those benefits earlier, as many Republicans have suggested, what we're going to be doing is bringing forth forward actually a contraction in spending. And that's really going to be a problem for people going forward, not just for the households but for the local economies as well.

INSKEEP: I wonder if what you're driving at is not that unemployment benefits are too high but that wages are too low?

ALPERT: Well, that's exactly the point because the jobs that remain unfilled in the economy are collectively concentrated amongst 45 million jobs that we've been overly dependent upon that pay $750 a week or less. And on average, those 45 million jobs pay only $500. So you're talking about spending that's going on in the economy to the extent of this $10 billion a week that's going to be eliminated when these people resume those low-income jobs. And that's a big problem for the recovery from the pandemic.

INSKEEP: Oh, you're saying that as people return to work, the economy could in some ways get worse to the extent that it's supported by spending.

ALPERT: Exactly. That is the problem that faces us this fall. And then there's another problem. We're talking about 15 million people, some of whom were self-employed before the crisis who are receiving these benefits. Well, you better hope that there are enough jobs from both third-party employers and people who employ self-employed and freelance workers to re-employ these people at decent wages in order to replace that $10 billion a week in transfers that are going to households that - you've got to assume at the level that people make $750 a week, they're spending pretty much all that money into the economy. So to the extent that you remove that money, you're effectively removing that money to the economy. That's what I say to the Republican governors who are talking about curtailing these benefits early. You're basically, you know, putting a gun to your head and pulling the trigger. It makes no sense.

INSKEEP: In just a few seconds, is there a special problem for parents here and especially women who are struggling to get back into the labor force while probably still doing extra child care at this point?

INSKEEP: And that's not enough. OK, got to stop you there. Dan Alpert of Cornell. Transcript provided by NPR, Copyright NPR. 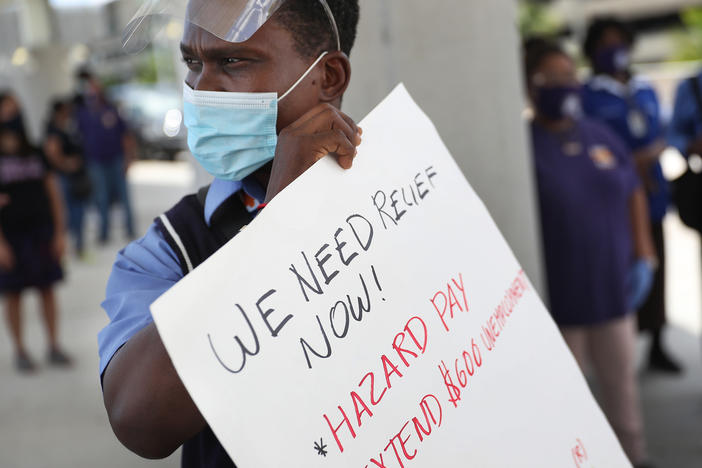 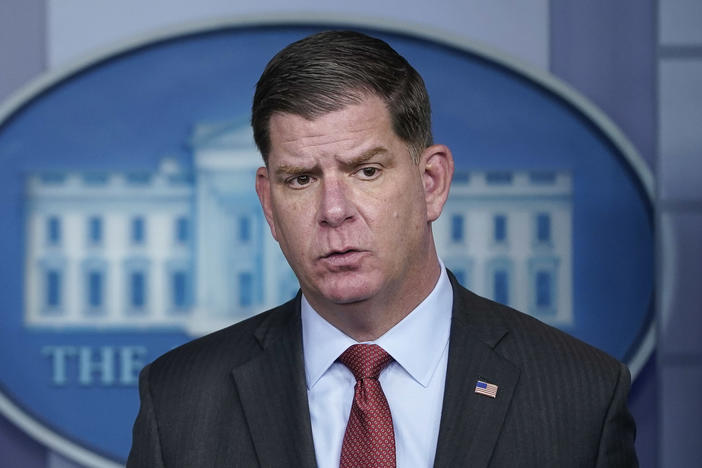 Getting Women Back To Work Is Key To A Strong Recovery, Labor Secretary Says

Millions of women have left the workforce during the pandemic as schools stopped in-person learning. Labor Secretary Marty Walsh says the recovery hinges on women returning to work.