In Both Fact And Fiction, The Truth Of Tulsa Is Hard To Stomach 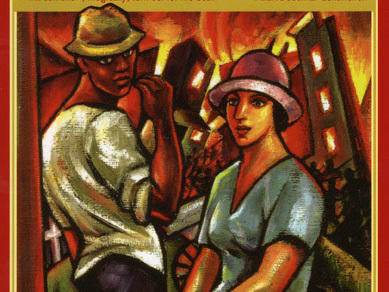 In the early 1900s, Greenwood — a Black neighborhood in Tulsa, Okla. — was a thriving, successful, independent town. But on May 31, 1921, a mob of white people stormed the town, killing an estimated 300 people, burning down homes and businesses, and leaving thousands homeless. There are competing theories as to what ultimately incited what came to be known as the Tulsa Race Massacre — but author Jewell Parker Rhodes says it was likely related to the perception that Black people "shouldn't be educated, shouldn't be uppity, shouldn't be, enjoying this kind of success."

Parker Rhodes had wanted to write about the Tulsa Race Massacre for years, but because the subject made some people so uncomfortable — including publishers — she had to wait for several years to finally publish her novel on the topic, Magic City. It's a fictionalized retelling of the events surrounding the massacre, and it's been reissued in recognition of the Tulsa Race Massacre's centennial observances.

So ahead of the 100 year anniversary of the tragic events in Greenwood, I spoke to Parker Rhodes about why the story still resonates, and how Tulsans are coping with the aftermath of a century-old trauma. This interview has been edited for clarity and length.

Tulsa in particular was anti-union, anti-Black, anti-Native American, anti-Communist. And just before the Greenwood massacre, there was an incident in which a young Jewish man was lynched and burned. So this was a truly lawless city where people who held power and money ruled.

One theory for why the massacre happened is that the city actually wanted to put a railroad through Greenwood. So they figured, "What's the best way? Give me an excuse so we can destroy your community."

Using infrastructure to debilitate Black communities has gone on through the twentieth and the twenty-first century so far.

The incident that allegedly started all this violence was a rumored assault of a white teenager by a Black teenager. Except the young woman in question, Sarah Page, did not press charges against Dick Rowland; she insisted there was no assault.

Right. She was a white woman who said, "No, you are not going to use my gender, my body as an excuse to assault a black man." And as far as I know, in terms of history, that was a rarity.

After rumors of an assault spread, Dick Rowland was taken into protective custody. A mob of white men descended upon the jail; they wanted to lynch him on the spot. But something stopped them. What?

Black men who knew what it was to defend civil rights and civil liberties, most of them veterans, came to the courthouse and said, "Oh, no, you have to give him due process." And apparently somebody asked a young Black man, 'what are you doing with that gun?' And the fellow responded, "Well, I'm going to use it if I have to." Somewhere in there a shot was fired — no one knows by whom — and boom! That started the violence and the rioting.

But we should point out that the rioting was one-sided, right? It was whites rampaging through Greenwood, looting, then burning Black families' homes.

Yes. With no consequences. Interestingly enough, I remember being in Oklahoma when Timothy McVeigh was sentenced for his white terrorism action, for bombing the Murrah Federal Building in 1995; 168 people died in Oklahoma City. [McVeigh was tried and executed in 2001.] And now I've lived through the January 6 attack on the Capitol, and it seems as though the Justice Department is really pursuing the white terrorists who were involved in that. But the terrorists who, 100 years ago, destroyed Greenwood have never, ever been brought to justice. They have never even been named. And it's so typical that, in terms of getting justice for African Americans and other oppressed groups, that your story can go untold, ignored, not brought to justice until it affects more directly, you know, the master community.

Part of the reason Tulsa had so much racial tension was because Oklahoma, and Tulsa in particular, had a lot of Ku Klux Klan activity. I've been told that the Klan had been on the wane, but when Black World War l veterans returned home with firearms skills and a determination to press for their full citizenship, suddenly Klan membership quickly increased?

The only time I've seen the Ku Klux Klan was in Tulsa, Oklahoma, when I was doing research for Magic City. This was about 1984. I was so appalled!

My young daughter was with me. I did point out to her that there were men, women, white and of color, police officers who were protecting the right of assembly of the KKK. And that that was our country, you know, showing its commitment to the First Amendment. But we still need to show our commitment to uncovering the legacy of all the things that have happened to people.

You've mentioned that initially, this book had a hard time being placed with a publisher. And that when it was published in 1997, a glowing review that was slated for a Tulsa paper suddenly...disappeared?

That review never, ever was published. Later, when I met the editor of the Tulsa World, she said to me, "Oh, it's not personal." And I thought it was very personal, because we had had great evidence that Tulsa was still not ready to reckon with its racial history. A dear friend of mine who actually did a book review in the Arizona newspapers, she confessed to me after about a year that she had gotten hate mail. People were threatening her simply because she wrote a review about a fictional retelling of an actual incident that happened in Tulsa.

Some white people just wanted to forget or ignore that the massacre in Greenwood had ever happened. But we've also heard from some Black people who say they grew up in Greenwood and had never been told that story. Why? 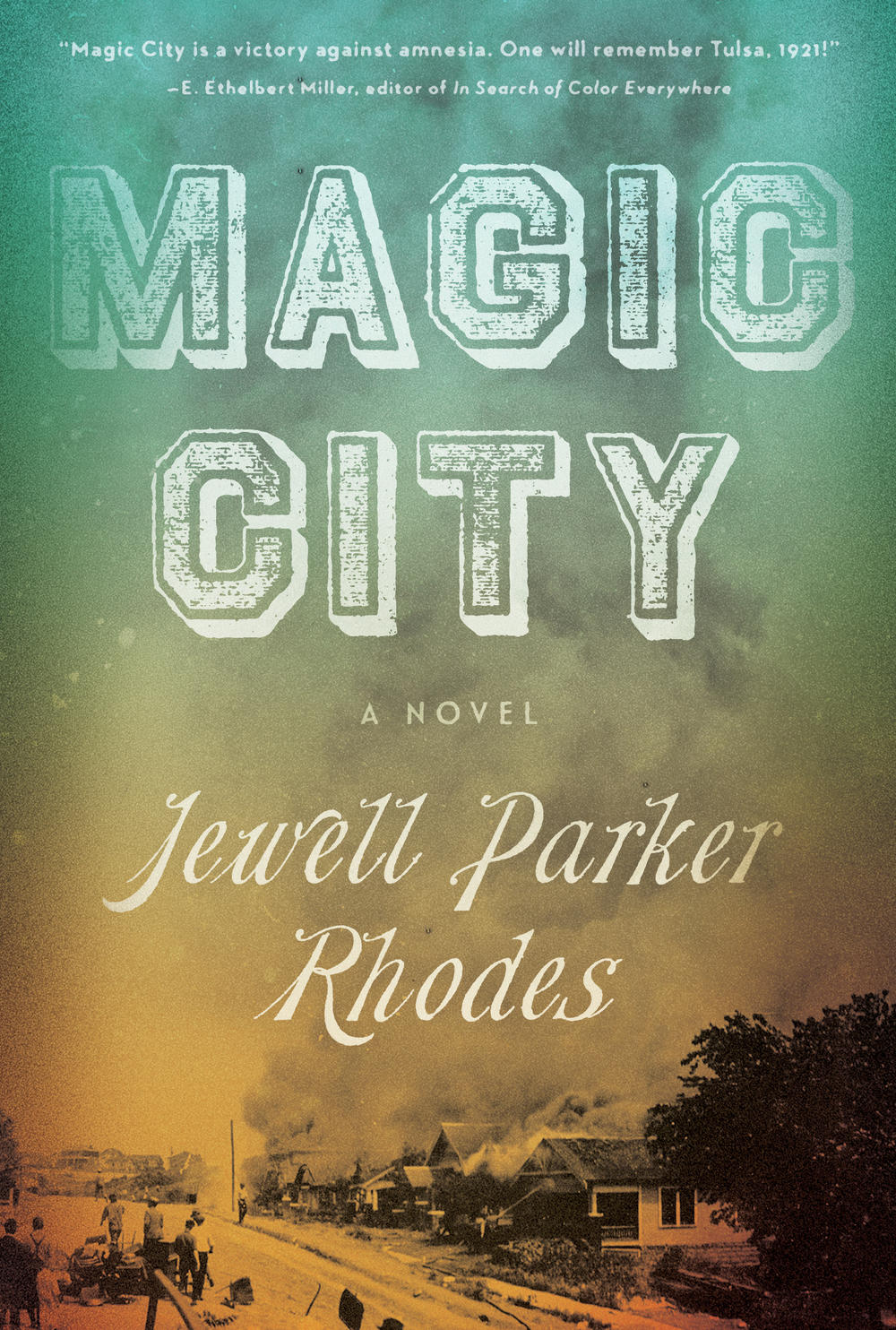 I think Greenwood is just now coming out of that sense of trauma. If you can imagine in the 1920s how vulnerable the community felt — and not only did they have the massacre to contend with, but afterwards, the White House put them in a tent city and made them have I.D. cards in order to go back and forth to work. They had an internment camp. So some people did not tell their story. Some told it in whispers. And some tried to bury and forget. All are natural responses to trauma.

We can't judge the trauma that people felt in the 1920s. Do you know what I mean? So that's why you had a lot of Black kids being raised in Greenwood who didn't know about the Tulsa massacre. They weren't told. It was harder to speak truth to power in the 1920s. Some did it, but we can't begin to guess at the trauma and the fear.

Does this centennial help or hurt people still coping with the aftermath of Greenwood, generations later?

If it could be fixed with one memorial, one celebration, we would have all of our problems fixed so easily. I think it's going to take a lot more hard work. But I think now that the voices have been raised, that art is being created, we will at least be able to say that Greenwood will never, ever be forgotten. That it is a story that has had its time to be felt and heard, and it will continue to resonate. 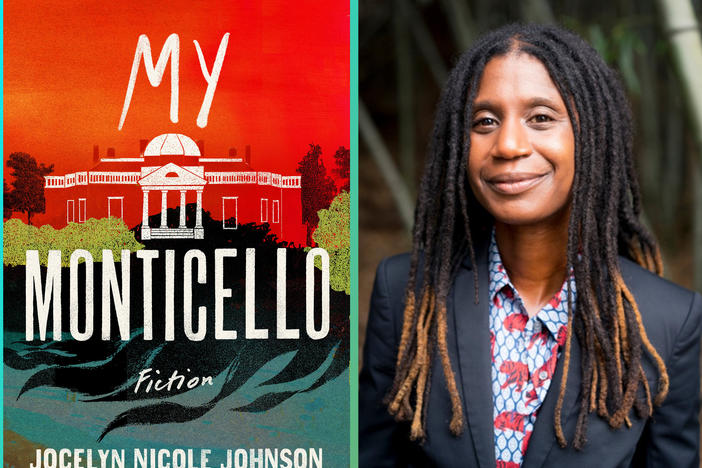 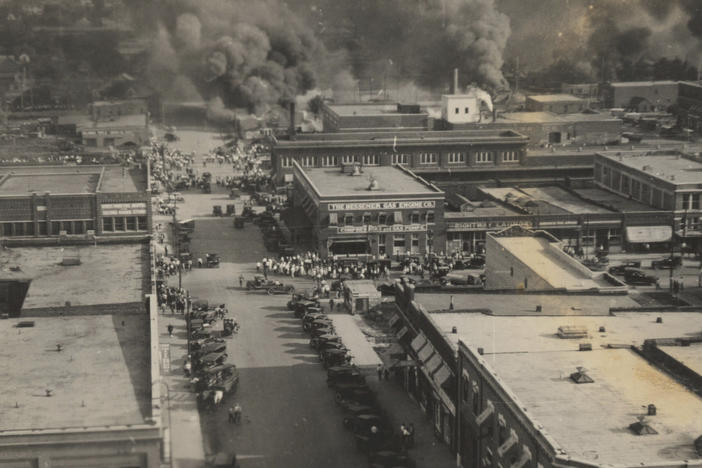 Here's the books and articles about the 1921 Tulsa massacre that we recommend for a deeper dive into the events from the day. 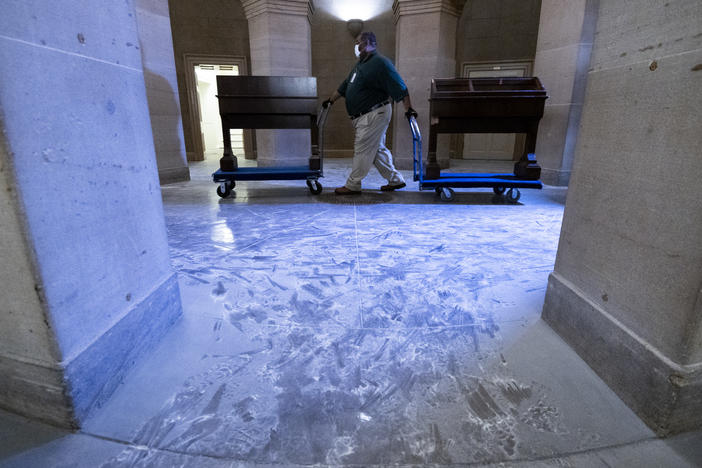 The 'Racial Caste System' At The U.S. Capitol

After the Capitol was cleared of insurrectionists on January 6, there was work to be done — and it wasn't lost on many that cleaning up the mess would fall largely to Black and Brown people.