Portrait Of A Parent With Alzheimer's

Since 2016, journalist Yvonne Latty has been documenting her mother's journey with Alzheimer's. As part of a collaboration with Latino USA and Black Public Media, she brings us this intimate portrait.

Alzheimer's, like so many other diseases, disproportionately affects Black and brown communities. African Americans are twice as likely to be diagnosed with Alzheimer's as white Americans are; Latinos - 1 1/2 times as likely. For journalist Yvonne Latty, those numbers became personal when her mother was diagnosed with Alzheimer's. Latty has been documenting her mother's illness since the start, continuing as best as possible through the coronavirus pandemic.

Y LATTY: So this is my life. Every week, I have a Skype call into my mom's nursing home in the Bronx.

Each call starts more or less the same. I reintroduce myself to my mother. I remind her that this is her daughter Yvonne speaking.

How are you feeling?

Y LATTY: Alzheimer's disease has been hell, and COVID-19 has made it worse. The last time I saw her in person was in March. She knew who I was then. It was a week before the coronavirus shutdown in New York City where she lives.

Y LATTY: The Skype calls are hard. She can barely speak a few words, and they rarely make sense. I was told to use music to reach her.

She loves Latin music. She loved to dance. And so I try.

She's 87, and it's been four years now since she was diagnosed, four years of the lonely journey, which in the end I walk alone because my mom has no idea what day it is, what year it is, how old she is or where she is.

You don't know who I am? You promised me you were never going to forget me, and look at you now forgetting me. Thanks a lot.

Y LATTY: My mom faced dirt-poor poverty in the Dominican Republic where she was born. She joined a wave of immigration to the U.S. at 19, and she surpassed every challenge thrown her way. I'm not ashamed to say am desperate to connect with her to understand her story and make it mine and tell the world Ramona Latty, my mom, matters.

Y LATTY: That was just four years ago.

Y LATTY: This was right after her diagnosis when we could still talk to each other. Alzheimer's is a brain disease. It slowly destroys your memories, your ability to think, speak, walk, talk. It's a wicked form of dementia, and it will slowly kill you. The type of Alzheimer's my mom has is not genetic, but my odds of getting the disease are slightly higher because she has it. But that has been the challenge of the disease, understanding it and holding on to Ramona Latty. I find myself thinking about where she came from, who she was, her story pre-Alzheimer's.

UNIDENTIFIED PERSON: Immigration has brought in many people from the Caribbean area. Most of the immigrants went into the factories and found their homes in the tenements of America's growing cities.

Y LATTY: In 1950, she got a chance to come to New York City. She was 19, and she got a job in a pocketbook factory and went to beauty school.

Y LATTY: It's such a New York City story. She met Albert, my dad, in a beauty parlor in Spanish Harlem run by a Cuban woman who was married to a Jamaican man and as a result had Jamaican customers, which included my grandmother. My dad went to pick her up one day, saw my mom in the beauty parlor, and it was love at first sight, even though she spoke no English and he spoke no Spanish.

Y LATTY: Hello. Hi, Aunt Grace. How are you?

So I wanted to start a few years into my mom's journey in New York City. And to do that, I reached out to Grace Lawrence, or Aunt Grace, who has been very close to my mom for over 60 years.

When you first met my mother, what did you think about her? Like...

LAWRENCE: Your mother loved to dance. She was so pretty and vivacious.

Y LATTY: And that's how I remember her, dancing with us in the kitchen to disco, salsa, merengue. Everything was hips, hips, hips, didn't matter the music.

Y LATTY: In mid-April, about a month after the COVID lockdown started in New York, I recruited Nola, my oldest daughter, to help me dig through some old photos I keep in a big plastic bin in our home in Philadelphia.

Nola, this is my mom's wedding picture.

NOLA: I've seen this one. It's really pretty. Wait, wait, what's this one?

Y LATTY: Nola pulls out a black-and-white photo booth image of my mom taken in the early 1950s.

That's when she first came to this country.

NOLA: She looks so good in this picture.

Y LATTY: She is looking away from the camera in a playful way. She's wearing hoop earrings and dark lipstick. The photo seems timeless.

NOLA: She's, like, working it. Can I have this?

Y LATTY: When people tell me I look like my mom, I don't believe it.

Oh, my God. What a compliment 'cause she looks so pretty (laughter).

We are different colors. She's light-skinned, and I am dark-skinned. And when I was growing up, there was this idea that the lighter skinned you are, the prettier. My mom indirectly reinforced the negativity by constantly commenting on my hair and forcing me into painful smaller shoes because she didn't want me to have big feet.

My hair didn't really go natural until you were born. And when you were born and she saw you, one of the first things she said to me was, how old does she have to be before we can straighten her hair?

The next photo we pull out of the bin is of my dad, my mom and my sister.

And this is a photo of their first Christmas with my sister Margie.

NOLA: Aw. Margie's such a smush.

Y LATTY: Mommy, do you remember? It was Margie's birthday last week. Mommy?

My big sister Margie was killed in a car accident in 1988 when she was 27. Margie and my mom were real close. She spent endless hours in the kitchen cooking with her, talking to her. They look so much alike and seemed to have so much in common. I felt close to Margie, too. She was my playmate, my friend and always looked out for me.

Y LATTY: A few months after Margie died, I booked my mom and me a flight to Paris. It was a magical trip. Despite her pain, my mom was alive and living her life to the fullest. And I learned so much about strength just watching her survive the unthinkable. And for the first time in my life, I saw what we had in common.

Y LATTY: Mommy, I was thinking about our trip. Remember the trip we took the Dominican Republic?

Twenty-four years later, I took another life-changing trip with my mom. It was 2012, her 80th birthday. And I decided to take her and my daughters to the Dominican Republic. I wanted them to experience where my mother had come from.

NOLA: Yeah, that was fun. There was a trip.

Y LATTY: For me, that trip was the first red flag that something was seriously wrong.

NOLA: We were just kind of expecting that abuelita would be, like, our resident Spanish speaker. Like, we'd tell her what to say in English, and she'd say it in Spanish. And this was like - this still makes me laugh. I know it's not funny, but it's kind of funny.

Y LATTY: I was in shock. I had no idea what my mother was doing.

Y LATTY: A few months after the trip to the Dominican Republic, we were joined by Aunt Grace and her husband Paul for Thanksgiving. Aunt Grace had noticed my mom had seemed off lately and confronted us both. My mother said everything was fine, and I chose to believe my mom.

Y LATTY: In December of 2015, I decided to go with my mom to see her doctor. He suggested cognitive testing and gave us a referral. Three months later, after a series of tests, we ended up in a neurologist packed Bronx waiting room filled with Black and brown people. When it was finally our turn, we were told my mom had Alzheimer's disease. The doctor wrote down a few URLs and told me to Google it. A life-altering, life-ending diagnosis was given to her in the same manner I was told I was nearsighted. I grabbed my mother's hand as she stared blankly at the doctor. It was clear she was just a number to him.

Y LATTY: Six months after getting her original diagnosis, I scramble to get her into a clinical trial. The time demands were horrific, and in the end, she got the placebo. I was wrecked. Things kept spiraling out of control until she ended up in the nursing home, the last thing I wanted to happen. And now my mom, who worked all her life, learned English, raised two daughters and gave me the tools to succeed, her life has deteriorated to this.

Y LATTY: All I have at this point are memories to get me through, like the last time she sang me happy birthday last year before she truly lost the ability to speak.

But she doesn't remember me anymore. So in the end, COVID-19 did take my mom, not physically but it took what was left of her essence. I love her, and I choose to hold her memories until I, too, am just a memory.

CHANG: Journalist Yvonne Latty talking about her mother, Ramona Latty of the Bronx. This piece was produced in collaboration with Latino USA and Black Public Media. You can hear a longer version of this story on Latino USA's podcast. Transcript provided by NPR, Copyright NPR. 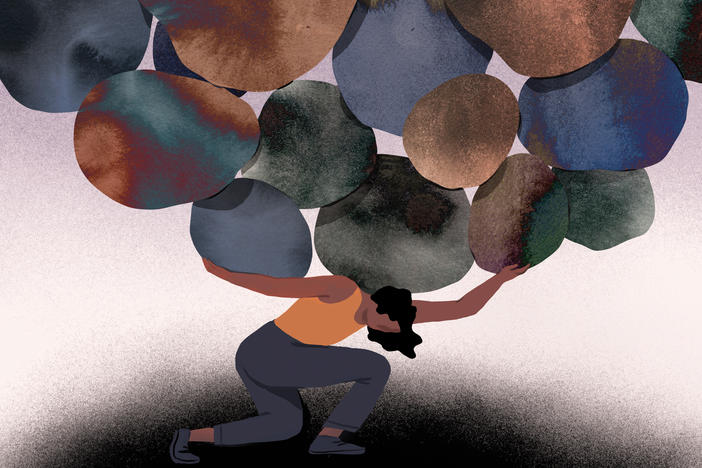 How The Pandemic Is Widening The Racial Wealth Gap

The coronavirus has affected most Americans, but NPR's latest poll shows Black, Latino and Native American households are hardest hit by the financial impact of the crisis. 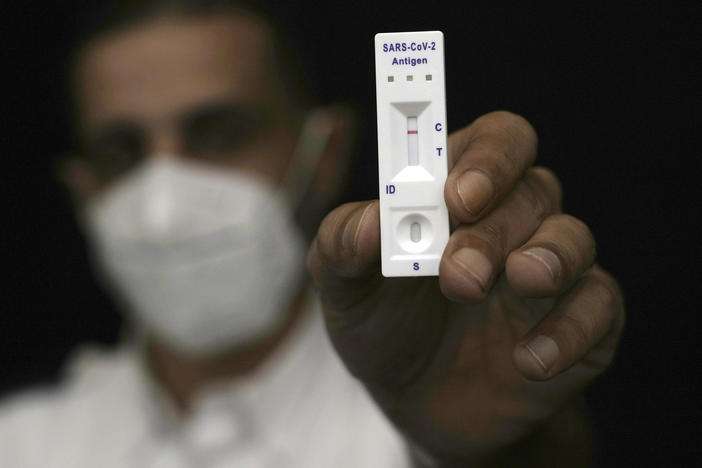 Is it time for a reality check on rapid COVID tests?

At-home rapid tests have become a staple of COVID-19 precautions, but some experts worry that people are relying too much on these tests and that's creating a false sense of security. 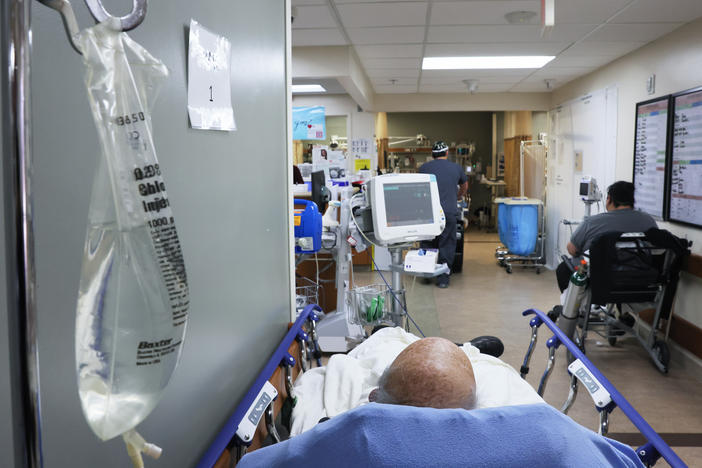 RSV and the flu appear to be receding in the U.S., but COVID is on the rise, new data suggests, driven by holiday gatherings and an even more transmissible omicron subvariant that has become dominant.