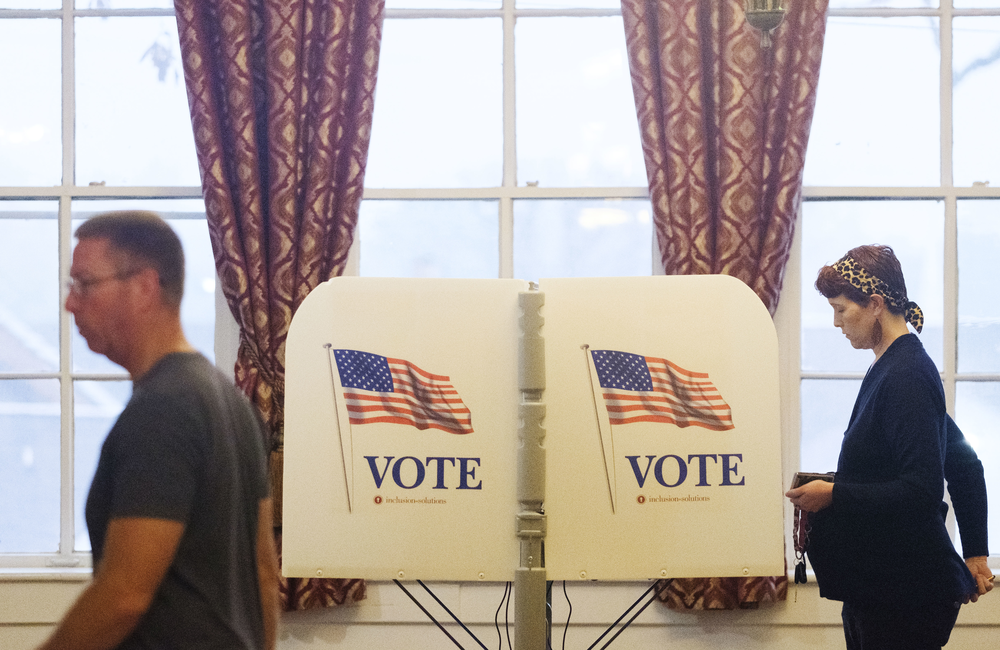 The Associated Press has called the race for Senator Raphael Warnock, who has defeated challenger Herschel Walker in Georgia's U.S. Senate runoff election:

About 1.9 million runoff votes were cast by mail and during early voting, while the state was on track for a robust Election Day, with state officials estimating an additional 1.4 million votes cast — slightly more than in the November midterm and the 2020 election.

Although votes are still coming in, the crowd is in a great mood at Warnock's campaign party as filmmaker and Morehouse College alum Spike Lee takes the stage. 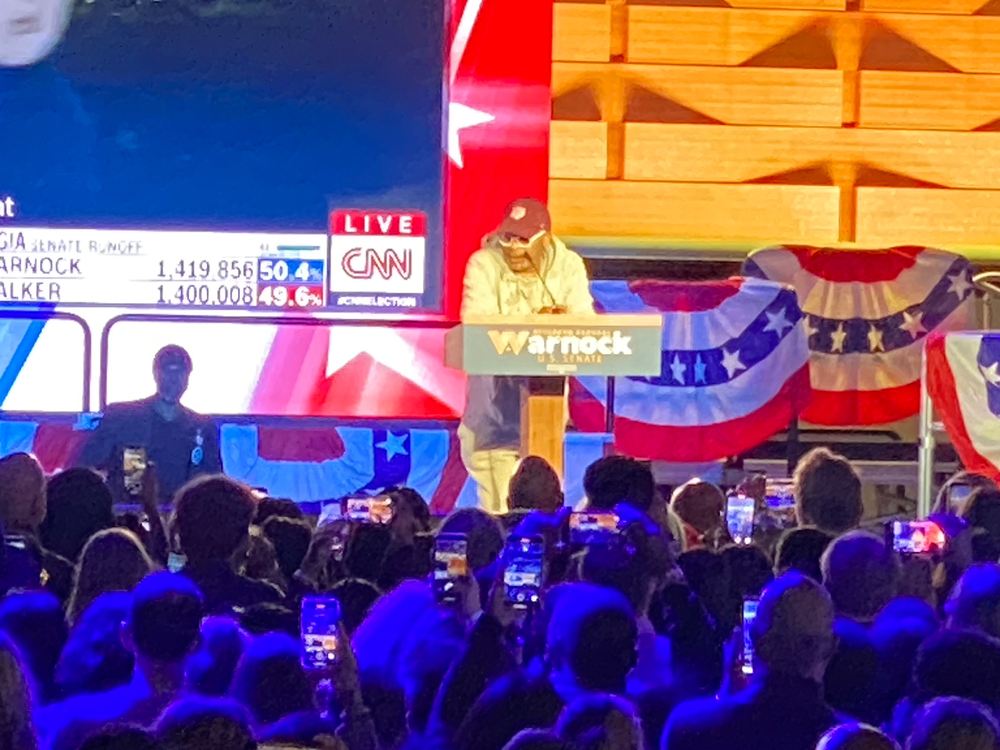 Sen. Raphael Warnock's supporters are beginning to fill up the ballroom at campaign headquarters in Atlanta. 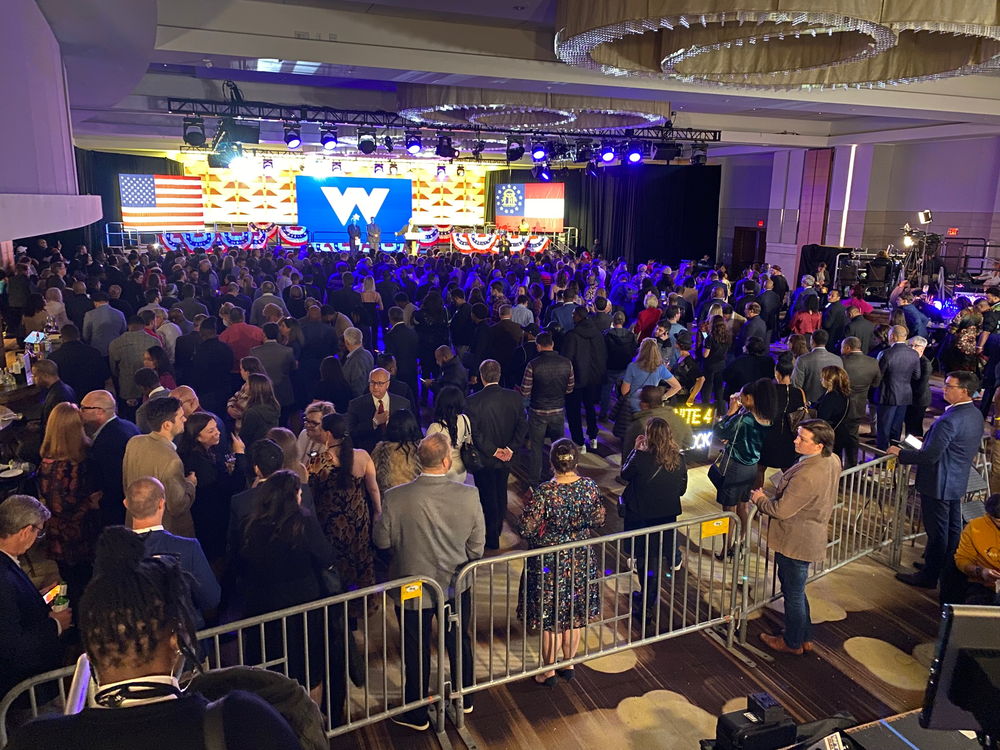 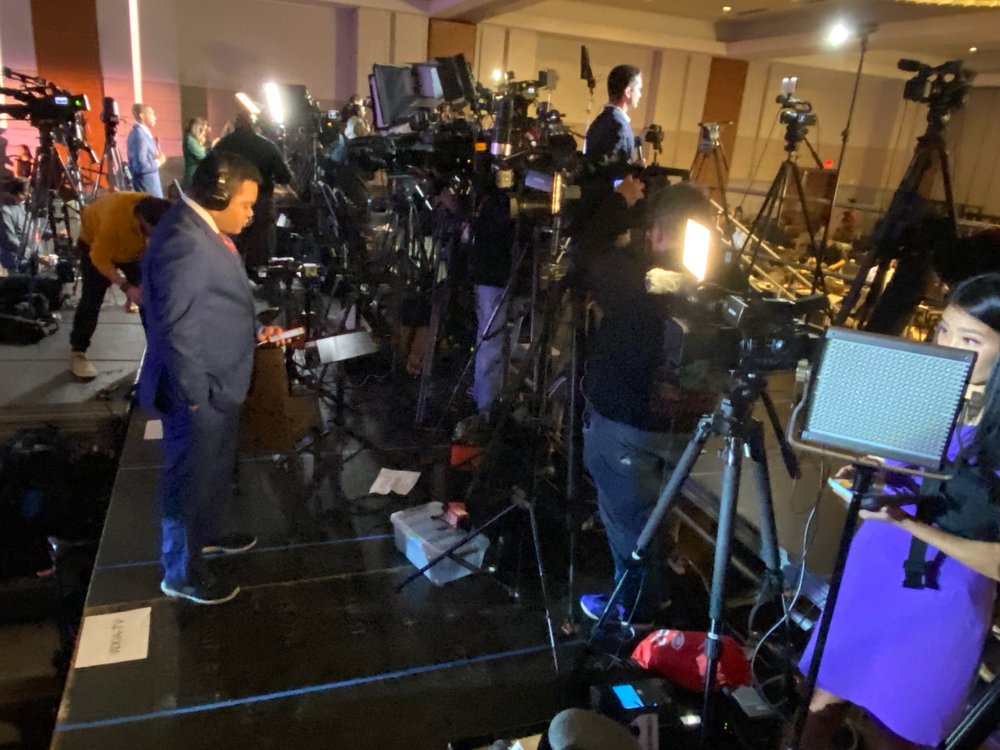 Members of the press at Raphael Warnock's campaign event on Dec. 6, 2022 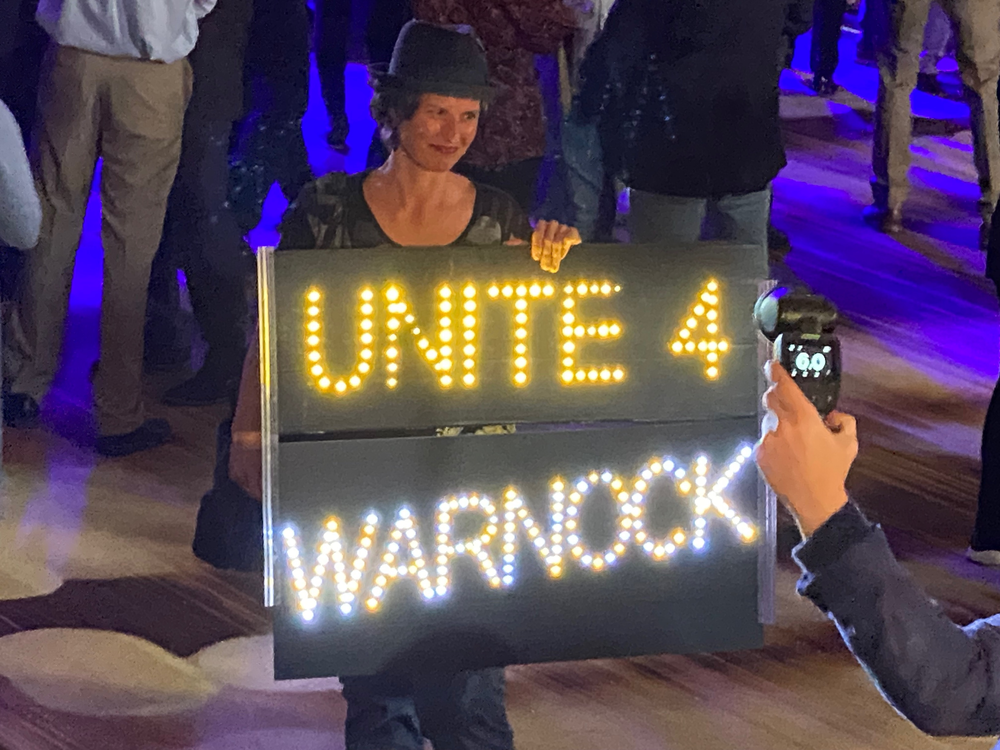 A supporter displays a sign at Raphael Warnock's campaign event on Dec. 6, 2022 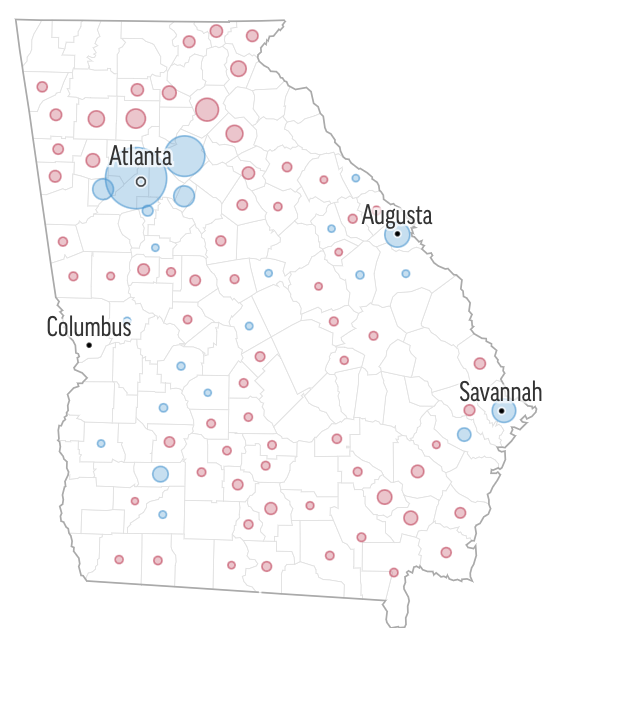 Polls in Georgia are closing and counties will begin reporting results as they come in.

Secretary of State Brad Raffensperger gives an update on voting across the state in the Senate runoff election.

Georgia voters have only a few hours left — until 7p.m. — to cast their vote in the runoff election between incumbent U.S. Sen. Democrat Raphael Warnock and his challenger, Republican Herschel Walker.

For many voters in Macon, there was one issue which brought them to the polls. That was true for Ron Hale.

"I guess I would say the abortion thing," Hale said. "Me being a male, got a 11-year-old little girl. Yeah. That's kind of important to me. Just that she's got the right to choose. It's between her, her husband-to-be, the doctor and not between anybody else."

Adrienne Boyce of Savannah voted for Warnock. She chose not to vote early, saying "there's something exciting about election day." It was also more convenient for her, as Boyce said that she lives just a few doors down from her assigned polling place. 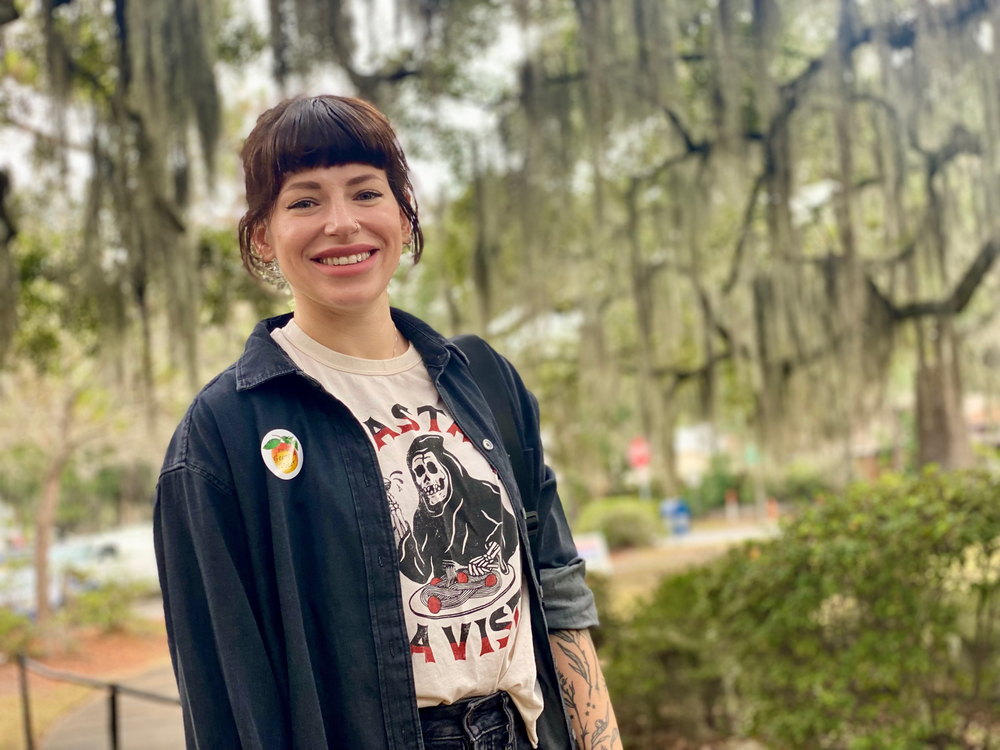 Adrienne Boyce of Savannah voted for Raphael Warnock on Dec. 6, 2022

Voters in Fulton County showed up to cast their ballots in the runoff election. When it comes to choosing a candidate, Buckhead resident Marshall Roberts said he thinks about who will benefit his finances: “The price of groceries. And the price of gas. Inflation. I’m trying to put more money in my pocket.”

12:30 p.m. from the United States Department of Justice:

Civil Rights Division personnel also will be available to receive complaints from the public related to possible violations of federal voting rights laws by a complaint form on the department’s website https://civilrights.justice.gov/ or by telephone toll-free at 800-253-3931.

Visit https://www.justice.gov/crt/voting-section for more information about the Voting Rights Act and other federal voting rights laws.

More information about the federal civil rights laws is available at the Civil Rights Division’s website at https://justice.gov/crt.

Sandra and John Jackson cast their ballots in Savannah for Warnock. Sandra cited Warnock's support for abortion rights: "I'm 66. I'm not having any babies. But I have grandbabies. And to think that they couldn't do what they want to with their own body — that really bothers me."

The people of Georgia are voting today to decide who will serve them in the US Senate: Republican Herschel Walker or Democrat Raphael Warnock. For Anne Marie Wimberley voting in a heavily Republican Macon precinct, the motivation to vote comes down to a single word: Roe.

"I have children. And I want my daughters to have the same kind of rights that I had growing up, so I find that's important," said Wimberley. "Yeah. Sometimes when I walk in here, I'm like, I wonder how many of these people have the same views as I do? Cause probably not many.

Voter Anne Marie Wimberley expresses her views on women's rights after voting in Macon on Dec. 6, 2022.

Gabriel Sterling from the Secretary of State's office gives the first update of the day on the U.S. Senate runoff election day voting.

In a press conference, Gabriel Sterling from the Georgia Secretary of State's office said more than 400,000 ballots had been cast so far this morning and that he was confident that over a million votes will be cast today but he's not sure if numbers will reach overall 2021 runoff record. 172,572 absentee ballots have been accepted and just over 1,880,000 early votes were cast last week.

Currently nine polling locations had wait times over 20 minutes across the state. 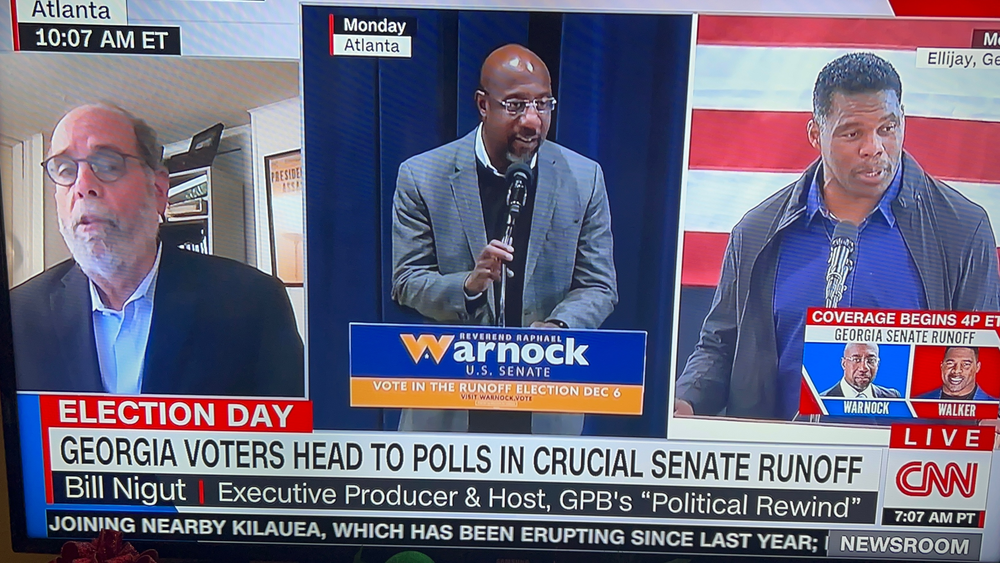 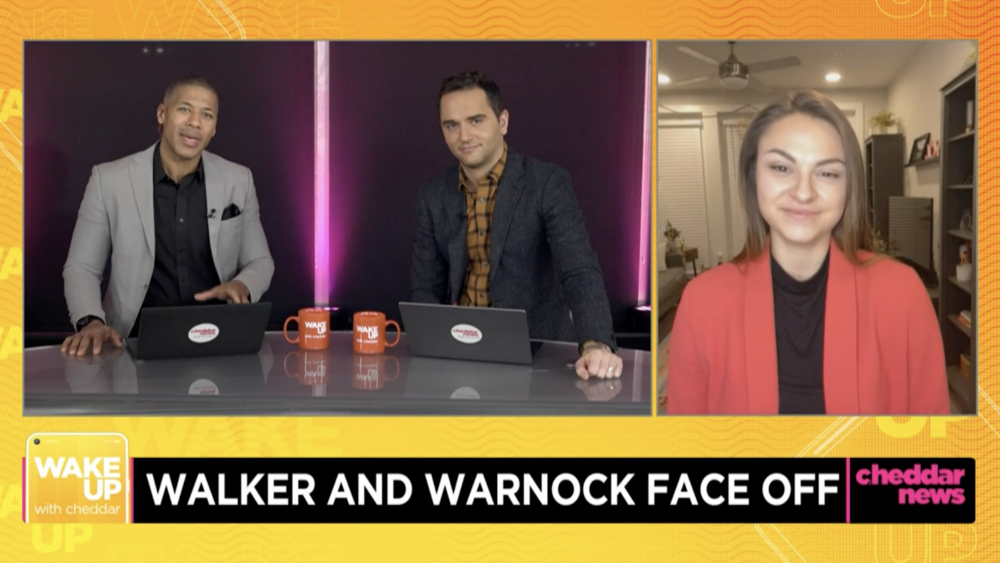 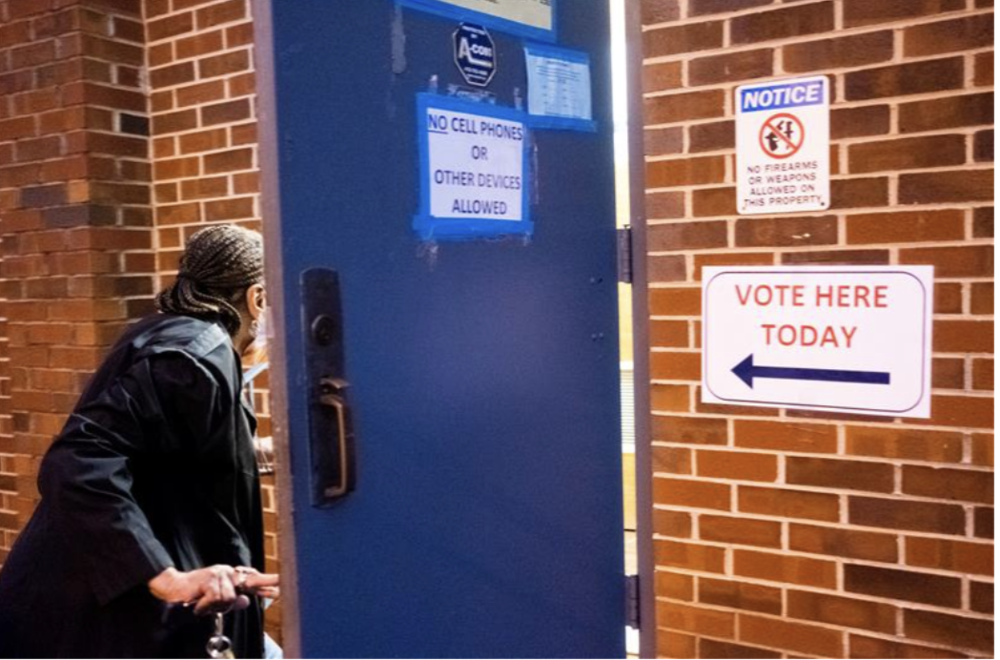 It was still dark outside when the first voters entered Glorious Hope Baptist Church in Macon on Dec. 6, 2022.

The polls are open for voting in Georgia's Senate runoff. Many, like school principal Terrance Phillips, who was the first to cast his vote at Macon's Glorious Hope Baptist Church this morning,  were lined up before polls were opened.

"I think we should have choices," Phillips said. "And it appears that some candidates are trying to take those choices away. Think about family members. Just think about life in general. Things are happening everyday, and we want to be able to have the right to make good choices if we need to."

Terrance Phillips was the first to cast his vote at Macon's Glorious Hope Baptist Church on Dec. 6, 2022.

"The economy, inflation, everything's at stake," another Hope Baptist Church voter, Clyde Shelton, said. "Several years ago I was doing great. Had more disposable income than I knew what to do with. And now I'm lucky to make it paycheck to paycheck. That's what's in it for me. I'm wanting to get back to the way things were. The right way."

Clyde Shelton was among the first to cast a vote at Macon's Glorious Hope Baptist Church.

Polls opened at 7 a.m. today and Georgia voters are casting their ballots to choose who will be their U.S. senator for the next six years.

GPB.org/elections is your resource for election results and information.

The Georgia Secretary of State's office is holding press conferences today. GPB is streaming them live as they happen (times vary).

GPB News reporters will update this post throughout the day with photos and voter voices from the field. 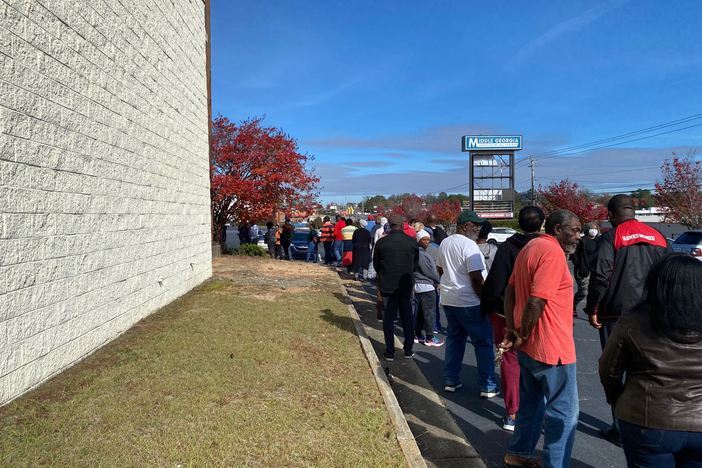