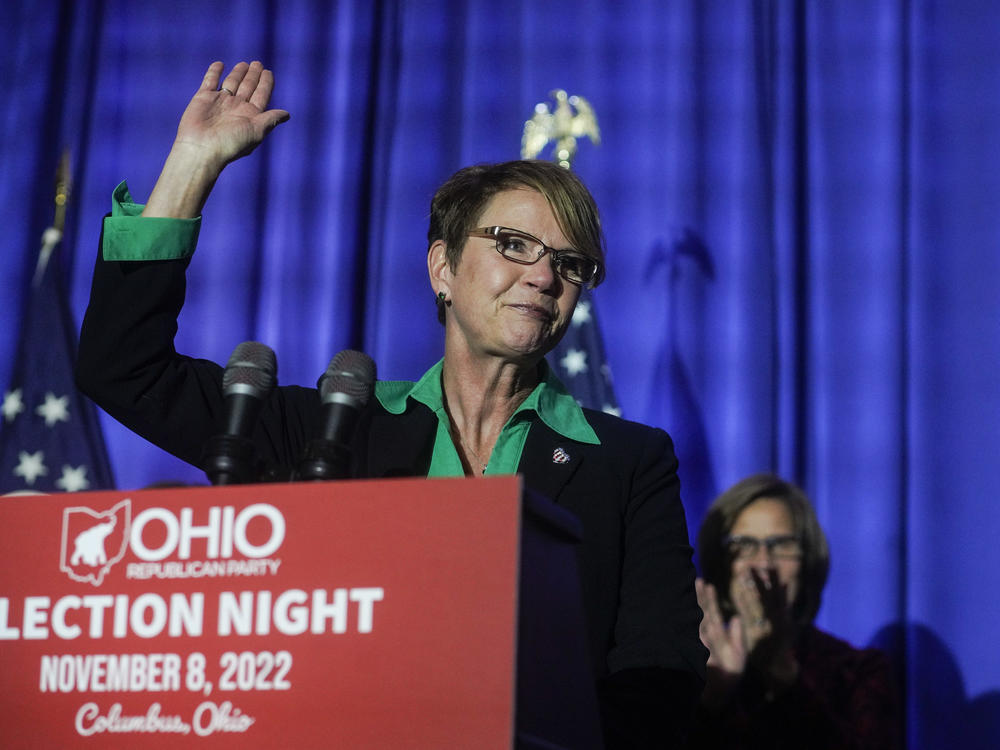 Republican state Supreme Court Justice Sharon Kennedy speaks to supporters at an election watch party at the Renaissance Hotel on Nov. 8, in Columbus, Ohio. Kennedy was reelected to the court, this time as its chief justice. / Getty Images

In the next year, state courts around the country will weigh in on abortion rights, redistricting and voting access.

Unlike U.S. Supreme Court justices, who are appointed, many state supreme court justices just went through an election. The midterms resulted in few shakeups, but GOP wins in Ohio and North Carolina Supreme Court tee up changes to the legal landscape in those states.

Looking ahead, here's how those wins will influence state policy decisions, as well as the balance of power in Washington.

Ohio traded a swing chief justice for a conservative one

This is the bench that will likely hear a challenge to Ohio's ban on abortion after six weeks, as well as litigation around the state's voting maps.

While the GOP will retain its majority, who's presiding will change.

On an already conservative panel, "Justice Kennedy was perhaps the most conservative," says Jonathan Entin, a law professor at Case Western Reserve University.

Kennedy, a former police officer and administrative judge, has been on the bench since 2012. In 2017, she spoke at an event held by an anti-abortion rights group at the same time the panel was hearing a case about whether or not to close an abortion clinic.

"It is morning again at the Ohio Supreme Court," Kennedy told supporters assembled at the GOP Election Party in Columbus.

When it comes to redistricting, Ohioans approved two constitutional amendments, in 2015 and 2018, to update the process of carving up districts so that it would be more bipartisan and less likely to favor one political party over another.

However, Republican officials continued to control the map-drawing process. As a result, O'Connor, the outgoing chief justice, sided with Democrats and tossed out proposed maps for unfairly advantaging Republicans – five times.

With the new bench, GOP lawmakers may get those maps after all.

Power over redistricting is just one example of the influence state supreme courts wield. These maps not only determine which party controls the state legislature, but also how many Democrats and Republicans the states are likely to send to Congress.

With slim margins in the U.S. House of Representatives, "these courts have significant power, especially at this moment, to determine how our federal government is functioning, not just the state government," says Douglas Keith, counsel with the Brennan Center for Justice. Between Ohio and North Carolina, 29 congressional districts are in play. The Brennan Center is representing some of the plaintiffs in Ohio's redistricting litigation.

At the same time, races to control these courts have attracted greater spending, and in some cases, have become more explicitly partisan.

For example, this midterm Ohio voters saw a "D" or "R" next to a justice candidate's name on the ballot, thanks to a 2021 law passed by the GOP-led legislature.

Funding has also swelled. State judicial races used to be "pretty sleepy," says Keith, attracting donations primarily from interest groups within the state. In recent years, there has been a growth in campaign funding from national political groups and PACs.

The Republican State Leadership Committee credits the "clean sweep" in Ohio and North Carolina to the group's judicial campaign spending effort, called the Judicial Fairness Initiative. The Initiative's goal is to "ensure that the redistricting fights ahead in those states are ruled on by strong conservatives," said an RSLC spokesperson in a statement.

Democrats, Republicans, and PACs spent big in Illinois, where Democrats managed to secure open seats and maintain their majority on the court.

Accounting isn't final for the 2022 races, but some states have already broken their previous records this cycle, says Keith. During the 2020 election, state supreme court contests drew $97 million, making that the most expensive cycle to date, according to a Brennan Center report. 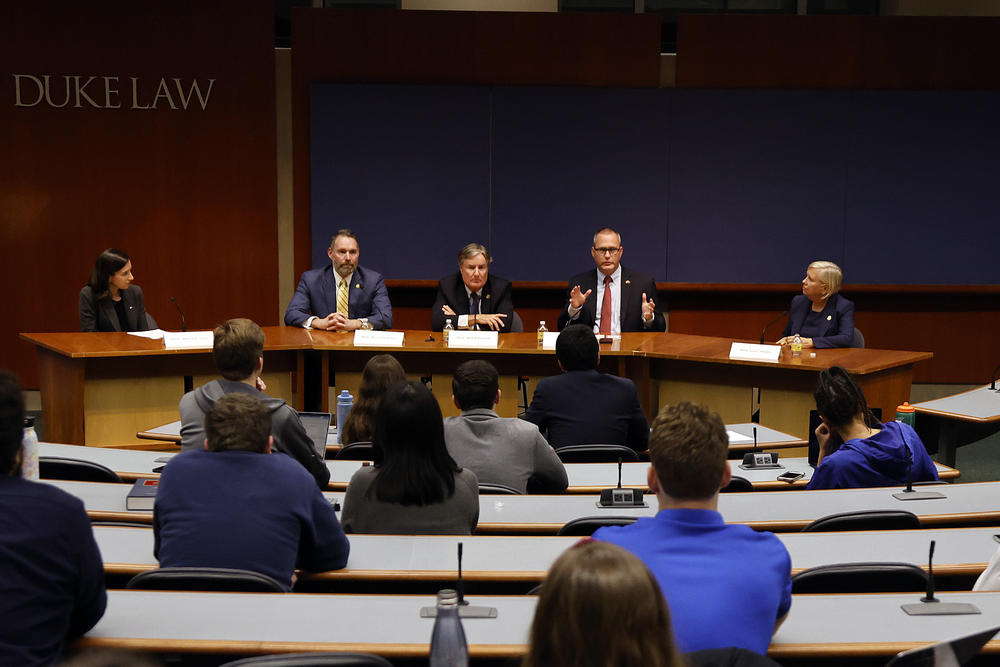 North Carolina Supreme Court candidates speak during a panel discussion ahead of the election at Duke University Law School in Durham, N.C., on Oct. 26. Republicans flipped control of the state Supreme Court into their favor. / AP

North Carolina saw the biggest state supreme court flip of the midterms, switching from a 4-3 Democratic majority, to a 5-2 Republican one.

Once they are seated, this new bench could hear cases on the state's voting district maps, as well as education funding and abortion rights.

The vast majority of these decisions have no partisan angle, says former North Carolina state Supreme Court Justice Bob Edmunds, a Republican. In recent years, though, shifts outside and within the court have made it more overtly politicized.

"This year, the [North Carolina] justices in some of their writings were accusing each other of making decisions on the basis of political affiliation," says Edmunds, adding that is "not usual."

A fight over partisan gerrymandering in the state is ongoing. North Carolina must redraw its congressional map before 2024. Edmunds is a special master, or an outside expert called on by the court, in redistricting matters. But beyond that, the justices could significantly shake up the state's voting requirements, he says.

North Carolina has several cases related to voting access winding their way through state and federal courts, such as N.C. NAACP v. Moore.

Edmunds says that changing when, how and where people vote, "hits home in a way you wouldn't necessarily expect, because it's so fundamental to how we perceive ourselves as American voters."

Andy Chow, of the Ohio Statehouse News Bureau, contributed to this story. 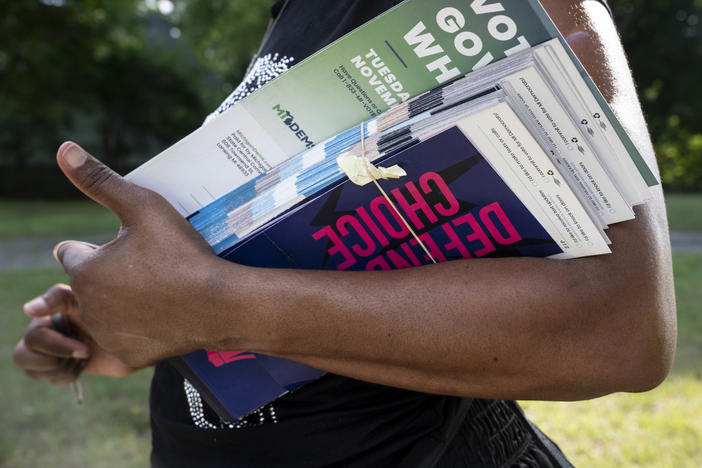 Michigan's Board of Canvassers rejected an abortion rights initiative on Wednesday after its Republican board members voted against putting the proposed constitutional amendment on November's ballot. 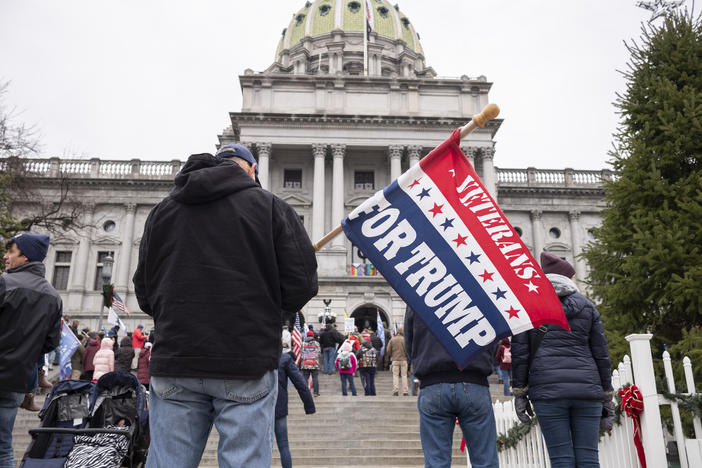 More than 6,000 state legislative seats are up for election this year. Republicans and Democrats are spending tens of millions in a battle to shift the balance of power in these chambers.