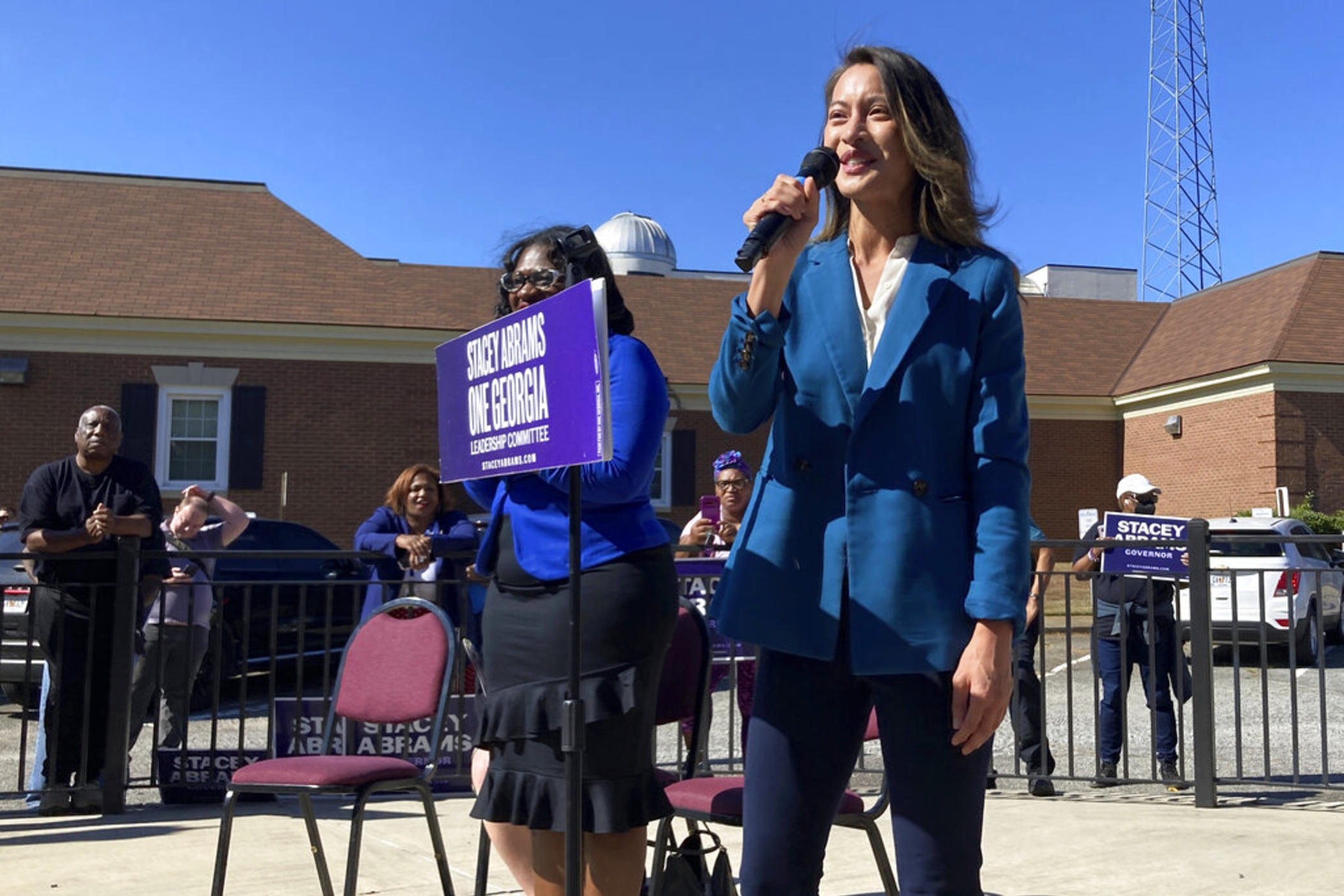 The Democrat running to be Georgia's top elections official says a closer look at incumbent Republican Brad Raffensperger's record will reveal he's no hero for refusing to do the bidding of former President Donald Trump.

"There seems to be this idea that he is a moderate Republican, and that is not true at all," Bee Nguyen, a state House member, said after a speech last week in the central Georgia town of Milledgeville.

While other Republican nominees for secretary of state embrace false claims that Democrats stole the 2020 presidential election, Raffensperger stands by his refusal to bend to pressure from Trump to "find" enough votes to give him a win in Georgia. A recording of the phone call he took from Trump is now evidence in a Georgia criminal investigation.

Those actions have given Raffensperger an appeal that's making it harder for Nguyen. She's one of a slate of strong Democratic downballot candidates running in Georgia, and has raised an unusually large $3.2 million to run for a sometimes-obscure office. That's more than the $3 million Raffensperger has raised, including $850,000 in loans to himself.

But Nguyen faults Raffensperger for endorsing Georgia's new voting law, which has narrowed the opportunity to cast mail ballots, banned giving food or water to waiting voters, curtailed ballot drop boxes and reduced opportunities for voters to cast a provisional ballot if they show up at the wrong place on Election Day.

Nguyen also reminds voters that as a state lawmaker, Raffensperger held a no-exceptions opposition to abortion.

"Georgia voters need to understand his record, which is out of touch with the majority of Georgians, from the personhood bill that he introduced, which would have eliminated even basic forms of birth control, to his stances on voting," Nguyen said. "We deserve better than somebody who believes that the office's duty is just to count the vote."

Nguyen needs to sway independents and even some Democrats who may vote for Raffensperger. After being left for dead as Trump heaped scorn on him, Raffensperger proved himself quite politically alive in May's Republican primary. He defeated challengers including Trump-backed U.S. Rep. Jody Hice, who objected to Georgia's electoral votes being counted for President Joe Biden. Thousands who previously voted in Democratic primaries cast ballots in the GOP contest that day, possibly providing the votes necessary for Raffensperger to avoid a runoff.

No one would mistake Raffensperger, an engineer who grew wealthy after founding a concrete engineering company, for a dynamic speaker. His campaign consists mostly of interviews and talks to civic clubs. He has positioned himself above the fray, writing a book called "Integrity Counts" about the 2020 elections.

Even with Raffensperger's primary victory, claims of election fraud haven't been banished from Georgia's secretary of state race — Libertarian Ted Metz is aiming for votes by claiming there are "still unresolved issues in the 2020 election" and says the outcome is "not credible."

With women's access to reproductive health care now in play as a major driver of voting nationwide, Nguyen says Raffensperger's opposition to abortion could become an issue if nurses get in legal trouble for aiding abortions that are now mostly banned in Georgia. That's because the secretary of state's office helps administer licensing for the Georgia Board of Nursing.

"We will keep fighting to protect our basic freedoms, including the freedom to vote and the freedom to choose," Nguyen told the crowd in Milledgeville.

"We don't select the boards, the boards run their shop," Raffensperger said. "They are responsible for licensing, discipline and rules. Job 1 is to know the job, and you don't know the job."

But Nguyen notes Raffensperger in 2020 fired the board's executive director in a dispute unrelated to abortion.

She also says Raffensperger hasn't supported county election officials, noting that he recently had to retract incorrect guidance saying voters could be challenged at polling places. And she says he was inexcusably slow in calling in the Georgia Bureau of Investigation to pursue a criminal inquiry into how Trump-aligned election deniers breached voting equipment in southern Georgia's Coffee County.

"It's been 21 months, no one has been held criminally accountable ... It took a year and a half to bring GBI in to investigate those claims," Nguyen said in the debate. "This is about public trust, and the secretary of state's office mishandled that investigation."

Raffensperger defended his performance, saying "People broke the law, they should be investigated, held accountable, and go to jail."

He seeks to tie Nguyen to how Stacey Abrams, now in a rematch against Gov. Brian Kemp, ended her 2018 race. She acknowledged Kemp would be governor, but refused to use the word "concede," arguing Kemp had abused his two terms as secretary of state to hurt the Democrats' chances of winning elections. Raffensperger and others argue that Abrams' claims were damaging in the same way Trump's acts were after 2020.

"Don't you think that election denial is a threat to our democracy?" Raffensperger asked Nguyen.

Nguyen, though, keeps trying to persuade voters that Raffensperger is the threat to freedom, saying in an Oct. 19 appearance that high early turnout doesn't prove voting is secure.

"We in Georgia know that we have always had to out-organize voter suppression," Nguyen said. "Under Brad Raffensperger's tenure, voting rights have become more restrictive in the last four years, not more expansive." 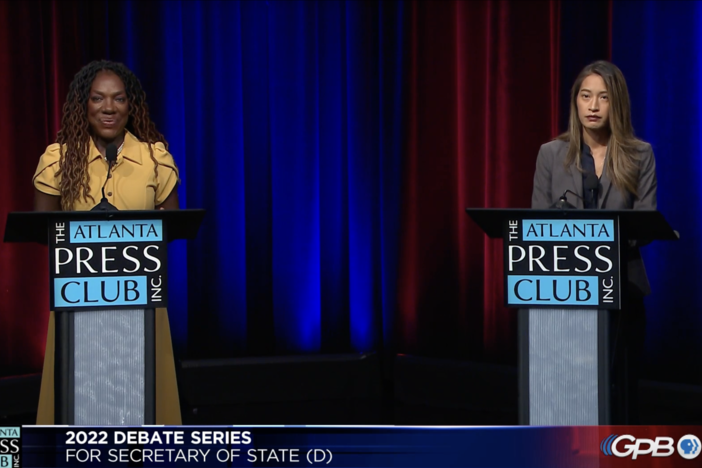 Both Democratic candidates for Secretary of State say Georgia's chief election official Brad Raffensperger has pushed conspiracies after standing up to others.