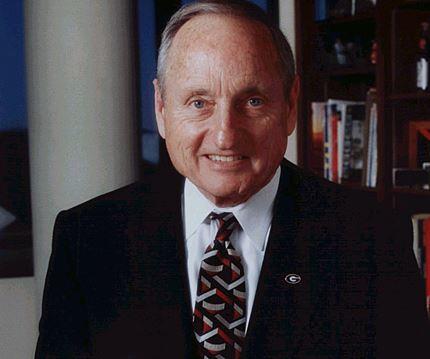 Dooley died Friday at his home in Athens. He was 90 years old.

“Legendary former University of Georgia football coach and director of athletics Vince Dooley died peacefully at his home in the presence of his wife and their four children Friday afternoon at the age of 90,” the university said in a statement.

A member of the College Football Hall of Fame, as well as the Georgia and Alabama Sports Halls of Fame, Dooley is Georgia’s winningest football coach with 201 victories, six SEC titles and the 1980 national championship in his 25 years leading the Bulldogs (1964-88). He was also the recipient of numerous awards for his service as director of athletics over a 25 year tenure (1979-2004).”

The UGA Football program and Gov. Brian Kemp were among those reacting to the legendary coach's passing.

Vincent Joseph Dooley was born in Mobile, Alabama, on September 4, 1932, the fourth of Nellie and William Dooley’s five children. Born and raised in the middle of the Great Depression, Dooley was remembered as a short-tempered, irascible youngster who early on recognized athletics might be the only thing keeping him from a life toiling in the shipyards of his hometown.

Dooley attended Mobile’s McGill Institute and was known more for his basketball abilities than his football acumen, though he was named quarterback at McGill as a sophomore and led his team to the Mobile City championship in 1949. Dooley agreed to attend Alabama’s Auburn University with the understanding that he would be able to play both basketball and football, but a knee injury during his junior year brought his basketball career to an end.

Dooley continued to excel at football under coach Ralph “Shug” Jordan, however, and in 1954 was invited to play in the College All-Star Game in Chicago (the All-Stars lost that game to the National Football League Champion DetroitLions, 31-6). With his playing days over, Dooley spent the next two years in the U.S. Marine Corps, an experience that would characterize his coaching style for the next thirty-two years. 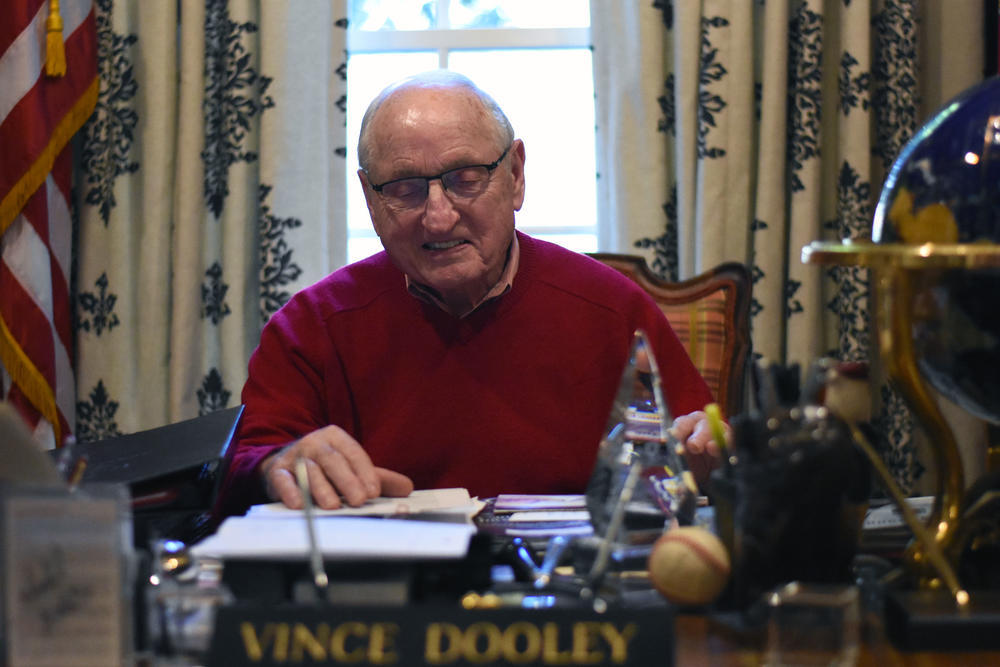 UGA hired Dooley as head football coach on December 4, 1963. At the time, Dooley recalled, fans had been hoping for a big-name coach with the experience to revive a troubled football program. But Dooley, who spent the first 10 years of his career as assistant coach at his alma mater Auburn, was not exactly what the Bulldog nation expected.

“At first they got excited because when they mentioned Vince, they were thinking maybe Vince Lombardi, one of the all-time coaching greats, but I think most people said, ‘Who in the heck is Vince Dooley?’” Dooley told GPB in a 2013 interview.

Inside the UGA archives, historical WSB-TV footage contains a speech Dooley gave to a local Rotary Club during his first season at Georgia in 1964. The tape cut short his remarks, but Dooley did outline two goals for the program.

“To win a reasonable amount of football games and secondly, to help send out young men who will represent well their state university, their hometown and their parents,” Dooley told the crowd then.

Most fans would agree Dooley won far more than a  “reasonable amount” of games—his record stands at 201-77-10.

“I was blessed I think early on,” Dooley explained. “I put a good staff together. We had some players that were very hungry and then I always enjoyed coaching college football.”

At the time of his retirement, Dooley was the second-winningest coach in SEC history, behind only legendary Alabama Coach Bear Bryant. He was elected into the College Football Hall of fame in 1994

Dooley retired from coaching in 1988 to focus on his post as athletic director, which he had held since 1979. During his tenure, he built Georgia into one of the most successful athletic programs in the country. He retired from that post in 2004.

Dooley briefly pursued the Democratic Party nomination for the U.S. Senate in 1986. His wife Barbara Meshad ran in the Republican primary for the U.S. House in 2002.  Kennesaw State University hired Dooley in late 2009 as a consultant in KSU's drive to start a football program.

One of Dooley's other passions was gardening about which he published a book, "Vince Dooley's Garden: The Horticultural Journey of a Football Coach." He also partnered with Mascot books to publish two children's books about the UGA mascot, How 'Bout Them Dawgs! and Hairy Dawg's Journey Through the Peach State.

Dooley served as Chairman of the Board of Curators for the Georgia Historical Society from 2016–2018. 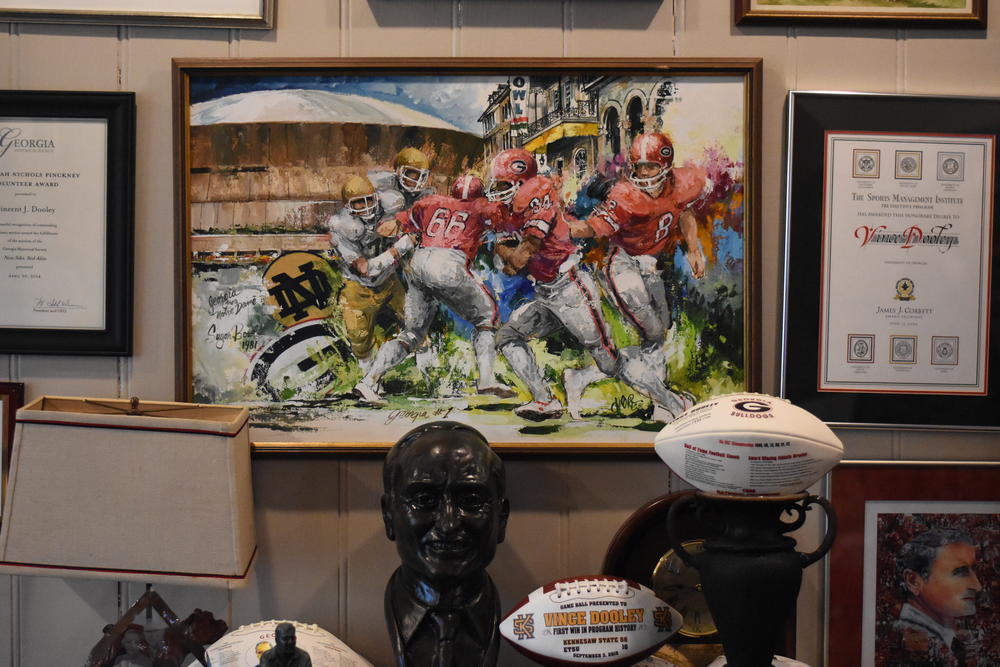 A painting in Coach Vince Dooley's Athens, Georgia home. It depicts players and scenes from the 1981 Sugar Bowl.

A lifetime of memories

Listen to the interview here. 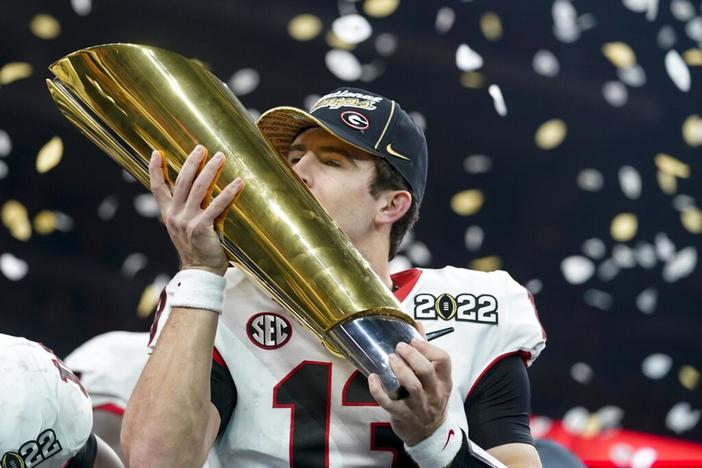 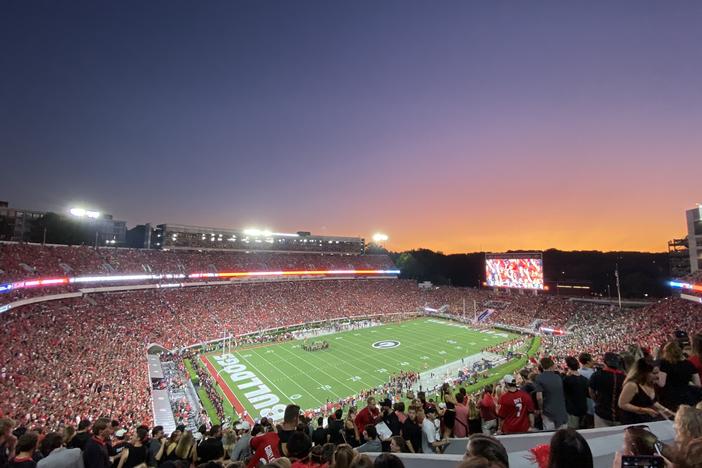 The University System of Georgia Board of Regents voted Tuesday to make a series of improvements to the south side of Sanford Stadium.