When a regional theater got millions to remake itself, it focused on racial healing 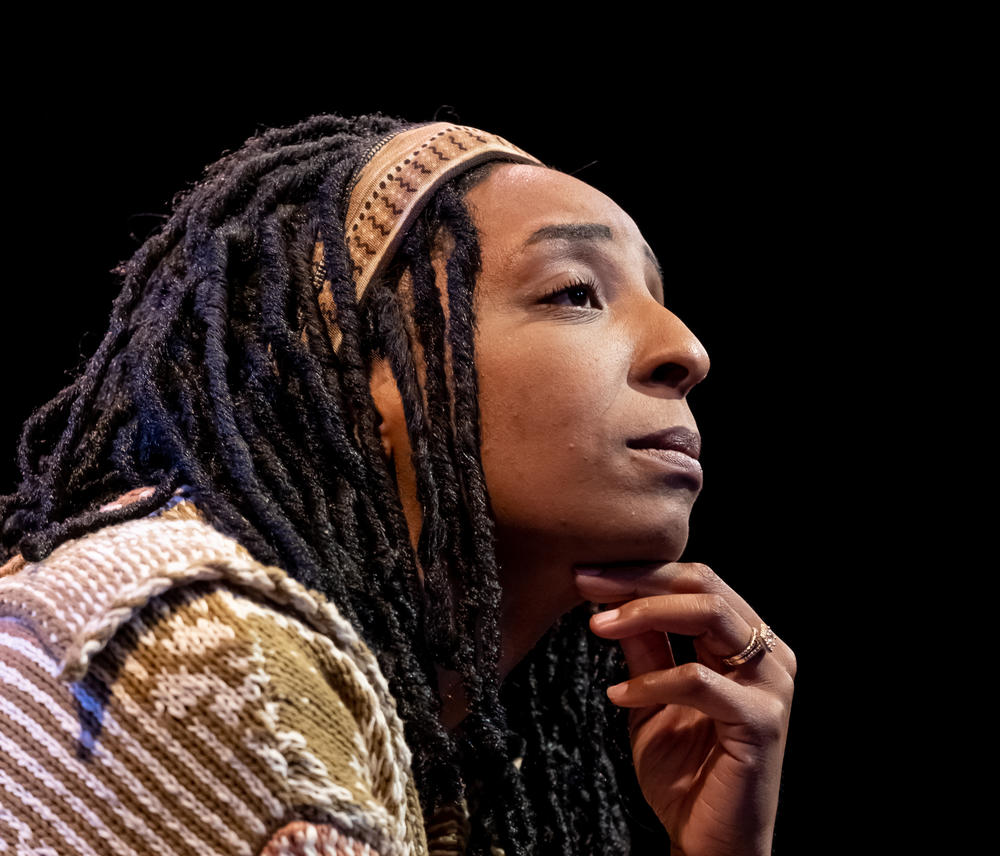 Vinecia Coleman in "Weathering" at the Penumbra Theatre. / Caroline Yang

Recovering from the worst days of the pandemic has been daunting for America's 1,800 regional theaters. But some, thanks to philanthropic help, are using this moment as an opportunity for reinvention.

Take, for example, Penumbra Theatre in St. Paul, Minn., which is grounded in a historically African-American neighborhood with aesthetic roots in the Black Arts Movement. Since Penumbra started staging plays in the early 1970s, it's developed a national reputation for growing Black talent that's changed theater worldwide.

"I remember August Wilson telling me stories right here in the hall that turned out to be plays," said Lou Bellamy, the theater's founding artistic director. For years, Penumbra was Wilson's home theater; it was where the Pulitzer Prize-winning playwright developed works that are now considered masterpieces, including some set in his native Pittsburgh. 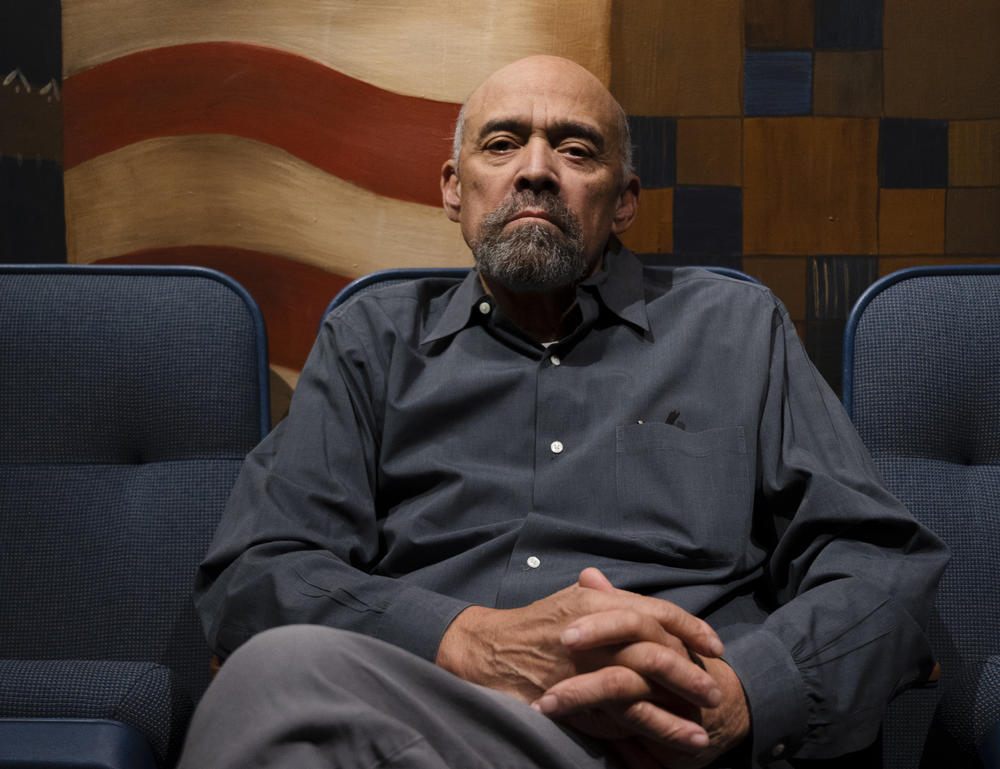 Yet the theater was constantly running short of money. "We've mortgaged our house many times to make payroll," Bellamy said.

But last year, Penumbra's fortunes changed. The scrappy company, first created with the assistance of federal funds from the 1973 federal Comprehensive Employment and Training Act, received an unexpected $5 million gift from MacKenzie Scott's foundation, on top of a $2.5 million grant from the Ford Foundation as part of its "cultural treasure" initiative.

"It was shocking," said Sarah Bellamy, who took over from her father as Penumbra's artistic director in 2017. "It was like a green light from the universe that we were on the right path." 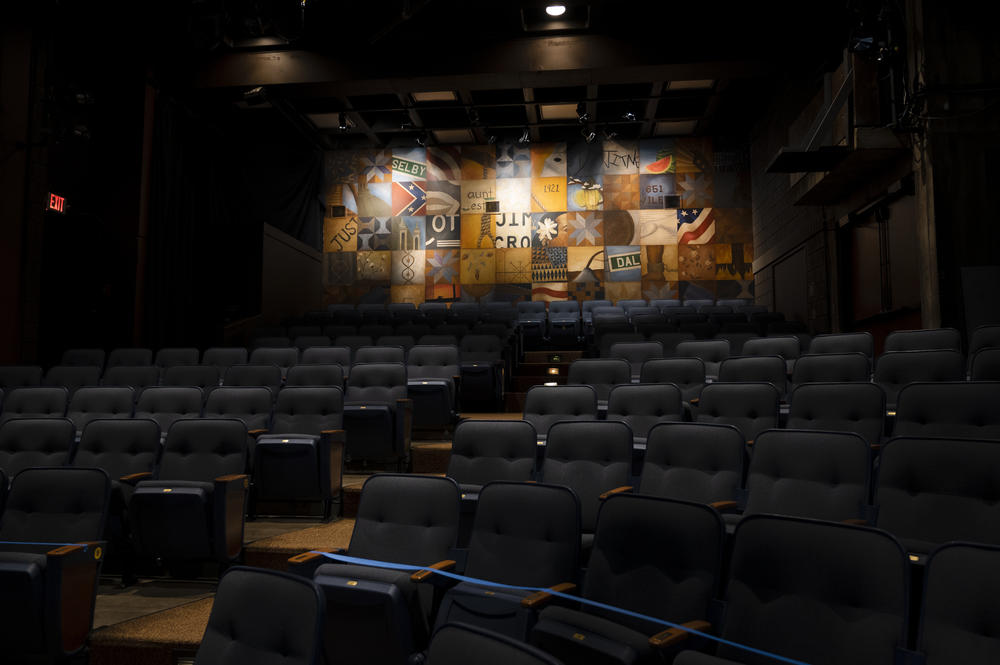 The funds will allow them to hire more staff and commission more plays. But it also helps Sarah Bellamy move forward to achieve her dream; to transform Penumbra, which is located only a few miles from where George Floyd was killed by a police officer, into a center for racial healing; an organization that creates programming that promotes wellness, equity and the arts.

"You really need all three of those things in order for it to be fully realized," she said.

The first original play Penumbra developed in the wake of this philanthropic windfall was Weathering by Harrison David Rivers. Rivers has another play, the bandaged place, premiering off-Broadway this fall.

Weathering is a term used in public health to describe how discrimination and marginalization affect physical well-being and long-term mortality. It was coined as part of a University of Michigan study that looked at fertility issues and high-risk pregnancy rates for Black versus white women. Rivers first learned about it in a 2018 New York Times article. 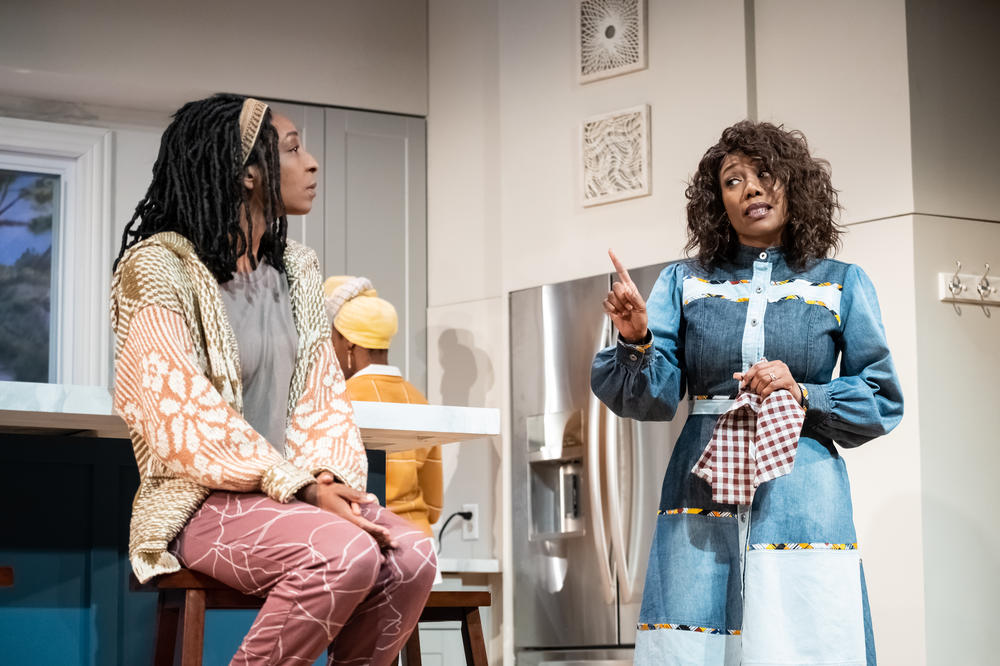 Vinecia Coleman and Austene Van in Weathering at the Penumbra Theatre. / Caroline Yang

"It made me incredibly sad, and I remember reading it and crying and thinking, if I'm having this kind of emotional response to these lived experiences, these terrors, there's probably a play here."

Rivers wasn't certain if a male-identified person was right to take on the topic. But Bellamy convinced him to do it. "Sarah . . . beautifully said to me, 'I know you and I know the kind of writer you are and if you have been struck by this material, if you feel a pull, than we will 100 percent explore this pull," he said. "She gave me her blessing."

The dynamic, emotionally-fluid production has received strong reviews in local papers. The Minneapolis Star-Tribune called it "a buoyant blast of joy."

The play takes audiences — and the cast — from the grip of grief to the release of laughter. It's an emotional show. To counter that, Penumbra gave the entire artistic team for Weathering, including the actors, playwright and crew, a wellness stipend on the first day of rehearsal. It could afford to do that, thanks to the grants it received.

"I wasn't expecting it," director Colette Robert told NPR. "There are institutions that retroactively do something like that if something comes up – but the forward thinking to be like, 'Hey, this is kind of a heavy show, treat yourself throughout the process' was just really extraordinary." 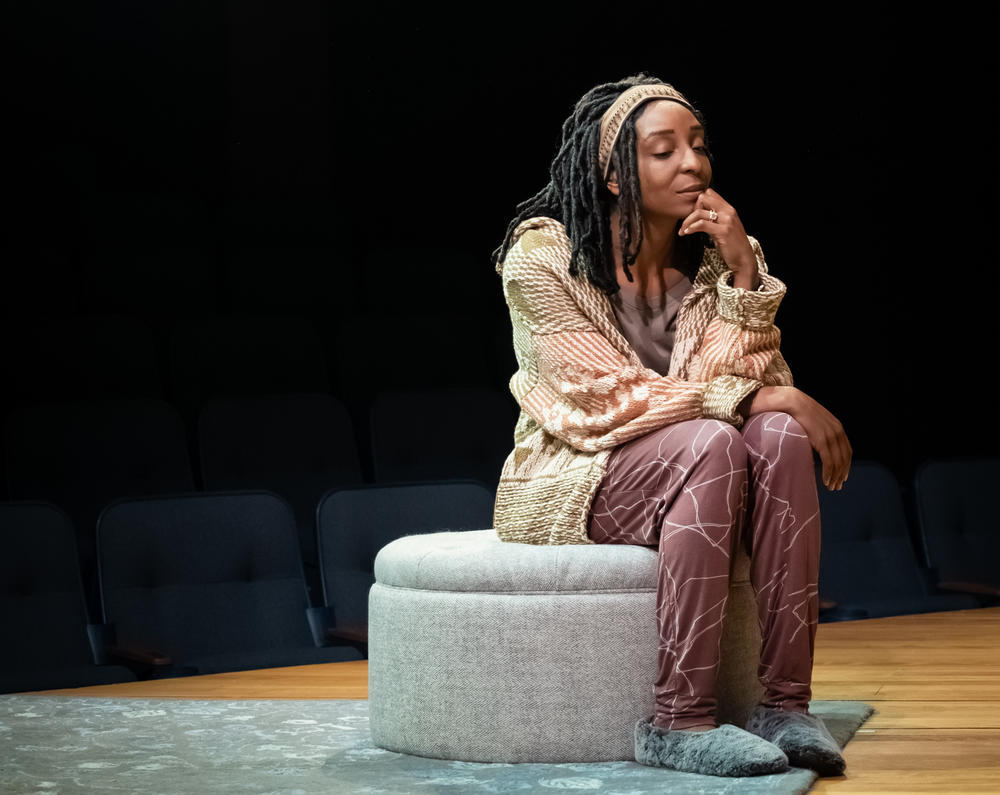 "Weathering" at the Penumbra Theatre looks at the unequal treatment of Black women when it comes to maternity care and childbirth. / Caroline Yang

To be a well-resourced theater that lives by its politics also means that Penumbra paid a number of birthing professionals, people of color who are midwives and doulas, to lend their expertise to the production. Some were brought on before the play was even written.

"Not because we wanted the show to feel more authentic, or for character development," said Sarah Bellamy. "We wanted the artists who are shepherding this piece into being to know the sacred work they were entering into, illuminating an issue that is killing people."

Communicating a visceral sense of the stakes of this play fell in part to certified nurse midwife Jennifer Almanza, who works at Regions Hospital in St. Paul.

"These connections between community theaters and institutions like Regions Hospital, they're new," she said. "I'd say they wouldn't have been possible even three years ago. That in and of itself is bringing about racial healing."

Surviving as a theater isn't just about money. One of the things that helped keep Penumbra alive during its lean years was the Twin Cities' vibrant and diverse arts ecosystem, Sarah Bellamy said. "There's a lot of sense of scarcity in regional theater," she said. "And that competitive mentality will kill everything." 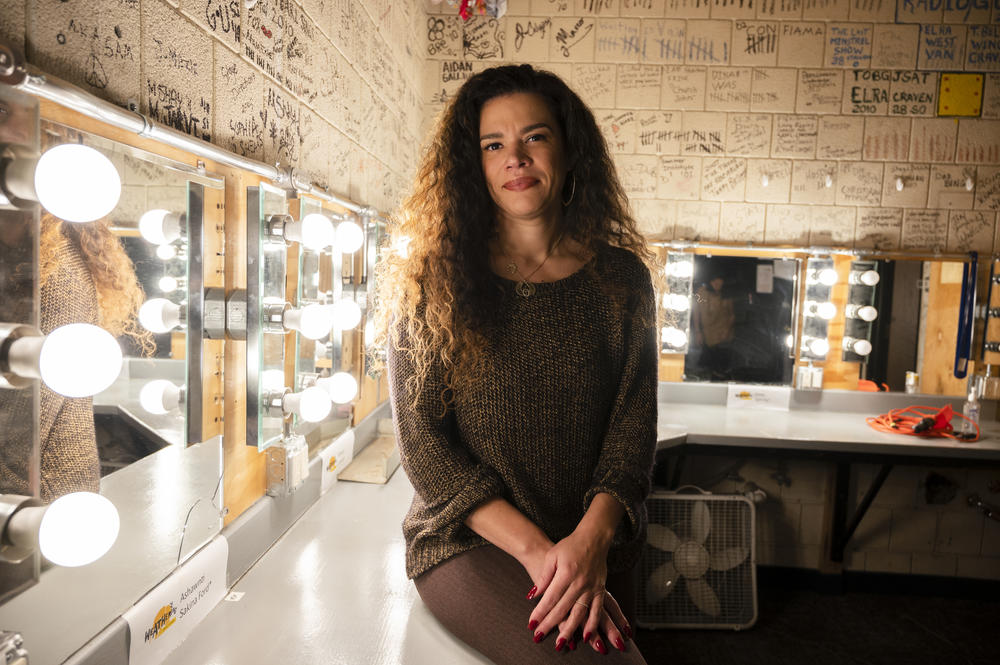 Sarah Bellamy poses for a portrait in the dressing room backstage at Penumbra Theatre on Oct. 24, 2022. / Andrea Ellen Reed for NPR

But theaters in the Twin Cities share talent and resources, which allows everyone to grow, Bellamy said. She credits the famous Children's Theatre Company of Minneapolis for nourishing a robust audience that benefits the entire community.

The Children's Theare Company "is so many kids in Minnesota's first introduction to theater," she said. "If that didn't exist, would we have the audiences that we do here, generation after generation? If the Guthrie [Theater] hadn't been founded here, would these other organizations have the ability to thrive?"

Looking back to move forward

When Penumbra first started, it offered free childcare — a still-radical idea that more theaters are beginning to experiment with today. Now it's using new resources to develop programming for kids that will complement what their grownups see on stage. Back in the day, Penumbra also allowed anyone in the community to walk into rehearsals. Theater artist Daniel Alexander Jones loved that aspect when he developed new plays with Penumbra in the 1990s.

"Some of the best dramaturgical advice I've ever gotten was from 7, 8, 9-year-old girls who were like, 'She shouldn't do that,'" he said, laughing, during a Zoom interview. It's that kind of investment and trust in a community that is so important in the theater world, he said. 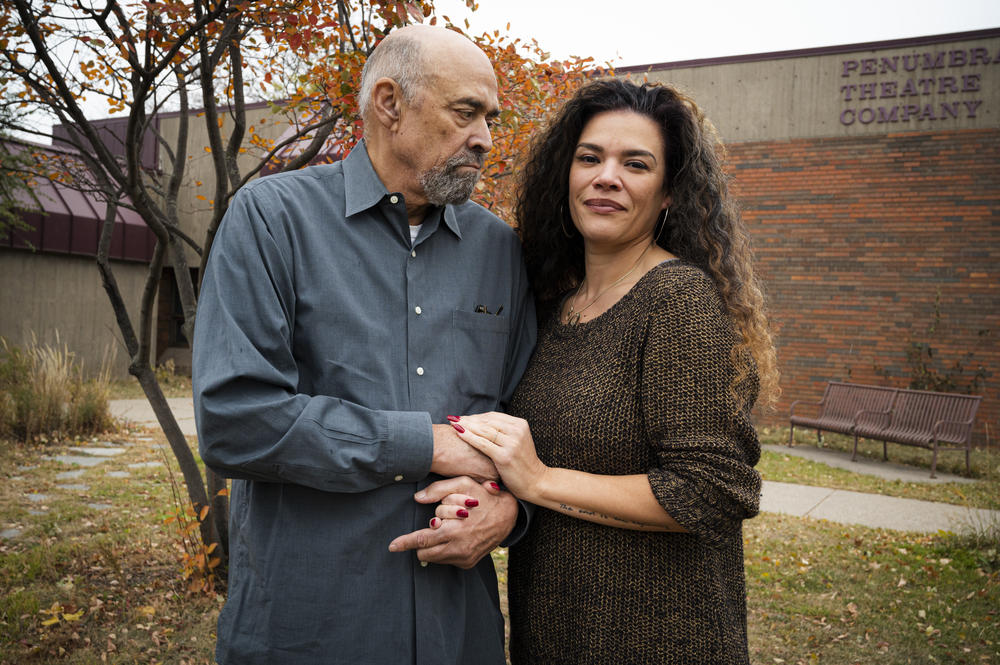 "What does it mean to value your own?" he asked. "It means you're not going to have that major brand label. Somebody didn't give it a five star review. Someone didn't vet it and produce it six times. It may be messy. It may be bloody. It may not yet have found its full footing. And for me, when I look back at the most vivid, exciting and life-changing art, it is invariably the art that is wild and alive like that."

Wild and alive art will survive, Jones said. It will outlive TikTok. We just have to find it. And each other.

Tags: Series: The Next Stage 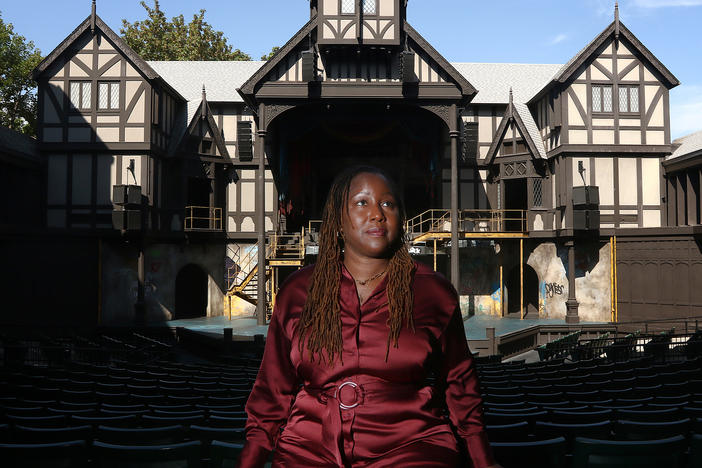 After two years of pandemic closures, audiences are back at the Oregon Shakespeare Festival, to find a season of diverse plays. But for many, change has come too soon. 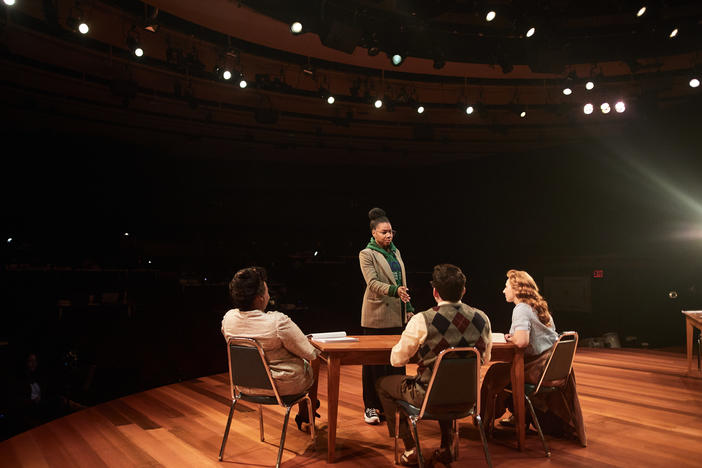 Without more federal money, what will regional theaters do?

Subscriptions and ticket sales are down, but theater is needed more than ever. What theaters are doing to survive. 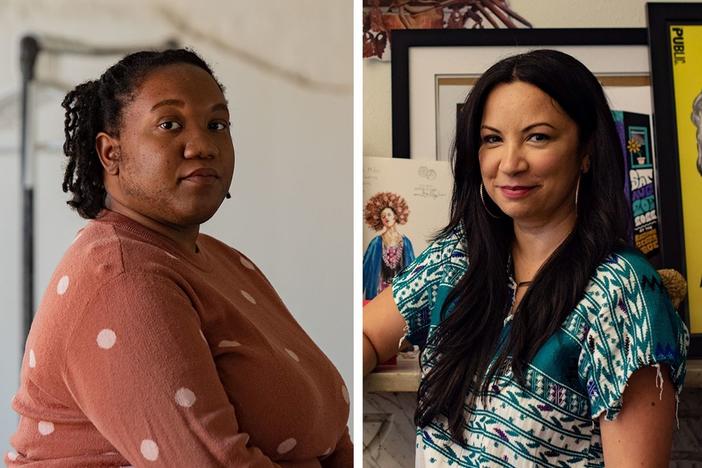 Working in theater is a grind. But it doesn't have to be

The hours are long and the pay isn't great. But one theater in Baltimore is trying to rethink its labor practices to make theater a better workplace.