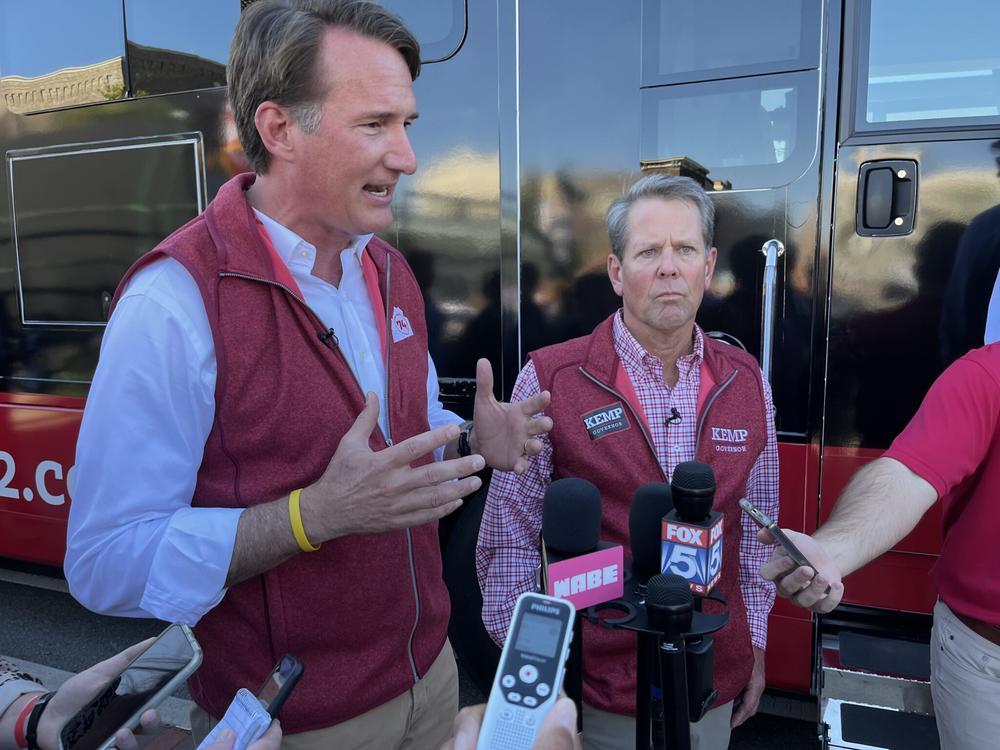 Georgia Gov. Brian Kemp hit the Atlanta suburbs Tuesday in hopes of firing up conservative voters in an area that has been moving toward Democrats in recent elections.

Kemp took the stage in Alpharetta’s City Center with Virginia Gov. Glenn Youngkin, whose narrow win last year and success in suburban areas made him a rising star in GOP politics. Youngkin has been campaigning for Republican candidates in other battleground states, like Michigan and Nevada, stirring speculation about his own political aspirations.

“Every state in America deserves a Republican governor,” Youngkin told reporters when asked about whether the 2024 election speculation has become a distraction for him.

Kemp and his opponent, Democrat Stacey Abrams, have both said they would support issuing another refund next year, though they have differing visions for what to do with the rest of the state’s budget surplus.

“Elections are about the future, and we’ve got to be standing for something,” Kemp said to the crowd Tuesday. “We’ve got to give people a reason to vote for us, and we’re gonna do that. Because when we get back in January after we win this election, we’re gonna send another billion dollars back to the taxpayer because we have excess revenue to do that.” 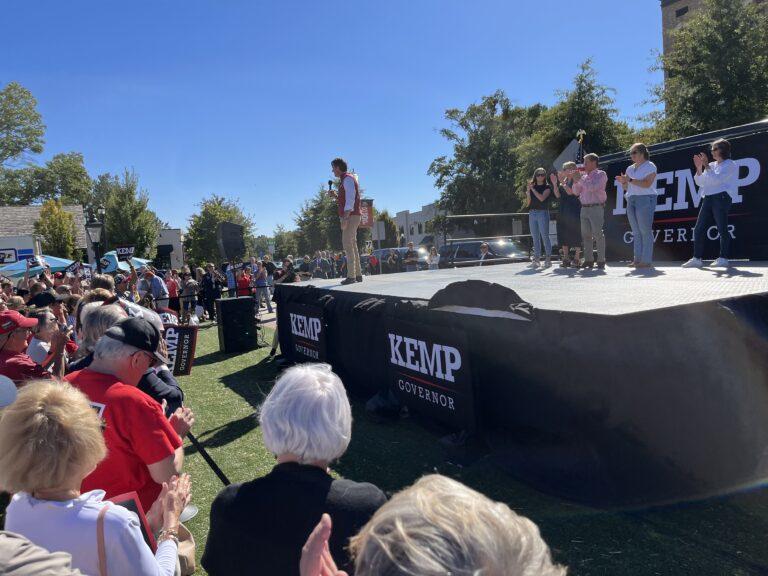 Kemp has been leading Abrams slightly in the polls, but the last day of voting is still six weeks away. When asked Tuesday if the Democrats’ ground game was still a concern of his, Kemp quickly responded “damn right it is.”

“I will tell all those people out there, don’t believe any of these polls. You cannot underestimate their ground game,” he said. “We cannot get overconfident. We have to work like we’ve never worked before, and we have to have a ground game quite honestly that can compete with theirs. And I believe this year we’re going to do that. We’re never going out to outspend them, but I do believe we’re going to outwork them.”

Kemp pushed for and signed into law several controversial education bills earlier this year, including one measure setting the stage for the Georgia High School Association to require transgender athletes to play on the team aligned with the gender identified on their birth certificate. And he was cheered Tuesday after saying “we’re going to make sure that we have fairness in girls’ sports” when rattling off a list of education-related policies.

On the same day Youngkin stumped for Kemp in Georgia, students back at some Virginia schools participated in a planned walkout to protest Youngkin’s proposed rollback of transgender-inclusive K-12 policies.

Kemp was among those watching the Virginia governor’s race closely from afar. Abrams was more directly involved: She traveled to Virginia to campaign for McAuliffe.

Youngkin’s win was also notable at the time because he received Trump’s endorsement but still managed to maintain distance from the polarizing figure.

Like Youngkin, Kemp is trying to appeal to the state’s pro-Trump base while targeting more moderate suburban Republicans who may have been turned off by the former president. But unlike his Virginian counterpart, Kemp has been a favorite target of Trump’s ire ever since he refused to help overturn the 2020 presidential election results.

“Kemp essentially is hoping to replicate what Youngkin was able to achieve in Virginia, and that is hold on to the bulk of the Trump vote but then also bring into the fold those anti-Trump Republicans who voted for Joe Biden or voted for Raphael Warnock,” said University of Georgia political science professor Charles Bullock.

“The other part is that Youngkin, like Kemp, never trashed Trump but on the other hand, he always kept Trump well at arm’s length. Now, Brian doesn’t have to worry about keeping Trump at arm’s length. Trump is at least that far away and maybe further. But Kemp would like to be able to run again without Trump having an influence.”

Trump backed a slate of GOP candidates in the state’s primaries with limited effect. Kemp easily defeated Trump’s pick for governor, former U.S. Sen. David Perdue, but two of the former president’s other favored candidates, Herschel Walker and Burt Jones, will appear on the ballot this November.

Trump is said to be considering a Georgia rally next month, the Atlanta Journal-Constitution has reported. That’s not good news for Kemp, Bullock said. Even if Trump doesn’t directly attack Kemp, any continued talk about a stolen election in Georgia could stir up the anti-Trump vote and hurt Republicans on the ballot, he said. 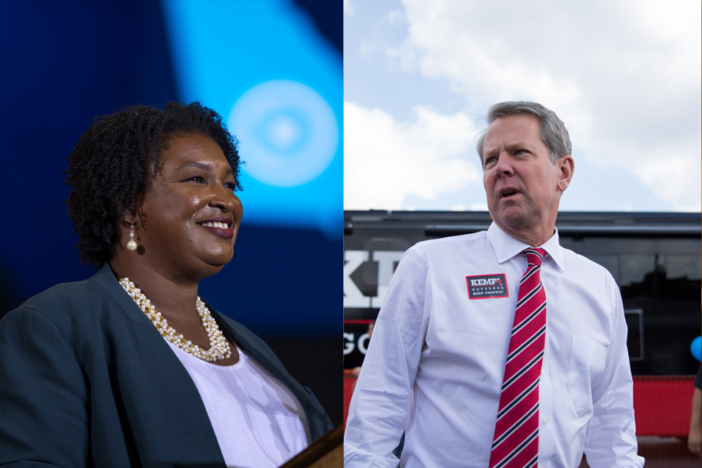 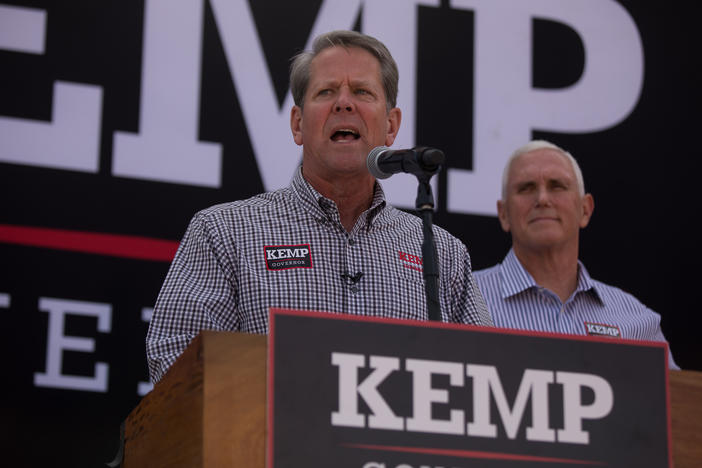 On the cusp of winning a second term, Gov. Brian Kemp is urging voters to ignore polling and turn out in force. 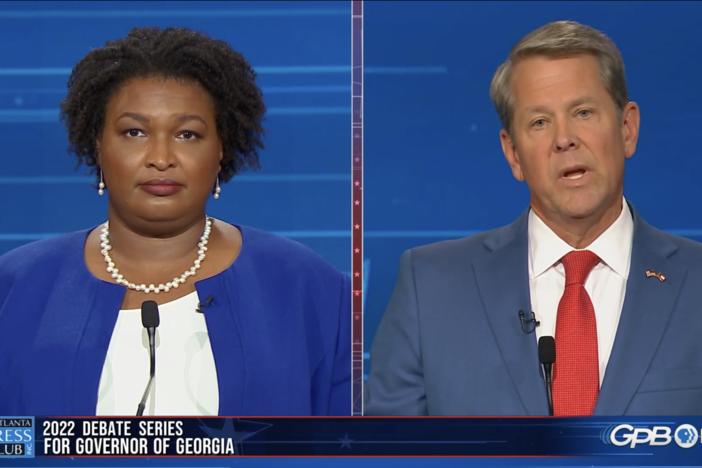