One thing is top of mind for many young Brits, and it's not the royal family 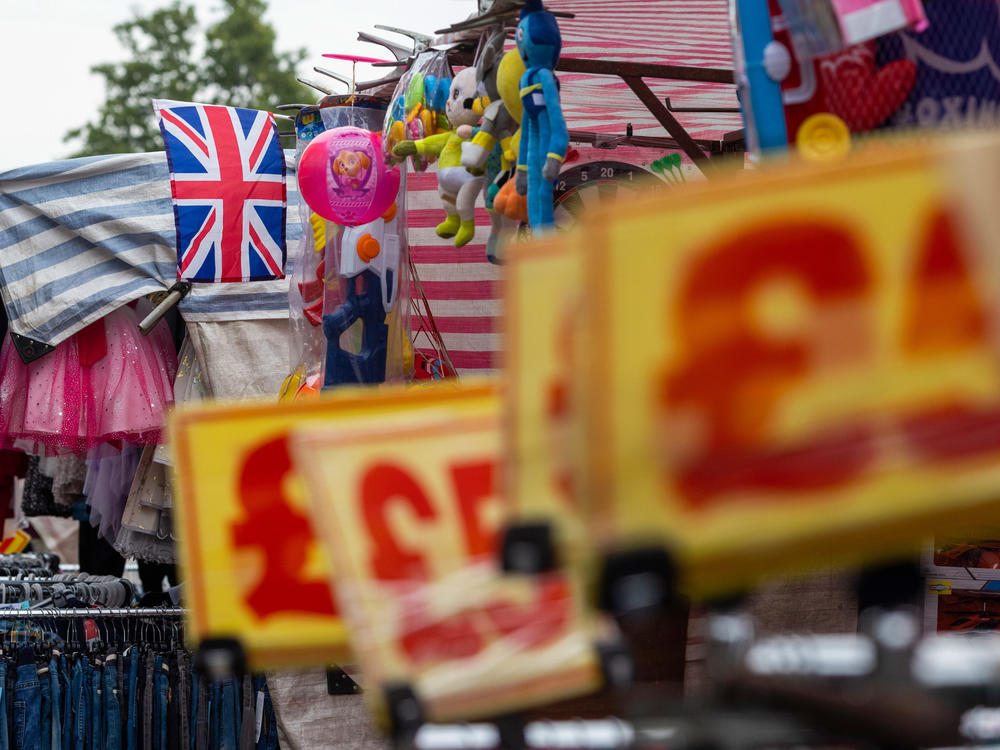 Some of the people lining up to visit the queen's casket and staking out spots along the funeral route described the moment as offering a much-needed dose of community and positivity amidst challenges like COVID and the war in Ukraine.

But it's also been a source of frustration for people who say the extent of the focus and coverage is distracting from other important subjects — like, for example, the hurricane that knocked power out across Puerto Rico on the day of the queen's funeral.

Closer to home: The queen died just two days after appointing Liz Truss the newest prime minister of the United Kingdom, which is facing economic and energy crises. King Charles' decision to make Monday a bank holiday drew backlash from Britons over the closure of food banks and hospital services. And, as several young Londoners told NPR, the elaborate funeral proceedings are costing a lot of money at a time when many ordinary people are struggling to make ends meet.

NPR interviewed nearly a dozen people throughout London about what else has been on their minds throughout the mourning period and, now that the funeral is over, what they hope to see next. Nearly everyone had the same primary concern: the economy, particularly the decline in disposable income known as the cost of living crisis.

"How am I just going to live?" asked 22-year-old Atiya Chowdhury, a recent master's graduate who spoke with NPR over the weekend. "I feel like a baby that's come out of an egg and the sun is too bright, and that sun is the cost of living." 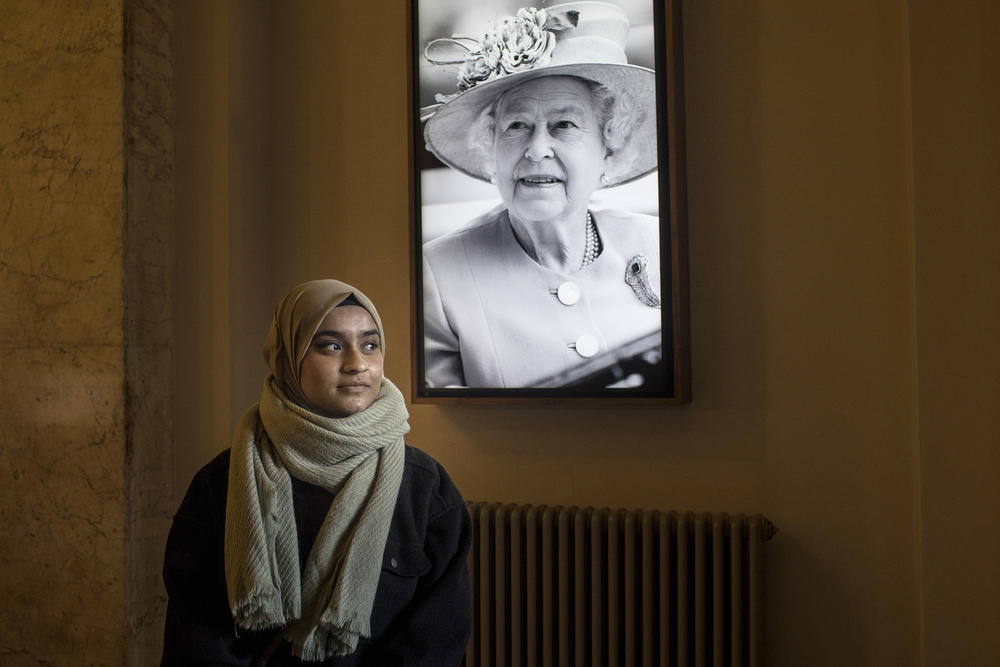 Atiya Chowdhury, 22, poses next to a picture of the late Queen Elizabeth II in London on Sunday. / Elizabeth Dalziel for NPR

Britain's cost of living crisis began in late 2021, spurred by high inflation and exacerbated over the last year by tax increases and rocketing energy prices, according to the think tank Institute for Government. Wage growth hasn't been able to keep pace with record inflation, and the tax increases announced last year were the largest (as a share of national income) since the early 1990s — considerably weakening the purchasing power of people across the U.K.

The Consumer Price Index (which measures the average change in prices paid by consumers over a period of time for a basket of household goods) rose by 8.6% in the 12-month period leading up to August. That's according to the U.K.'s Office for National Statistics, which says the rising cost of electricity, gas, motor fuels and food is to blame.

Gas is getting more expensive for a number of reasons, including supply shortages and disruptions caused by Russia's war in Ukraine. Most Brits rely on it to generate electricity and heat their homes, and are already worried about the cold months ahead. 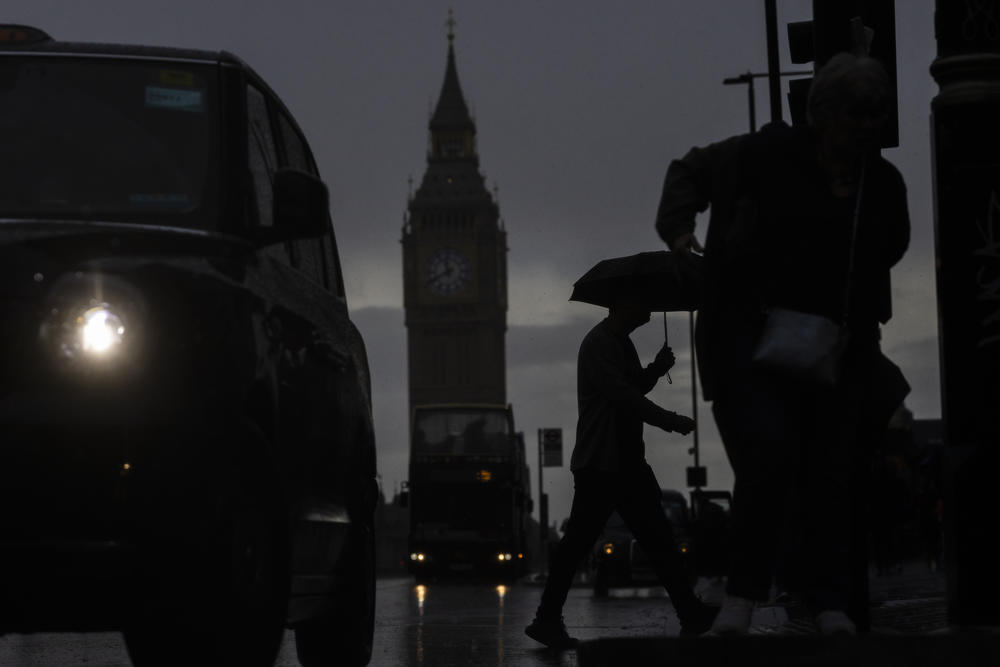 The British government has taken some steps to try to address the crisis, like giving all U.K. households a discount on energy bills as of October, and one-off subsidies to some 6 million people on disability payments beginning Tuesday.

But there's concern that it's not doing enough to help those who need it. After Truss announced last week that she plans to implement an energy price freeze and tax cuts, the think tank Resolution Foundation released a report saying her strategy would give the richest tenth of households, on average, twice as much financial support as the poorest tenth.

Young people in London told NPR that as much as they would like the government to take stronger action, they aren't optimistic given the Conservative Party's track record. 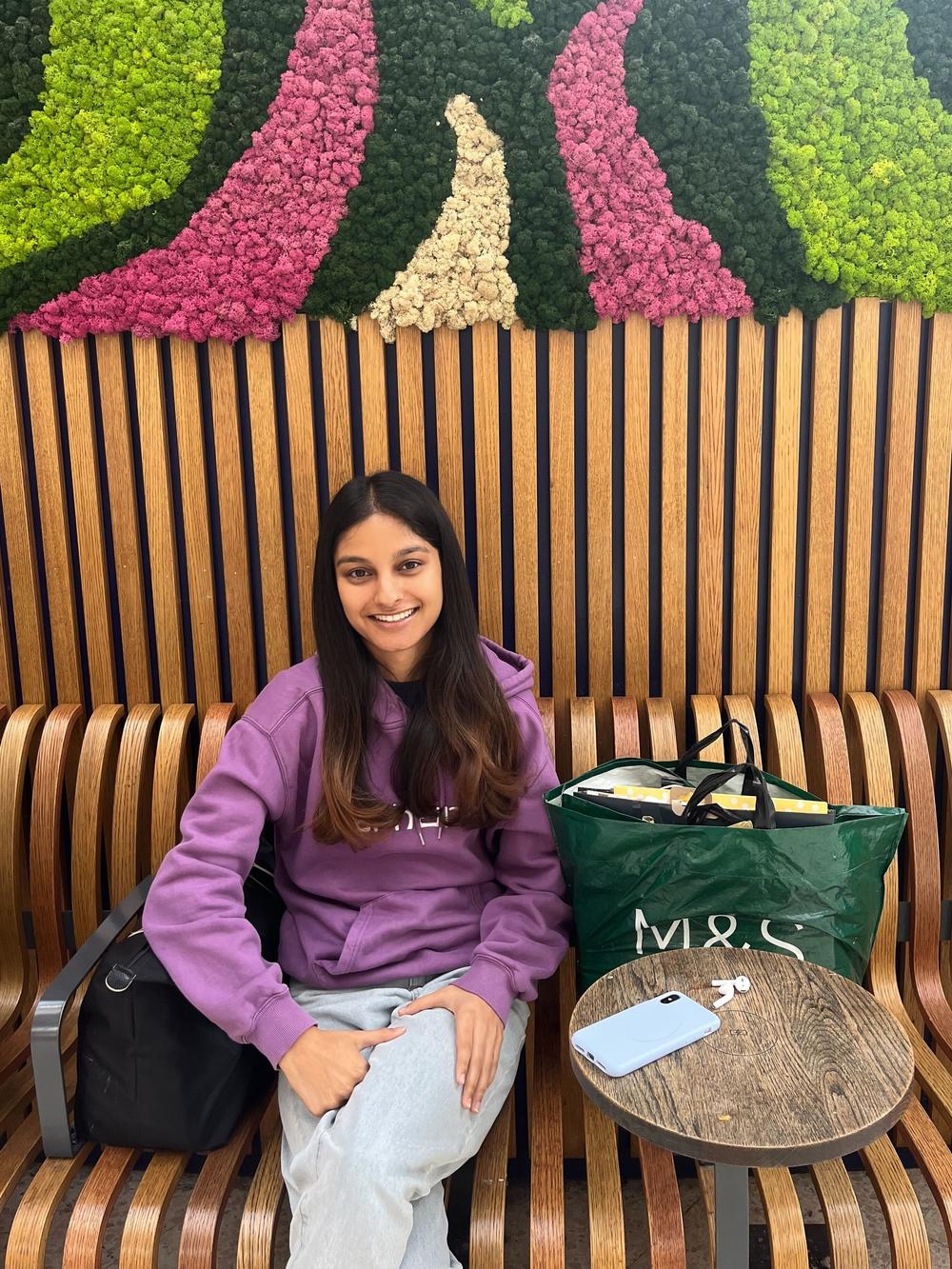 Sara Moghal waits for her train at Victoria Station in London on Tuesday. / NPR

"I can't see them being very welfare-based and giving handouts, but that's what they have to do to allow people to live," said 20-year-old Sara Moghal while waiting at Victoria Station for her train back to university. "Otherwise there will be dramatic changes in people's lifestyles, which I don't think is very good for the country."

While she's hopeful that her family will fare OK, she's worried about what the crisis will mean for the public as a whole, especially come winter.

"No matter how much income you have, it's really going to impact everyone," she adds.

The crisis is affecting people differently

Thirty-year-old Dorian Mills, an operations manager for a cocktail company, says the cost of living is becoming unreasonable — his rent increased again this month, and he didn't get the raise he was hoping for.

"If I just spend my money on food and rent I'm all right," he says, adding that he's lucky because as part of his housing arrangement (called a guardianship scheme) he only pays rent, not utilities. 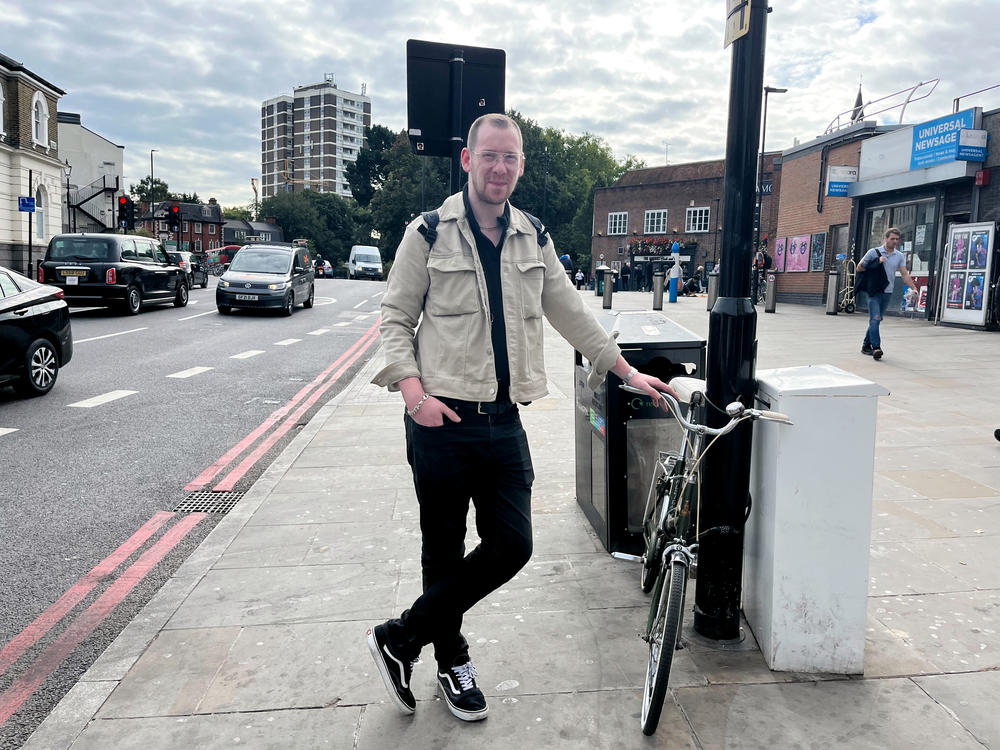 Dorian Mills in the inner borough of Islington, London, on Tuesday. / NPR

Still, even visiting his parents in Brighton — some 70 miles away on the coast — as often as he'd like to can be a financial and logistical challenge. Mills says train tickets can go for some 40 to 50 pounds ($45-60).

"It doesn't make sense when you can get a flight with EasyJet or Ryanair to Spain or Málaga for about 40, 50 quid," Mills adds. "It costs pretty much the same to get from here to Brighton as it does from here to Spain."

Mills doesn't believe the government is the solution, since he thinks the Conservative Party — which has governed for over a decade — has failed to invest in infrastructure and help anyone other than the wealthy. What would he like to see going forward?

"Caps on rent, caps on energy, caps on food, caps on everything," he says.

Mills thinks nationalizing energy and railroads could be a solution, or at least one worth trying. More and more, people are realizing that the current system needs to change, he adds.

"I'm all for capitalism and stuff if you are selling the right way," he says. "I think people should be able to make their money ... but not when it's just all the money going to a couple of people."

Bunmie Moj, 33, says the cost of living is one of her top concerns. She runs a custom printing company and needs to make sure the business stays afloat so she doesn't have to worry too much in the winter.

But, like several other people NPR spoke with, she's also trying not to worry too much.

"I just take every day as it comes," she says. "But I know other people, it's affecting them a lot more ... A lot of their bills are going up and there's a lot of concern about how they're going to pay it."

Some people have different perspectives. Frida Cakmak shared hers from behind the counter of the ice cream truck where she works, parked in the tourist destination of Piccadilly Circus. She moved to London eight months ago from Istanbul, where she used to work as a manager in a law office.

Cakmak had long thought about leaving Turkey because of the state of its economy, particularly the weak lira. She says she only plans to go back as a visitor. 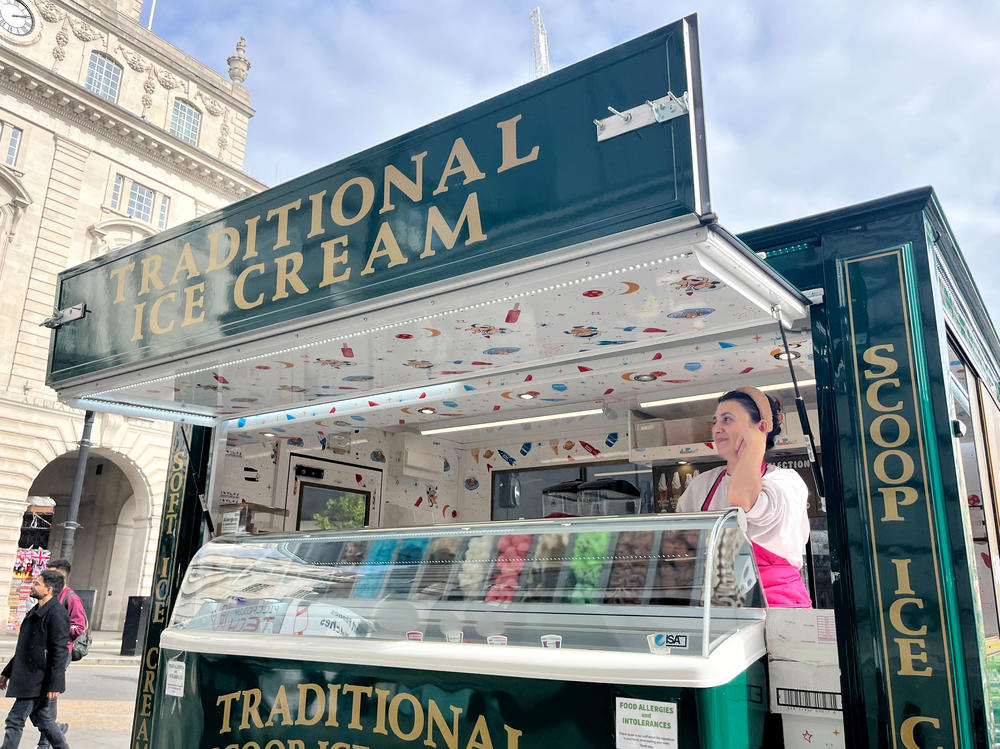 Frida Cakmak at the ice cream truck where she works in London's busy Piccadilly Circus on Tuesday. / NPR

"I'm here and I'm so happy living in London, really," she says. "The social life is better, the working life is better and, of course, the money is really, really good here."

The economy is just one of Britain's problems

Some people told NPR about other issues on their minds, including climate change and public safety. Several said that taken together, all of the problems facing the country can be discouraging to look at head-on.

"I think there's so many political challenges that are going on with the war in Ukraine, energy prices, domestic issues," said Maddie Baker, another recent graduate. "I think all of that coming together, it makes quite a bleak picture for a young person ... It's kind of hard to be hopeful at the moment with stuff like that."

Moghal, the university student, isn't planning to stay in the U.K. for long. She has her sights on Dubai.

"I just think it's quite depressing at the moment," she says, adding that Britain seems to be dealing with economic issues that its European neighbors have handled better. "I turn on the news and all that's there is just sad stories and depressing news all the time."

As Mills sees it, there's a lot of discontent in the country but not a lot of activism. He says people don't protest anymore, and "it's almost like we're sitting ducks."

"We're very good at being in sort of minorities and sort of pushing for individual things," he elaborates. "But when it comes to actually coming together fully, we're rubbish."

NPR spoke with Mills on Tuesday, just after crowds lined streets and parks for days straight in order to pay tribute to the late queen. People came together during those days, and many said the highlight of their experience was the shared community.

How does he reconcile that? "Mass delusion," he laughs, but says in all seriousness that it was nice that people could come together to mourn — regardless of their personal feelings about different parts of the queen's legacy. As for his own feelings, he says, he can't quite figure out why the royal family is so important to the country. 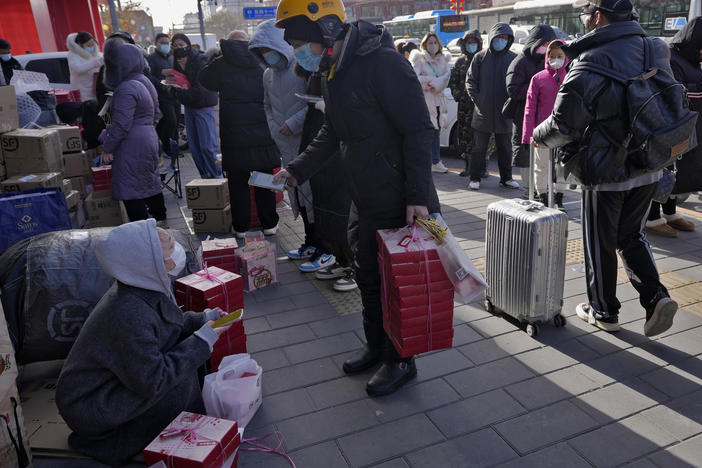 With COVID lockdowns lifted, China says it's back in business. But it's not so easy

China has been trying to woo back foreign investors and businesses after nearly three years of self-imposed isolation, but a quick economic recovery will also hinge on domestic consumption. 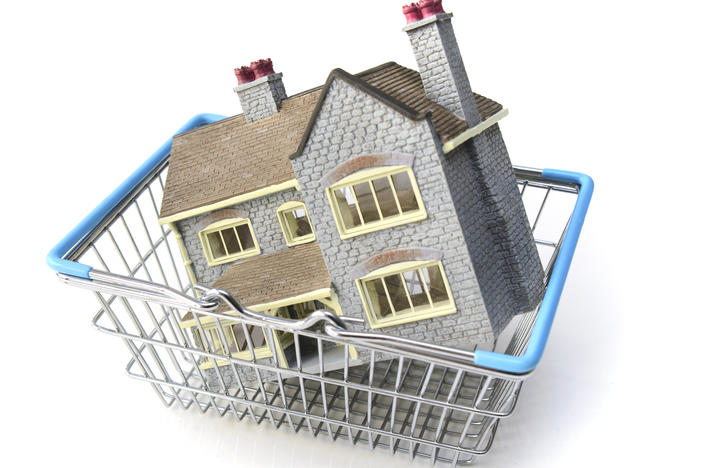 Boy, have we talked a lot about inflation. It affected every part of our lives (and the economy) in 2022. Here are some of its highest highs and lowest lows. (It wasn't all bad news!) 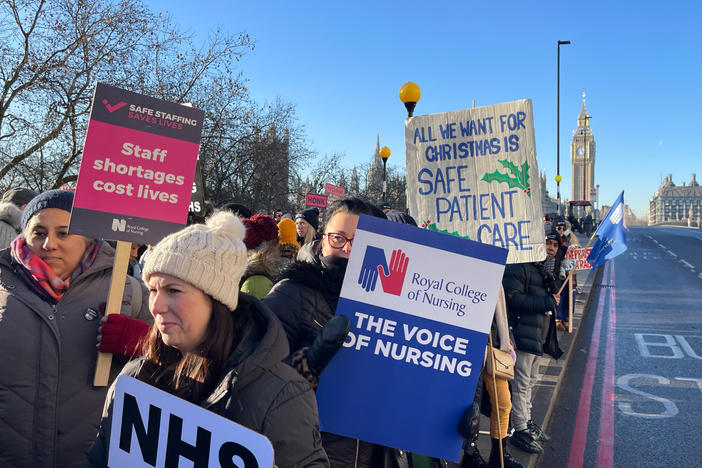 Britain is seeing a wave of strikes as nurses, postal workers and others walk out

Nurses, postal workers and railway employees are all walking out this month in the U.K.'s largest series of labor actions in more than a decade. It's a major challenge to Prime Minister Rishi Sunak.