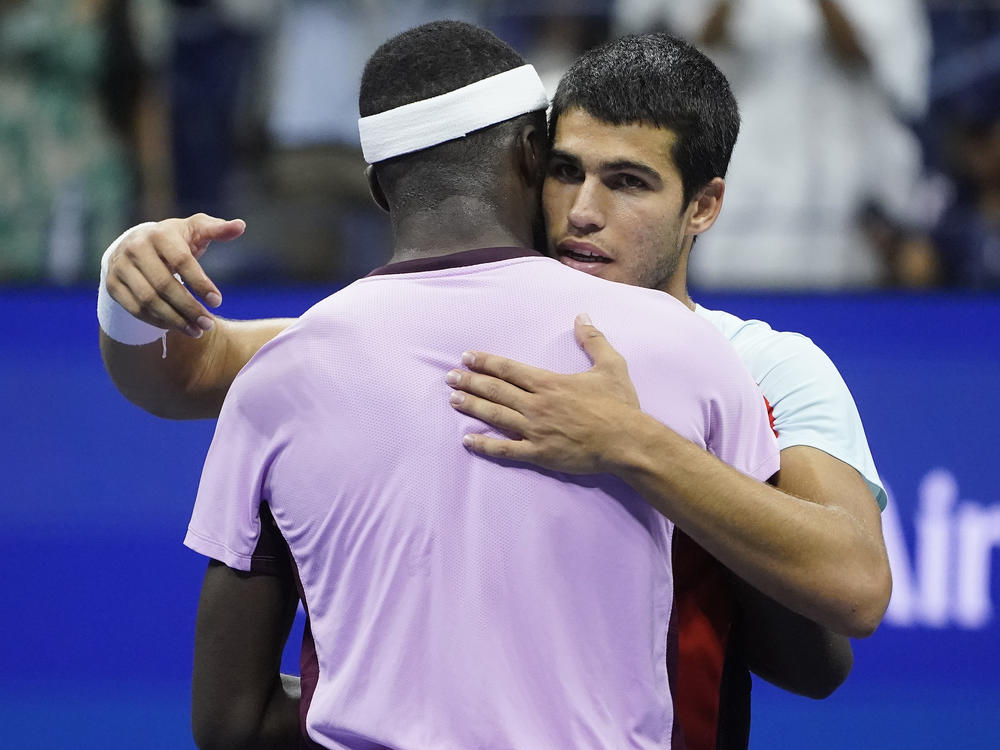 NEW YORK — Carlos Alcaraz and Frances Tiafoe engaged in a high-level, high-energy spectacle of a back-and-forth semifinal at the U.S. Open — no point over when it seemed to be, no ball out of reach, no angle too audacious.

One sequence was so stuffed with "What?! How?!" moments by both men that Arthur Ashe Stadium spectators were on their feet before it was over and remained there, clapping and carousing, while watching a replay on the video screens.

"It was so electric. I mean, the tennis definitely matched the hype of the match. Unbelievable shot-making, gets, extending points, crazy shots ... at crazy times," Tiafoe said. "Yeah, I was getting riled up."

Alcaraz appeared to seize control by grabbing nine of 10 games in one stretch and could have ended the evening when he held a match point in the fourth set. But Tiafoe, who is ranked 26th, saved it and soon was yelling, with some colorful language mixed in for emphasis, "I'm putting my heart on the line!" Soon after that, Tiafoe was forcing a fifth set by improving to a U.S. Open-record 8-0 in tiebreakers.

Still, Alcaraz showed no signs of fatigue despite playing a third five-setter in a row — including a 5-hour, 15-minute quarterfinal win that ended at 2:50 a.m. on Thursday, the latest finish in tournament history — and was better when he needed to be, taking four of the last five games.

Now No. 3 Alcaraz will face No. 7 Casper Ruud for the championship Sunday with so much on the line: The winner will become a major champion for the first time and lead the rankings next week.

"It's amazing to be able to fight for big things," Alcaraz said.

Alcaraz and Tiafoe were both making their major semifinal debuts and offered an exceptionally entertaining performance for a little more than a set, and a little more than an hour, at the start, then again for the latter portion of the fourth and the beginning of the fifth.

Tiafoe, a 24-year-old from Maryland who eliminated 22-time Grand Slam champ Rafael Nadal in the fourth round, played to a sellout crowd of more than 23,000 that included former first lady Michelle Obama, often asking for — and receiving — more noise. No surprise, given he was the first American man in the semifinals at Flushing Meadows in 16 years.

"I feel I let you goys down," Tiafoe said during an unusual chance for a match's loser to address the crowd in an on-court interview. "This one hurts. This one really, really hurts."

Alcaraz, who's from Spain, is popular around the world, widely recognized as a future star of the sport, and he is now the youngest U.S. Open men's finalist from any country since Pete Sampras won the trophy at 19 in 1990.

When Alcaraz went up 2-0 in the fourth, spectators regaled him with a soccer-style song of "Olé, Olé, Olé! Carlos!"

"People love to see that guy play, so they were getting behind him, too," Tiafoe said. "Obviously I would have loved to win tonight, but I think tennis won tonight. I think the crowd got what they expected. I just wish I was the one who got the 'W.'"

Afterward, Alcaraz spoke first in English, then in Spanish, telling his supporters that they helped him fight for "every point, every ball." He tapped his chest as he said this was "for my family, for my team, for me, for all of you."

During the day's first semifinal, which featured a 55-shot point to end the first set, folks called out the winner's last name — "Ruuuuud!" — and it sounded as if they were booing, rather than saluting. Ruud won that lengthy rally and built an early lead and route to beating Karen Khachanov 7-6 (5), 6-2, 5-7, 6-2.

"Towards the end," Ruud, a 23-year-old from Norway, said about the longest point of this U.S. Open, "the pulse was getting very high and the legs were almost shaking."

Either Ruud, the runner-up to Nadal at the French Open in June, will make a six-place jump that represents the biggest move ever to No. 1 or Alcaraz will become the youngest man to get to the ATP's top spot since the computerized rankings began in 1973.

There were so many memorable exchanges and scenes between Tiafoe and Alcaraz. One arrived in the second set's third game, when Alcaraz saved a break point and went on to hold. A smiling Tiafoe jokingly climbed over the net to Alcaraz's side, as if to go shake hands at match's end.

If this semifinal had, indeed, concluded right then and there, no one could have complained about the product. It would proceed for a total of 4 hours, 19 minutes.

They wore matching shirts — red in front, white in back, burgundy on the side — and were every bit each other's equal for lengthy stretches, including until 6-all in the opening tiebreaker.

Alcaraz, who by then already had saved four set points, offered up a fifth by sending a backhand wide, then made converting that one easy for Tiafoe by double-faulting. As the crowd roared, Alcaraz hung his head, walked to his sideline seat and smacked his equipment bag with his racket.

He regrouped and broke to go up in the second set, and a pivotal juncture arrived with Alcaraz serving at 5-3 but facing a break point. He snapped a cross-court forehand winner to erase that chance for Tiafoe, which began a run in which Alcaraz grabbed 11 consecutive points and 19 of 22 to own that set and a 4-0 lead in the third.

As on that forehand, Alcaraz often rips the ball with abandon — and, somehow, with precision, too, aiming for the lines and finding them. He won no fewer than three first-set points with shots that caught the outer edge of the white paint with no margin to spare.

After one, Tiafoe went over for a little light-hearted exchange with Alcaraz's coach, Juan Carlos Ferrero, the 2003 French Open champion who briefly was No. 1 himself. Yet make no mistake: Alcaraz is not some hang-back baseliner. He has a varied, all-court game and showed off his skills by winning points via acrobatic volleys, feathered drop shots and perfectly parabolic lobs.

Other than that lull in the second and third sets, and late in the fifth, Tiafoe was exceptional, too, and having the time of his life all the while. 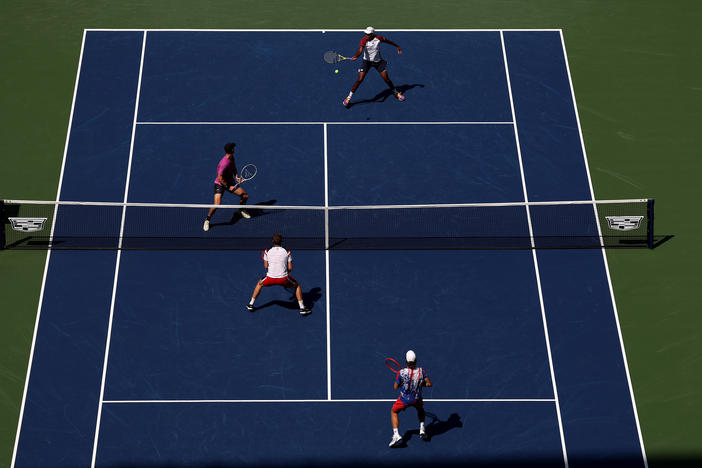 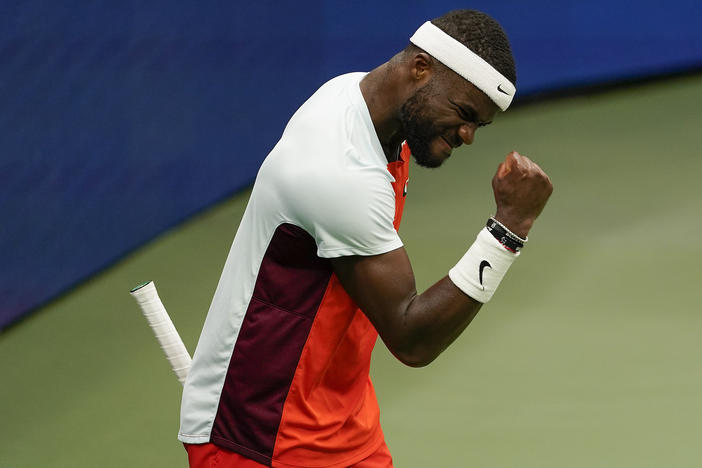 Tiafoe is the first American man to reach the U.S. Open semifinals since 2006

Frances Tiafoe topped Russia's Andrey Rublev 7-6 (3), 7-6 (0), 6-4 behind the backing of a boisterous partisan crowd in Arthur Ashe Stadium on Wednesday. 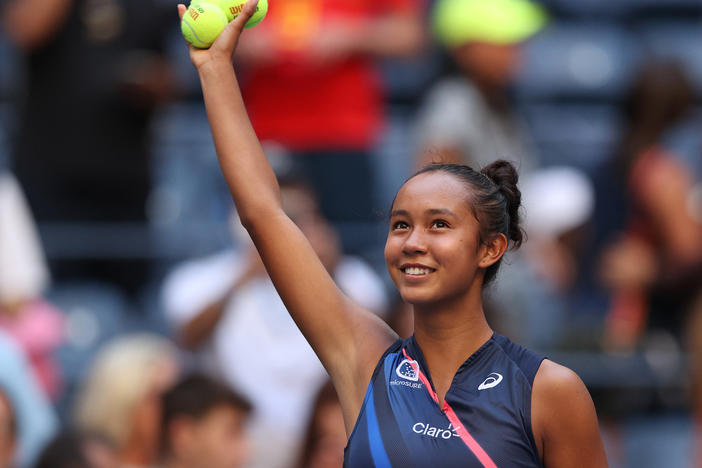