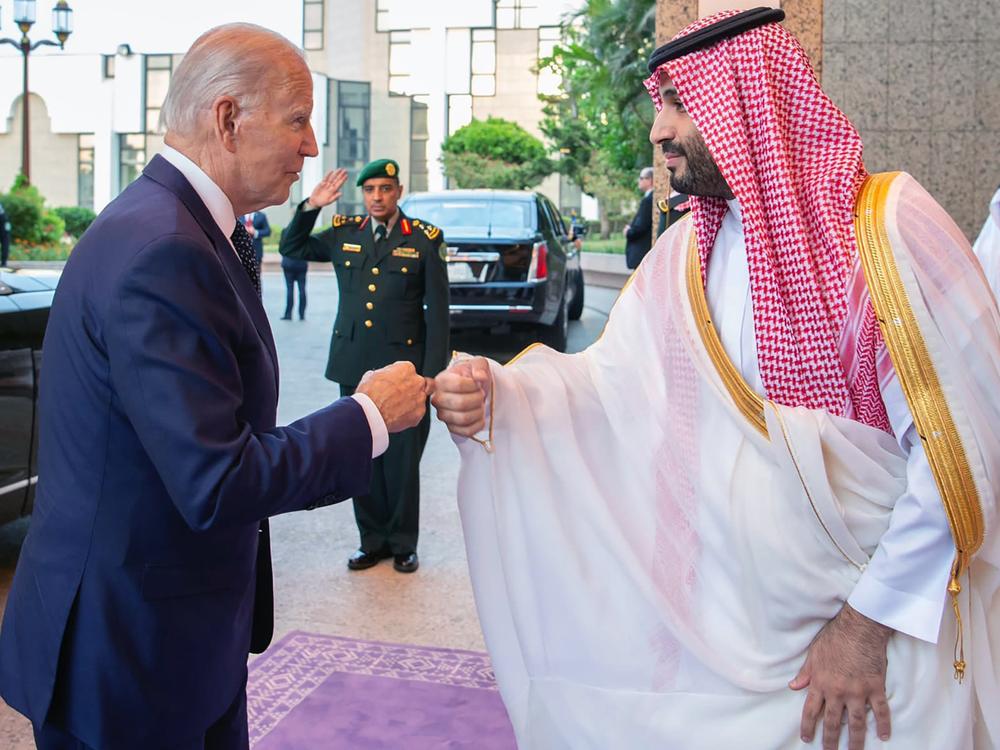 In the end, President Biden went with a fist bump.

The greeting had been a question of intense speculation leading up to the controversial meeting in Saudi Arabia. When running for president, Biden had vowed to treat the country as a "pariah," due to a long string of human rights abuses, including the murder of Washington Post journalist Jamal Khashoggi – a killing in a Saudi operation that U.S. intelligence assessed had been approved by the crown prince.

Biden's greeting happened outside of the presence of U.S. media traveling with Biden. But the kingdom's state media captured video of the greeting, and the Saudi Arabian government was quick to distribute images of it across social media platforms.

Biden and bin Salman both spoke during the brief window that the press was allowed into their meeting, but reporters in the room were not able to hear either man's remarks. And unlike when Biden meets with foreign leaders in most other settings, television and radio reporters were not allowed to carry boom microphones into the meeting to better pick up the audio.

The meeting came together as global oil supplies tightened and prices soared due to Russia's invasion of Ukraine. Biden announced a trip to Saudi Arabia, and the White House swapped out his early "pariah" pledge for the language of diplomatic realism.

Biden also framed his meetings in Israel and Saudi Arabia as part of a broader push for increased stability and peace in the Middle East region.

Still, it was clear the White House was defensive about the optics of Biden greeting and sitting down with the heads of a government he had dismissed during the campaign as "having very little redeeming value."

When White House officials announced that, due to the risk of COVID-19, Biden would limit handshakes during his Middle East trip, it was widely seen as an attempt to side-step what could have been an awkward and enduring image of Biden and bin Salman would shake hands.

On Thursday, Biden was pressed on whether he would raise Khashoggi's death during the meeting, but stopped short of saying he would do so. He said that he always brings up human rights, but said that his "position on Khashoggi is so clear — if anyone doesn't understand it in Saudi Arabia or anywhere else, then they haven't been around for a while."

Biden's national security adviser Jake Sullivan told reporters flying with Biden on Air Force One to Jeddah that the president does not preview the details of what he plans to raise in meetings — but would still push human rights. "You will see him speaking over the next day publicly on the issue of human rights, and he will of course also engage privately on the issue," Sullivan said. 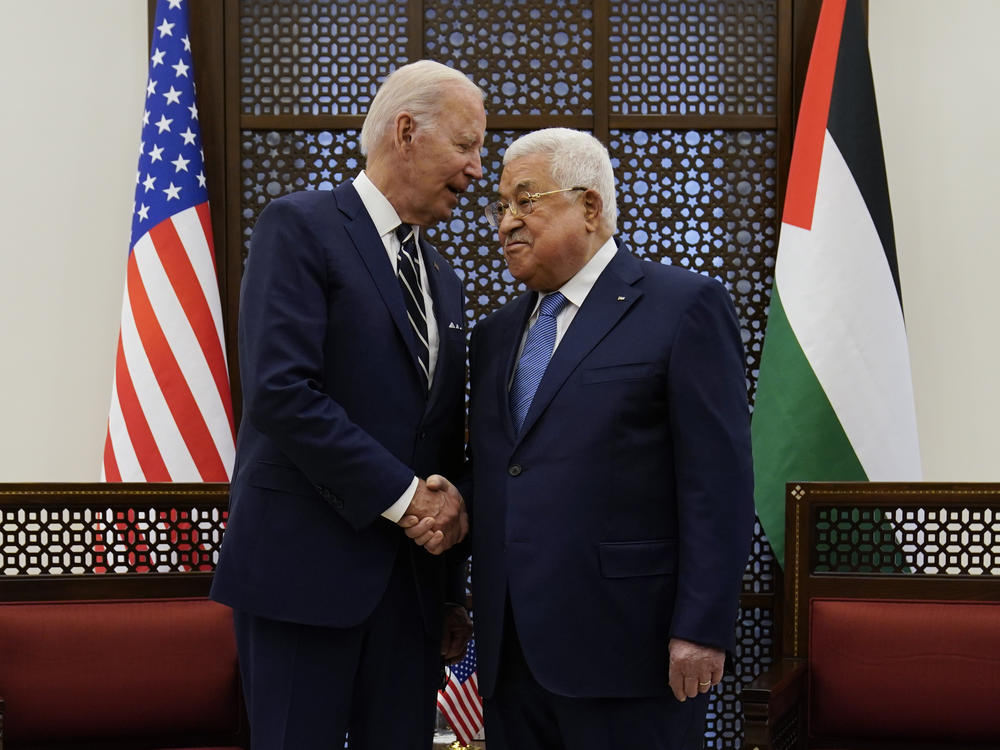 President Biden shakes hands with Palestinian President Mahmoud Abbas after they met in the West Bank town of Bethlehem. / AP 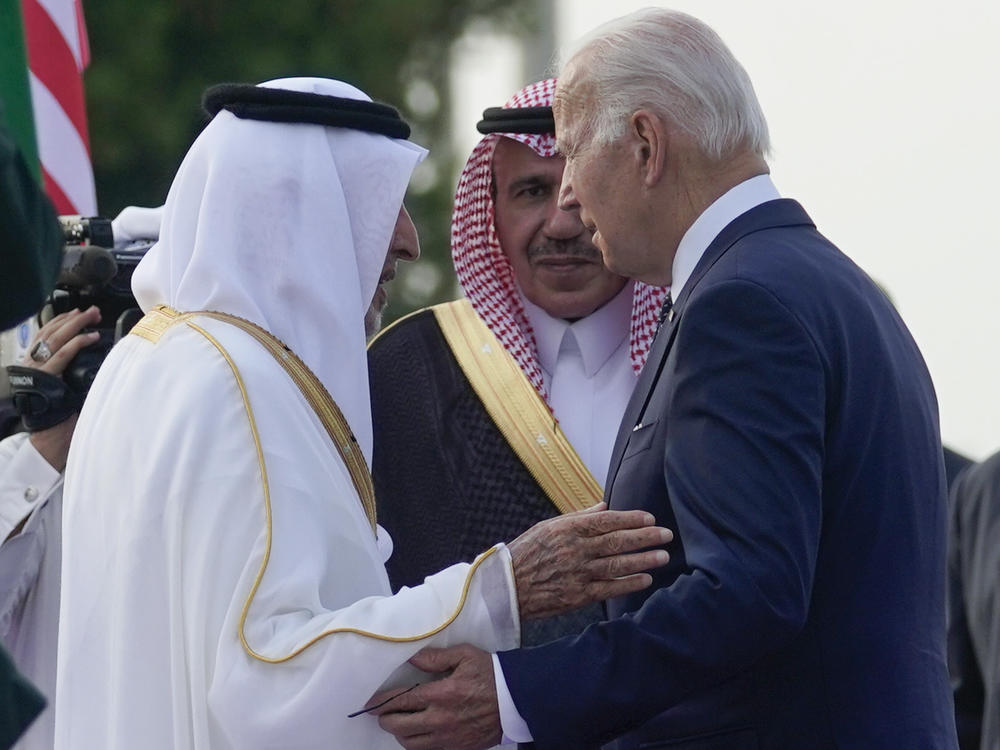 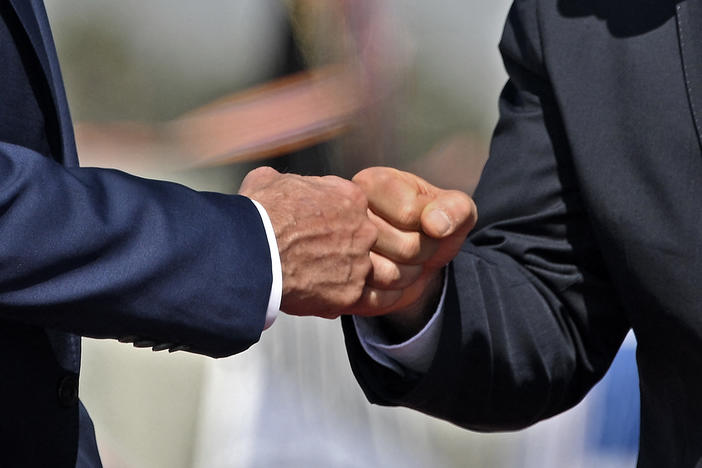 The White House says Biden is trying to limit physical contact during his trip to the Middle East because of COVID risks. But it's a decision that comes conveniently ahead of an awkward meeting.

The White House says Biden is trying to limit physical contact during his trip to the Middle East because of COVID risks. But it's a decision that comes conveniently ahead of an awkward meeting. 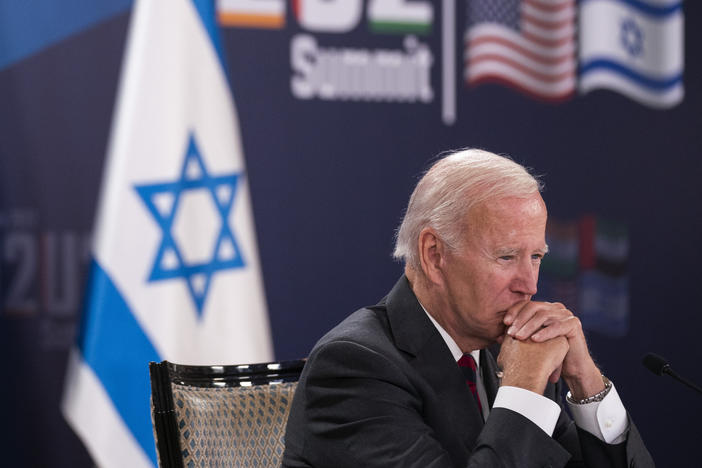 President Biden said "I always bring up human rights" on foreign trips, but stopped short of saying he would raise the 2018 killing of journalist Jamal Khashoggi when he meets Saudi leaders.