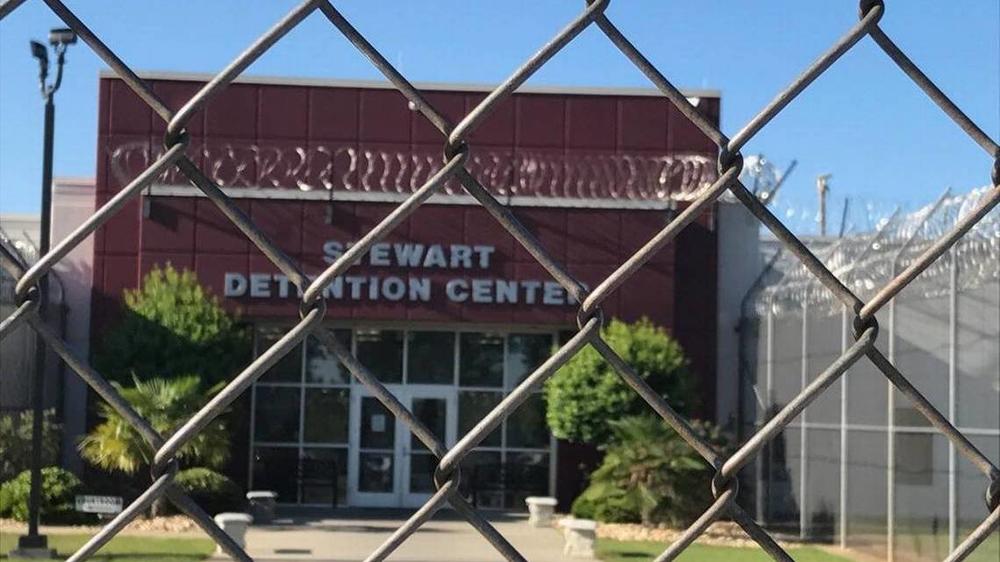 Immigration detainees being held in the Stewart Detention Center in south Georgia have a filed a federal lawsuit against the for-profit company that operates the 2,000-bed facility, citing “deplorable conditions” inside the prison.

Four women allege they were sexually assaulted on multiple occasions by a male nurse at the U.S. Immigration and Customs Enforcement’s Stewart Detention Center in late 2021.

According to a complaint submitted to the Department of Homeland Security’s Office for Civil Rights and Civil Liberties on Tuesday, the nurse isolated women in private medical examination rooms where he forced or coerced them into “giving him access to private parts of their body without medical justification or need and assaulting them.”

While they were in custody, two of the women reported the nurse’s alleged assaults to employees at ICE and CoreCivic, the private contractor that runs the Georgia detention facility about an hour south of Columbus. Officers threatened the women with legal action and longer detention instead of addressing the matter, and the nurse is still treating patients at the facility, according to the complaint.

A representative for CoreCivic told the Ledger-Enquirer that the nurse was cleared of wrongdoing following an investigation into the two reports. The company also denied any claims of retaliation.

Attempts to contact ICE were unsuccessful before publication. In a statement provided to the Ledger-Enquirer on Thursday after this story was published, an ICE spokesperson said two allegations at Stewart remain under investigation, and the agency continues to follow reporting and investigative requirements.

“It is abominable for the administration to have transferred migrant women to the Stewart Detention Center and to continue to keep them there, knowing full well about the history of well-documented egregious abuse at this ICE prison,” Project South Legal & Advocacy Director Azadeh Shahshahani told the Ledger-Enquirer.

“It is high time for Stewart to be shut down and for all detained migrants to be released.”

The complaint identifies the four women as Maria Doe, Viviana Doe, Laura Doe and Marta Doe, and the document does not name the male nurse.

Each alleges they were assaulted by the nurse in late 2021.

Maria Doe alleges she was assaulted Dec. 31, 2021, a day after arriving at Stewart. According to the complaint, the nurse groped Maria’s breasts multiple times under the guise of listening to her heart. He also allegedly put his penis in her hand and touched her inappropriately throughout an exam.

She told him multiple times to stop and asked to leave the room. Maria reported the incident, but she alleges she was threatened with retaliation. She was accused of lying and told that she would serve seven years in prison if she continued pursuing her report.

Officers withheld food during interviews, and over the course of a week, Maria was subjected to repeated interrogations. She was told that she would not be released from ICE custody until she withdrew her report.

She was released from Stewart on Jan. 11, and Maria never received any updates regarding her report or an investigation into the nurse.

“I was shaking, I was scared, I wanted to leave,” Maria told The Intercept, a nonprofit online news outlet that first reported the complaint. “It was the worst day of my life.”

Viviana Doe was held at Stewart for three months near the end of 2021, and she alleges having two “disturbing encounters” with the nurse.

The first occurred when Viviana needed a steroid shot in the buttocks. Viviana requested a female provider, and the male nurse attempted to deny her request. A female nurse eventually gave the shot, according to the complaint.

A few weeks later, the male nurse took Viviana to a room for a medical check after she had an offsite eye appointment. The nurse asked Viviana to lift her shirt up to her neck so he could place his stethoscope on her chest.

The nurse also placed the stethoscope below Viviana’s waistline without explaining what he was doing or asking for consent, according to the complaint.

Viviana told the women in her unit about what happened but did not file a report because she was afraid of any effects it may have on her detention or her immigration case, the complaint alleges.

Laura Doe alleges she was assaulted twice by the male nurse during her six month stay in 2021 and 2022, according to the complaint.

The first took place in September 2021 when the nurse touched her in between and around her breasts with a stethoscope and his fingers during an exam. He also touched Laura with his hands and stethoscope under her waistline and over her uterus area.

He also asked Laura to remove her right sock and shoe before giving her a “weird massage.” The nurse allegedly looked at Laura in a sexually suggestive manner that made her uncomfortable.

The second alleged assault took place around late November or early December 2021, when Laura requested a urine and blood test because she had abdominal pain and believed she may have had an infection. She alleges the nurse again inappropriately touched her chest and under her pants, according to the complaint.

Laura reported the assaults in January after speaking with a mental health professional and at the urging of a facility official. Another woman overheard the conversation and also filed a report against the nurse.

After filing, a man and woman who worked at the facility told Laura she could face seven years in prison for lying and accused her of instigating other women, according to the complaint. Laura was released in January, and she’s received no update regarding her report.

Marta Doe alleges the nurse committed sexual misconduct on three occasion when she was detained at Stewart from September 2021 to November 2021.

The first took place when the nurse had Marta remove her bra when she came to the medical unit for chest pain. He placed his stethoscope on her bare chest.

During another visit, the male nurse attempted to give Marta an unnecessary enema because she had stomach pain. A female nurse stopped him, according to the complaint.

The third occurred when the nurse treated Marta after she fell and hurt her wrist. The nurse asked if Marta’s knees hurt and attempted to get her to take off her pants. Marta refused, and she was released from Stewart shortly after the incident.

An ICE spokesperson and CoreCivic spokesperson Matthew Davio both told the Ledger-Enquirer they maintain a zero-tolerance policy for all forms of sexual abuse.

“Two of the four women made their allegations while in our care, and investigations determined one woman’s claim was ‘unsubstantiated,’ and the other was ‘unfounded.’ We have very little information regarding the claims made by the other two women, but will investigate them thoroughly if and when we receive that information," Davio said.

“The employee was placed on administrative leave until the investigations were completed and facts determined, as is standard practice. There have been no allegations against the individual before or since. As he was cleared of all allegations, the nurse is still in our employ,” he added.

Davio added that the two women who reported the sexual abuse were “offered appropriate medical and mental health services, emotional support services, and answers to any questions they had about the investigative process.”

Women first arrived at the Stewart Detention Center in December 2020 — months after reports emerged that a gynecologist performed unnecessary or unwanted medical procedures, including hysterectomies, on women held at the Irwin County Detention Center in Ocilla, Georgia.

The Intercept reports that at least 17 sexual assault allegations were made in the 11-month period between May 2021 and May 2022. Eleven of those reports allege abuse by facility staff.

As of June 13, the average daily population at Stewart is 1,092 people, according to data maintained by Syracuse University’s Transactional Records Access Clearinghouse. 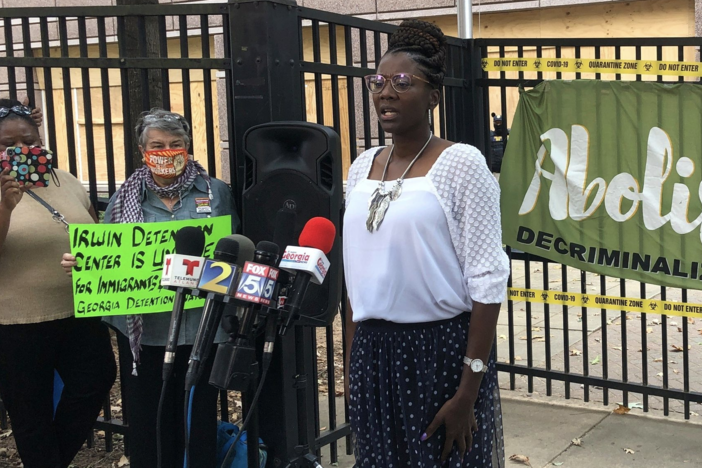 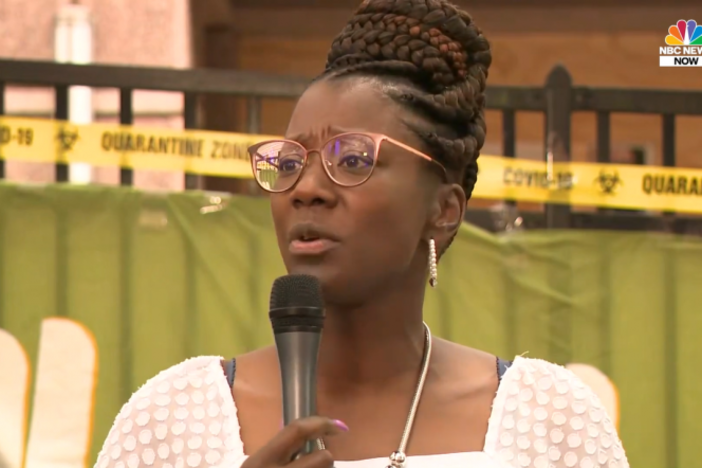 Top U.S. House Democrats are investigating a whistleblower’s allegations that immigrant women in a Georgia detention center endured gynecological procedures without their consent or full understanding of the treatment that was being performed.