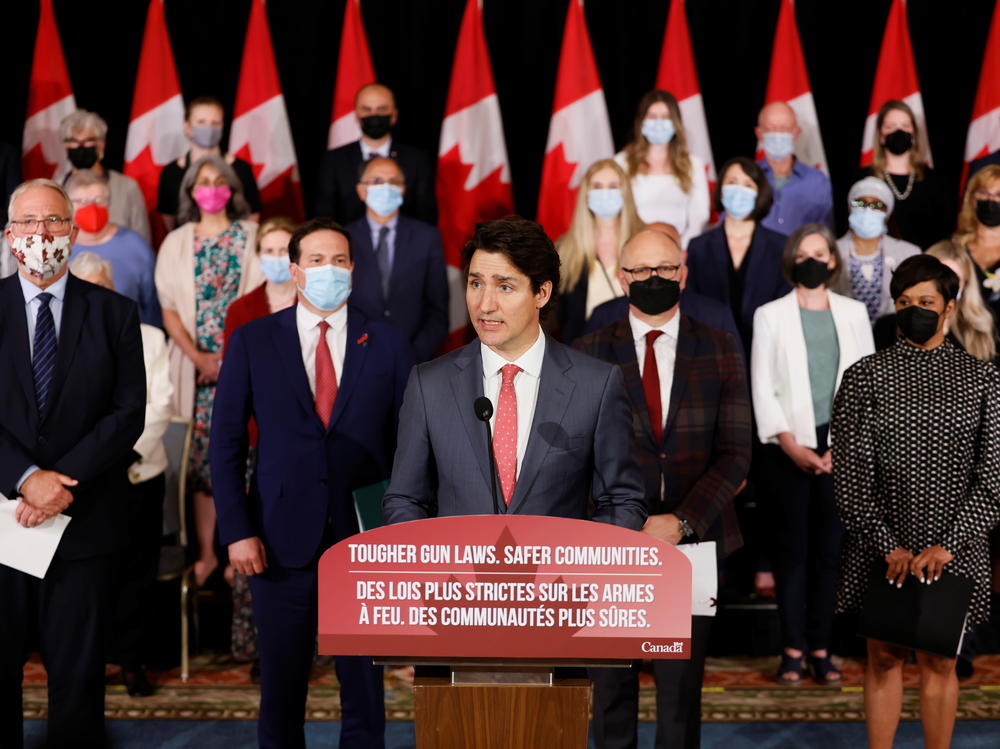 Canada's Prime Minister Justin Trudeau, with government officials and gun control advocates, speaks at a news conference on May 30 about firearm-control legislation that was tabled in the House of Commons in Ottawa, Ontario, Canada. / Reuters

TORONTO, Canada — A few weeks ago, the Rev. Sky Starr led a funeral in northwest Toronto for a 24-year-old shooting victim. Among the mourners, she noticed a young man.

"I saw this youth was kneeling at the casket, he was praying," Starr recalls. The next morning, she received a call letting her know the same young mourner was dead. He'd been shot and killed overnight.

Canada's 2019 rate of violent deaths by firearms of 0.5 per 100,000 people was an eighth of that in the U.S. But shootings have been trending upward since 2014. Many homicides, particularly those committed with handguns, are concentrated in low-income neighborhoods like Jane and Finch, in Toronto, where Starr counsels families of gun victims.

In Canada, weapons are federally regulated. Unlike in the U.S., gun ownership is not a constitutional right. Since 2020, when Canada's deadliest mass shooting occurred, the government of Prime Minister Justin Trudeau has enacted a series of anti-gun violence measures, including legislation banning 1,500 models of assault-style firearms.

The latest gun control bill, known as Bill C-21, introduced at the end of May, proposes to limit the domestic handgun supply by freezing new sales and transfers. The legislation is currently under consideration in committee in Canada's House of Commons.

It also notably increases penalties for smuggling firearms — one of the country's most difficult challenges, as it tries to address weapons trafficking across its border from the United States. 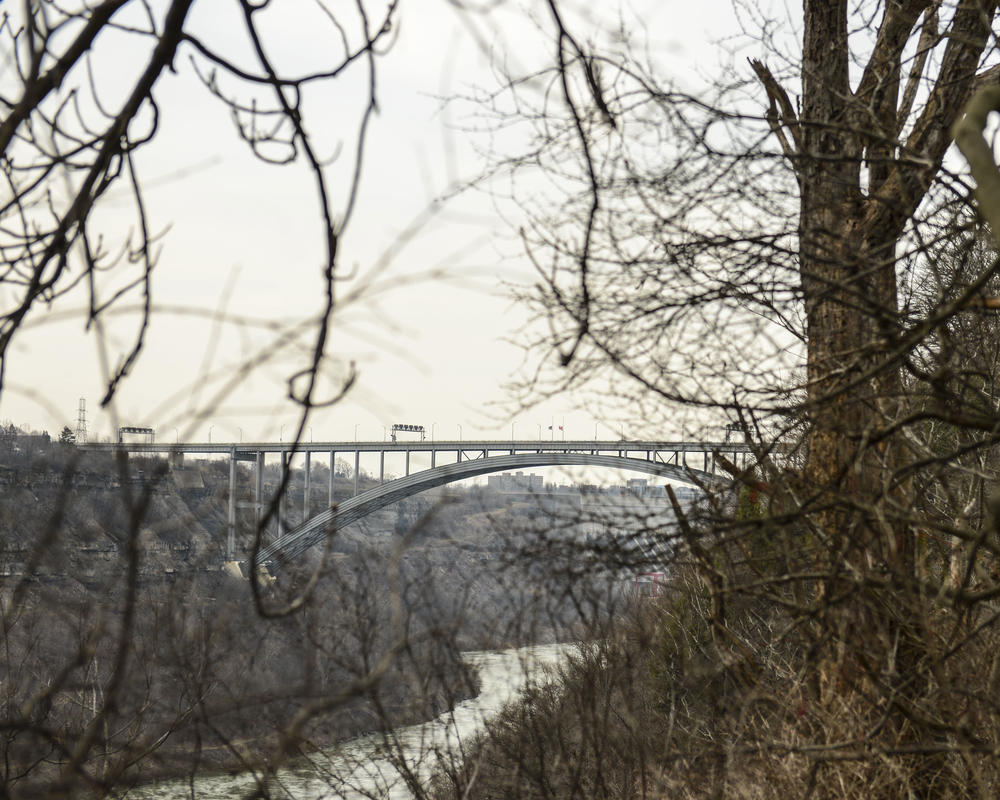 Traffic crosses the U.S.-Canadian border over the Queenston-Lewiston Bridge, looking from the Canadian side. / Toronto Star via Getty Images

U.S.-sourced weapons have been used in crimes across Canada

Benoit Dubé, head of an interagency gun violence task force in the province of Quebec called Operation Centaur, told the parliamentary committee that most weapons seized in relation to crimes in Quebec also came from the U.S.

"We need to focus our efforts on the borders between the United States and Canada," Dubé testified.

"The laws in many states, very near the border, are quite porous, easy to circumvent, if you want to possess a gun and then reroute it into the illicit market," says Jooyoung Lee, a University of Toronto sociologist who studies gun violence.

The perpetrator of the 2020 mass shooting killed 22 people over a 13-hour period in Nova Scotia. He had smuggled three of his weapons from Maine in the back of his pickup truck.

In April, police in southern Ontario recovered a drone stuck in a tree carrying 11 handguns. But smugglers more frequently ferry weapons in vehicles like trucks or boats.

However, it's not just illicit markets that are the problem. Vancouver Police Staff Sgt. Michael Rowe testified that concern also extends to firearm parts, such as Glock barrels and slides, which he said can be shipped to Canada legally.

"These parts are being used to manufacture the untraceable ghost guns that we see being used in our gang conflicts," Rowe said.

With shootings rising, advocates want to step up violence prevention

When it comes to gun violence in Canada, "We're nowhere near the volume that there is south of the border," says Jeremy Grushka, a trauma surgeon at McGill University Hospital in Montreal who is a member of the advocacy group Canadian Doctors for Protection from Guns.

Nevertheless, he warns that gun violence in Canada is "a massive public health crisis" with lasting repercussions.

The Toronto Police Service has reported 201 shootings this year through June, up 15% from the same time last year. Homicides have risen by 29%.

While Lee, the sociologist, praises Canada's newest gun control bill for attempting to strengthen border enforcement, he says, "I'm also of the belief that crime prevention is something that is quite overlooked."

More resources could support prevention efforts in areas where handgun violence occurs most, Lee says, among "racially marginalized, underserved communities. And so that would mean investing in those places, supporting young people — it tends to be young men who are at the greatest risk of being an offender or a victim in a shooting — so that they don't go down that path." 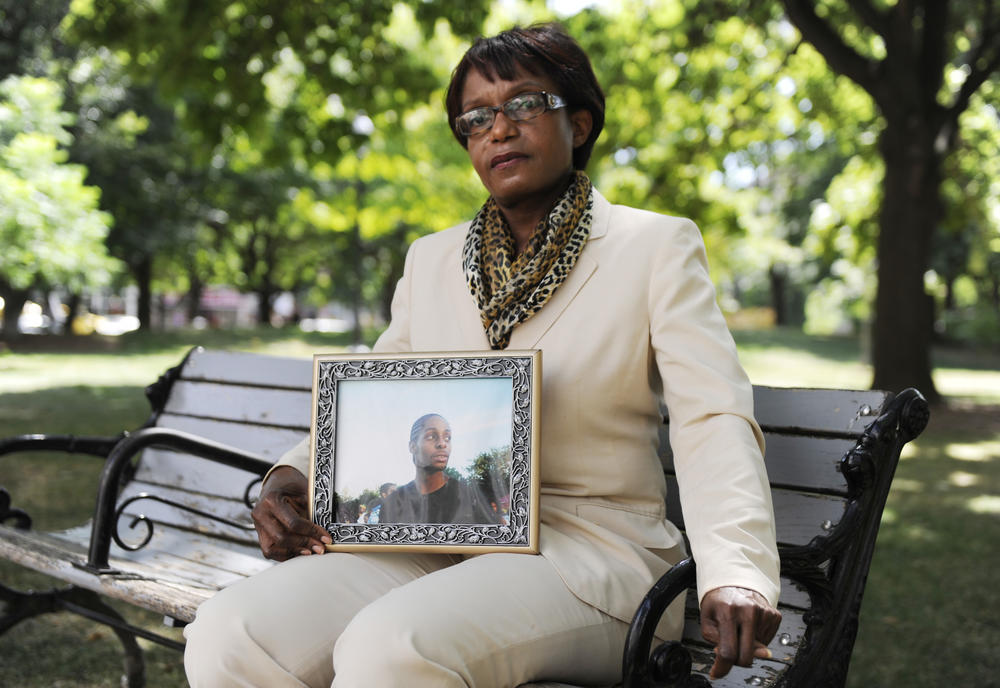 Audette Shephard holds a photo of her son Justin, who was fatally shot in 2001 at the age of 19. / Toronto Star via Getty Images

Programs intervening with young people most likely to become involved with gun violence were precisely those disrupted by the pandemic, says Audette Shephard. The Toronto mother became an anti-violence advocate after her 19-year-old son Justin was shot and killed in 2001.

When the pandemic began, Shephard says, "A lot of young people basically were kind of just left on their own."

Despite the challenges presented by weapons circulating illegally, gun control advocates insist there's plenty that Canada should do legislatively to address gun violence.

"U.S. guns don't just kill Americans, they kill Canadians as well. However, there are things that we can do in spite of that, and that's really what we've had to focus on," says Wendy Cukier, president of the Coalition for Gun Control, a Canadian nonprofit that has lobbied for gun legislation, including a handgun ban. 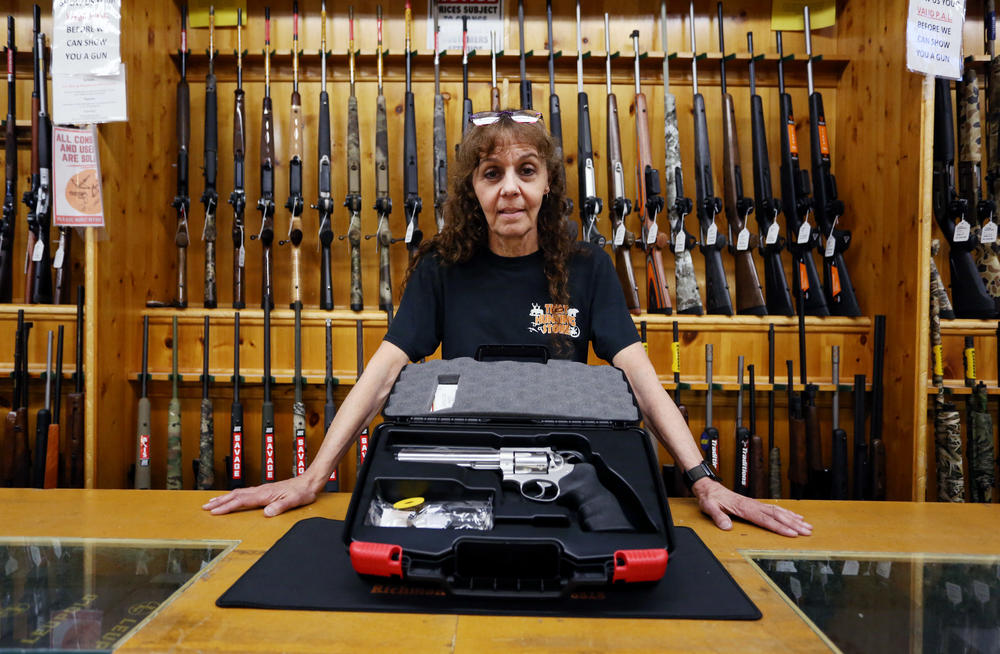 Jen Lavigne, co-owner of That Hunting Store, with a Ruger GP100, on June 3, in Ottawa, Canada. Canadians rushed to buy handguns after Prime Minister Justin Trudeau announced on May 30 a proposed freeze on sales in the wake of recent mass shootings in the U.S. "Sales have been brisk," said Lavigne. / AFP via Getty Images

Guns involved in Canadian incidents of intimate partner violence and suicides are primarily sourced in Canada, she notes. The newest proposed legislation also includes red flag provisions and measures to revoke gun licenses for individuals who have engaged in domestic violence or stalking. And with the exception of the Nova Scotia tragedy, she says Canada's mass shootings have overwhelmingly involved guns owned legally or diverted from gun owners in Canada, not the U.S. She and other activists welcome government action targeting those weapons.

"Guns are coming across the border illegally from the United States, but taking the handguns out of the domestic supply will definitely help in Canada. It's just that simple," says Ken Price, whose daughter, Samantha, was injured in a mass shooting in Toronto's busy Danforth neighborhood in July 2018. Fifteen people were shot, of whom two died. The perpetrator's handgun turned out to have been stolen from a shop in another province.

Government action like freezing handgun sales, Price hopes, will prevent Canada from ever approaching the number of mass shootings in the United States, "which was already offensive, and shocking, and frightening, quite frankly, you know, as a permanent state and society." 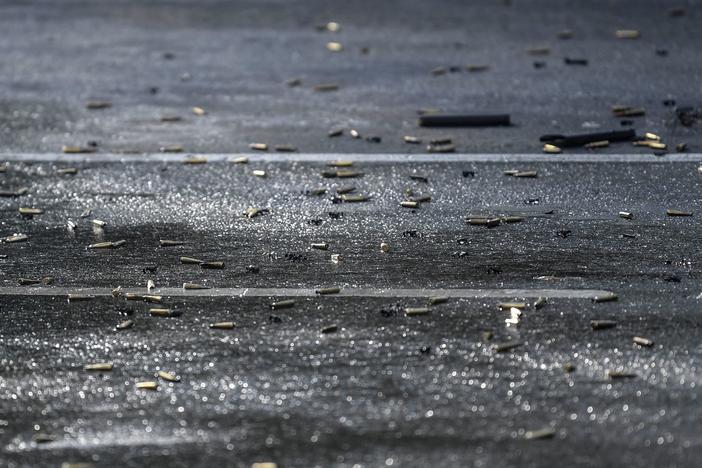 Mexico's Suit Against U.S. Gun Companies May Seek More Than A Court Win

The Mexican government sued U.S. gun-makers and distributors in federal court for damages caused by illicit firearms. Experts say it's a long shot but the move could ramp up pressure on the U.S. 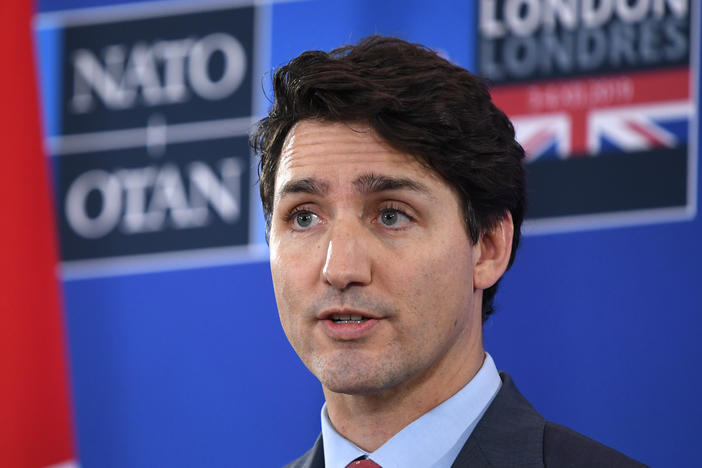 It's also now forbidden to bring newly acquired handguns into the country. "We have seen too many examples of horrific tragedies involving firearms," the Canadian prime minister said. 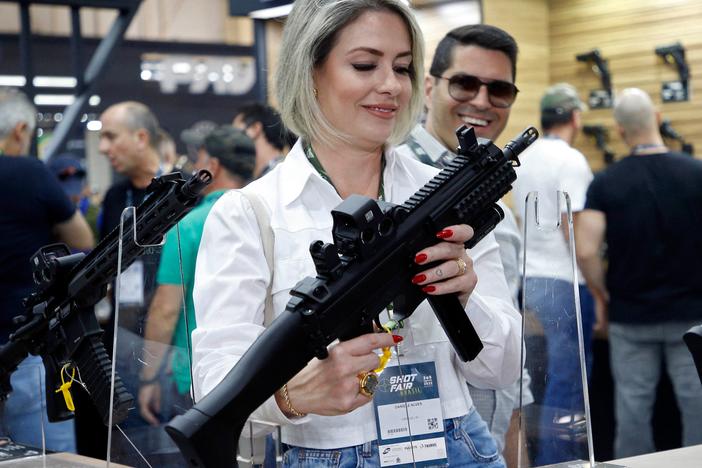 Brazilian President Jair Bolsonaro has issued more than a dozen decrees in favor of Brazilians' right to bear arms. Sales have spiked and gun shops and shooting ranges have opened up all over Brazil.