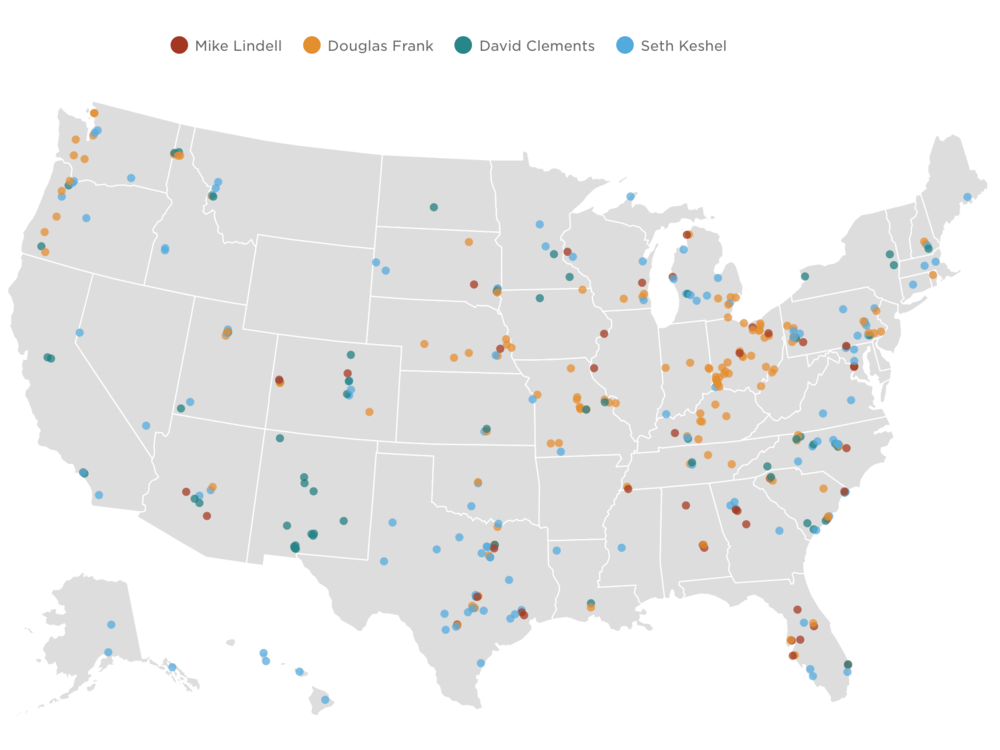 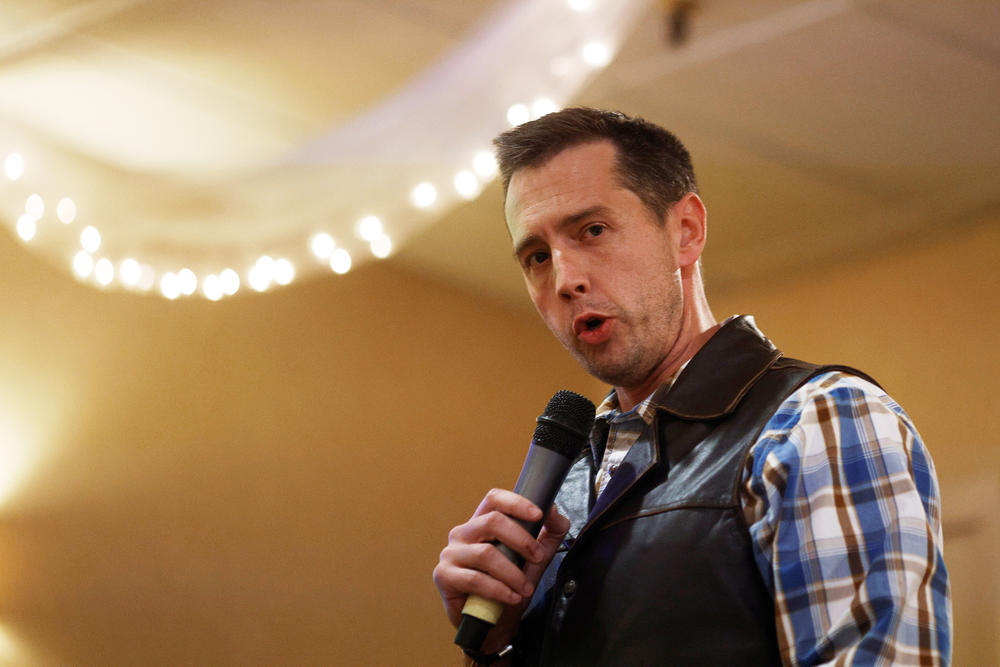 On a quiet Tuesday night in Howard County, Md., dozens of people gather in a community center and listen to Seth Keshel's 10-point plan.

"Captain K," as he's known in election fraud circles, is a former U.S. Army intelligence officer, and he is walking through his go-to presentation: comparisons of vote totals from the past few election cycles, which he falsely claims prove President Biden's win in 2020 was illegitimate. His 10-point plan to "true election integrity" includes banning all early voting and requiring all American voters to re-register.

The next night, more than a thousand miles away in Minneapolis, in a small building across from a popular garden shop, roughly 60 people wait for David Clements to take the stage.

Clements, professorial in a tan blazer with a graying beard and unruly curly hair, begins his presentation with a prayer. Then he goes to the slideshow.

The audience, which appears to be all white and mostly middle-aged, occasionally gasps as he shows charts and graphs, which he claims contain evidence of widespread election fraud.

Clements ends his talk with a request to the people in the audience: Go to the offices of your local officials.

"They respond to fear," he says. "You need to hold these institutions with the contempt they deserve."

An NPR investigation found that since Jan. 6, 2021, the election denial movement has moved from Donald Trump's tweets to hundreds of community events like these — in restaurants, car dealerships and churches — led by a core group of election conspiracy influencers like Keshel and Clements.

These local gatherings may reach fewer people than viral internet posts, but they seem to effectively spur action by regular people, who are motivated by their almost evangelical intimacy.

"It's this constellation of election conspiracy theorists," said Chris Krebs, a former Department of Homeland Security official who oversaw the federal government's election security efforts in 2020. "You can see the complexion of local politics shifting as a result. They have decentralized post-January 6th and are really trying to effect change at the lowest-possible level."

NPR monitored the election-denial influencers through events advertised on their public social media accounts, the websites and social media accounts of local organizations, events NPR attended, video footage and news reports over the past 18 months. Four prominent purveyors of voting misinformation stood out, crisscrossing the country to appear at at least 308 events in 45 states and the District of Columbia.

NPR tracked Keshel and Clements, as well as Douglas Frank, who misleadingly claims to have discovered a secret algorithm that swings vote totals across the U.S. (his methodology has been widely debunked by voting experts), and MyPillow CEO Mike Lindell.

The scale of their movements paints a portrait of an election denial movement that has evolved into a nationwide force, beyond just swing states — and despite the Jan. 6 Committee's investigation and efforts by voting officials at every level to combat disinformation. NPR's investigation is the first such effort to document the scope of these influencers.

"It's an existential threat to American democracy," said Franita Tolson, an elections expert at the University of Southern California. "If the numbers get big enough, it's unclear whether we will survive it."

Carly Koppes, who runs elections in Weld County, Colo., says she noticed a tone shift in her county after Douglas Frank came to town.

She's reading over an email that just came in from one of her voters.

"Traitors will be exposed. These guys are going down and you have no chance..." She trails off as she scans. "You deserve everything coming your direction."

Last summer, a group of suspicious citizens here knocked on thousands of doors looking to uncover evidence of election fraud.

"It started because of Dr. Frank and his really bad data analysis," Koppes said. "Him and his people, unfortunately, just don't know how to read election records correctly." 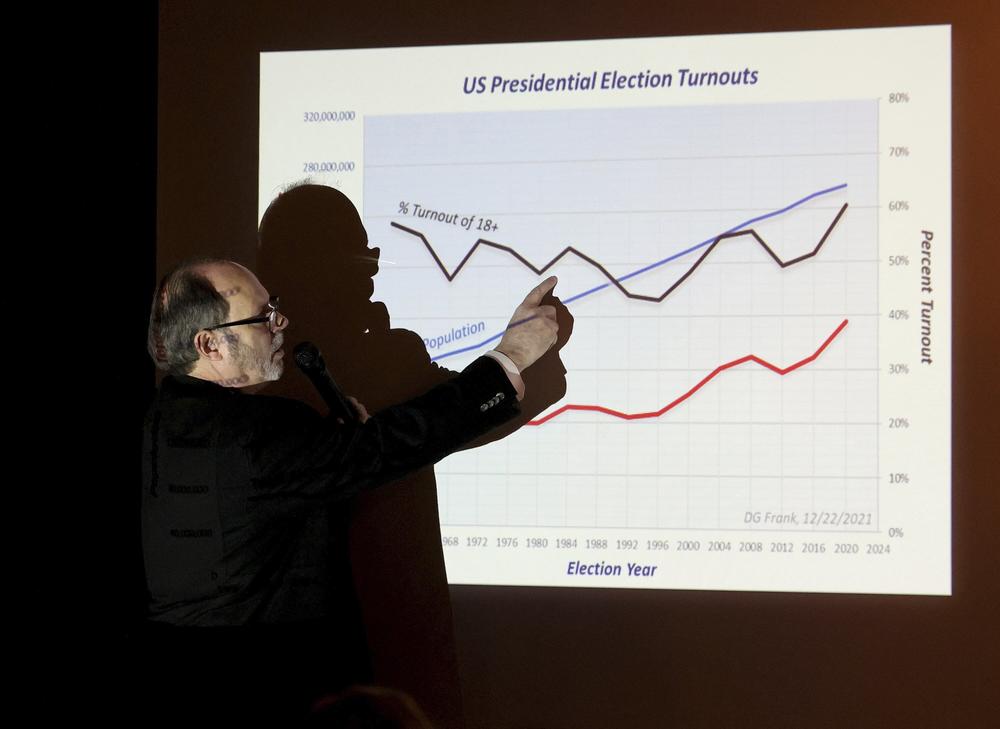 Douglas Frank, a former high school math and science teacher from Ohio, gives a presentation to about 100 people in the Missouri Capitol rotunda on his theories about election fraud, on Jan. 6, in Jefferson City, Mo. Frank, whose ideas have been debunked, claims to have discovered secret algorithms that were used to rig the 2020 election in favor of President Biden. / St. Louis Post-Dispatch via AP

He, and the other three men whose movements NPR documented, either did not respond to requests for comment or declined to comment for this story.

In the visit Koppes mentioned, on April 24, 2021, Frank held court in a DoubleTree hotel conference room near Denver. Dozens of people cheered as Frank pointed at graphs that he claimed showed how the 2020 election was marred by fraud (something that's been debunked many times by hand counts, audits and investigative reports across the country).

And many people in this Colorado community listened.

A group popped up there, dedicated to this sort of fraud-motivated canvassing, and they devoted their organizing playbook to Frank.

Jim Gilchrist, a doctor of holistic medicine in Colorado, saw an online posting of Frank's talk and volunteered to canvass with the group. He estimates he spent more than 20 hours last summer knocking on doors.

"I just kind of wished there was some mechanism for there to be a more transparent kind of way of making sure the vote was counted correctly," Gilchrist said in an interview with NPR. "Douglas Frank kind of offered a solution that we could do as citizens."

NPR found that over the past year and a half, the men met or appeared with at least 78 elected officials at the federal, state and local levels — many of whom will have a role in how future elections are run and certified.

At least two secretaries of state, two U.S. senators, 10 U.S. representatives, two state attorneys general and two lieutenant governors met or appeared with the figures NPR tracked. More than three dozen members of state legislatures, many of whom have introduced legislation in their states that would affect how Americans cast ballots, have also appeared at events with them.

"Our voices have gotten bigger and bigger every single day since last year and you cannot stop that," said Mike Lindell, at a rally in January of 2022 attended by three members of Arizona's congressional delegation, Debbie Lesko, Andy Biggs, and Paul Gosar, all of whom voted not to certify Arizona's election results at the U.S. Capitol a year earlier. "We will get our country back." 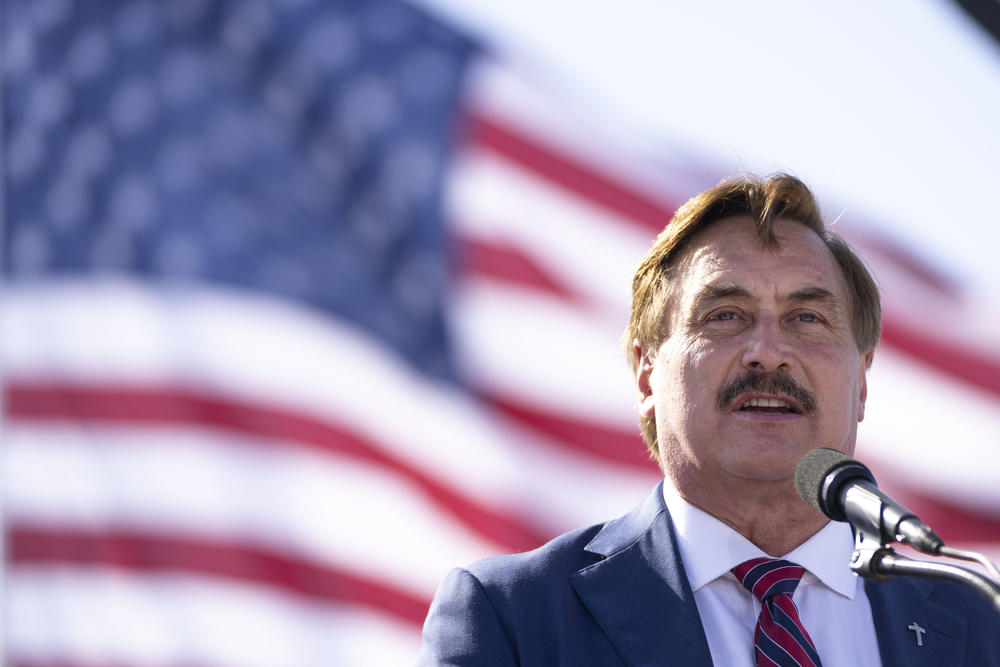 Mike Lindell, political activist and CEO of MyPillow, speaks during a rally hosted by former President Donald Trump at the Delaware County Fairgrounds on April 23 in Delaware, Ohio. / Getty Images

In some cases, the election denial influencers worked to persuade skeptical officials to embrace their claims.

In May 2021, Frank met with staff from the Ohio secretary of state's office for more than two hours.

NPR acquired audio of the meeting, which was first reported by The Washington Post, through a public records request.

The staffers in the meeting pushed back on Frank's many fraud accusations, and at one point he responded by threatening to send unauthorized people, or "plants" as he put it, into local voting offices.

"We have plants everywhere that go into buildings when your machines are on and capture your IP addresses. We have those, not necessarily in Ohio but we can arrange for that," Frank said, his voice rising. "So all I'm trying to point out to you is that this is coming. Be ready. And I'm not trying to fight you — do you see that I'm trying to help you?"

The staffers in that meeting didn't budge. But shortly after that meeting, someone did attempt to breach an elections network in Lake County, Ohio, though a state official told NPR that no sensitive data was ultimately accessed.

The four election denialists also appeared with well over 100 candidates for local, state and federal office in the 2022 primaries. Some, including U.S. Rep. Mary Miller of Illinois and state Sen. Doug Mastriano, who is running to be governor of Pennsylvania, have already won their party's nomination for the general election.

The highest profile of the group that NPR tracked is MyPillow CEO Lindell, a prominent and longtime Trump supporter.

Lindell says he has spent millions of dollars on his crusade, which started almost as soon as ballots were cast on Nov. 3, 2020. Sometime around March of 2021, he brought Frank into the fold and Frank's popularity skyrocketed.

"I went from being completely mum to suddenly 10 million people knowing me in about a week," he told a group in Utah last July. 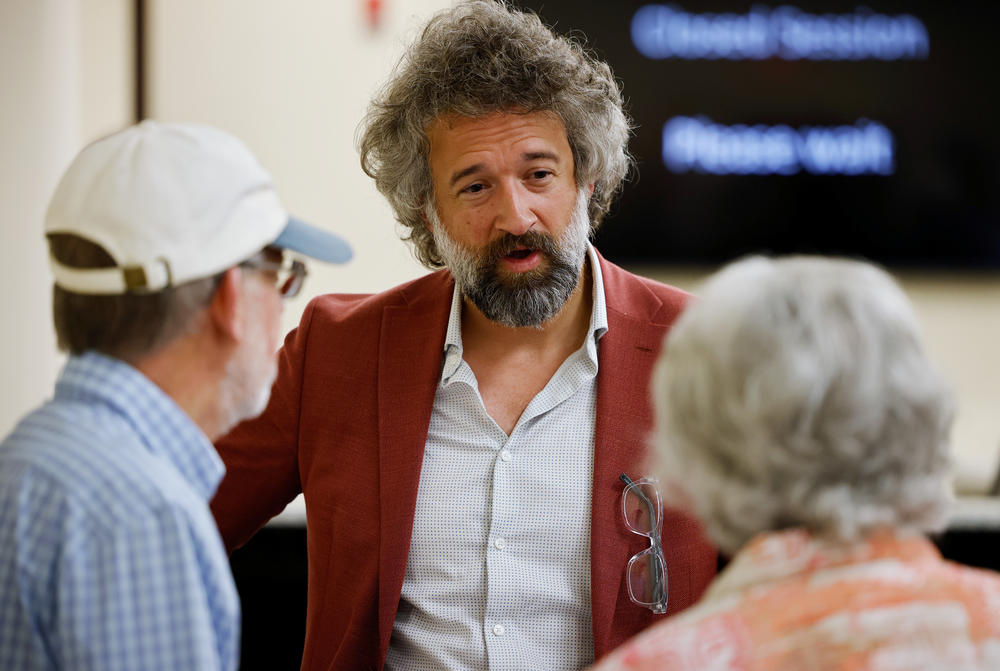 David Clements talks to audience members after speaking to the Surry County board of commissioners during a presentation by several individuals that aimed to cast doubt on election integrity, urging the commission to replace existing voting machines with purely paper ballots in Dobson, N.C., on May 16. / Reuters

Frank often speaks at events with Keshel and Clements. Clements is a lawyer and former professor at the New Mexico State University business school who was fired for not complying with the school's COVID-19 policies. Keshel is a retired Army captain and veteran of Afghanistan.

While those in the group often repeat talking points and appear together, they don't necessarily coordinate appearances or strategy. And other than Lindell, they were mostly unknown before 2020. Now they're influencers in the movement with online followings of hundreds of thousands of people. They even promote merchandise like T-shirts, books and body lotions, along with their election misinformation.

Michigan Secretary of State Jocelyn Benson, a Democrat, says they're using election fraud as a vehicle to advance themselves.

"There's no shortage of ability to access the truth about our election system, yet there seems to be a proliferation of people willing to lie about it," Benson said. "I think it's logical to conclude that they know better. And that they're knowingly spreading misinformation ... to win elections, to raise money, to gain attention and celebrity."

Benson says her office has seen a direct correlation between election denier events in Michigan and a rise in harassment toward voting officials.

"Whenever there is an appearance in which the former president or Lindell or others come out attacking our system we know to expect an uptick in threats and add additional security as a result," she said.

But she, and the thousands of other Americans in charge of elections nationwide, have yet to figure out a truly effective way to fight back and break through to the two-thirds of Republican voters who believe voter fraud helped Joe Biden win the 2020 election.

That's because election denialism has grown from a political movement into something almost religious, said Koppes, the Republican county clerk in Colorado. 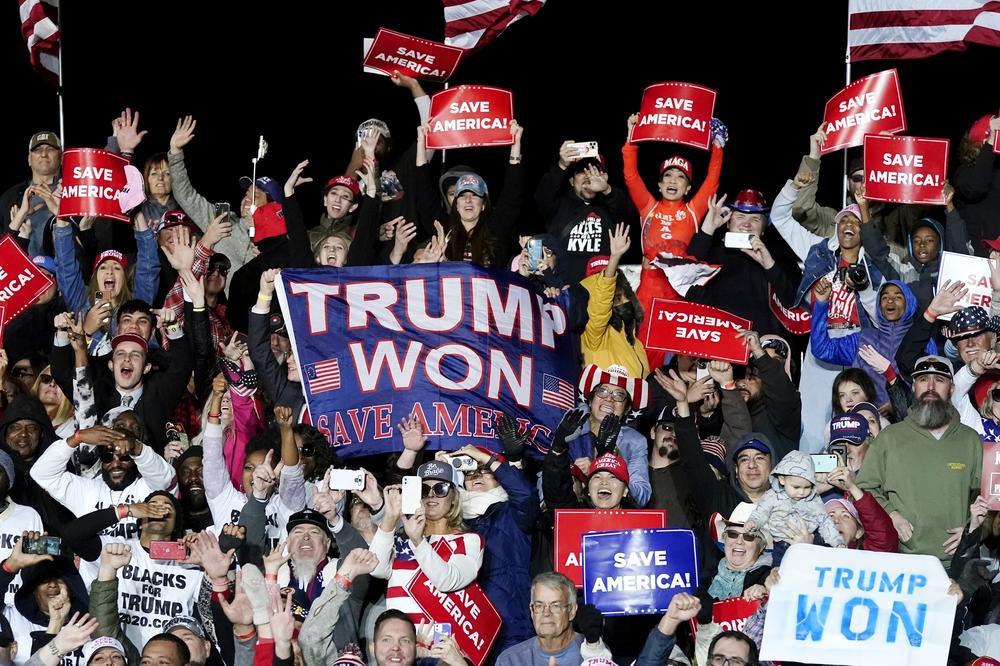 Between conversations with voters and research on all the separate false claims that have popped up over the past two years, she estimates she's spent thousands of hours dealing with the fallout of Donald Trump's misinformation campaign.

At this point, she says she's had to stop engaging with voters who are unwilling to listen to her.

"Some of these people really, truly believe they're doing the Lord's work," Koppes said. "But I think at the end of the day, they so desperately want to believe what they're being fed, that they're using all means to justify what they're doing." 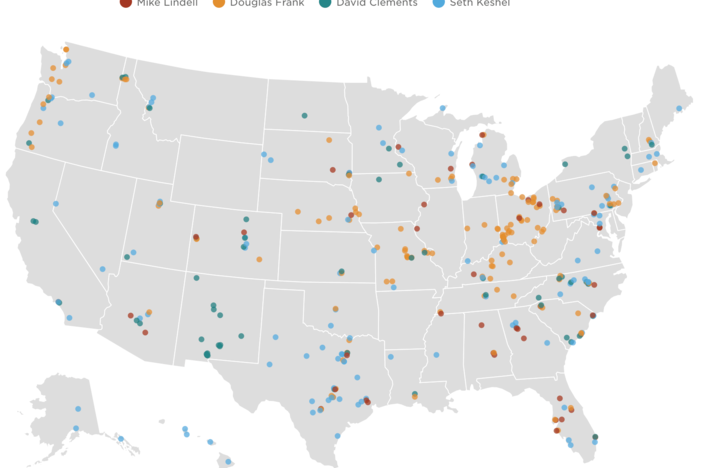 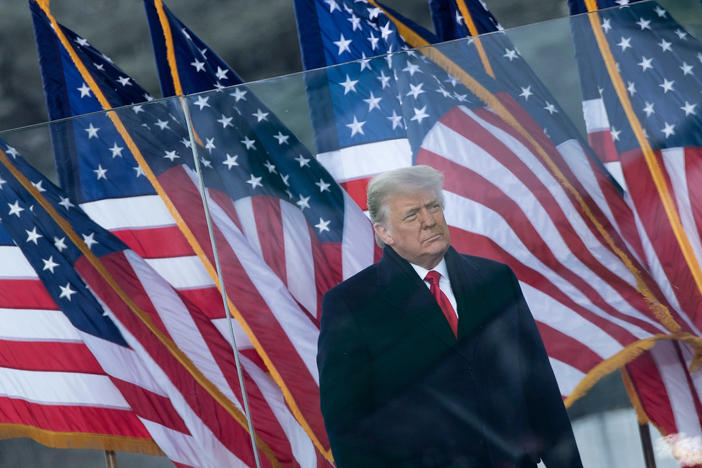 A judge ordered lawyer and Trump ally John Eastman to give records to Congress' Jan. 6 committee, saying that Trump and Eastman's plan amounted to a "coup in search of legal theory" on Jan. 6. 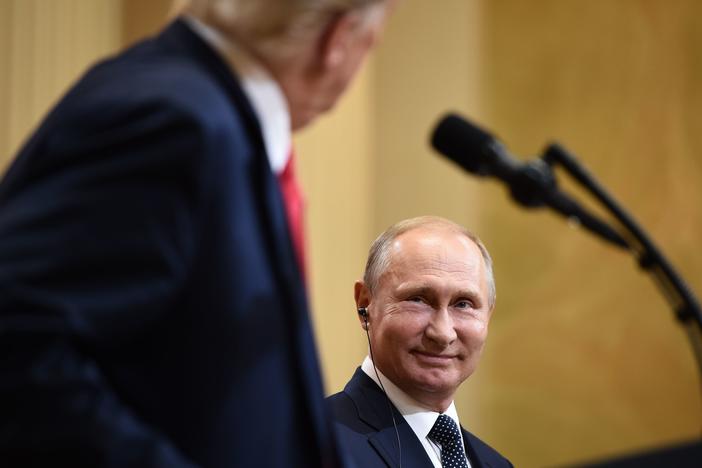