Trump's legal exposure may be growing – and 4 other takeaways from the Jan. 6 hearing 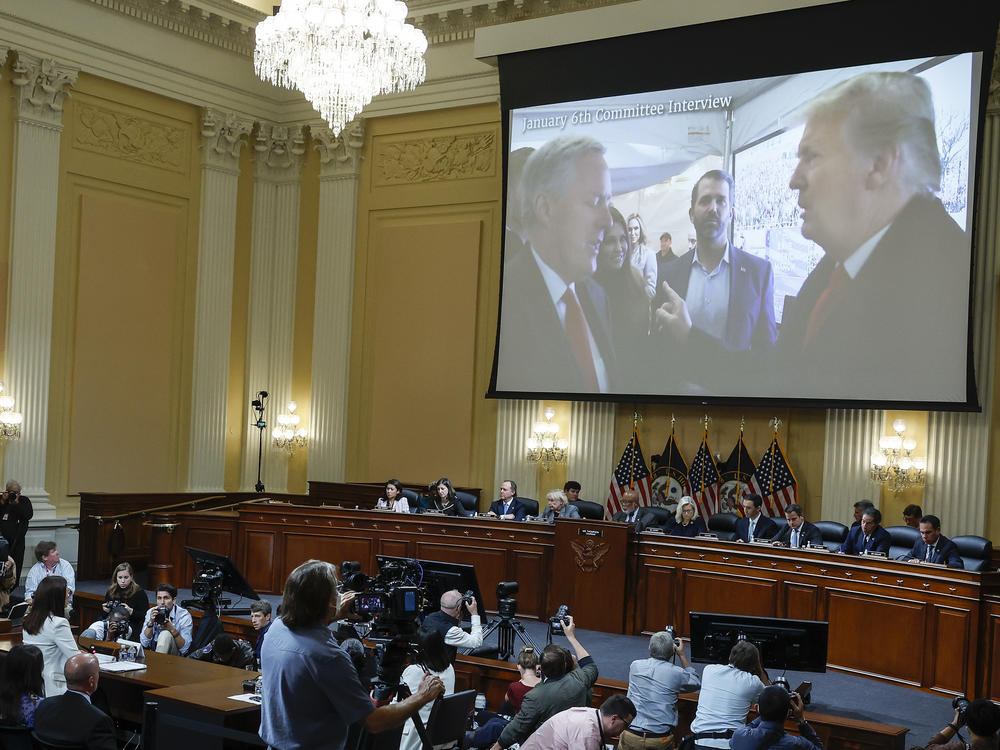 An image of former President Donald Trump talking to his Chief of Staff Mark Meadows is displayed as Cassidy Hutchinson, a former top aide to Meadows, testifies about events around the Capitol insurrection to the House Jan. 6 select committee. / Getty Images

Explosive firsthand testimony was delivered Tuesday before the Jan. 6 committee from a former Trump White House aide about the former president's conduct on the day of the insurrection and leading up to it.

Cassidy Hutchinson, who was a principal aide to White House Chief of Staff Mark Meadows, testified under oath about a volatile and angry president. Trump, she said, was prone to throwing dishes and once even grabbing the wheel of the presidential limousine because that's how badly he wanted to go to the Capitol with the rioters.

Trump and Meadows, Hutchinson said, knew of the potential for violence before Jan. 6; the names of violent white supremacist groups who showed up at the Capitol that day were being bandied about in the White House when the president's lawyer, Rudy Giuliani, was around; Trump knew people who showed up at his speech on Jan. 6 had weapons and was furious the many were being stopped by magnetometers; and when the insurrection was taking place, Meadows seemed to have little reaction while Trump didn't care.

"He doesn't want to do anything, Pat," Meadows said, per Hutchinson, in a conversation with White House lawyer Pat Cippolone, who was urging Meadows to push Trump to tamp down the violence.

Cipollone responded: "Mark, something needs to be done, or the blood is going to be on your effing hands."

There were lots of other eyebrow-raising accounts just like that one in the hearing that was announced only the day before. The committee, in announcing the hearing, said only that there was new information that had come to light.

Here are five takeaways from the hearing:

1. We've heard about Trump's temper throughout his life, but this was the most vivid detailing of it during his tenure as president.

Hutchinson painted a picture of a volatile man who was far from what Americans have long expected from how their presidents should comport themselves. Here's some of what she recounted:

-- Trump grabbed the steering wheel of the presidential limousine and put his hands on the "clavicles" of the Secret Service agent driving the car.

Trump had grown "irate" when he heard the Secret Service said it couldn't secure the area around the Capitol, and Trump had to be taken back to the White House.

"I'm the effing president," Trump thundered. "Take me up to the Capitol now."

-- Trump had a penchant for throwing dishes. Hutchinson recalled going into the presidential dining room on Dec. 1, 2020 after Bill Barr had said in an interview that there was no evidence of widespread fraud in the election.

Hutchinson found ketchup dripping from the wall and a shattered plate on the ground. The president was "extremely angry" with Barr's interview. Trump, Hutchinson said, had thrown his lunch against the wall. Hutchinson grabbed a towel and helped staff clean the wall.

Hutchinson said there were "several times" throughout her tenure with Meadows, when Trump threw dishes and flipped the tablecloth in the dining room, so contents of the table broke or went everywhere.

2. The committee is methodically trying to establish intent and premeditation.

It's a difficult threshold to reach, but the committee is deliberately and intentionally laying out the building blocks for intent and premeditation. At Tuesday's hearing, it showed:

-- Meadows was told of intelligence ahead of Jan. 6 that the day could get very violent. He shared that with Trump. But Meadows rarely had any reaction or seemed surprised at all and was equally nonplussed by the violence on the day of the insurrection, according to Hutchinson.

-- Meadows also participated, by phone, though he wanted to go in person, for a briefing with Roger Stone and retired Gen. Michael Flynn in the "War Room" they had set up on Jan. 5 in the Willard Hotel.

Stone and Flynn were intimately involved in the "Stop the Steal" movement. There have been pictures of Stone with white supremacist militia functioning as his bodyguards on Jan. 6.

Flynn has been linked to the QAnon conspiracy and pleaded the Fifth, the right not to incriminate yourself, on multiple occasions before the Jan. 6 committee, including when asked simply if he believed in the peaceful transfer of power in the United States.

-- Trump knew of violent people in the crowd, knew they were armed, didn't want their weapons taken away and didn't feel threatened.

"I don't care that they effing have weapons," Trump said, according to Hutchinson. "They're not here to hurt me. Let them in, take the mags away." Trump noted they can march to the Capitol afterward.

Instead, Trump was more concerned that the crowd wouldn't look as big as he wanted it to in pictures and was firing them up, encouraging them to go to the Capitol after his speech.

"He doesn't want to do anything," Meadows said of Trump, per Hutchinson. "These are his people."

At another point, Hutchinson said she overheard Meadows telling Cipollone, who was urgently telling Meadows about the violence and that they even are chanting to hang Pence, "You heard him, Pat. He thinks he deserves it. He doesn't think they're doing anything wrong."

There's nothing explicit so far of people testifying that Trump said he wanted supporters to violently storm the Capitol, but there are lots of bread crumbs.

3. White House lawyer was worried about legal exposure for Trump and the White House.

With Trump pushing hard to be allowed to go to the Capitol with his supporters, as many White House aides testified, Cippolone was concerned that he and others at the White House could be charged with crimes if Trump did go.

His message to Hutchinson and Meadows when it came to Trump wanting to go to the Capitol: make sure it doesn't happen.

"We are going to get charged with every crime imaginable if that happens," Cippolone said, per Hutchinson.

She noted that Cippolone said it would look like Trump was inciting a riot and there could be charges related to obstruction of Congress and conspiracy to defraud the United States because of blocking the counting of electoral votes.

The committee also revealed on Tuesday that the potential crimes committed weren't just in the past. Toward the end of the hearing, Vice Chair Liz Cheney, R-Wyo., warned of potential witness tampering.

4. Add Meadows and Giuliani to the list of those who sought pardons.

Speaking of legal exposure, Hutchinson testified Tuesday that her boss, Meadows, and Giuliani sought pardons and didn't get them.

In the last hearing, there were about half a dozen Republican members of Congress who were also named as seeking pardons. Now, again, like those Republican members of Congress, it's not explicitly known why they were asking for pardons – if they believed they did anything illegal or if they simply thought a Democratic administration would target them.

But Meadows did speak with Stone and Flynn – as did Trump – and Giuliani was identified Tuesday as someone mentioning the Oathkeepers and Proud Boys before Jan. 6 in the corridors of the West Wing.

A lot of people were worried about legal exposure, but the question continues to be what legally will come of these hearings.

The Jan. 6 committee is not a law enforcement body, and it's not clear what's happening at the Justice Department and FBI from an investigative standpoint as it relates to the White House and Jan. 6.

5. Republicans largely have their fingers in their ears about these hearings.

Hutchinson is a Republican. In fact, almost everyone testifying during these hearings have been Republicans, from White House staff and lawyers to campaign aides and state elections officials.

These were people working for Trump's White House, trying to get him reelected or others who voted for him.

It's hard to know what will move the needle of politics nowadays with such entrenched partisanship or if this will potentially damage Trump in the medium term because of all the drama attached to him.

But Republican viewers right now are not tuning into the primary source evidence.

A CBS/YouGov poll conducted last week found that while almost seven in 10 Democrats are following the hearings some or a lot, just a quarter of Republicans are and less than half of independents.

Overall, half of respondents said they think Trump was trying to stay in office through illegal means. More than eight in 10 Democrats and 51% of independents thought so, but just 13% of Republicans did.

And while 80% of Democrats think the Jan. 6 committee should recommend Trump be charged with crimes, 44% of independents feel the same and just 8% of Republicans do.

It's hard to hear a tree fall in a forest when you're thousands of miles away. 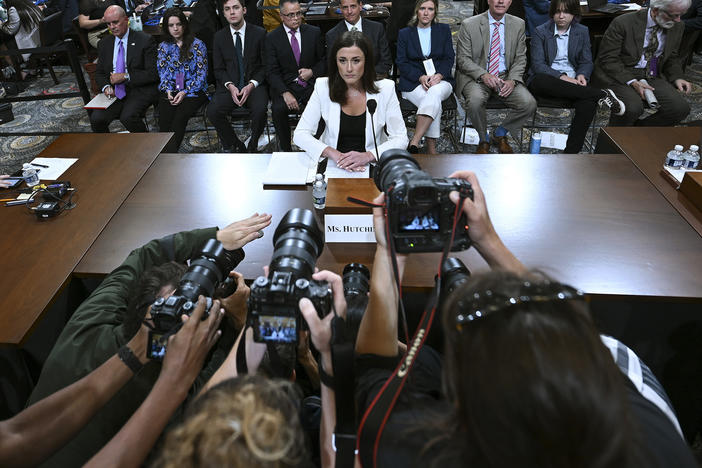 The explosive testimony about former President Trump's actions on Jan. 6, 2021, has led to calls from some right-leaning outlets that Trump is unfit to serve in office. 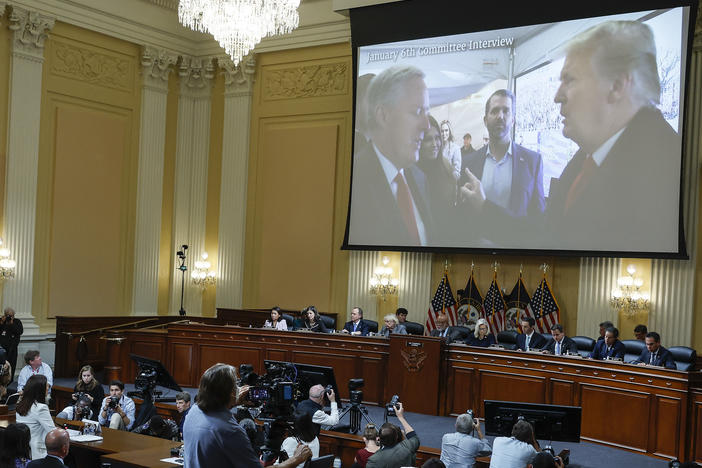 Trump's legal exposure may be growing – and 4 other takeaways from the Jan. 6 hearing

Former White House aide Cassidy Hutchinson testified under oath about a volatile and angry president who was prone to throwing dishes, knew that supporters were armed and didn't want the riot to stop. 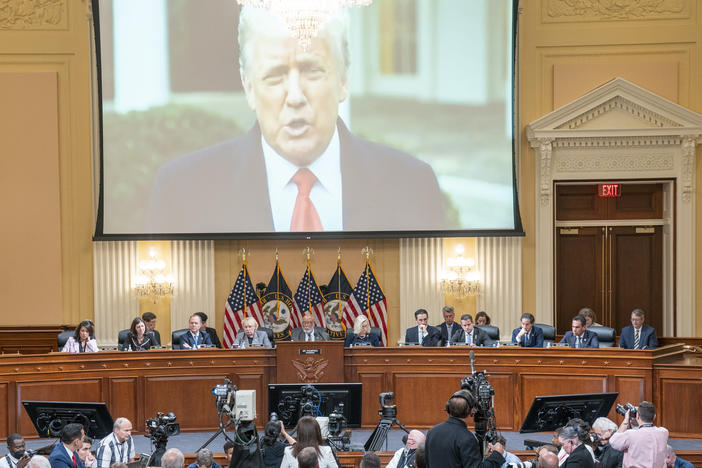 Former Mark Meadows aide Cassidy Hutchinson recalls exchange between her boss and White House Counsel Pat Cipollone, who warned "Somebody is going to die and this is going to be on your effing hands."