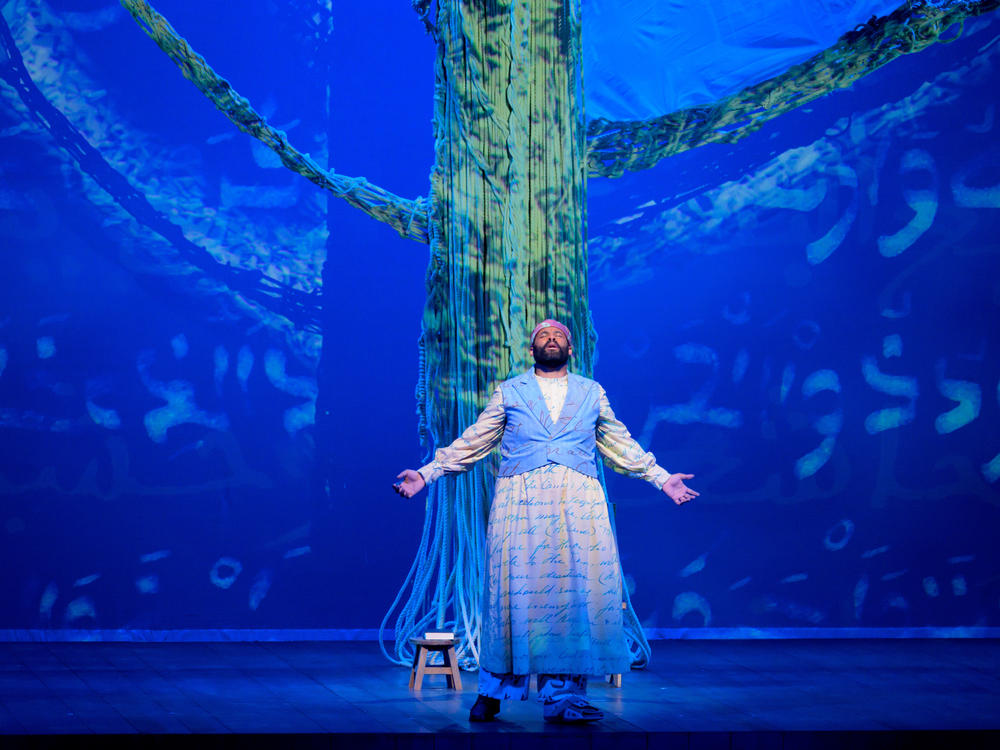 A new opera tells the true story of an enslaved man taken from his home in what is now Senegal and trafficked to South Carolina. The opera premiered at the Spoleto Festival USA, less than a mile down the road from where the man was sold and after which he spent five decades on plantations, including the one at which he wrote his autobiography — the only known, surviving slave narrative written in Arabic.

Julie, an enslaved Black woman, is a fictional character that Rhiannon Giddens created for this opera. When Julie first met the newly enslaved man, she later tells him, he reminded her strongly of someone else: "My daddy wore a cap like yours," she sings. She's referring to the kufi that many Muslim men and those from the African diaspora wear.

The opera Omar is a broadly American story. But history hangs particularly heavy and close in Charleston, S.C., where the opera had its debut in late May. The real man on whom this opera is based, Omar Ibn Said, was a Muslim man who became a slave in Charleston, like about 40 percent of other Africans who were forced into North America. Said then spent five decades on a plantation in Fayetteville, North Carolina. While there, he wrote his autobiography — the only known, surviving slave narrative written in Arabic.

"It was shocking," Giddens says of learning of Said's autobiography, "Somebody or an event that's from my home state that's massive, such a huge story. And I've never heard this story, having lived the majority of my life in North Carolina." Trained in college as an opera singer, Giddens is best known as an American roots musician, a singer and songwriter who wields a mean banjo and makes her viola croon. More than that, she says, "I guess I look for overlooked stories to tell."

Said was a well-educated Fulani, one of the largest groups of people scattered throughout the Sahel and West Africa, and had studied the Qur'an intensely. At age 37, he was captured during a war and sold into slavery. He then endured the Middle Passage over what he called "the big sea."

Said escaped his first slaveholder, but was captured again in North Carolina. While jailed there, he began writing on the walls in Arabic, the language of the Qur'an. His literacy in Arabic and his religious piety became objects of fascination to his second owner, a plantation owner named Jim Owen whose brother John became the governor of North Carolina.

During his time enslaved in Fayetteville, Said appears to have converted to Christianity. And he wrote his autobiography at his owner's behest, says Michael Abels, who co-composed the opera with Giddens. Best known for his scores to the films Get Out and Us, Abels provided Omar its lush orchestrations.

"On the one hand, while they had respect for his abilities," Abels notes, "They certainly had no intention of ending his enslavement as a result of that. They were more interested in having him perform and having him convert to Christianity to make them feel better."

Ala Alryyes is a professor of English at Queens College, the City University of New York. He also translated the real Omar Ibn Said's autobiography from Arabic into English — and was brought in as an advisor on the opera project. He says Said's work shows up the lie that enslaved Africans were ignorant, illiterate, and in need of conversion.

"It demonstrates a cultural background and literacy that a slave brought with him to the United States and did not really acquire here," Alryyes says. "Our understanding of American slavery has been American-based, and ignores the background that these enslaved persons brought with them from Africa, whether they were Muslim or not, whether they spoke Arabic or other languages. It opens our eyes to the fact that their cultures were obviously, within a few generations, lost." 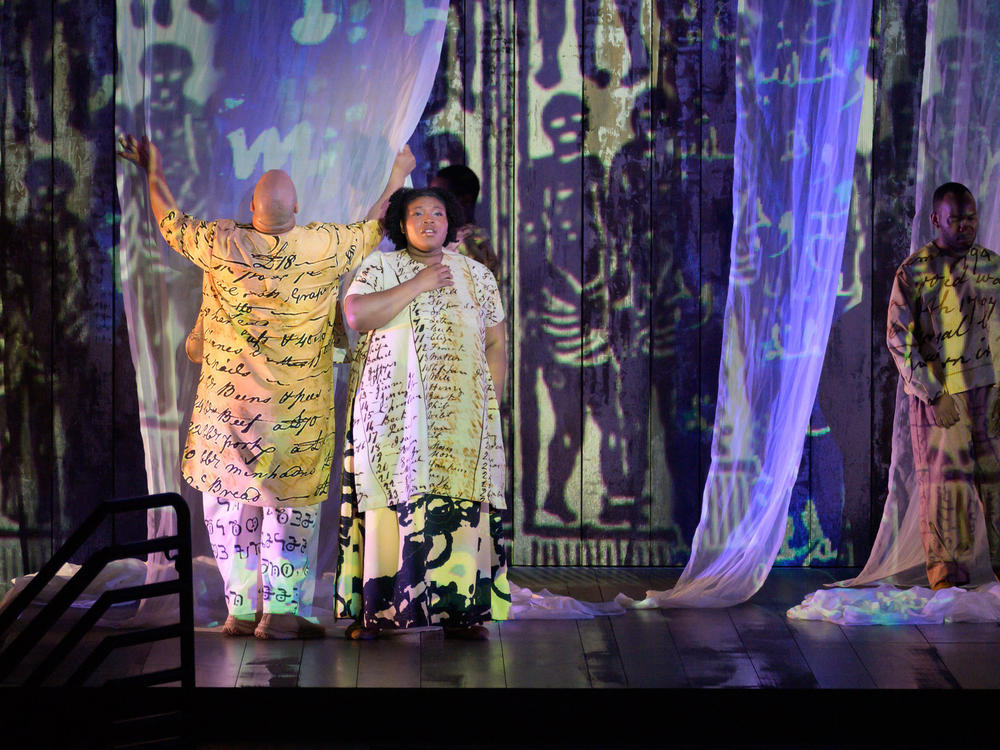 Said's autobiography was the inspiration for the opera, explains Michael Abels. "The opera tells the story of his journey — but also his spiritual journey as he was confronted with the challenges of being enslaved and the challenge of being asked to give up his spiritual identity as well as his freedom," he says. "And when you think about what's not stated — that's what's powerful about it, what the things that are that are left as clues that show you what it's like to have your every move watched, to need to tell your story in a way that's going to be approved."

Hussein Rashid is a scholar specializing in Muslims in U.S. popular culture. Like Alryyes, he was an advisor on this opera. Rashid says that in his autobiography and other writings, Omar Ibn Said offers some coded language and certainly ambiguity in his actual beliefs. Rashid points to one chapter from the Qur'an that Said quotes in the autobiography that addresses God's power and sovereignty: the Sura al-Mulk.

"The way I understand this, and the way several other scholars understand this," Rashid explains, "Is that this is Omar talking about being enslaved, recognizing that it is other human beings playing at power, playing at having sovereignty, playing at having authority over other human beings. And he is saying, 'No, you don't actually know what power is, you don't know what sovereignty is, you don't know where my allegiance is.' And I think this is really a spiritual nourishment for Omar."

Omar's quest to preserve himself when every force connived to take away everything that belonged to him is the crux of this project, says the opera's director, Kaneza Schaal.

The creative team cleverly interpreted those interweavings of language and belief on the opera stage. Said's manuscripts in both Arabic and English are projected onstage; the opera's characters literally wear various languages on their clothing.

Rhiannon Giddens says that Said's life story presented lots of creative opportunities to flow between musical languages as well. Giddens composed most of the music for Omar on the banjo and integrated her deep knowledge of folk music into the opera. But the music also morphs and transforms to meet the characters – in scenes set in Senegal and in Said's imagination, a harp evokes a West African kora, for example, while music for the white slaveowners and slave auctioneer thud along in boomy, declarative Western harmonies and cadences. Singers in the production complimented Giddens and Abels for writing arias and choral sections that were a pleasure to perform.

"Look, I'm a banjo player," Giddens says. "If somebody said, 'Oh your opera is accessible, I'm like, 'That's the highest compliment ever!' What I do is bring in these connections to deep, deep vernacular and folk traditions from American culture. I'm really hoping that it also adds to the narrative of who gets to be called a composer, who gets to create these large-scale works."

The opera stage is a space that still often leaves out Black creators and stories of the Black experience. Giddens hopes that Omar forms a pathway — and it looks as if Giddens has succeeded. Omar is already scheduled to be staged at other opera companies across the United States, including in Los Angeles, Boston, San Francisco, Chicago and in Chapel Hill, N.C. — close to where the real-life Omar Ibn Said was enslaved for 50 years.

Said died in 1863, at age 93, in the middle of the Civil War, and was buried on one of Owen's plantations. There is no marker for his grave. There is a mosque in Fayetteville named for him, however: the Masjid Omar Ibn Sayyid. 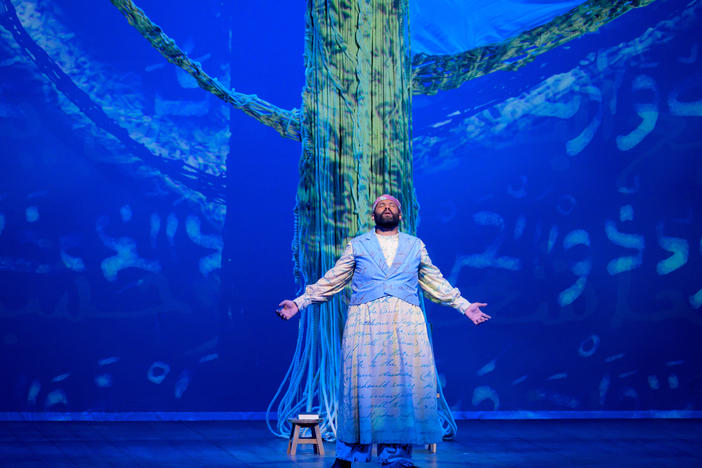 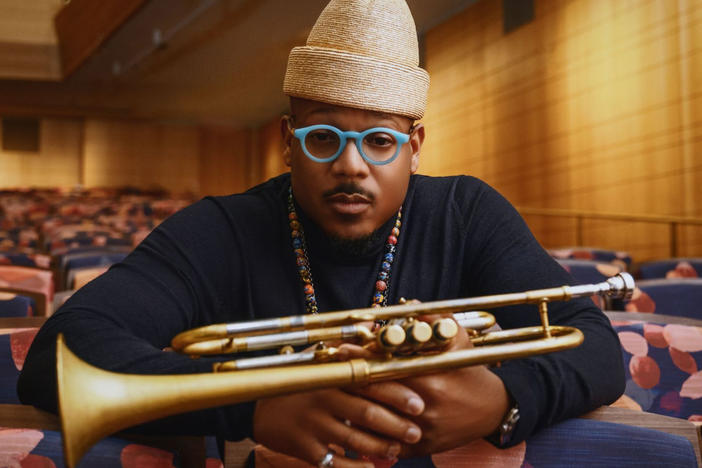 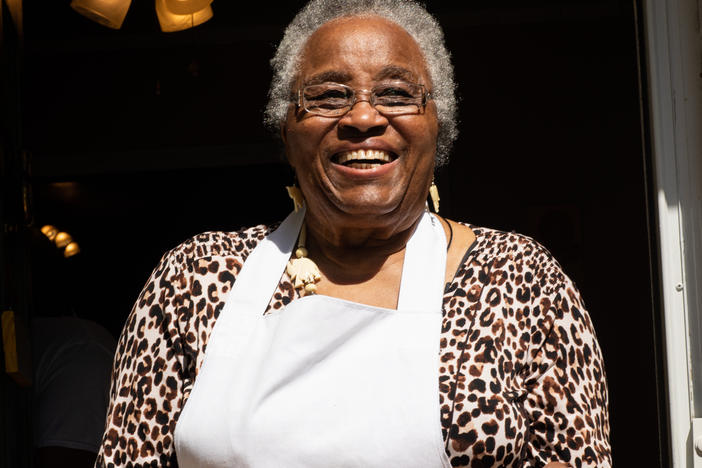 For this 89-year-old Gullah Geechee chef, cooking is about heart

Emily Meggett has spent decades caring for her community and family with her delicious, traditional Gullah Geechee food from South Carolina. Now, she's sharing that cuisine with the world.