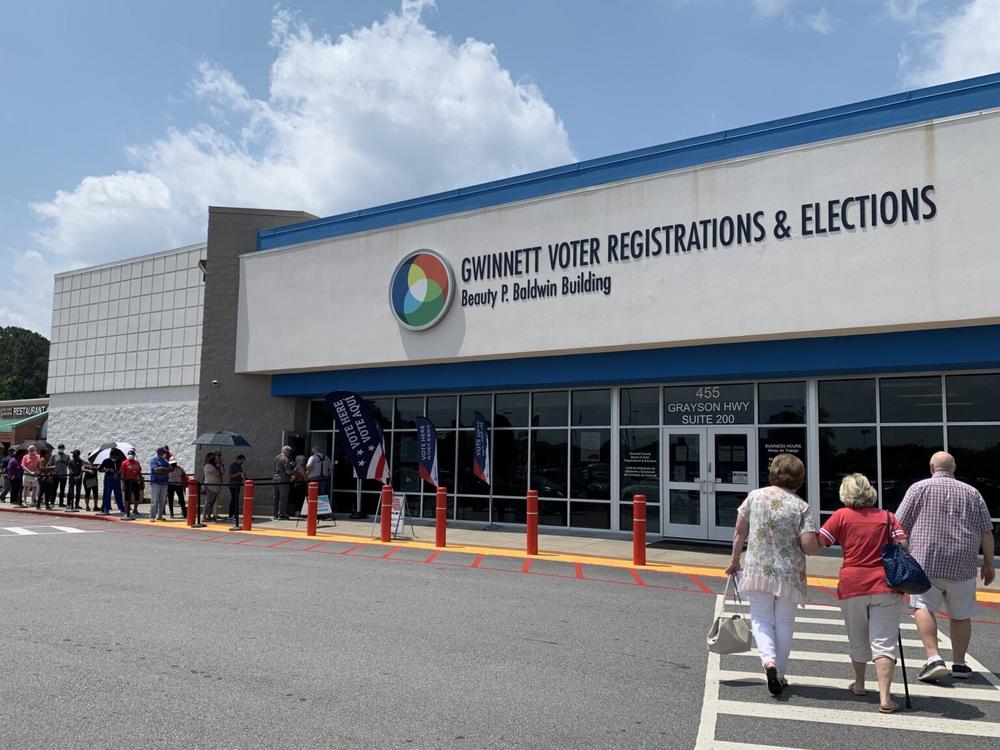 The D7 race is one of the few spirited Democratic primaries that are playing out in Georgia as several incumbent Republicans fight off challengers endorsed by former President Donald Trump. Either way, Georgia will lose one Democratic congresswoman.

Thomas Jonah has no complaints about Democratic Congresswoman Carolyn Bourdeaux, who has represented Georgia’s 7th congressional district since she flipped it in 2020.

But the Lawrenceville resident says he also admires Congresswoman Lucy McBath, who currently represents Georgia’s 6th district but jumped into the Gwinnett County-based district after Republicans redrew her territory to favor a GOP candidate.

Jonah says it wasn’t an easy decision, but in the end, the former Bourdeaux voter says he cast his ballot for McBath.

“I feel Lucy will be more forceful,” Jonah said after voting at the county’s Beauty P. Baldwin Building in Lawrenceville Thursday. 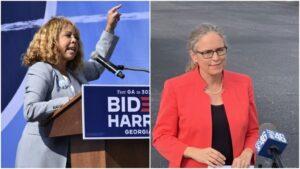 Congresswoman Lucy McBath (left) and Congresswoman Carolyn Bourdeaux are facing each other in a closely watched May 24 primary.

Bourdeaux, McBath and state Rep. Donna McLeod are on the May 24 ballot as they compete for the Democratic nomination in this ethnically and racially diverse suburban district northeast of Atlanta. Whoever wins will face a Republican in the fall, but the seat was redrawn last year as a safer seat for Democrats.

Meanwhile, the Republican-drawn maps were designed to shift the balance of Georgia’s 14 congressional districts and allow the GOP to gain a seat – McBath’s current district, which she flipped in 2018 – in the northern suburbs at a time when national Republicans are making a push to take control of the U.S. House of Representatives.

Bourdeaux has a built-in advantage since the district includes nearly two-thirds of her old turf, but other factors – like identity and personality – will likely come into play as voters ponder their choices, says Matthew Gunning, an assistant professor of political science at Georgia Gwinnett College. The district also now includes a small portion of McBath’s current district.

“This is one of the reasons that even though Bourdeaux starts off with a huge advantage in having represented most of these voters, the betting markets and the people who watch these things carefully think McBath is going to win this election partly because of race and then also because of charisma,” Gunning said.

Bourdeaux’s moderate approach would have set her up well for a reelection bid in a competitive swing district, Gunning said.

“I don’t think that plays to her advantage as well in a primary contest,” he said.

But Bourdeaux’s supporters say not to underestimate the local support the freshman Democrat has cobbled together over the years. The former public policy professor and Georgia Senate budget director first ran for the district in 2018, when she narrowly lost a bid to oust the Republican incumbent.

“I still think it’s hers to lose. She’s very much in connection with our community,” said state Rep. Gregg Kennard, a Lawrenceville Democrat and a longtime supporter of Bourdeaux who said he respects her disciplined approach to decision-making.

“I can just vouch that she’s the real deal,” Kennard said. “Her character, her policy skills stand out to me. She really knows what she’s talking about and understands even the nuts and bolts of economics and the government.”

It also remains to be seen how far to the left the suburban Atlanta district’s voters will want to go. Observers of Gwinnett County Democratic politics say they have not seen any noticeable shift leftward in the messaging during the closely watched primary contest.

For now, Brenda Lopez Romero, a former Democratic state lawmaker who now chairs the Gwinnett County Democratic Party, says it probably will not boil down to policy differences, since the two are so similar in that way. Decisions are likely being made based on relatability and connection, she says.

“I will say that going forward, whoever gets elected, will most definitely have to shift left if they plan on staying,” she said.

Romero says she is also hearing consternation among local Democrats who have supported some or all the candidates at some point. 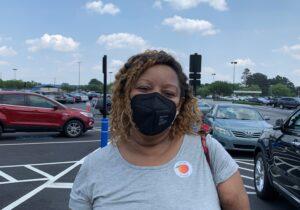 Cheryl Cust said she ended up voting for Lucy McBath because of her focus on gun safety.

You can count longtime Lawrenceville resident Cheryl Cust among them.

“I was really upset about how they drew new lines for the district. That really upset me because I really am passionate about Carolyn Bourdeaux and Lucy McBath and having to pick one over the other was a painful choice for me,” Cust said.

But in the end, she landed on McBath because she said she liked her focus on gun safety. McBath famously entered politics after her son 17-year-old Jordan Davis was murdered at a Florida gas station in 2012 by a white man who was angry about the loud music being played by the Black teenager and his friends.

Cust said she is deeply troubled by a new GOP state law that allows people to carry a concealed handgun in Georgia without a permit.

The D7 race is one of the few spirited Democratic primaries that are playing out in Georgia as several incumbent Republicans fight off challengers endorsed by former President Donald Trump.

Republican voter Sandra Gardner, who was picking up materials to become a poll watcher Thursday, cast her ballot for Mark Gonsalves, one of the five GOP candidates competing to be on the November ballot.

To her, fast-growing Gwinnett County’s rapidly changing political preferences came as a surprise last election. In 2016, Hillary Clinton became the first Democrat to win the county since Jimmy Carter, but at this point, Democrats run the local government too.

“I was shocked last time around when Carolyn Bourdeaux won because I didn’t know that Gwinnett had swung that far Democrat. And I was just really shocked. I was like, wow, what just happened here?” Gardner said.

The closely watched primary comes as national Democrats try to hang on to their slender majority control of the U.S. House, which now stands at 221-208 with six vacant seats.

Bourdeaux has been highly critical of McBath for trying to win the 6th District seat rather than fighting to win re-election in her own district, a nearly impossible feat as the newly redrawn district appears to now be a guaranteed Republican seat.

“Lucy has made a calculated choice that it is easier to come to and fight me in the 7th than to fight Republicans in her own district,” Bourdeaux wrote on Twitter. “By doing this, she is giving up her seat, and she is helping Republicans take back the house in November.”

McBath’s current district will change from the left-leaning suburbs of Cobb, Fulton and DeKalb counties to the more rural and conservative parts of Cherokee, Forsyth and Dawson counties. It will switch from a district that gave President Joe Biden 55.7% of the vote in 2020 to one that favored Donald Trump with 57.8% of the vote. The Cook Report labeled the district as “Solid Republican.”

If neither candidate gets 50% of the vote for the Democratic nomination, they will compete in a runoff on June 21.

Both lawmakers have also passed some of their policy initiatives into law. McBath sponsored H.R.2938, a 2019 bill to amend current bankruptcy law to help veterans with disabilities qualify for relief during financial hardship.

Another bill of hers, H.R.7259, passed in 2021 and made it easier for inventors to obtain patents.

Bourdeaux’s first piece of legislation she passed into law was an extension of the Paycheck Protection Program, which allowed small businesses to continue obtaining financial assistance during the height of the COVID-19 pandemic.

The Suwanee Democrat also championed a federal Medicaid look-alike option for low-income adults in states like Georgia that have not expanded the government-run insurance program. But she also drew the ire of progressives when she joined a small group of centrist Democrats who demanded the House first approve the bipartisan $1.2 trillion infrastructure bill before turning to the president’s sweeping domestic policy agenda.

McBath has said her desire to stay in Congress comes down to a promise she made to her son.

“I made a promise to Jordan after he died,” McBath said in a statement when she announced her plans to run in the 7th District. “I promised that I would do everything in my power to prevent the tragedy that happened to my family from reaching any other. Today, I intend to keep that promise. I am announcing my run for the newly created Democratic district in Georgia. I need you to stand with me because I cannot do this alone.”

During an early May Democratic primary debate, both Bourdeaux and McLeod, criticized McBath for leaving her district to a GOP front runner, Rich McCormick, a staunch abortion opponent who Bourdeaux defeated in 2020. He’s now running in McBath’s district.

“What you are doing by leaving your seat and coming over into the 7th is handing the Republicans a seat, handing the NRA a seat, and allowing [U.S. House Minority Whip Kevin McCarthy, R-Calif.] to be one step closer to becoming speaker,” Bourdeaux told McBath during the debate. “Everything that we have been fighting for, you are undermining by leaving and coming and fighting me here.” 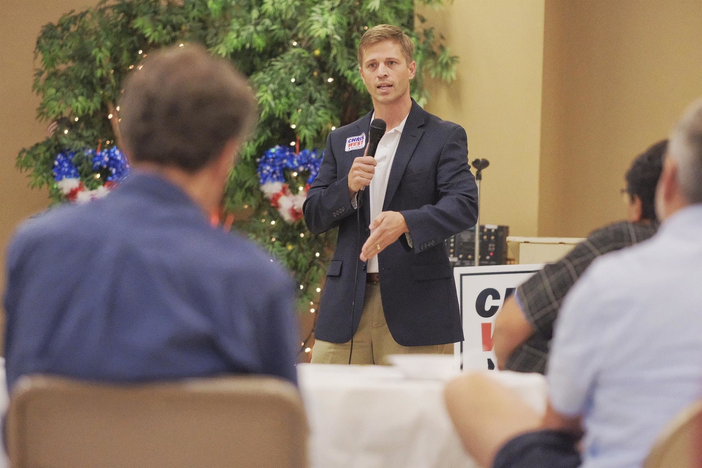 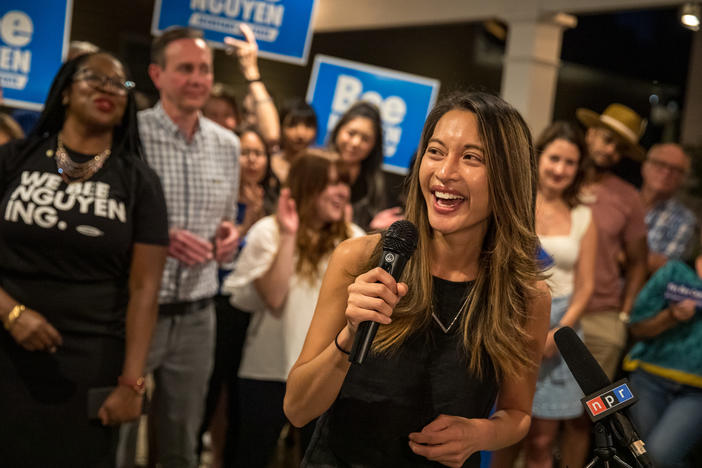