Georgia election board dismisses claims of ‘ballot harvesting’ in 2020 election 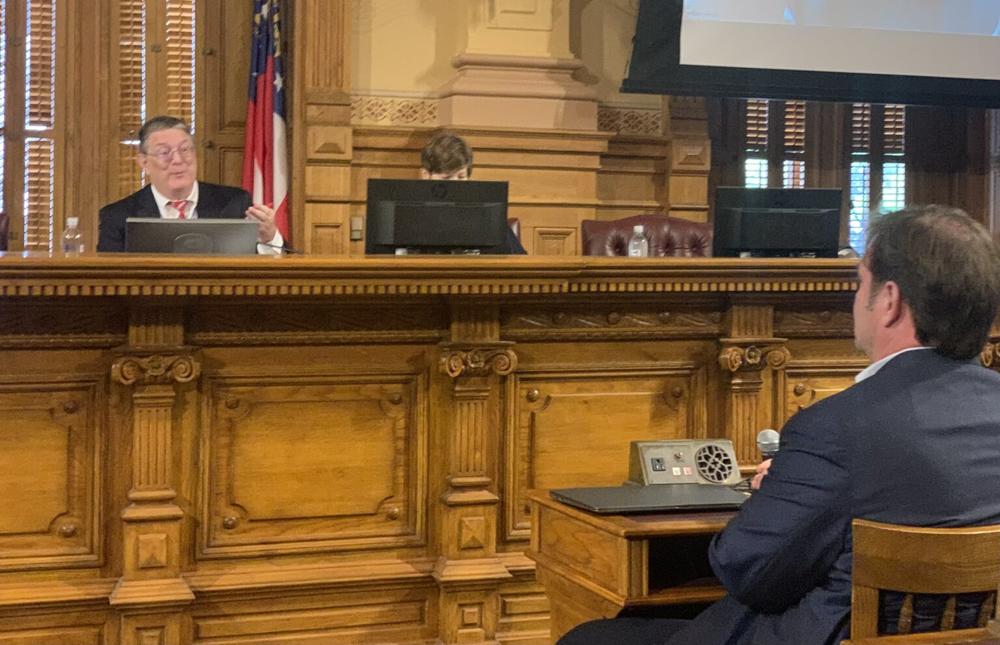 Georgia State Election Board Member Matt Mashburn, left, on Tuesday said that while the video footage of Gwinnett County voters dropping off multiple ballots in the 2020 election warranted an investigation, he supported dismissing the three complaints of “ballot harvesting” filed ‌by‌ ‌David‌ ‌Ross,‌ ‌bottom‌ ‌right, after a state elections investigator said that the voters were dropping off ballots from relatives.

The Georgia State Election Board voted unanimously Tuesday to dismiss three cases based on claims of illegal “ballot harvesting” as the baseless conspiracies over the 2020 presidential election still swirl even as the 2022 election season is already well underway and setting records for early voting.

The board, comprised of three Republicans and one Democratic appointee, agreed to accept a state investigator’s recommendation to not pursue claims against three Gwinnett County residents erroneously suspected of illegally dropping off multiple absentee ballots into drop boxes. Investigators with the secretary of state’s office determined the ballots were from voters themselves and family members living in the same households.

The allegations of large numbers of people illegally depositing ballots in drop boxes set up during the 2020 presidential election has been reignited in the national spotlight with the recent release of “2000 Mules,” which attempts to use video surveillance footage and cell phone tracking data to prove rampant voter fraud contributed to the election loss of then-President Donald Trump to Democrat Joe Biden.

The information used by conservative filmmaker Dinesh D’Souza in the movie came from far right-wing organization True the Vote. On Tuesday, the State Election Board also voted to allow the state Attorney General’s Office to intervene if True the Vote doesn’t comply with subpoena requests to turn over records the group claims show a coordinated effort to rig the election.

Republican Election Board Member Matt Mashburn said that the despite the film’s inaccuracies about Georgia’s absentee voting process, the board is charged with investigating complaints like the cases on Tuesday’s agenda.

“We’ll call the balls and strikes fairly as we receive them and let the chips fall where they may, but it’s not going to be a witch hunt,” he said. “It’s going to be done soberly, and with great care by people who know what they do.”

The investigators said he was able to identify the voters using footage from cameras monitoring the boxes. Local election records verified that the ballots arrived at the county elections offices at the same time and that each went through a standard process before getting counted.

Under Georgia law, a person can mail in or drop off absentee ballots for family members, people they live with and if they are a caregiver.

And while a person can face criminal charges for illegally casting ballots, those would still be counted if they’re cast by registered voters.

One of the cases dismissed Tuesday stemmed from footage of a voter shown in the movie and on TV shows, such as Tucker Carlson Tonight on Fox News, whose personal information has been posted online and who has become a target of harassment.

Sara Tindall Ghazal, a Democratic election board member, said that the movie’s claims of widespread voting fraud have been discredited. She pointed out that Georgia Bureau of Investigations Director Vic Reynolds said that True the Vote’s cell phone data alone is not enough evidence to validate the harvesting claims.

The results of President Joe Biden’s 2020 win were confirmed through three counts, including one by hand, in what Raffensperger called the most secure election in the state’s history. Both the GBI and FBI denounced widespread rumors of illegal ballot counting, harvesting of votes, and rigging of‌ ‌voting machines. Former President Donald Trump’s own attorney general said he found no evidence of widespread fraud.

“I’m deeply concerned that the individuals who are pushing these false narratives for their own purposes are enabling inflammatory rhetoric that risks conflict,” she said. “But I also have a deep belief that Georgia voters will come together across the political spectrum to reject efforts to dox and intimidate innocent voters and hardworking poll workers who are simply doing their jobs.”

Among the residents making public comments Tuesday, included members of VoterGa, whose founder is one of the plaintiffs in a lawsuit seeking to prove fraudulent votes by inspecting Fulton County’s original 147,000 absentee ballots from the 2020 election.

The meeting became testy at times as businessman David Cross, who has helped analyze Fulton ballot records for the plaintiffs, complained that he wasn’t notified by the secretary of state’s office or election board that complaints he filed would be on Tuesday’s agenda.

“The lack of communication here is astonishing and it’s embarrassing,” Cross said. “We, the citizens, have been asked to believe that this was the most secure and I won’t even finish the sentence. Why? Because there are so many errors, incomplete and missing documents. And even the staunchest advocates wonder if the results were the results at all?”

True the Vote has resisted a State Election Board subpoena for the evidence the Texas-based group says it has to prove its claims of misconduct in the 2020 election. Secretary of state attorney Ryan Germany said attorneys from both sides are working toward resolution, and a confidentiality agreement to protect a whistleblower to mitigate personal safety concerns raised by the organization.

Republican Board Member Edward Lindsey said it’s important that the state conduct its own investigation to determine if there are any merits to serious allegations.

“I believe it is incumbent upon us and the attorney general to pursue those allegations,” he said.