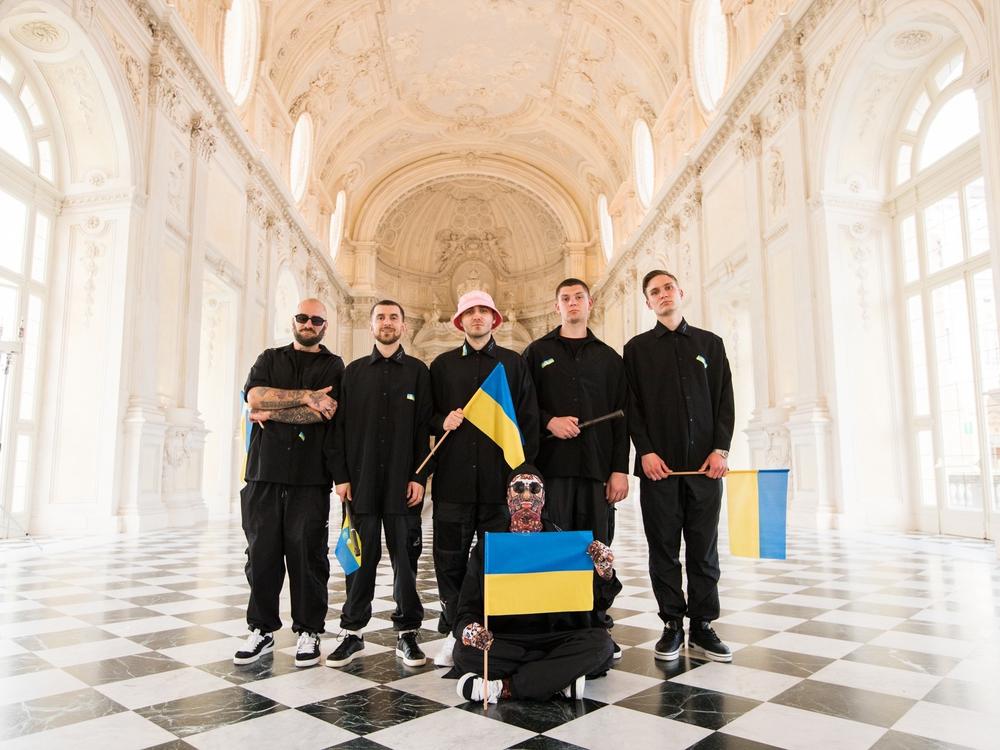 The members of Kalush Orchestra were granted special permission to leave Ukraine, and will return immediately after Eurovision ends. One stayed behind to help defend Kyiv.

Much of the world's attention has been focused on Ukraine since Russia launched its invasion in late February.

But the country will take the spotlight on a different kind of world stage on Saturday, when folk-rap group Kalush Orchestra competes in the grand final of the Eurovision Song Contest 2022.

Those parallel events are inextricably linked, as frontman Oleh Psiuk told NPR in a Zoom interview. He said it's a huge responsibility to represent Ukraine and its culture to the world, especially as Russia is actively trying to destroy it.

"We need support to show everybody that our culture is really interesting and has a nice signature of its own," he said. "It exists, and we have to fight now at all of the front lines."

The band is relatively new, but its style and song quickly became iconic

Kalush Orchestra has become a recognizable fixture of this year's competition, thanks in large part to its members' distinctive outfits, dance moves and wind instrument skills.

Its song, "Stefania," combines rapped verses and a folk chorus. Psiuk wrote it about his mother before the war, but it has since taken on a new, more patriotic meaning.

"Many people began to perceive it like Ukraine is my mother," he explains. "And this way the song has been very close to Ukrainian people."

Psiuk explains that the group's unique style is present not only in its music, but "in our images, in the concept, in anything we do."

While the current iteration of the band has only been around since last year, it has its roots in a three-person rap group called Kalush, which Psiuk helped found in 2019. It's named after his hometown in the western region of Ivano-Frankivsk.

Psiuk's family is still there. In his few spare moments between rehearsals and interviews, they tell him about the missiles flying overhead. 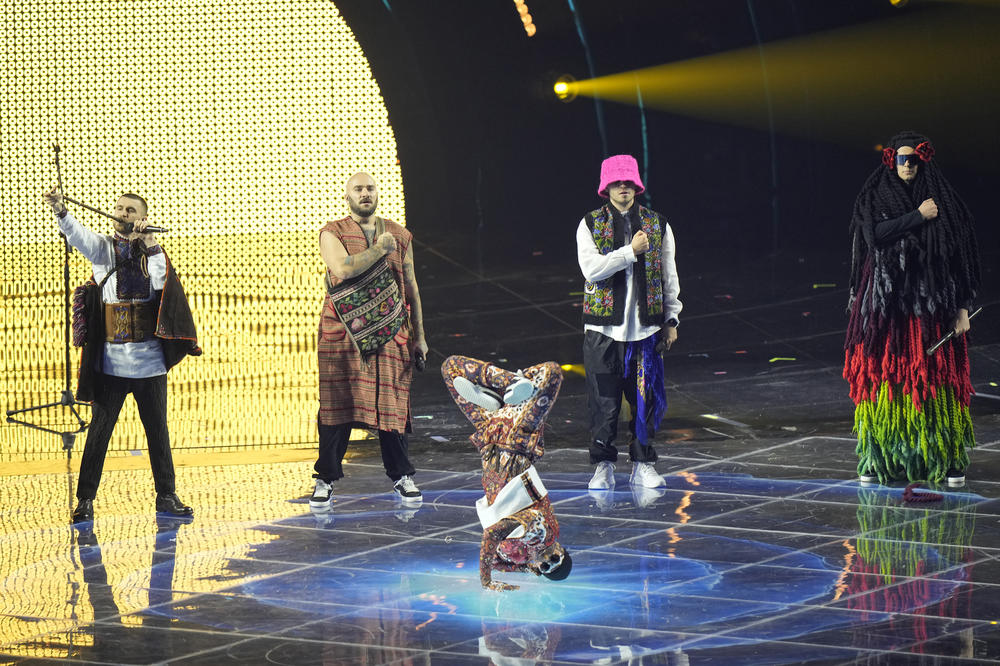 Kalush Orchestra from Ukraine singing "Stefania" performs during rehearsals at the Eurovision Song Contest in Turin, Italy on May 9.

The musicians fight for their country on and off the stage

The band's members are all men of fighting age, and had to get temporary permits in order to leave Ukraine for the competition in Turin, Italy.

One of them, Vlad Kurochka, or MC KylymMen (which translates to CarpetMan) chose to stay in Ukraine, where he's been helping to defend Kyiv.

The other musicians will return home immediately after Eurovision ends, Psiuk said.

He plans to return to the volunteer organization he started called "De Ty" (which translates to "Where are you"). Its roughly 35 volunteers coordinate things like transportation, medicine and accommodations for people across Ukraine, who submit requests via a Telegram channel.

And Psiuk said while the band isn't able to focus on creating new music at the moment, it does have some already in the works.

What a Eurovision win would mean for Ukraine

Psiuk hopes the band will return to Ukraine as Eurovision champions, adding that any sort of win would help boost the country's morale.

"I would like to bring some good news to Ukraine, because good news [hasn't] been in our country for a long time," he said.

He encourages fans watching at home to cast their votes in Saturday's finale and show the band's music to their friends. And he hopes their support for Ukraine won't just end when the songwriting contest does.

Psiuk said it's important for people to attend peaceful rallies, post on social media and keep raising awareness in other ways.

"The more people speak about Ukraine, the quicker the war will be over and it will not start in other countries," he said, adding that he is grateful for the support his country has received so far.

It's customary for the country that wins Eurovision to host the following year's competition. Does Psiuk think that can happen in 2023?

"Yes," he said emphatically. "I'm sure that Ukraine will host Eurovision, and will gladly do that in the rebuilt, whole and happy Ukraine." 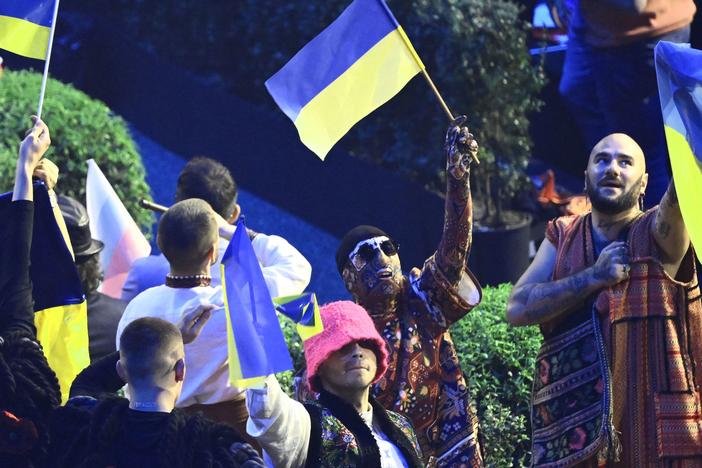 Ukrainian folk-rap group Kalush Orchestra will compete in the final round of the competition on Saturday. Their song "Stefania" is about the singer's mom, but has taken on new meaning during the war. 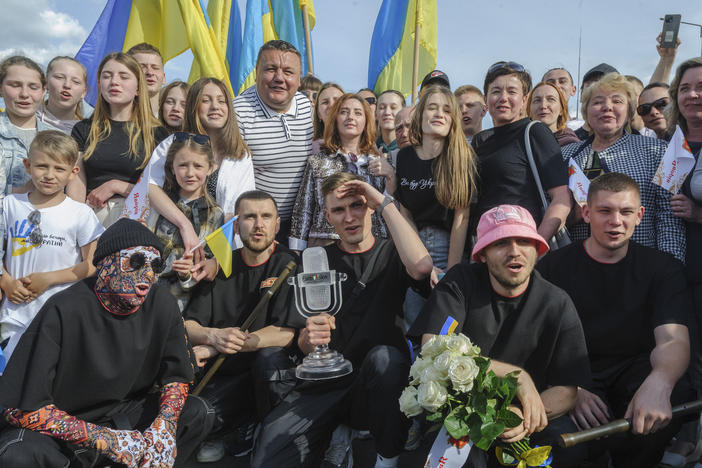 Public broadcasters and security experts concluded it's not feasible for the war-torn country to host, organize and produce the event. They're now turning to the U.K., which placed second this year. 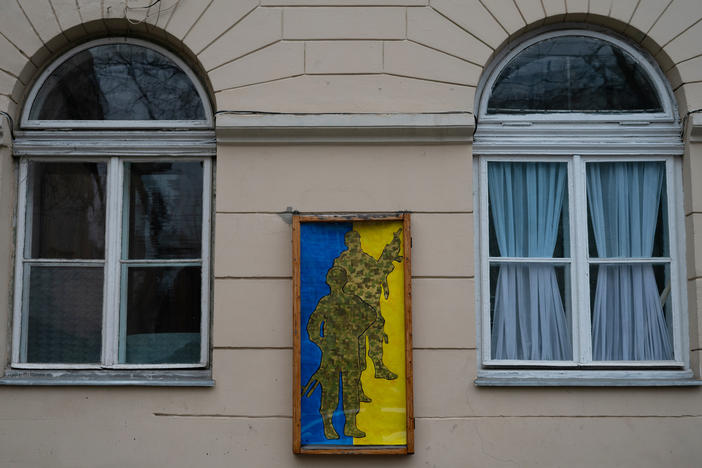 How some people are trying to make art, not war, in Ukraine right now

The lead singer in Ukraine's biggest rock band is one of Ukrainian celebrities who are using their fame and connections to speed relief supplies to those who need them most.