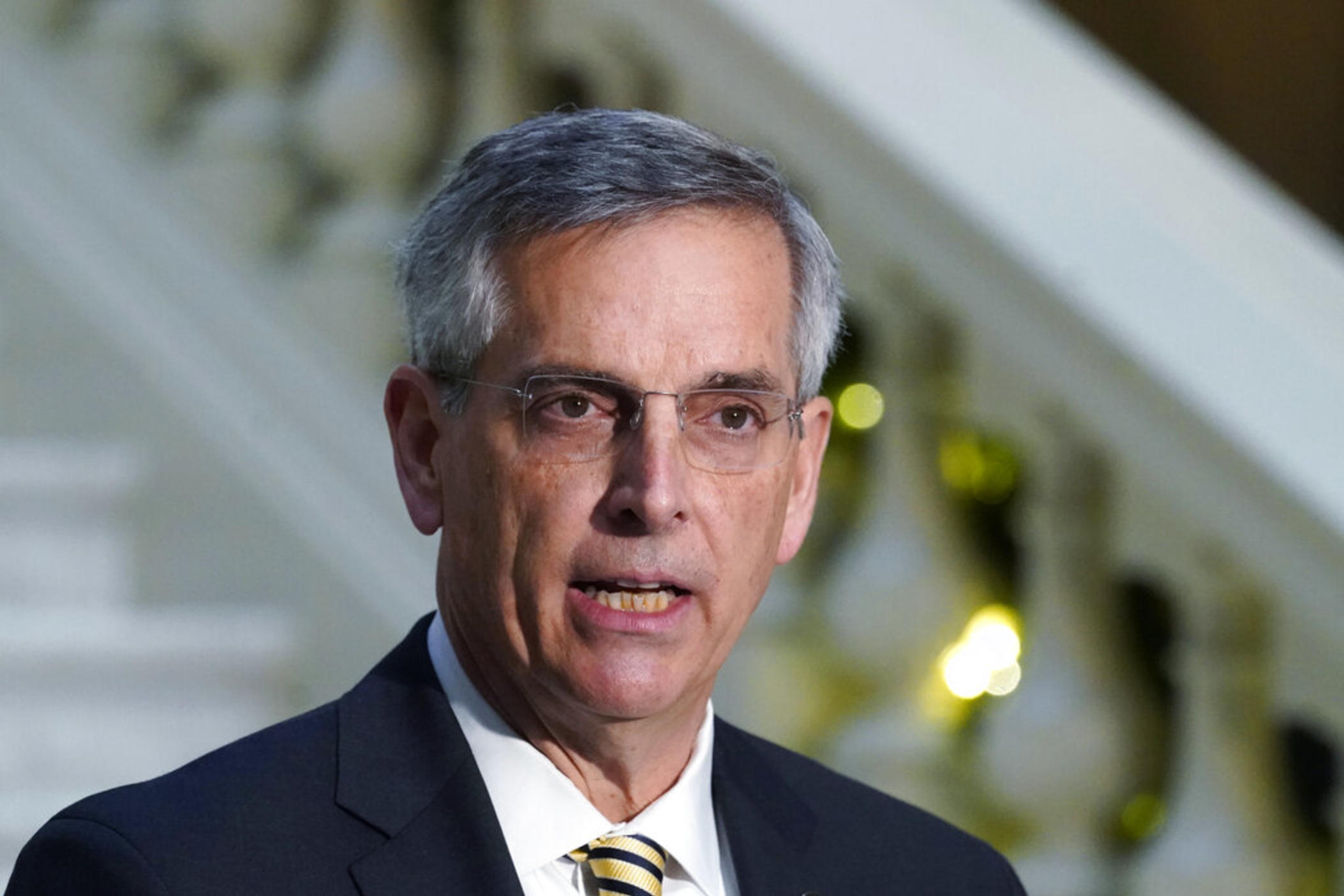 Brad Raffensperger says the Georgia and U.S. Constitutions should be amended to prohibit voting by people who aren't U.S. citizens. He oversaw a citizenship audit of the state's voter rolls and has announced plans to further integrate citizenship checks into the voter registration process.

The Georgia secretary of state readily acknowledges that noncitizen voting is not a problem. State law already bars those who aren't U.S. citizens from voting. And while his audit flagged more than 1,600 potential noncitizens who tried to register over the last 25 years, none was successful.

But Raffensperger, Georgia's chief elections officer, is nonetheless making the issue a centerpiece of his effort to win over diehard conservatives ahead of what could be a difficult bid to clinch the GOP nomination later this month for another four year term in office. He is one of Donald Trump's top primary targets this year after he refused to bend to pressure from the former president to overturn Joe Biden's victory in Georgia.

His insistence on honoring the results of a free and fair election in 2020 turned Raffensperger into an unlikely national figure at a moment when core democratic principles were being tested in the U.S. But in a recent interview, he reiterated his focus on noncitizen voting, noting that his office has referred the people flagged by the audit to law enforcement and election officials for further investigation.

Others, however, say Raffensperger is motivated by political calculations.

"This is a pretty safe red meat thing that he can throw to the base that he's hoping will satisfy them," Emory University political science professor Andra Gillespie said of Raffensperger's focus on noncitizen voting. "He's not doing this because there's a problem that needs to be solved. He's doing this because he wants to try burnish his conservative bonafides with the base of voters who are going to determine whether or not he's going to keep his job."

Contests for secretary of state typically attract little attention. But Trump's election lies have dramatically intensified the focus on such races. During his waning days in office, Trump pressed Raffensperger to "find" enough votes to overturn Biden's victory, a conversation that is now the subject of a grand jury probe in Atlanta.

The results in Georgia were certified after a trio of recounts, including one partially done by hand. They all affirmed Biden's victory.

Federal and state election officials and Trump's own attorney general have said the election was fair, and the former president's allegations were also roundly rejected by courts, including by judges Trump appointed.

Still, Trump has taken the unusual step of issuing endorsements in secretary of state campaigns across the U.S., including Georgia. He's backed a Raffensperger rival, U.S. Rep. Jody Hice, who objected to Georgia's electoral votes being counted for Biden.

In the final weeks before Georgia's May 24 primary, Raffensperger and Hice are running neck and neck, according to an Atlanta Journal-Constitution poll last month. About 40% of likely Republican voters were still undecided in the race.

At a recent debate, Raffensperger's three Republican challengers — Hice, former Alpharetta Mayor David Belle Isle and former county Probate and Magistrate Judge T.J. Hudson — accused him of causing Georgians to lose faith in elections. They criticized his coronavirus-related decisions to mail absentee ballot applications to all active voters ahead of the 2020 primary and to allow the use of absentee ballot drop boxes.

Raffensperger defended his record and the integrity of Georgia elections. He also repeatedly returned to his main campaign message, saying "the real issue that we're facing right now is noncitizen voting."

Georgia law already prohibits people who aren't U.S. citizens from voting in the state. But Raffensperger last year called on state lawmakers to pass an amendment to the state Constitution to prevent noncitizens from voting. He noted that a number of municipalities around the country have made it legal for noncitizens to vote in local elections. Raffensperger said he wants a constitutional amendment to make sure that can't happen in Georgia.

Legislation that would have allowed voters to decide on a constitutional amendment to prohibit noncitizen voting failed this year in the Georgia General Assembly.

Hice said Raffensperger is using the issue to distract from his record.

"Non-citizens voting in Georgia Elections is already illegal," Hice said in an emailed statement. "If Brad worked as hard at executing the responsibilities of Secretary of State as he does at political posturing, I wouldn't be challenging him."

State Rep. Bee Nguyen, a leading Democratic candidate for secretary of state, called it "a non-issue."

"We already have evidence to show that non-citizens are not voting," she said in an emailed statement. "Brad Raffensperger should be focused on ensuring that our local election boards are supported, and that every eligible citizen is able to cast their vote at the ballot box."

Raffensperger announced last month that a citizenship audit of the state's voter rolls identified 1,634 instances of potential noncitizens trying to register to vote since 1997. None were allowed to register to vote, and Raffensperger said his office referred them to law enforcement and election officials for further investigation.

His office says a handful of noncitizens have been caught casting ballots during his tenure and have been referred to prosecutors.

Last Wednesday, he unveiled plans to use a federal database to check the citizenship status of any voter registration applicant who's flagged as a potential noncitizen by the state Department of Driver Services when people register while getting a driver's license.

Raffensperger made that announcement in front of the federal courthouse in Atlanta as he took a swipe at Democrat Stacey Abrams, who is running for governor and is a popular target for state Republicans.

"While I'm taking steps to stop noncitizen voting and noncitizen registration in its tracks, Abrams and her allies are working to open the floodgates for all noncitizens to get on the voter rolls," Raffensperger said, repeating a claim he makes often that a lawsuit filed by Fair Fight Action, a group founded by Abrams, would do away with citizenship checks.

Fair Fight executive director Cianti Stewart-Reid said the lawsuit, which is currently at trial, challenges a voter registration policy that the group says improperly flags U.S. citizens as noncitizens, causing them to be disenfranchised.

"Our suit does not seek, and has never sought, to allow non-citizens to vote in Georgia," she said in an emailed statement. "Anyone who says otherwise is either not paying attention or deliberately misrepresenting what is at stake in our landmark suit."

As much as Raffensperger might like for the primary to be about noncitizen voting, it's more likely to be a referendum on how Republican primary voters feel about the legitimacy of the 2020 election, Georgia State University political science professor Amy Steigerwalt said. 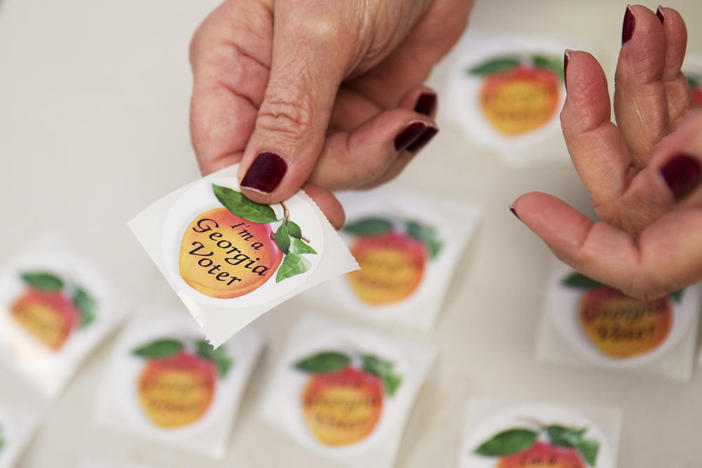 Is your voter registration information correct? Oct. 11 is the deadline to register in Georgia.

The deadline for voter registration in Georgia is Oct. 11, 2022. 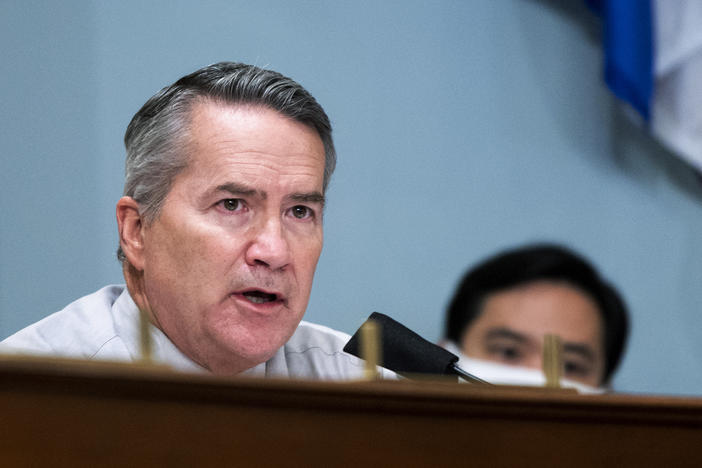