A political reckoning in Sri Lanka as economic crisis grows 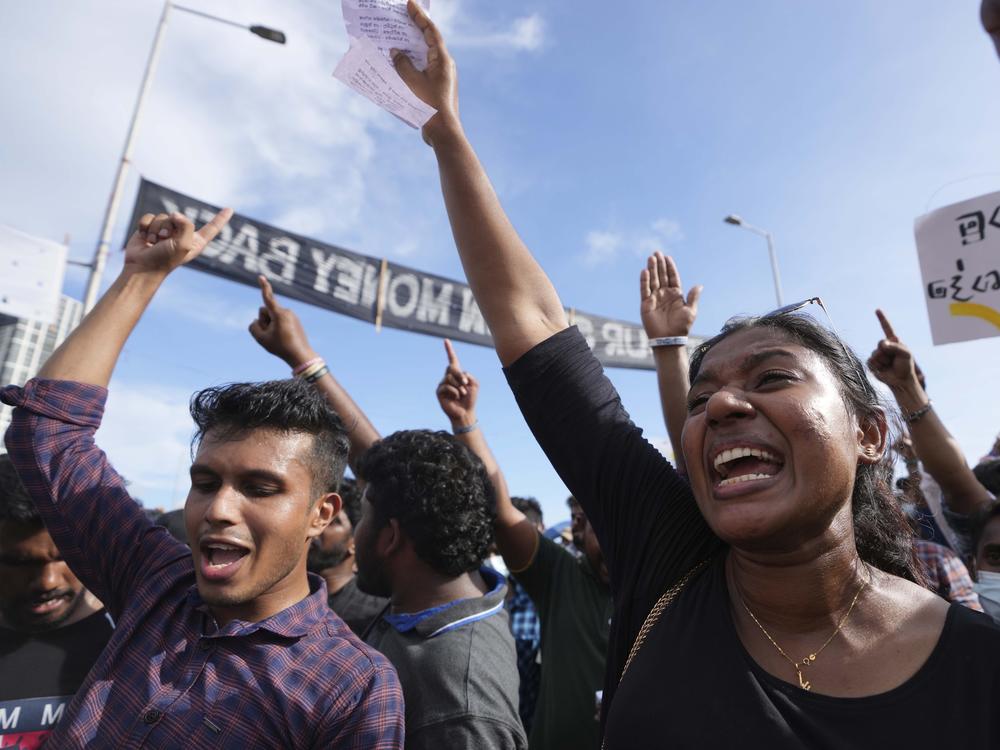 People shout slogans against the government during an ongoing protest outside president's office in Colombo, Sri Lanka, Saturday, April 23, 2022. / AP

Now he is one of thousands who, for weeks, have protested outside the president's office, calling on Rajapaksa and his brother, Mahinda, who is prime minister, to resign for leading the country into its worst economic crisis since its independence from Britain in 1948.

With the island teetering near bankruptcy, Fonseka, who owns a small garment business in the capital, Colombo, has resorted to spending his own savings to pay the salaries of his 30 employees. But he knows he will soon have to let them go and is clear about who is to blame.

"All of us thought we made the correct decision (to elect Rajapaksa), but we've realized we were wrong. We should have the backbone to tell people, and the world, that we made a mistake," he said.

In recent weeks, protests have erupted across the country demanding that Rajapaksa quit.

The protests highlight the dramatic fall of the Rajapaksas from Sri Lanka's most powerful political dynasty in decades to a family grasping to retain power. Despite accusations of atrocities during the civil war, Gotabaya and Mahinda, who was previously president, remained heroes to many of the island's Buddhist-Sinhalese majority and were firmly entrenched at the top of Sri Lankan politics before the revolt by previous supporters like Fonseka.

"The pendulum has swung from 'it's all about the Rajapaksas, they are the people who saved this country,' to 'it is because of the Rajapaksas that the country is now ruined,'" said Harsha de Silva, an economist and opposition lawmaker.

The unravelling of Sri Lanka's economy has been swift and painful. Imports of everything from milk to fuel have plunged, spawning dire food shortages and rolling power cuts. People have been forced to queue for hours every day to buy essentials. Doctors have warned of a crippling shortage of life-saving drugs in hospitals, and the government has suspended payments on $7 billion in foreign debts due this year alone.

"The Rajapaksas, like an octopus, have held on to every aspect of public life in Sri Lanka," de Silva said. "They have been running it as if it was their kingdom. They wished and they did –- that's how it was and people were with them."

President Rajapaksa has defended his government, partly blaming the pandemic and Russia's war in Ukraine. "This crisis was not created by me," he said in a speech last month, adding that his government was working hard on solutions. They include approaching the International Monetary Fund and World Bank for assistance, after repeated calls to do so.

But as protesters seethed, the president and prime minister have changed tact in recent weeks. They have admitted to mistakes they made that exacerbated the crisis, such as implementing a short-lived ban last year on importing chemical fertilizers that badly hurt farmers and conceding that they should have sought a bailout sooner.

Influential Buddhist monks have urged Rajapaksa to form an interim government under a new prime minister, signaling a further decline in the family's image as protectors of the country's 70% Buddhist-Sinhalese majority. Some observers say it's too soon to measure how much support for the Rajapaksas has fallen among their hardcore base, but for many their response has been too little and too late.

"There is now recognition across the government of several missteps, but it's one that's come at a huge cost to the people," said Bhavani Fonseka, a senior researcher at the Colombo-based Center for Policy Alternatives.

The Rajapaksas were a powerful land-owning family which for decades dominated local elections in their rural southern district, before rising to the helm of national politics in 2005 when Mahinda was elected president. He remained in power until 2015, overseeing the end of the civil war against ethnic Tamil rebels in 2009, before losing to the opposition led by his former aide.

Suicide bombings that killed 290 people on Easter Sunday in 2019 paved the way for the Rajapaksas' return, this time as Gotabaya launched a high-pitched nationalist campaign that tapped outrage and disillusionment with the previous government over the attacks.

He vowed a return to the muscular nationalism that had made his family popular with the Buddhist majority, and also to bring the country out of an economic slump with a message of stability and development.

Tourism had dropped sharply after the bomb attacks and Sri Lanka needed badly to boost revenue to service a slew of foreign loans for splashy infrastructure projects. Some involved Chinese money and were commissioned under his brother's presidency, but had failed to create profits, instead collecting debt.

Just days into his presidency, Rajapaksa pushed through the largest tax cuts in Sri Lanka's history to spur spending even as critics warned that it would shrink the government's finances. According to Nishan de Mel, executive director of Verité Research, Sri Lanka's tax base fell by 30%.

"When you do something like that, you have some kind of internal analysis or document that shows why these cuts could help the economy. There was nothing of that sort," de Mel said.

The move triggered immediate punishment from the global market as creditors downgraded Sri Lanka's ratings, making it impossible for it to borrow more money as its foreign exchange reserves continued to dwindle. Then the coronavirus hit, further crushing tourism as debts snowballed.

Analysts say the Rajapaksas' response to the economic challenges underscored the limitations of their strongman politics and their family's near-monopoly on decision making, heavily relying on the military to enforce policy and passing laws to weaken independent institutions.

Three other Rajapaksa family members were in the Cabinet until early April, when the Cabinet resigned en masse in response to the protests.

But many fear that things will only get worse before improving. A divided and weak opposition without a majority in Parliament has kept the Rajapaksas in power. An IMF bailout could see austere measures intensifying hardships for people before there is relief.

Meanwhile, the focus remains on the protests, which are drawing people across ethnicities, religion and class. For the first time, middle-class Sri Lankans have taken to the streets in large numbers, Uyangoda said.

They include Wijaya Nanda Chandradewa, who joined the crowd outside the president's office on Saturday. A retired government employee, Chandradewa said he fell for Rajapaksa's promise to rebuild a Sri Lanka scarred by the 2019 bombings.

"He said there will be one country and one law — now there is neither the law nor the country," Chandradewa said, adding that the only option now is for Rajapaksa to quit.

"He showed us a fairyland and cheated us and misled us," he said. "We have to fix our mistakes and build a system to bring in the right leader." 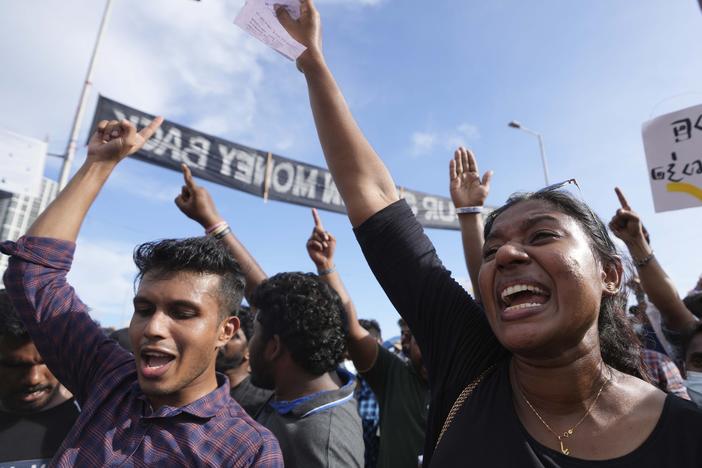 A political reckoning in Sri Lanka as economic crisis grows

The ongoing protests highlight the dramatic fall of Sri Lanka's most powerful political dynasty in decades to a family grasping to retain power. 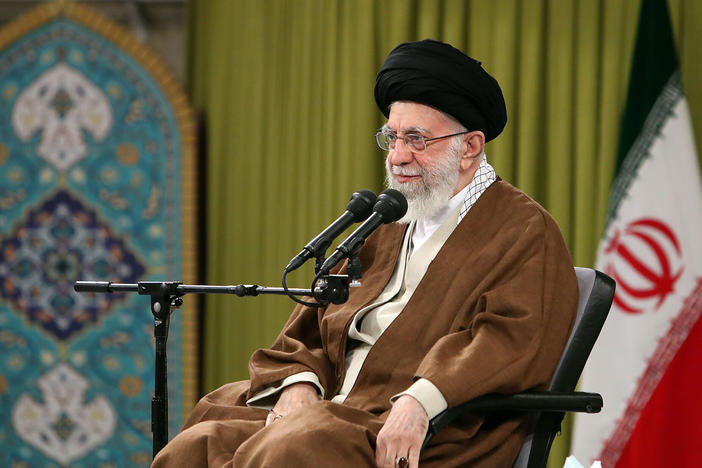 The estimate from a military official of people dead from protests is considerably lower than the toll reported by a U.S.-based group that has been closely tracking the protests. 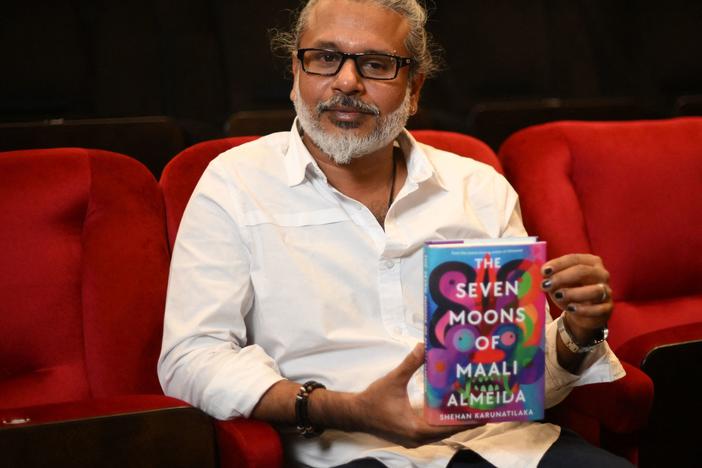 The prestigious award was given to The Seven Moons of Maali Almeida, which the judges hailed as "a searing, mordantly funny satire set amid the murderous mayhem of a Sri Lanka beset by civil war."