Disconnected: Some Masters fans 'jonesing' for their phones 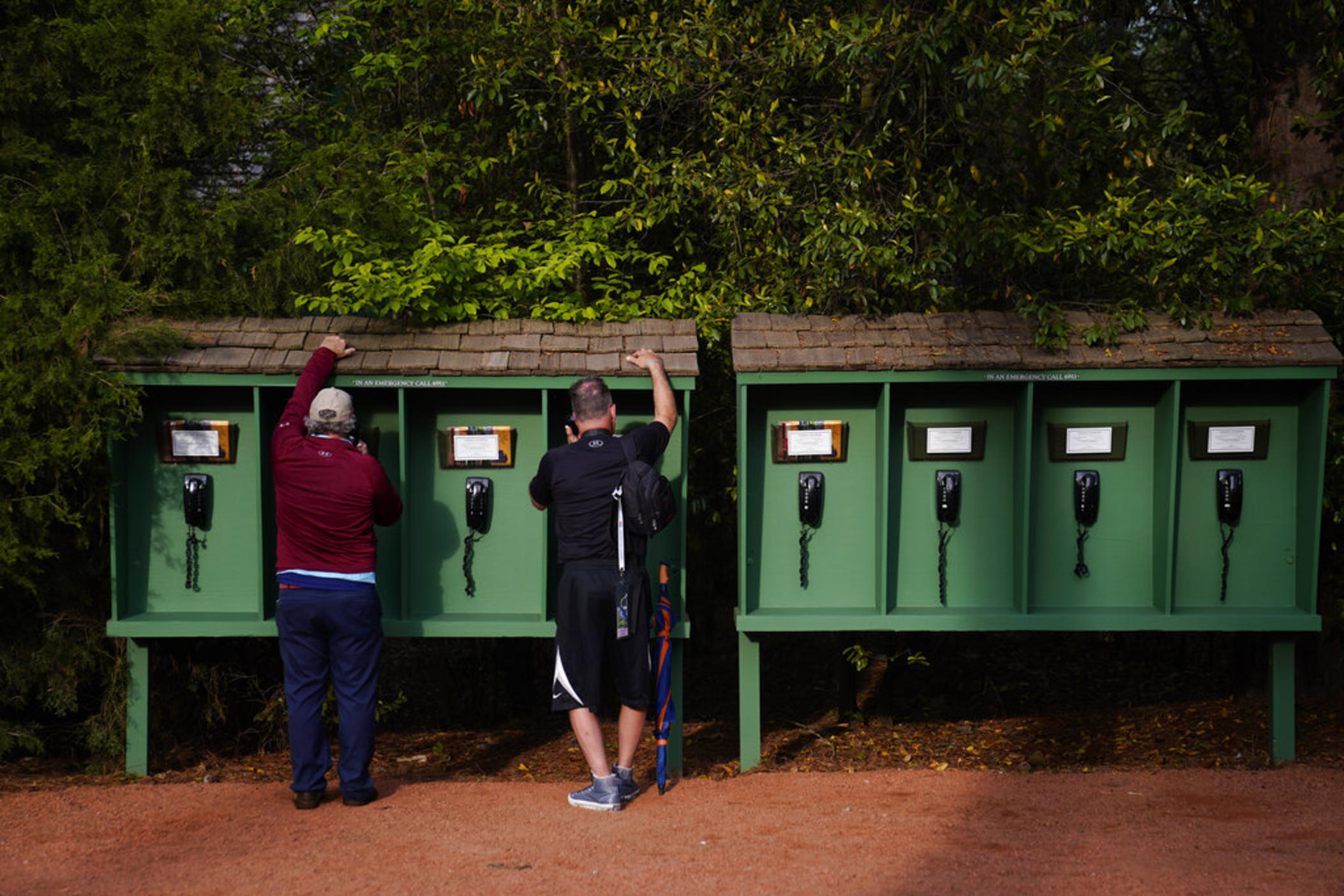 Caption
With mobile phones prohibited on the Augusta National Golf Course, spectators use phones provided by the club near the seventh hole during a practice round for the Masters golf tournament on Tuesday, April 5, 2022, in Augusta, Ga.
Credit: AP Photo/Jae C. Hong

Mary Gray hadn't even made it all the way to the first tee at Augusta National Golf Club when the reality of the protective bubble that settles over the course during Masters' week fully set in.

She knew the club's "no phone policy" and dutifully left her cell in her group's rental car. Standing near the massive leaderboard to the right of the first fairway before Tuesday's practice round and clutching a disposable camera that took multiple trips to a drug store to secure, Gray kept reflexively tapping her pocket.

She's not alone. Part of the Masters' enduring appeal is its timelessness.

"It's like a different world when you walk through the gates," said 21-year-old Tim Nelson of Atlanta, clad from head to toe in Masters swag while watching Tiger Woods chipping 30 yards away.

A world that predates selfies and social media and all the other daily distractions that fit in the palm of our hands. To step onto the perfectly manicured grass is like boarding a 352-acre time machine. It comes with its perks. Such as azaleas in bloom. Pimento cheese sandwiches that run just $1.50 and a chance to truly unplug for a few hours.

Still, the Fear Of Missing Out is real. Besides, what good is posing for a group picture at any number of Augusta's iconic spots if you can't immediately humble brag about it on the social media platform of your choosing?

"I know, right?" said Melissa McDonald of Athens, Georgia, as she posed for a picture being taken by her fiancee Max Jensen near the second green. "I think it's cool that it's sort of old school but at the same time, you're so used to just being connected at all times."

That connection to the outside world is put on hold at the nursery Bobby Jones turned into one of the most storied courses on the planet. The initial angst that Gray felt as she made her way from the entrance to the course didn't exist for Kelly Poff as she stood to the side of the eighth fairway waiting for Brooks Koepka to blast one on the par-5.

Poff's family purchased a Go Pro on Monday explicitly so they could bring it to Augusta. At first, Poff admitted there was an "Oh my God, I can't have my phone" moment. A couple of hours into her first session along the ropes, her anxiousness had eased.

"It's kind of nice," said Poff, who is from Orlando, Florida. "You're really sort of away from it. Now it's like, you don't even think about your cell unless you want a selfie."

While the Poffs splurged for something a little fancier than the kind of disposable technology last seen on tables at wedding receptions nearly a generation ago, Larry Diedrich fished into the back of a drawer for a waterproof digital camera that only sees the light of day during family trips to Hawaii.

"I had to remember to recharge it," said Diedrich, who made the short two-hour trip from the Hilton Head, South Carolina, area.

Diedrich spent 20 years as a volunteer at the John Deere Classic, which basically has no restrictions, just like every other golf tournament on the planet.

Searching for that charging cable was a small price to pay for the opportunity to snap a couple of action shots as players made their way to the fifth green.

A few holes away, Zach Mendill of Columbia, South Carolina, reveled in the chance to have the mostly undivided attention of his two sons as they navigated their way from the grandstand behind the eighth green to the ninth tee box.

"See boys, this used to be the 18th hole," Mendill said as Trent and Anthony looked on silently underneath their blue-and-white Masters baseball caps.

No oohs. No aahs. But no telling them to put the hand-held device of their choice down either. It's a tradeoff Mendill will happily live with.

"It's nice to have a couple hours where it's just me and them," he said.

Augusta isn't entirely cut off. There is a bank of touch-tone phones across from the gift shop and a few rows of them adjacent to a concession stand near the 18th tee, with instructions on how to use your credit card so you can give someone a shout just to tell them where you're calling from.

"It's kind of a 'I'm here and you're not,' situation," said Tom Miller of Charlotte, North Carolina, who called his brother to gently rub it in.

There are its drawbacks. Gray's group of four became a group of three when they were separated at some point between the parking lot and the course. No phone means no quick text for a place to meet up. While she'd like to see a dedicated area where phones could be used, she understands it's out of her hands.

You don't come to Augusta to spend it with your head down scanning Twitter. You come for the sights. The smells. The roars. The tradition. The chance to be a part of something at a place intent on keeping its promise to deliver an experience unlike any other. 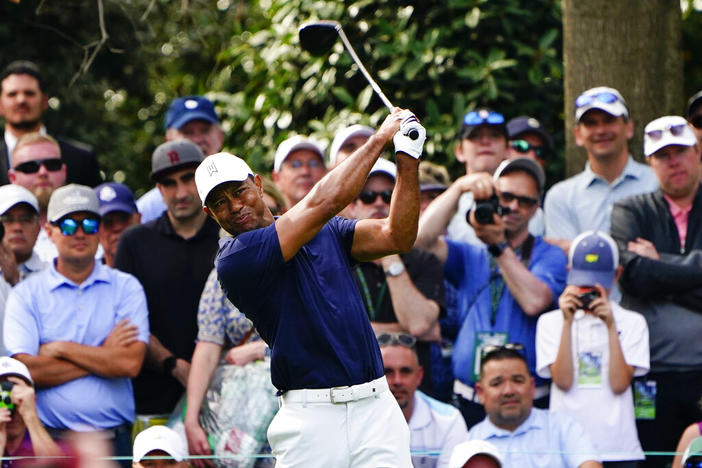 Tiger Woods says, for now anyway, he's planning to play this week in the Masters, a little more than a year after he nearly lost a leg in a car crash. The five-time champion at Augusta National made the announcement Tuesday morning. 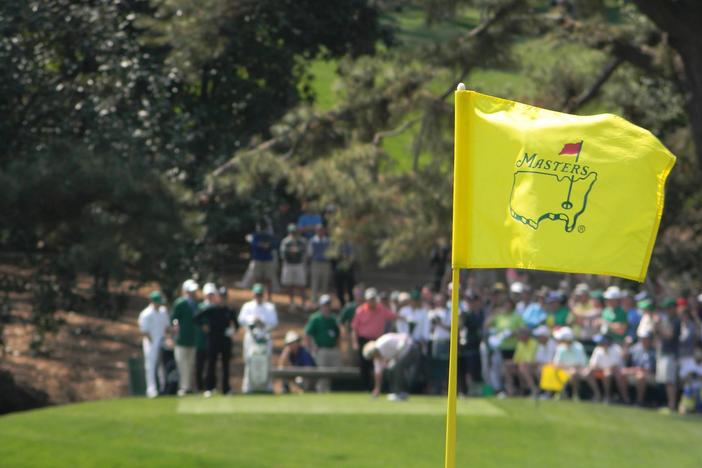 Comeback season: Tiger, the Masters, and Augusta return to the international stage 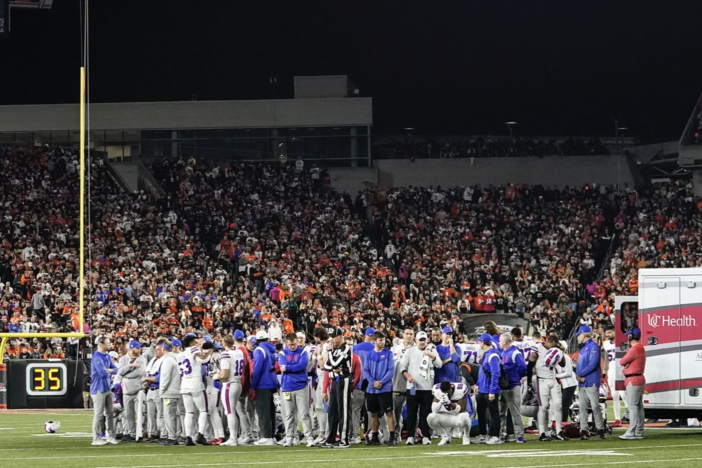