Is breeding bulldogs cruel? Animal groups debate how to make them healthier 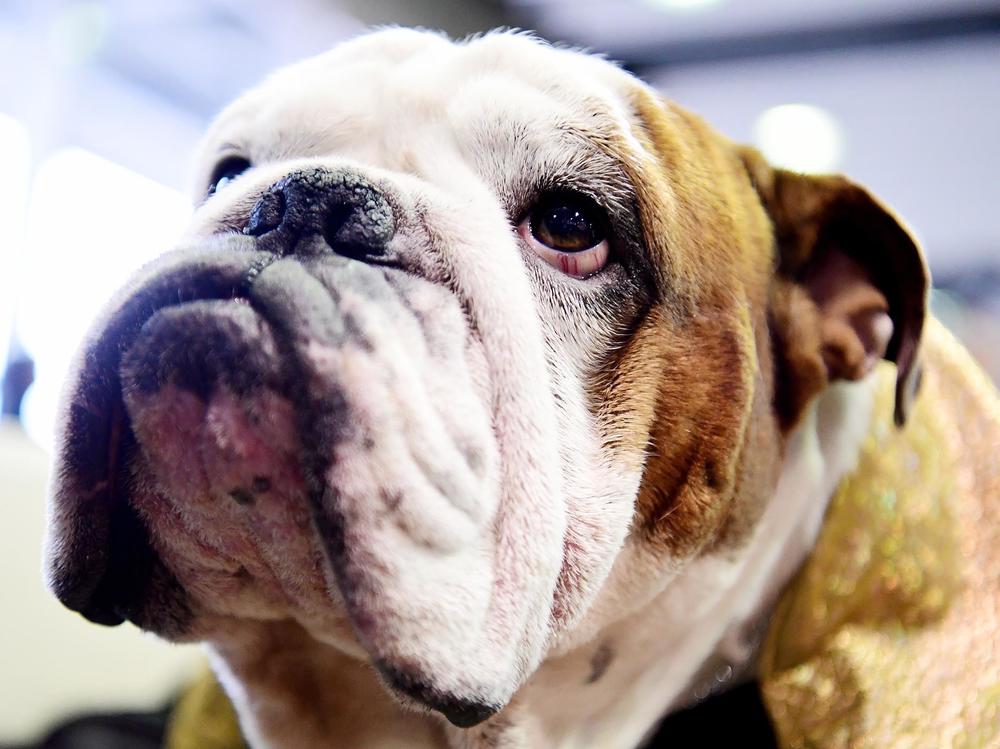 With flattened faces, wrinkles and short airways, bulldogs are prone to health problems. A court in Norway banned the breeding of bulldogs unless it's to improve the breed's health.

Bulldogs and French bulldogs are among the most popular breeds in the U.S. But according to a growing body of evidence, that distinctive bulldog look also leads to serious health problems for many dogs.

In late January, a court in Norway banned the breeding of bulldogs, after an animal welfare group argued that chronic inbreeding and an exaggerated body shape was causing suffering for many dogs. Their flattened face and shortened airway can cause respiratory issues, sometimes requiring surgery. The dogs are also prone to skin and spinal problems.

The court ruled that breeding the dogs should stop, unless it's to improve the health of the breeds or to bring in new genetic material. The ruling is being appealed currently, but it's sent shock waves across the world, including the U.S.

Some veterinary and animal rights groups argue that bulldog breeders should be required to use genetic and health testing, so dogs with serious problems aren't bred. They say breeding to change the body shape of bulldogs, like making their snouts longer, could also alleviate some health issues.

Bulldog breeding groups adamantly oppose changes, arguing that irresponsible breeders are causing health issues for dogs. Still, recent genetic studies show that bulldogs are so inbred, there may not be enough genetic diversity in the breed to eliminate some health problems. Under purebred dog rules, bulldogs can only be bred with other bulldogs, limiting the overall gene pool.

As an emphatic bulldog owner, Colleen Thilgen's Oakland home is dedicated to them. Pictures of her three bulldogs, Rudy, Abby and Mojo, adorn the walls, as well as her Instagram.

"I absolutely love the breed," she says. "I can't imagine not having one. Or three."

Having had six bulldogs over her lifetime, Thilgen says the dogs require a very involved owner. For starters, their distinctive wrinkles need daily maintenance. 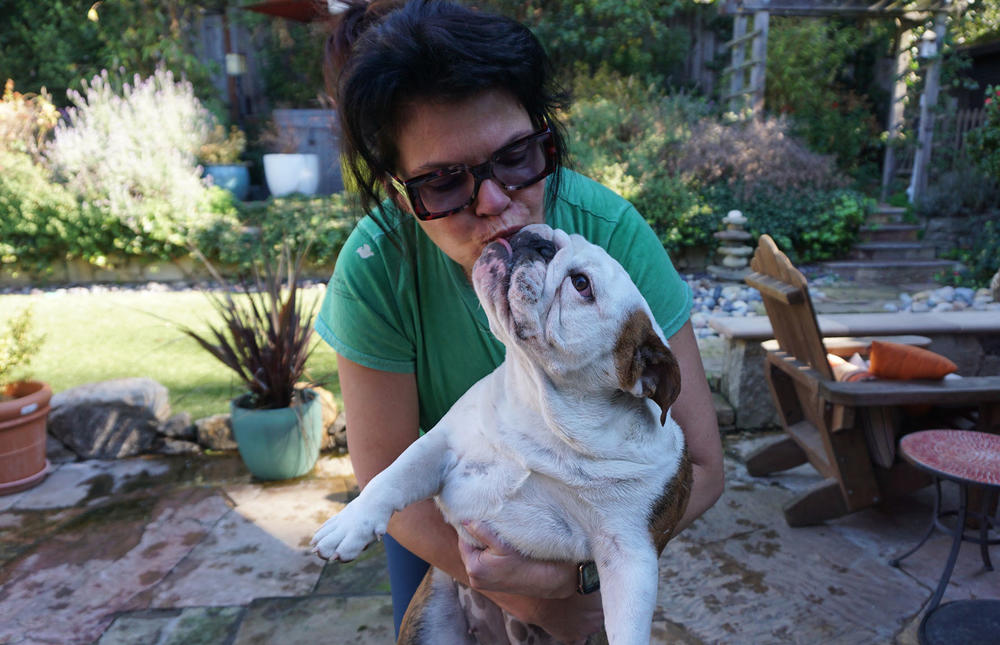 Colleen Thilgen has three bulldogs at her home in Oakland, Calif. and says due to their health issues, bulldogs require an involved owner.

"See how she has this big, wide, deep fold," she points out, holding up Abby. "We have to clean it almost everyday since it gets infected." The same is true for their floppy ears.

Their flattened faces also mean the dogs have a shortened airway, which can cause breathing problems. Dogs cool themselves by panting, which bulldogs are less efficient at, putting them at risk of heat stroke.

"They cannot sustain heavy heat," Thilgen says. "We would never walk them if it was over 80 degrees. You just have to be really careful cause they do have that airway."

Bulldog breathing problems can be so severe that some dogs require surgery. One of Thilgen's dogs had its nasal openings widened. That was after a vet advised against surgery to open his airway by cutting back his soft palate, a surgery that's common for bulldogs. The dog was already dealing with a painful overgrowth of bone in its jaw.

The litany of health problems – and vet bills – can be a shock to some bulldog owners. The root cause of many, some veterinarians say, is simply due to the bulldog's compact body shape.

"How I describe this to patients is that it's like moving from a four bedroom house with all the furniture into a one bedroom apartment, but you have all the same furniture," says Dr. Erik Olstad, a veterinarian and assistant professor at the UC Davis School of Veterinary Medicine.

Olstad says he sees bulldogs with bone malformations in the neck and back. Their broad chests and short bodies also mean the majority of bulldog puppies are delivered by Cesarean section.

"They really can't give natural birth anymore," Olstad says. "But the monetary incentive for these breeders is so high, that they can justify these added costs. These puppies can sell from anywhere from three to six thousand dollars per puppy." 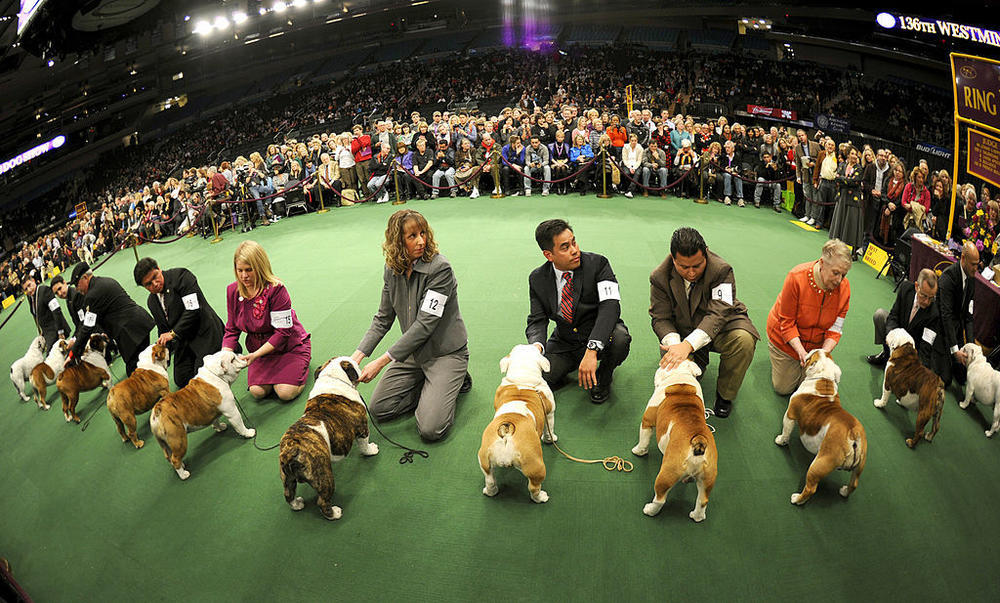 Purebred bulldogs, like these at the Westminster Kennel Club Annual Dog Show in 2012, can only breed with other bulldogs under American Kennel Club rules, limiting the overall gene pool.

A number of studies show that flat-faced dogs, including pugs, French bulldogs and Cavalier King Charles spaniels, are less healthy than dogs with longer snouts. Brachycephalic breeds, as they're known, are more prone to respiratory, eye, skin and spinal problems. A 2017 study by Nationwide insurance found even when breathing problems and other brachycephalic-related issues are discounted, flat-faced dogs are still more unhealthy on average. Their owners are around twice as likely to submit claims for skin cancer, pneumonia and heat stroke.

"I look at it from their quality of life and it causes some concern for me ethically," Olstad says.

Last year, animal rights activists with the Norwegian Society for the Protection of Animals asked the courts to weigh in on whether breeding the dogs was ethical under the country's strong animal welfare laws. The case focused on both bulldogs and Cavalier King Charles spaniels, which suffer from heart problems and head pain due to their small skull size.

Roaldset, the group's CEO, says their goal in bringing the case wasn't to eliminate the dog breeds, but to start a serious conversation about how to make them healthier. That includes using genetic testing to avoid breeding unhealthy animals, as well as potentially changing the body shape of bulldogs, like making it less compact and giving the dog a longer snout. In December, the Australian Veterinary Association released new guidance recommending that dogs with short muzzles, spinal problems and other health issues should not be bred.

"We can now have a new discussion: how can we breed dogs better?" Roaldset says. "We need to do it differently. What we've done up til now is not good enough. We need to do so much better for our dogs."

The judge ruled that breeding the dogs should stop, unless it's to improve the health of the breeds or to bring in new genetic material. The ruling is being appealed currently, but it's sent shock waves across the world, including the U.S.

In the U.S., proponents of purebred dogs have criticized the emerging international push to change current breeding practices. 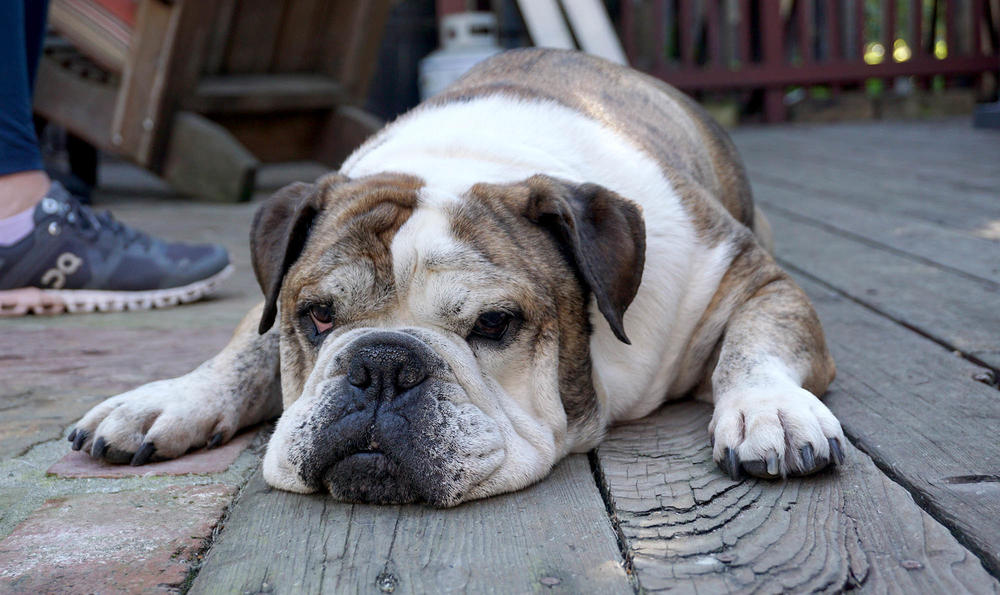 "The American Kennel Club is not in favor of anti-breeder legislation or courts interfering with breeders' efforts to preserve breed traits and improve the health of their dogs," the group said in an emailed statement. "We believe that breeding should be done responsibly with the health and welfare of the dogs being the highest priority."

In the U.S., the look of purebred bulldogs is determined by the Bulldog Club of America. It controls the breed standard, which specifies that bulldogs should be "kind, resolute and courageous," as well as their physical characteristics, like having a "very large" skull and "very short" muzzle.

"We want a balance of a healthy, athletic dog," says Jeff Ryman, president of the Bulldog Club of America. "That's what the standard maintains and has for 100 years."

Ryman blames bulldog health problems on irresponsible breeders and says the club has a list of health tests that it encourages breeders to use to improve the health of their bulldogs. He says the club sees no need to change the physical appearance of bulldogs.

Still, recent scientific studies show that eliminating bulldog health problems through good breeding choices may not be possible, because bulldogs today are too inbred. Researchers at UC Davis found in 2016 that bulldogs lack genetic diversity, in part because they descended from a small group of founding animals.

Without a variety of genes, it's difficult for breeders to fully eliminate health problems. Another recent study found that bulldog genomes are so similar, it's like all bulldogs are more closely related than if a brother and sister had offspring.

"I don't think it's the breeders themselves," says Danika Bannasch, a veterinary geneticist at UC Davis. "They're not necessarily trying to breed unhealthy dogs. It's the breeds themselves that are unhealthy, and there isn't much that they can do about it within the context of the purebred breed."

Mixing in genetic material from other breeds generally isn't permitted under purebred dog rules. Most breeds have a "closed studbook," where individual dogs are registered and can only breed with other registered dogs in the same breed to maintain their purebred status.

In some cases, crossbreeding projects have helped reduce health problems in some breeds. Dalmatians are prone to getting bladder stones, so in the 1970s, a breeder crossed the dogs with pointers and then returned to breeding them with only Dalmatians. The project remained controversial for decades, until the AKC finally accepted the dogs in 2011.

The U.S. bulldog association says it has no plans to support something similar. "As a responsible Bulldog Club of America breeder, we are breeding healthy dogs, so there is no reason to do any crossbreeding," Ryman says.

"Is it really ethically acceptable for us to control the breeding in such a manner that all bulldogs will be predisposed to serious illness?" says Roaldset. "I think we just have to accept that a better life also means they have to look a bit different."

In the U.K., the Kennel Club released new standards for French Bulldogs, specifying that the dog's nostrils should be visibly open and that its muzzle should be "well-defined." In 2009, the club amended its bulldog standard to say that too many wrinkles are unacceptable. In Switzerland, a breeder created a new breed known as Continental bulldogs to help alleviate some of the health issues by elongating the dog's body. So far, American dog clubs haven't made similar changes. 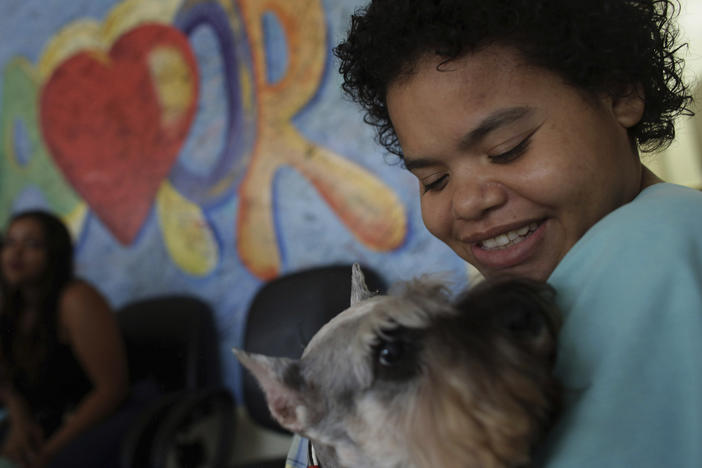 Therapy dogs can help relieve pain in the ER

They have offered comfort at nursing homes, schools — even disaster sites. Now, a study shows that a 10-minute visit from therapy dogs can help relieve emergency room patients' pain. 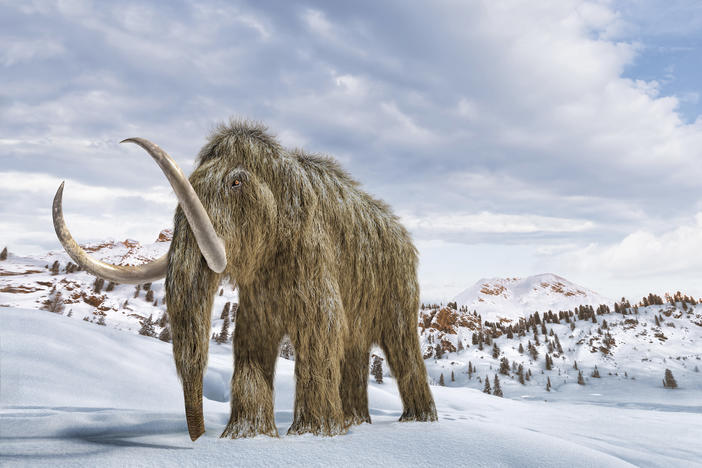 Scientists Say They Could Bring Back Woolly Mammoths. But Maybe They Shouldn't 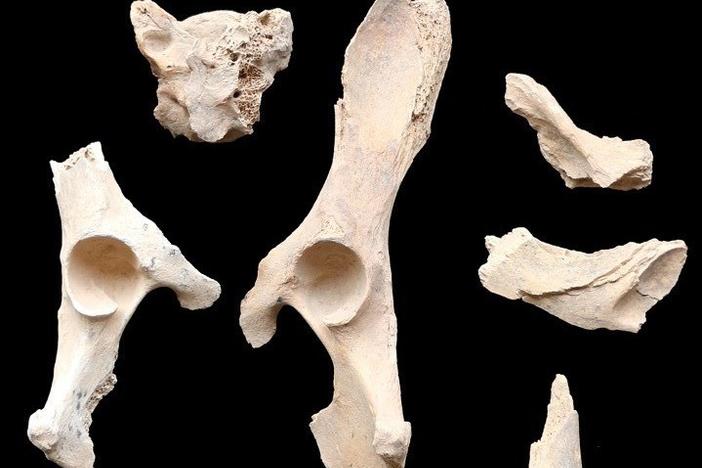 As archeologists in Saudi Arabia excavated an ancient tomb last year, they were surprised to find what's believed to be the earliest example of dog domestication in the region.