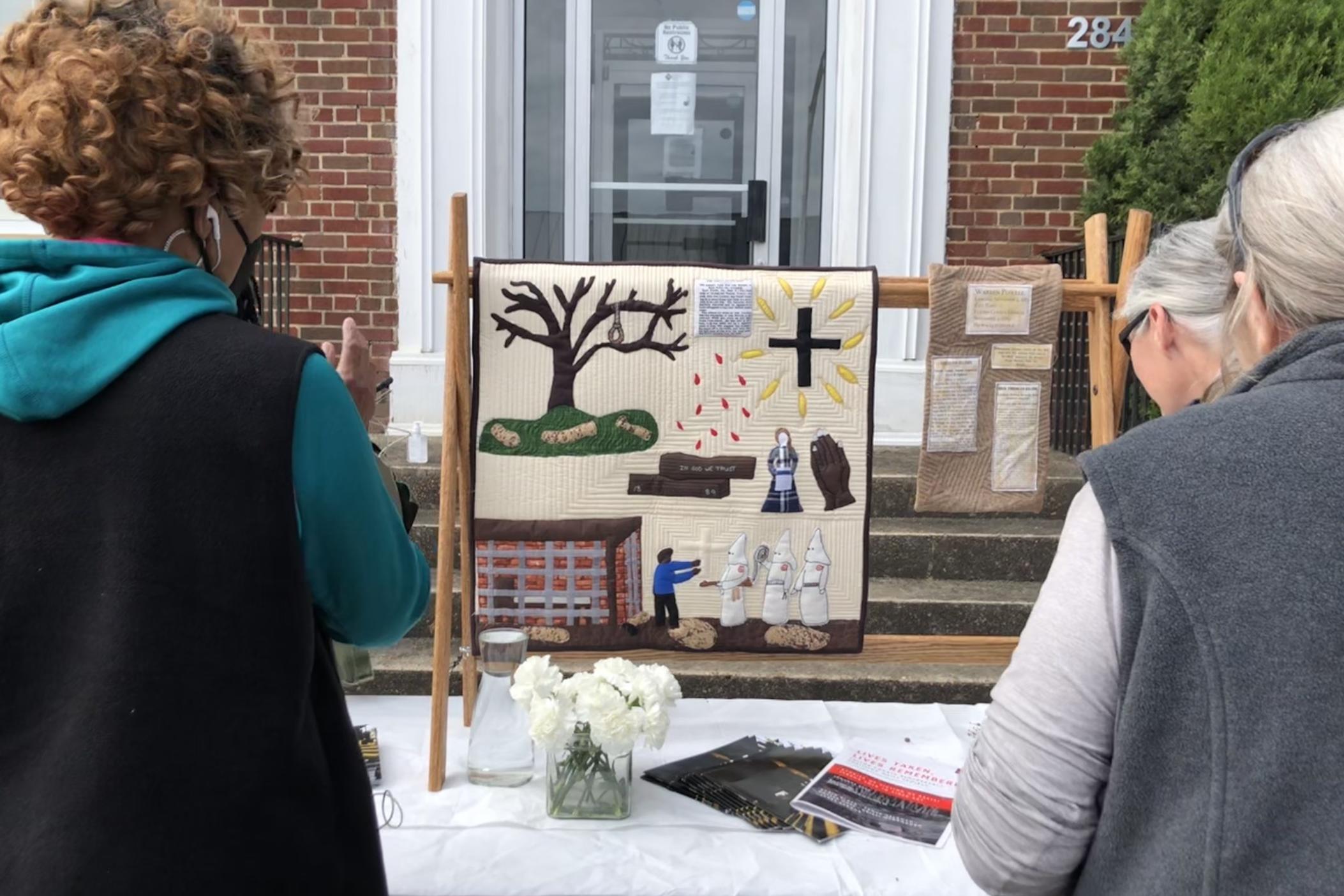 Not much is known about Warren Powell. He lived in East Point, Ga., over a century ago. He was Black.

And we know that on Sept. 4, 1889, the 14-year-old Powell was abducted from the town’s jail and later lynched at the hands of a crowd of white men. His body was never found.

Powell is one of at least 35 African American people lynched in Fulton County between 1877 and 1950, according to research by the Montgomery, Ala, nonprofit Equal Justice Initiative. The group documents 595 lynchings in Georgia motivated by racial hatred in that same period.

In recent years, volunteer groups have sought to memorialize the Black lives like Powell’s taken by acts of racial violence in local history.

In February, the Fulton County Remembrance Coalition held memorials in East Point, Ga., to remember Powell and Zeb Long, the pair of lynching victims documented by the EJI’s research as having happened in the city.

For Powell, the memorial was held outside the building that once housed the town's post office and jail. After volunteers with the Fulton County Remembrance Coalition read a historic narrative of Powell’s life and death, attendees of the memorial were invited to participate in the ceremony.

Forming a line, one-by-one those in attendance used their hands to scoop soil collected from the approximate location of Powell’s murder into a large glass jar, which will go on display in a nearby municipal building. Together, with a second jar containing soil from Sumner Park near where Long was murdered, the pair of jars will serve as a lasting marker to commemorate a violent chapter of local history.

We may not know much about either Long's or Powell’s lives, Fulton County Remembrance Coalition's Allison Bantimba said, but honoring the pair is important because it connects the past to the modern day.

“Pointing these individuals out — saying their names, sharing their stories, collecting soil and putting up markers and making sure that everybody that walks by this intersection sees that Warren Powell was a young boy that lived and played and went to school in this area — is important,” Bantimba said after the ceremony. “So young kids that are experiencing some similar sort of injustices understand that their story doesn't happen in a vacuum.”

Next, volunteers with the Fulton County Remembrance Coalition plan on placing historical markers in the city.

These efforts in Fulton County are part of a larger movement, in collaboration with the EJI, to commemorate what the nonprofit calls “racial terror lynchings” across the South from the Reconstruction era through the postwar period. The EJI defines racial terror lynchings as acts of violence committed against minority groups distinguished by a lack of criminal prosecution.

The nonprofit documented thousands of murders in the South and beyond which they say created an atmosphere of pervasive fear in minority communities and reinforced a legacy of racial inequality that has never been addressed in America.

In Georgia, community groups in Troup, DeKalb, Gwinnett, Fayette and Walker counties have partnered with the EJI to put up historical markers or hold events. In Forsyth County, volunteers with the Forsyth County Remembrance Coalition held a panel discussion last month with the descendants of Black families who were forced out of the area during its 1912 racial cleansing.

Breana Lamkin, a project manager with the EJI, said part of the goal is to reshape the American landscape by creating public monuments and markers to help change the way communities remember this history.

“Without that, the silence just kind of breeds inequality and it breeds injustice,” Lamkin said. “It kind of gives air to the things that we're hoping to fight against. Without doing that, we will never get to a better place or a place of repair in this country.”

The study of how different countries and societies remember their history is Jelena Subotic’s specialty. She is a professor of memory politics at Georgia State University, an interdisciplinary field drawing on history, sociology, anthropology, ethnography and museum studies.

She said memorials can serve as an important acknowledgement of history for marginalized groups who have suffered at the hands of the wider society in the past.

“Having a marker, having a memorial, having a monument is primarily a sign of acknowledgment that what they know happened is now officially recognized as having happened," Subotic said. “Acknowledgment of a crime or a human rights violation or abuse is the first and very important meaning of a memorial, monument or marker."

Subotic's primary research covers Holocaust remembrance and the ways European societies remember genocide. She said Americans have much to gain from being more open to truthful conversations about the country's past.

“I think the best the United States can do is to show some more openness to learning from other countries and learning about how beneficial it is for society to face its past,” she said. “How beneficial it is to create social cohesion ... to take accountability for crimes of the past, not in terms of punishing people and putting people in jail, but in terms of understanding the political and historical context in which crimes and abuses occurred and what we can learn to improve our present and hopefully to look for a better future.”

Sylvester Pierce, a resident of East Point, attended the Feb. 26 memorial for Warren Powell with friends and family. Pierce said creating historic markers in public spaces are important because, otherwise, the history might be erased.

"Georgia is notorious for removing history, tearing down buildings, paving it over and acting like nothing happened," Pierce said. "So when you have a marker actually put up and people who are in this community 20, 30, 100 years from now, they will walk pass these same spaces where a new building is and see what actually happened here."

For the memorial's organizers, the work is about much more than remembering the violence. After the end of the ceremony for Warren Powell, organizer and writer Ann Hill-Bond said we need to remember Black lives taken by racial violence beyond the circumstances of their last day of life.

“We also want to celebrate the life of the person, because they weren't just the victim, they were a person,” Hill-Bond said. “This was a 14-year-old boy, right? He had friends. He had all of those things that make us people with lived experiences.”