With the return of Mardi Gras marching bands, New Orleans' streets are full of magic 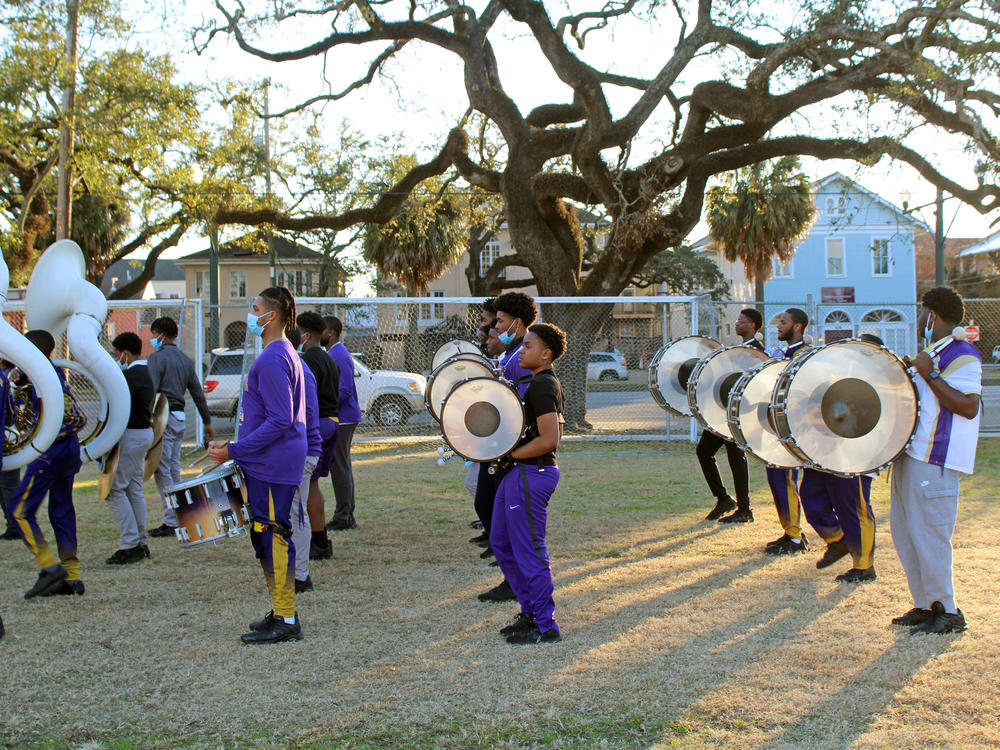 Warren Easton Charter High School's marching band members line up in formation. Their instruments, among many, include sousaphones, cymbals, and a drum section with snare, tenor and bass drums. / WWNO

Mardi Gras parades are back in New Orleans after a pandemic hiatus. And over the last week and a half, the city's beloved high school bands have returned to the streets.

Like a lot of native New Orleanians, Muhaimin lives for Mardi Gras. There's a recurring moment during parades that she describes as pure magic.

It's when the full band isn't playing, and just the snare drums are keeping beat. You can hear the taps and scrapes of dancers' shoes as they walk down the street. Then, all of a sudden, the shrill cry of the drum major's whistle breaks the silence. The drummers roll off the song, and the full band starts to play. Muhaimin gets chills just thinking about it. 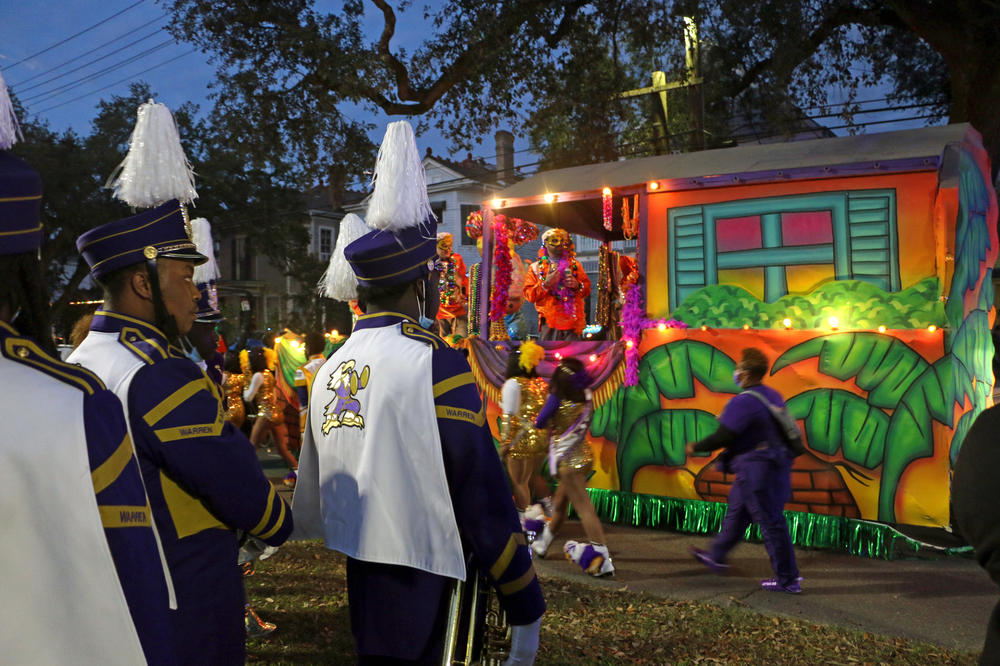 Members of the Warren Easton band watch as floats line up at the start of the parade route. / WWNO

There were no moments like this last year, because there were no parades. And while that's made the return of Mardi Gras this year all the more exciting, the interruption also had consequences.

The coronavirus had just arrived in the United States when parades rolled in 2020, and Carnival that year was one of the country's first super-spreader events.

While Mardi Gras technically wasn't canceled last year, it was a pretty sorry affair. There were no parades, no live music and most people stayed home. This year, while a number of COVID-19 restrictions including mask and vaccine mandates are still in place, celebrations are largely back to normal.

While band culture is still big in New Orleans, band directors say it's been stunted in recent years, and the pandemic didn't make things any better. 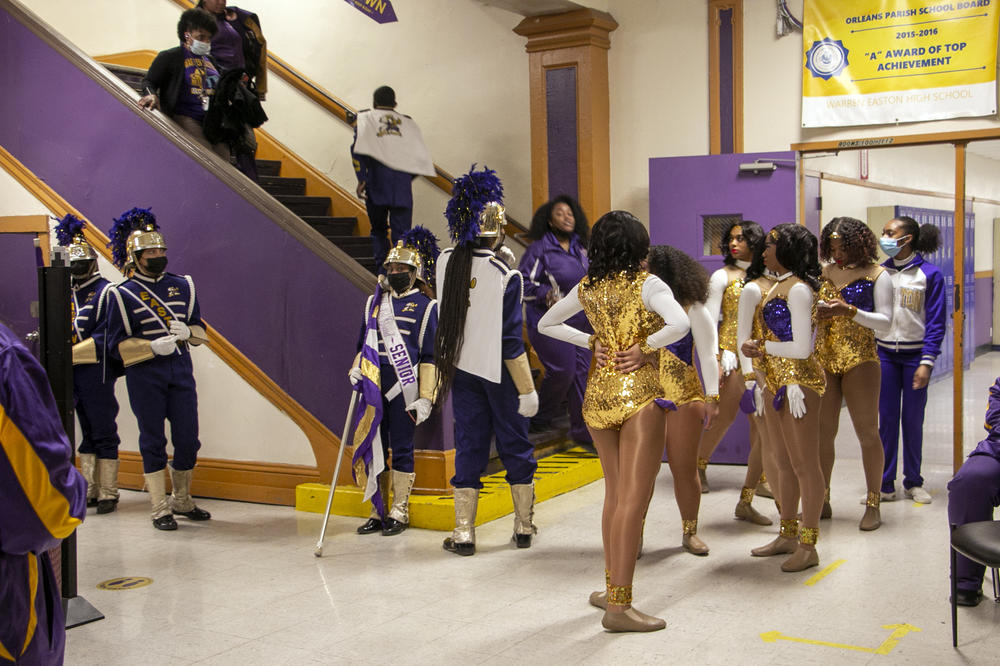 Warren Easton's color guard, majorettes and flag twirlers get ready to head to the school's first parade of the year. / WWNO

In New Orleans, all public schools are now charter schools after Hurricane Katrina decimated the existing school system in 2005, allowing for a swift transformation. There's no standard arts program across the system, and some elementary and middle schools don't provide any music instruction at all.

Muhaimin says when she was growing up in the late '80s and early '90s, music was everywhere. Everyone learned how to play an instrument in elementary or middle school, and the bands were huge.

"A lot of places are not supporting arts the way they should, music education in particular," Muhaimin says.

While some high schools, such as Warren Easton, still have robust music programs, their incoming freshmen sometimes have little to no band experience. Nowadays, the bands are smaller, especially this year.

That's because Mardi Gras parades are one of the most important recruitment opportunities bands have. Over the last two years, students have graduated and fewer new students have come to take their place. 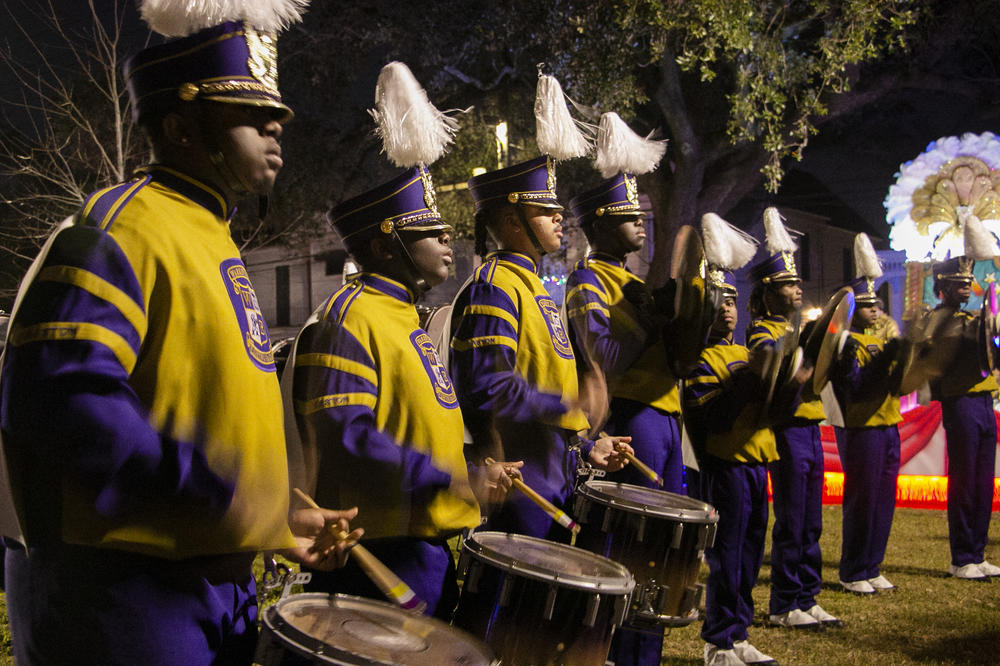 The snare drummers and cymbal players of Warren Easton battle another band while waiting for their first parade of the season to start. / WWNO

Warren Easton's 60-piece band is 25% smaller this year than it was pre-COVID. Muhaimin says that, in addition to recruitment issues, the band lost members who dropped out during the height of the pandemic when bands weren't allowed to practice.

Smaller bands, like the ones in New Orleans this year, need to be skillful in order to produce a full sound with fewer musicians. Even a single mistake stands out, so everyone has to know their parts perfectly.

The band at Frederick A. Douglass High School had no members when Jordan Harper took it over at the start of the school year. Since then he's recruited 50 students, many of them first time musicians. 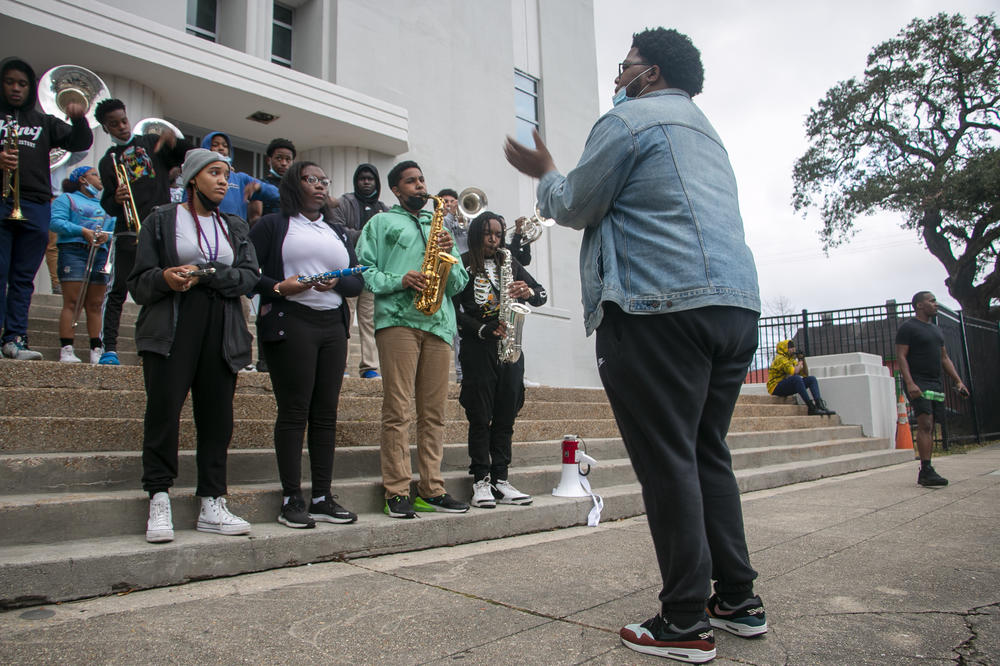 Frederick A. Douglass High School band director Jordan Harper conducts. At the beginning of this school year, the band didn't have any members; now, there's 50. / WWNO

"If everybody holds their weight, plays their part the best that they can play it, we're gonna sound good," he says. "We've actually been achieving a great beginner band sound, in my opinion."

The day before their first parade, Harper gave the band a pep talk and reminded them to wear deodorant.

He offered other bits of advice: "Don't overblow," and "Only play the notes you know."

Mardi Gras is a strenuous time with over two weeks of nonstop parades. Music and choreography must be memorized, and bands typically battle one another informally for supremacy. There are few formal competitions; instead, performances are recorded and posted on YouTube. 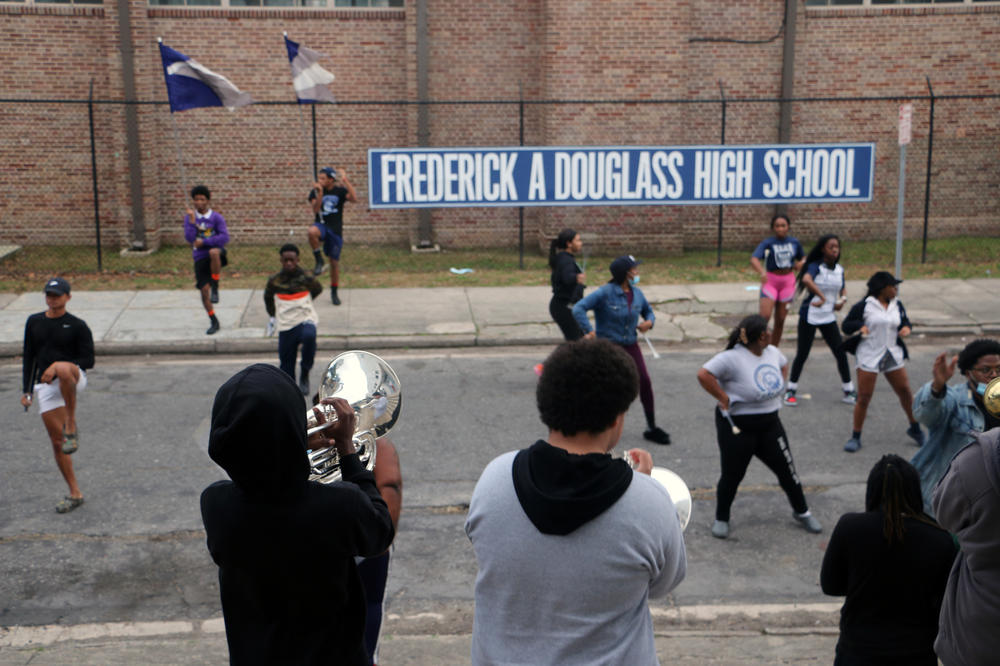 The band at Frederick A. Douglass High School practices outside of the school. The band had no members when director Jordan Harper took it over at the start of the school year. / WWNO

Jalani Smith, a senior at Douglass and the band's drum major, says his goal heading into parade season was to make sure the crowd had a good time.

Drew Crosby, the drum major at Warren Easton says when the crowd is feeling good, so is he. He likes when the crowd engages with the band, dancing to the music and urging them to march higher and play louder. 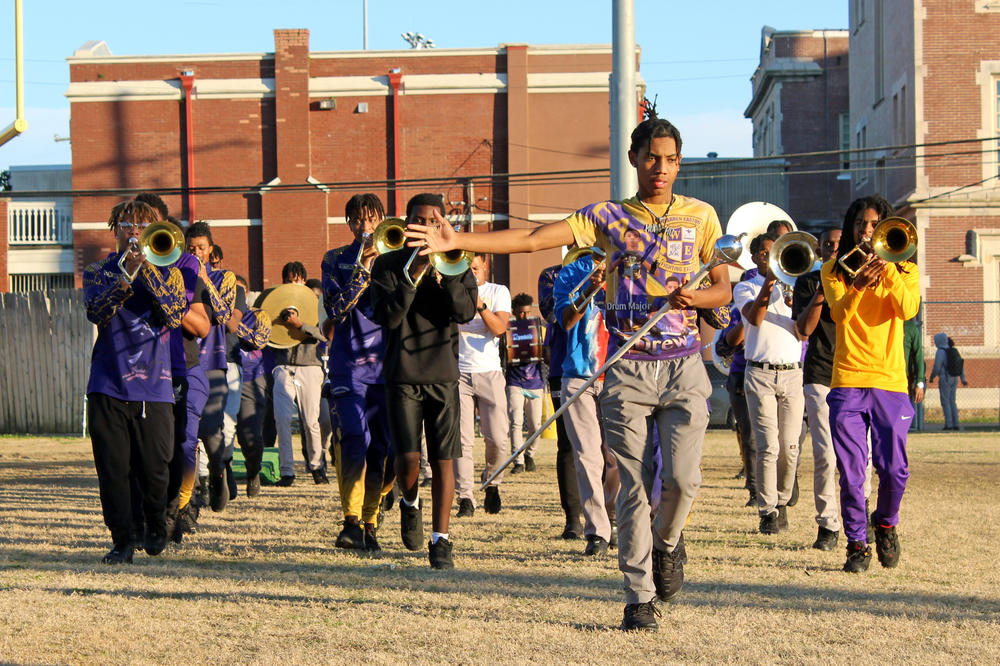 Drew Crosby, the drum major at Warren Easton, says that when the crowd is feeling good, he does, too. / WWNO

"[There's] a lot of negative energy in New Orleans going on right now," Crosby says. "I just feel like [band] really makes us feel safe and makes us feel like a place we really want to be."

Violent crime has been high in recent weeks, and multiple teenagers and children in New Orleans have died from gun violence. Crosby says that over the years, band has kept him focused on school and his community.

"I just tell everyone I love them because I do," he says. "Band changed all our lives, honestly."

At Warren Easton's first parade of the season, the band made themselves known by chanting, "Here comes the purple and gold." They played with precision for hours, the drummers nonstop. 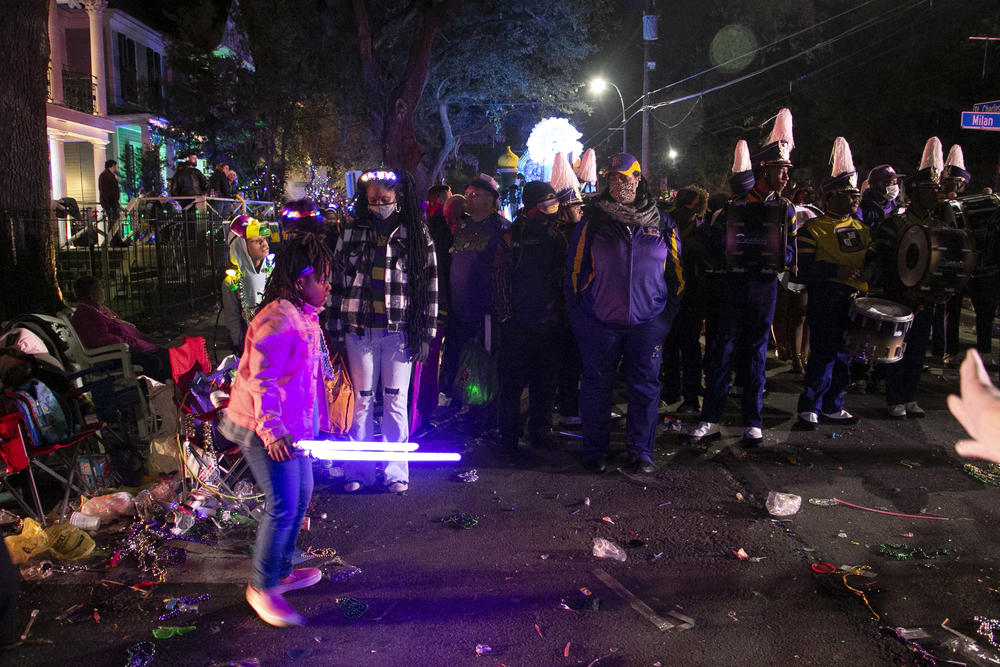 Children in the crowd along the three and half mile route grasped light-up and invisible drum sticks and played along to the beat. / WWNO

The crowd enthusiastically welcomed the band back; children in the crowd along the three-and-a-half-mile route grasped invisible drumsticks and played along to the beat. And Crosby led with a silver scepter in hand, raising his knees almost to his chest, his whistle conjuring band director Asia Muhaimin's magic moment over and over again. 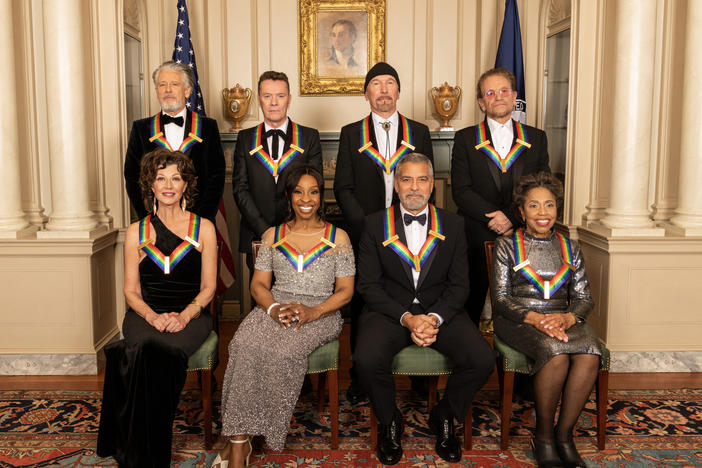 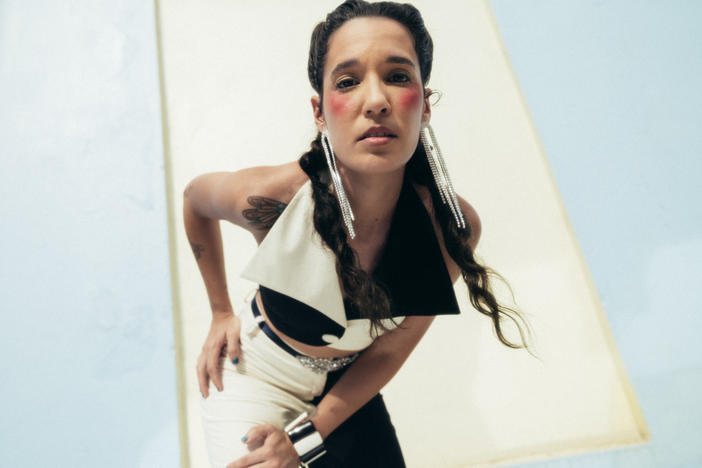 The Puerto Rican artist returns with a new album, her first since protests galvanized San Juan and beyond in 2019. 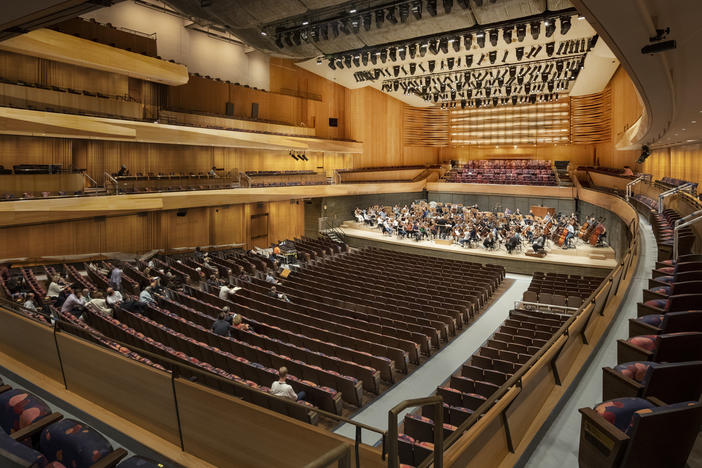 Stripped to the bones: Why a new NYC concert hall sounds so much better

The new David Geffen Hall in Lincoln Center, home of the New York Philharmonic, opens this week. And while the outside is the same, everything inside has changed.