Democrat critics of the bill say that it is unnecessary and harmful to transgender children’s mental health. Sen. Michelle Au (D-Johns Creek) said that SB 435 contradicts the focus on mental health bills in the legislature.

“I cannot support this piece of legislation, and neither should you, because I've heard a lot this session about advocating mental health,” Au said, speaking against the bill. "I've heard a lot this week about standing up for the rights of our children and their families and allowing parents to make the best choices for their own kids. We need to prioritize mental health for all Georgians, stand up for the rights of all our children and their families. Not just the ones that look like ours."

Sports teams would verify the child’s assigned sex at birth through their birth certificate. However, Democrats expressed concern that intersex children could be caught in the middle of the debate, as they might not be assigned “male” or “female” at birth.

Sen. Kim Jackson (D-Stone Mountain) and Sen. Elena Parent (D-Atlanta) said that other confusion could occur for adopted children who were issued a birth certificate long after birth.

Sen. Sally Harrell (D-Atlanta) is a mother of a transgender child. In tearful testimony, she said that it was difficult to talk to her child about the bill. She urged her colleagues to vote against it.

“This feels premature, and this feels judgmental,” Harrell said.

Parent agreed that the bill seemed judgmental and said it went against some of the core lessons children learn through sports.

“And let's talk about the characteristic that underlies sportsmanship: It's empathy," she said. "The ability to put yourself in someone else's shoes, that's why you don't celebrate when someone else is having a hard time.

"I can't find a shred of empathy in this bill,” she said.

Democrats questioned the vague language of the bill and say it could be used to legally challenge girls participating in boys’ sports.

The bill’s presenter Sen. Marty Harbin said that it is “simply not fair” for cisgender girls to compete against children assigned male at birth.

The bill would also allow for parents of student athletes to file a grievance to a designated employee if they suspected that a transgender athlete was in their child’s league.

Senate Bill 435 passed the Senate 34 to 22 in a party-line vote and now goes to the House for review. 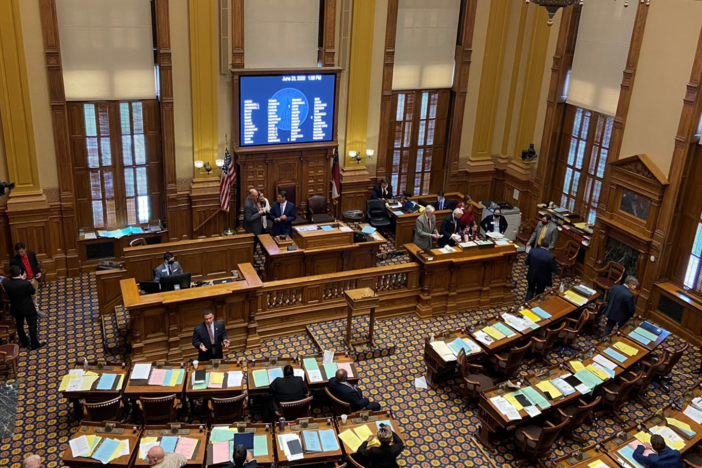 Thursday on Political Rewind: A look at the slate of legislation in the General Assembly. Among those bills, we discussed a proposed parental "bill of rights” for Georgia schools. Gov. Brian Kemp said the legislation would allow parents a more active role in their child’s education, but critics warn the bill could cause a chill on free speech. Republican governors of other states, like Gov. Ron DeSantis in Florida, are pushing similar legislation.