Federal prosecutors are arguing that, from left, Travis McMichael, his father Gregory McMichael, and William "Roddie" Bryan Jr. are guilty of a hate crime in the death of Ahmaud Arbery, whose murder they were convicted of in state court.

The three white men who were convicted of murdering Ahmaud Arbery, a Black jogger whose shooting death in 2020 sparked protests and calls for racial justice, had histories of making racist comments and slurs in text messages, a federal prosecutor said in court Monday.

A multiracial jury was seated in the federal hate crimes trial of the three men as defense attorneys admitted their clients had used offensive language and opinions about Black people.

But the defense attorneys insisted the three men's pursuit of the 25-year-old was prompted by "honest, though erroneous, suspicion" that he "committed crimes" and not solely based on his race, The Associated Press reported.

"I'm not going to ask you to like Travis McMichael," said Amy Lee Copeland, the defense attorney for the man who fatally shot Arbery, AP reported.

McMichael, along with his father, Greg McMichael, chased Arbery in their pickup truck after he ran past their Brunswick, Ga., home on Feb. 23, 2020.

Both men said they believed Arbery might have been the person responsible for a recent string of break-ins in their Satilla Shores neighborhood. A neighbor, William "Roddie" Bryan, joined the McMichaels in the pursuit.

At one point, Travis McMichael and Arbery got into a fight, and McMichael fired his shotgun at Arbery, killing him. Arbery's family members called the killing, which was captured on video by Bryan and later leaked to the public, a "modern-day lynching."

The federal proceeding, which will examine whether race was a factor in the killing, begins one month after the three men were sentenced to life in prison in a separate murder trial in Georgia state court. A jury there found the trio guilty of felony murder and other charges in connection with Arbery's death.

Federal prosecutor Bobbi Bernstein said Monday that Travis McMichael repeatedly used the N-word, and other words that describe Black people as being something less than human.

Bernstein said there will be testimony that Greg McMichael, a former police officer and district attorney's office investigator, had ranted about Black people being "nothing but trouble" and posted memes on social media that supported vigilantism — suggesting that it's better to have a loaded gun than to call the police.

Additionally, Bernstein said the third defendant, William "Roddie" Bryan, had also used the N-word and other slurs, in one instance, after learning that his daughter was dating a Black man. She said Bryan commented that his daughter "has her n——-r now," according to AP.

Bernstein told the jury "If Ahmaud Arbery had been white, he'd have gone for a jog, checked out a cool house that was under construction and been home in time for Sunday dinner. Instead, he ended up running for his life."

Earlier Monday, U.S. District Judge Lisa Godbey Wood seated of 12 jurors and four alternates — down from a pool of about 1,000 potential jurors who were called last week.

The court said eight of the jurors are white, three are Black and one is Hispanic. Of the four alternate jurors, the court identified three as white and one as Pacific Islander. The jury in the state murder trial was almost entirely white, with just one Black juror. 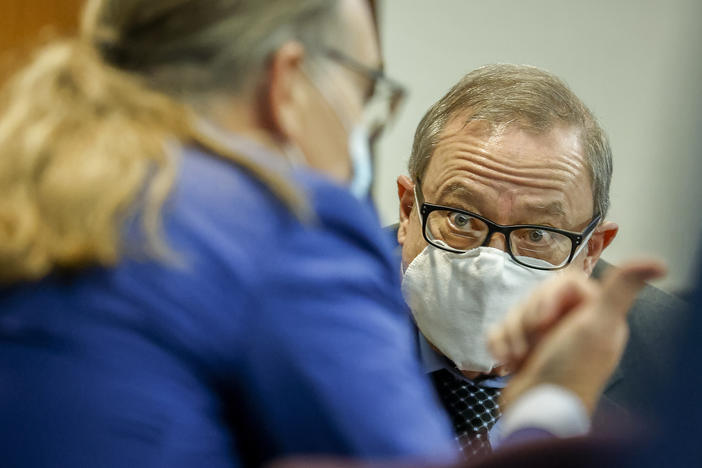 Prosecutors relied heavily on racist evidence from cell phones and testimony from acquaintances, but the defense called only one witness.

Travis McMichael, who pulled the trigger, and his father, Greg, have no chance for parole. A federal hate crimes trial remains in a case widely seen as racially motivated.