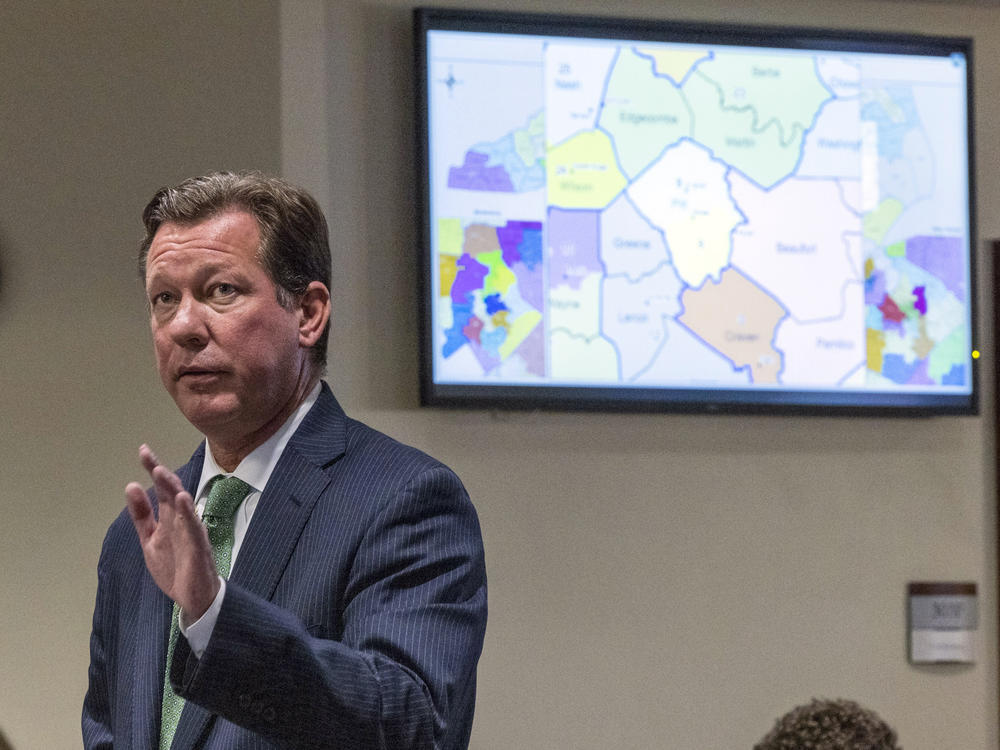 Phil Strach, an attorney for Republican legislators speaks during a partisan gerrymandering trial on Jan. 5, 2022, at Campbell University School of Law in Raleigh, N.C. A divided North Carolina Supreme Court struck down the state's new maps for congressional and General Assembly seats on Friday. / The News & Observer via AP, File

By a 4-3 decision — with the justices who are registered Democrats making up the majority — the state's highest court directed the GOP-controlled legislature to redraw the plans by Feb. 18 and provide an explanation of how they calculated the partisan fairness of the new boundaries. Any replacement maps would still be used for the May 17 primaries.

The court's decision reversed a ruling last month from a panel of three trial judges that let the maps stand, and declared partisan gerrymandering found in the redistricting approved by the legislature in November violated several provisions in the North Carolina Constitution. They include the right to free elections, freedom of speech and equal protections of citizens.

The legislature violates the constitution "when it deprives a voter of his or her right to substantially equal voting power on the basis of partisan affiliation," read the order of the court's majority, signed by senior Associate Justice Robin Hudson. "Achieving partisan advantage incommensurate with a political party's level of statewide voter support is neither a compelling nor a legitimate governmental interest."

The trial judges had found ample evidence that the legislature approved maps that were "a result of intentional, pro-Republican partisan redistricting." But they declared it wasn't the judiciary's place to intervene in mapmaking — a duty left to the legislature — when partisan fairness in those plans was challenged.

Friday's ruling is a major victory for state and national Democrats and their allies who had invested greatly in overturning the maps. It could also make it harder for Republicans to retake control of the U.S. House this fall. A group associated with the National Democratic Redistricting Committee — led by former U.S. Attorney General Eric Holder — supported a bloc of voters who sued.

Democratic Gov. Roy Cooper can't use his veto stamp to block redistricting plans, but he filed a brief urging the Supreme Court to throw out the maps.

The lawsuits were bolstered by mathematicians and electoral researchers who presented evidence of their analysis of trillions of map simulations. They testified the new lines were likely to give the GOP 10 of the state's 14 U.S. House seats as well as state House and Senate majorities in almost any political environment. Republicans currently hold an 8-5 seat advantage. The state gets a 14th seat this year because of population growth reported in the census.

"This is the justice we sought when we filed this lawsuit," said Carrie Clark, executive director of the North Carolina League of Conservation Voters, which was another plaintiff. "With new, constitutional maps, North Carolinians will have a fighting chance to elect a government that fulfills their desire for environmental justice and climate action."

Chief Justice Paul Newby, a Republican writing a dissent, said the court's majority "tosses judicial restraint aside, seizing the opportunity to advance its agenda" with a partisan bias.

"By choosing to hold that partisan gerrymandering violates the North Carolina Constitution and by devising its own remedies, there appears to be no limit to this court's power," Newby wrote. The court's other two Republicans — Associate Justices Phil Berger Jr. and Tamara Barringer — joined with Newby.

Republican legislators who were sued wanted the trial judges' ruling to stand, saying a state Supreme Court decision from the early 2000s said partisan advantage can be considered in mapmaking. They said the redistricting process had been transparent and prohibited the use of racial and political data.

GOP legislators criticized Friday's ruling, with Senate redistricting committee co-chair Ralph Hise calling it a "perverse precedent" that "once set, will be nearly impossible to unwind."

The plaintiffs argued that the enacted maps thwarted the will of the people, and that the boundaries should produce political outcomes more in line with competitive statewide elections over the past decade.

They were particularly unhappy with GOP efforts to carve up Democratic anchors of Guilford and Mecklenburg counties into three U.S. House districts apiece. Five of those six districts were considered Republican-leaning as the urban voters were attached to conservative, rural voters.

Friday's majority order also directed lawmakers to use election and population figures to determine whether racially polarized voting is sufficient in areas to require the drawing of districts that protect Black voting strength.

State Democratic Party Chair Bobbie Richardson, who is not a plaintiff, called the ruling "a critical and momentous step towards maps that protect the fundamental right to vote."

It was a North Carolina U.S. House map approved in 2016 that became the subject of a landmark 2019 U.S. Supreme Court decision on partisan gerrymandering. A majority of justices declared that while federal courts aren't the place to settle partisan gerrymandering disputes, state courts could adjudicate these matters. 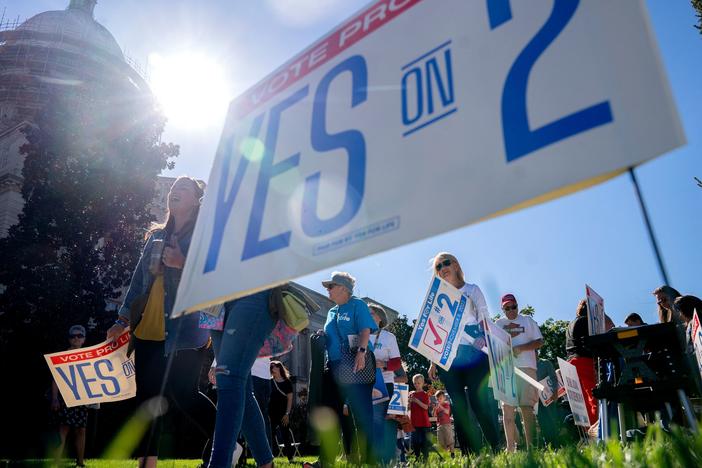 Abortion is on the ballot in California, Kentucky, Michigan, Montana and Vermont, but it's also playing a major role in races for governor, attorney general and state supreme courts nationwide. 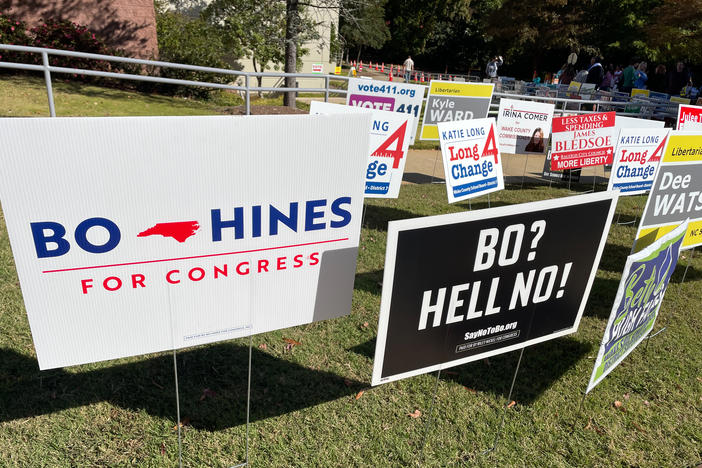 A Trump-endorsed Republican and a Democratic state senator are facing off in a congressional race that could help decide control of the House of Representatives. 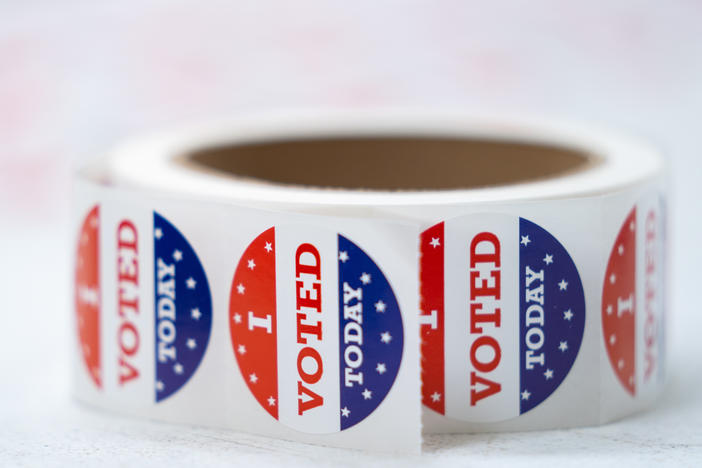 In a time of national division, polarizing primaries are part of the problem

It is said the best medicine for what ails democracy is more democracy. But what does more democracy mean? If it just means more of the kind of politics we have now then it hardly offers a remedy.