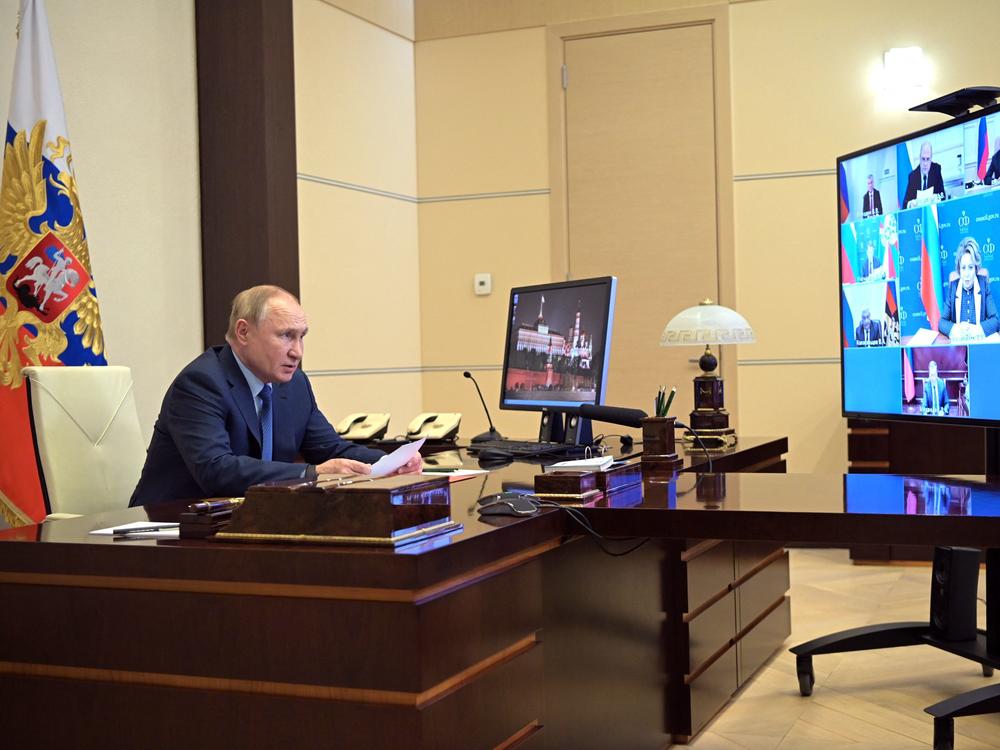 Russian President Vladimir Putin chairs a meeting with members of the U.N. Security Council via a videoconference at the Novo-Ogaryovo state residence outside Moscow on Friday.

With more than 100,000 Russian troops circling the Ukrainian border, prompting formal diplomatic engagement from the United States and NATO, a 30-year-old foreign policy debate has made a return to center stage.

The question: Should NATO, the mutual defense pact formed in the wake of World War II that has long served to represent Western interests and counter Russia's influence in Europe, expand eastward?

NATO's founding articles declare that any European country that is able to meet the alliance's criteria for membership can join. This includes Ukraine. The U.S. and its allies in Europe have repeatedly said they are committed to that "open-door" policy.

But in the words of Russian President Vladimir Putin, NATO's eastward march represents decades of broken promises from the West to Moscow.

"You promised us in the 1990s that [NATO] would not move an inch to the East. You cheated us shamelessly," Putin said at a news conference in December.

The U.S. says a ban on expansion was never on the table. But Russia insists it was — and now, Putin is demanding a permanent ban on Ukraine from joining the pact.

"Unsurprisingly, when you look at the evidence, what happened is somewhere in between," said Mary Sarotte, a post-Cold War historian whose book about those negotiations, Not One Inch: America, Russia, and the Making of Post-Cold War Stalemate, was published last fall.

What is the origin of Putin's "not move an inch" claim?

For the first four decades of NATO's existence, the treaty represented the U.S., Canada and America's closest allies in Western and southern Europe. On the other side of the Iron Curtain were the Soviet Union and its allies in Central and Eastern Europe, including the former East Germany.

But that long-standing divide was challenged in 1989 when anti-communist protests spread across East Germany and other countries in Central and Eastern Europe.

Early in the effort to reunify Germany, U.S. officials wrestled with the question of Soviet control of the east: What could entice Soviet leader Mikhail Gorbachev to withdraw?

"The Americans guess that maybe what Gorbachev wants in exchange for letting Germany unify is a promise that NATO will not expand eastward," Sarotte said. "And so Secretary of State [James] Baker, in a speculative way in an early stage of negotiations, says to Gorbachev, 'How about this idea: How about you let your half of Germany go, and we agree to move that one piece forward?' "

There is some disagreement about what took place during the Baker-Gorbachev talks in February 1990. Some say that when Baker suggested that NATO shift not "one inch" to the east, he intended to refer only to East Germany, because neither side had begun to think about NATO expansion beyond that.

Seemingly conflicting comments from U.S. officials and Gorbachev made years later do not help clear this up. (Former U.S. Secretary of State Condoleezza Rice said as recently as Friday that "nobody was even imagining Czechoslovakia or Poland or Hungary at that time.")

The historical record shows otherwise, according to Sarotte. Contemporaneous notes, letters, speeches and interviews show that Western leaders were, in fact, already contemplating NATO enlargement by the time the February 1990 talks took place, she says.

What is not in dispute: Gorbachev later agreed to withdraw from East Germany in exchange for financial concessions, in a treaty that did not place limits on the future expansion of NATO.

"But there's this residual bitterness afterwards. Still, to this day, Putin is saying, 'Look, there was this other offer on the table, right?' " Sarotte said. "And that's sort of factually accurate in a narrow sense, but it doesn't reflect the reality of the treaty."

Why did the West want to enlarge NATO, and how did Russia react?

When the Soviet Union collapsed in 1991, the NATO expansion question became more urgent — both for the U.S. looking to cement its influence in Europe and for countries emerging from communist control, like Poland, Hungary and the Czech Republic.

From the beginning, Russia strongly objected to NATO's borders creeping closer to its territory. In 1997, Russian President Boris Yeltsin tried to secure a guarantee from President Bill Clinton that NATO would not add any former Soviet republics. Clinton refused.

The U.S. hoped that its financial support, along with diplomatic overtures from NATO, could be enough to counterbalance Russia's displeasure over expansion — but ultimately, that didn't work, Goldgeier said.

Over the course of the 1990s and early 2000s, NATO expanded three times: first to add the Czech Republic, Hungary and Poland; then seven more countries even farther east, including the former Soviet republics of Estonia, Latvia and Lithuania; and finally with Albania and Croatia in 2009.

"Obviously, the more it did to stabilize the situation in central and Eastern Europe and bring them into the West, the more it antagonized the Russians," he said.

Why is Ukraine important?

Ukraine, as the largest former Soviet republic in Europe besides Russia itself, has been a key part of alliance talks since it declared independence from the USSR in 1991. In the three decades since, NATO expansion has put four members on Ukraine's borders.

"The Russians were always concerned about how far NATO enlargement was going to go. It's one thing for Poland to come in, or the Czech Republic to come in. That's not such a big deal. But there was always a concern about Ukraine," Goldgeier said. 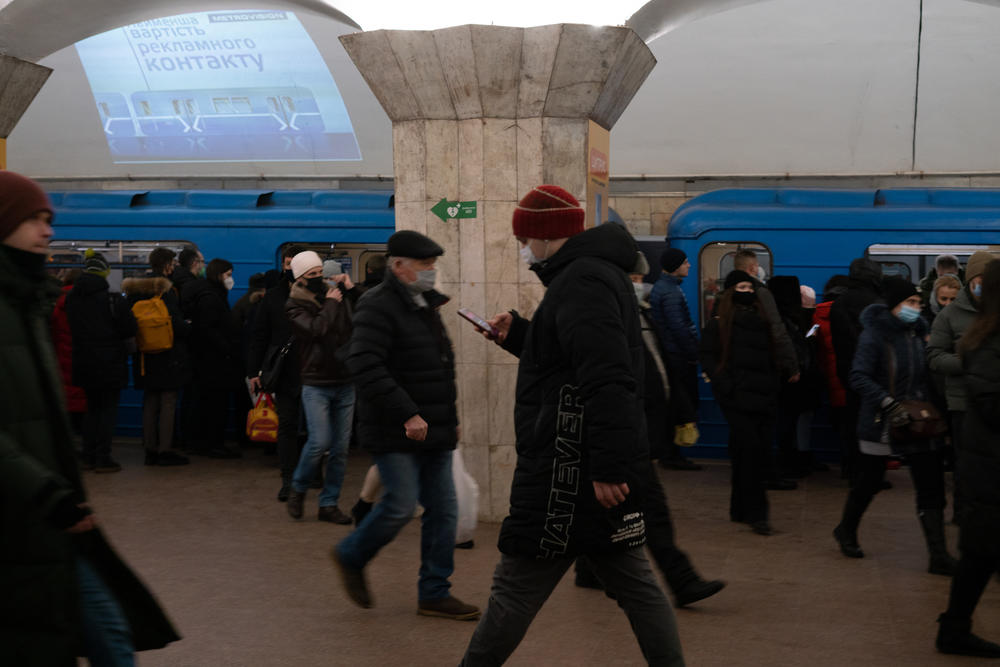 People going about their day in the Ukrainian capital, Kyiv, earlier this week. More Ukrainians have been looking toward the West as Russia has become aggressive.

Putin himself has long said that he believes Ukrainians and Russians to be a single people, unified by language, culture and religion. In July 2021, he wrote a long essay about the "historical unity" between the two nations.

For the U.S. and its Western allies, a successful and independent Ukraine was a potent potential symbol that Russia's time as a powerful empire had come to an end.

During the early 2000s, President George W. Bush pushed for Ukraine to become a NATO member. France and Germany opposed it, fearing escalation with Russia.

The result was a "worst of all worlds" compromise in 2008, Goldgeier said: a promise that Ukraine would eventually join NATO, but without any concrete timeline or pathway to do so.

When the compromise was announced, some analysts were surprised that "there was not this major temper tantrum" from Putin and Russia, said Rose Gottemoeller, an American diplomat who served as deputy secretary general of NATO from 2016 to 2019.

Why has this come up again now?

Ukraine cannot imminently join NATO. Aspiring members are asked to meet various conditions before they are allowed to begin the process of joining via a "Membership Action Plan." NATO allies have not yet granted that to Ukraine — and have long appeared uninterested in offering, in part because of political complications with Russia.

Now, Russia's protests over Ukraine's future membership have put the U.S. and NATO in a difficult spot over NATO's "open-door" policy.

"The louder Moscow protested, the more determined western capitals became to deny Russia what was seen as a veto over alliance decision-making," Samuel Charap, a Russia specialist at Rand Corp., wrote in the Financial Times earlier this month.

And the more Putin has tried to control Ukraine and its foreign policy, the more he has pushed Ukrainians themselves to look toward the West, experts said.

Russia's annexation of Crimea from Ukraine in 2014 was a major turning point. Afterward, popular support for joining NATO rose among Ukrainians, who had once been more ambivalent about the alliance.

"Putin has constructed in his head and in his heart, perhaps, the idea that NATO is encircling him, that that has always been the intention," said Rice, speaking at a Council on Foreign Relations panel on Friday. "Ukraine is moving closer to the West — but it's doing it because the Russians have been annexing Ukrainian territory and threatening the Ukrainians."

(In annexing Crimea, Russia itself broke a promise: In the Budapest Memorandum, a treaty Russia signed with the U.S. and U.K. in 1994, it committed "to respect the independence and sovereignty and the existing borders of Ukraine" in exchange for Ukraine's denuclearization.)

None of that has deterred Putin, for whom Ukraine is "personal," says Andrea Kendall-Taylor, a former senior U.S. intelligence officer now with the Center for a New American Security.

"Putin, over his 22 years now in power, has tried and failed repeatedly to bring Ukraine back into the fold. And I think he senses that now is his time to take care of this unfinished business," she told NPR's Weekend Edition Sunday.

With the U.S. internally divided over domestic politics and Germany's new government not yet settled on policy positions after the departure of longtime Chancellor Angela Merkel, Putin "senses that this is a good time to push matters," said Sarotte.

"He's basically holding Ukraine hostage to force a do-over of these NATO expansion battles," she said. 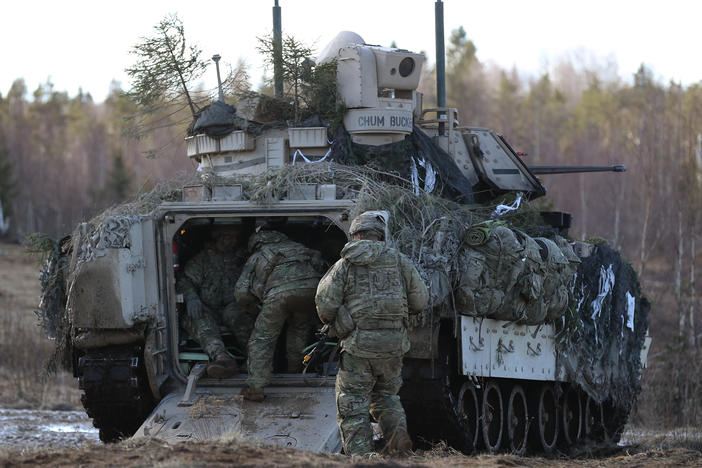 The U.S. is placing 8,500 troops on alert for possible deployment to Eastern Europe

The Pentagon said no final decision has been made, but Defense Secretary Lloyd Austin wanted U.S. forces to be ready "just in case" of a Russian invasion of Ukraine. 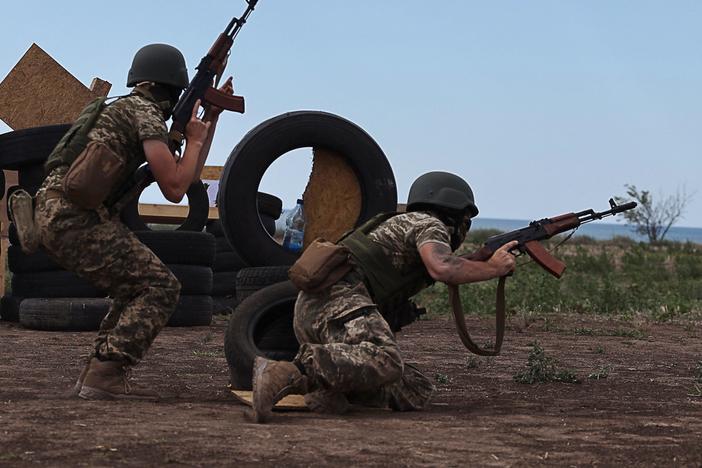 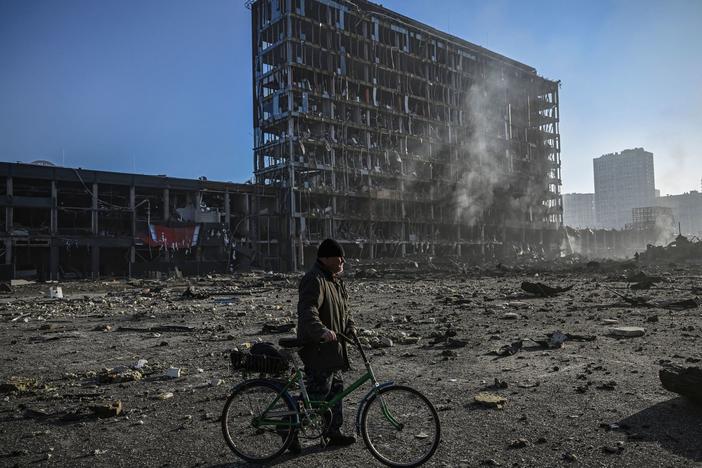 A month into the Russia-Ukraine war: What happened today (March 24)